Americans want to modernize NATO defenses at the expense of Poland 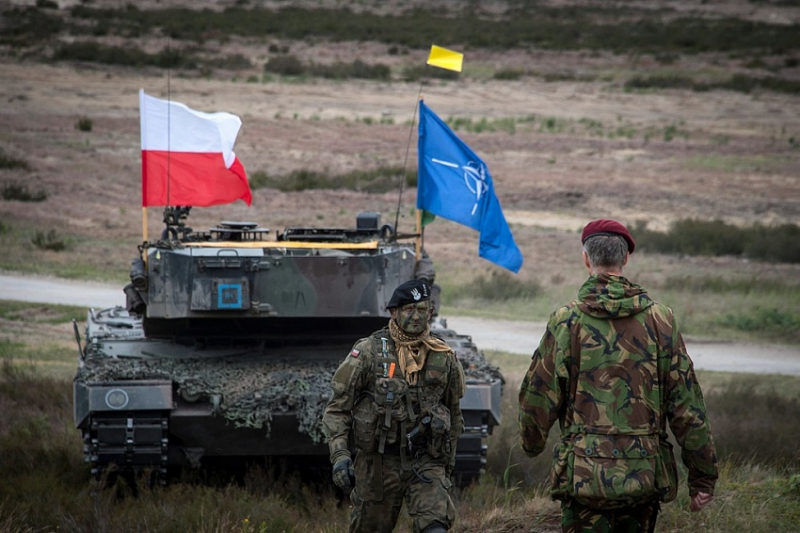 The Military Review quite often publishes geopolitical and military reviews in various regions of the world. Whenever possible, we are talking not only about our plans, but also about the planning of the other side. This is done so that there is an understanding that there can be several response options, and dwelling on one of them is not just stupid, but also criminal.

The country's defense is not a topic where you can experiment and allow discounts on the stupidity of the enemy. In principle, there are no stupid opponents. There are their mistakes, which we push them to. However, the other side is doing the same.

Most recently, we published a material on the results of the Winter-20 military exercises in Poland. Earlier there were materials about NATO's plans in relation to Russia. An article by the American analyst, journalist, columnist for The National Interest, John Rossomando, became a kind of response to such materials. The article, I must say, aroused quite a keen interest among specialists in Russia.

John Rossomando analyzes the results of the Zima-20 exercise. And he comes to exactly the same conclusion as our experts. NATO has no chance in the event of the start of real hostilities in the Baltic States and Poland. As an American expert writes,

"Russia will simply tear NATO apart."
By the way, he also mentions what we wrote about. The presence of the planned purchases of the fifth generation F-35 aircraft, Patriot missile defense systems and HIMARS multiple launch rocket systems at the exercises from the Polish army. That is, with the available forces, Poland will not be able to withstand the Russian and Belarusian troops for any long time.

"In the event of a war, the Russian and Belarusian armies will seize NATO territory along the border and thereby rip the alliance forces in half, which will sever the logistics hubs connecting Poland and Lithuania."
And the conclusion of the American journalist is quite predictable.

Poland immediately begin to purchase the most modern weapons from the United States and maximize the presence of American troops on its territory. Simply put, it is necessary at the expense of the European state to provide orders for the American military industry.

The listing of Russian weapons, which must be neutralized by the Polish army in the near future, looks rather ridiculous.

“Russia has strengthened and modernized the Western Military District, in which“ the most competent military units ”of the country are concentrated, equipped with modern tanks T-90, T-72B3M, armored personnel carriers BTR-82, BMP-3, as well as complex air defense systems, including anti-aircraft systems "Tunguska", "Pantsir-S1" and S-400 ".
The military analyst is really offended that NATO, outnumbering Russia in almost all components, from the number of personnel to the economic power of the alliance states, is actually not ready to successfully wage a war in the east.

We urgently need to change everything, otherwise ...

Naturally, after listing all the "nasty things from Russia" prepared for the West, the author could not but indicate the paths that the generals of the bloc should follow in order to adequately protect European civilization from the Eastern barbarians.

To begin with, John Rossomando recommended changing the very concept of the war with Russia. The classic declaration of war, preparation of units for the offensive, concentration on the borders of warehouses with ammunition and fuel and other measures that must be taken before the offensive will not be carried out.

"Simultaneously on land, at sea, in the air, in space and in cyberspace."
Accordingly, the

"From the first hours, nuclear facilities, the most combat-ready military units, defense systems, energy facilities, communications, military and state administration, reconnaissance and combat control systems should be put out of action."
If you're playing some kid's war game, the plan is fine. Airplanes, rockets, drones, space satellites and everything, everything, everything ...

Only there is one problem - Russian air defense and missile defense. And no one removed the most advanced electronic warfare systems from dangerous directions. Not to mention the fact that in the sky there will not be whipping boys on ancient aircraft, but combat pilots, at least not inferior to Western ones.

Another piece of advice from an American journalist looks no less impressive.

Cold War supply lines are urgently needed. Some ignorance of the political geography of that time is forgivable for an American. There is no OVD, which means it never existed.

But it is not clear what means the Europeans are offered to practically recreate the military infrastructure.

Reading American analysts and experts, as well as European ones, one is always amazed at their confidence that the next war, if it comes to that, will be a continuation of the Second World War. The main hostilities will be conducted mainly on the territory of Russia. The territory of the United States will remain untouched by the war. Europe is capable of crushing Russia on its own. And so on.

Even more striking is the unwillingness to read the enemy's military doctrine. For some reason, most analyzes are based on the fact that Russia will not start hostilities before striking its territory. Meanwhile, our doctrine provides for such a possibility.

In the event of a real danger to the country, we will strike first.

Moreover, the we can even inflict a nuclear strike on the enemy as part of preventive actions when there is a real danger to the country.

And that we have weapons that are guaranteed to inflict significant damage on the territory of the United States and any other country, potential adversaries also know.

И there will be no territories free from war.

No country will have a strong rear.

The modern concept of even a local war speaks of the obligation to destroy not only the Armed Forces, but also the military industry and infrastructure.

It is very strange that the European countries - members of the alliance do not understand simple truths.

Military rhetoric, an arms race, NATO's eastward advance, entails a response from the opposing side.

And any error of the system, the human factor, as well as provocation can turn out for our planet not only destruction and death of a certain number of people, but also the disappearance of entire states and peoples.

Ctrl Enter
Noticed oshЫbku Highlight text and press. Ctrl + Enter
We are
The tragedy of the American army ("The Atlantic", USA)Bashar al-Assad: In Syria, not the “revolution” that the enemies are talking about, but the revolution of the army and the people against terrorists
Military Reviewin Yandex News
Military Reviewin Google News
25 comments
Information
Dear reader, to leave comments on the publication, you must sign in.