Why Alexander I did not want to solve the "Polish question" 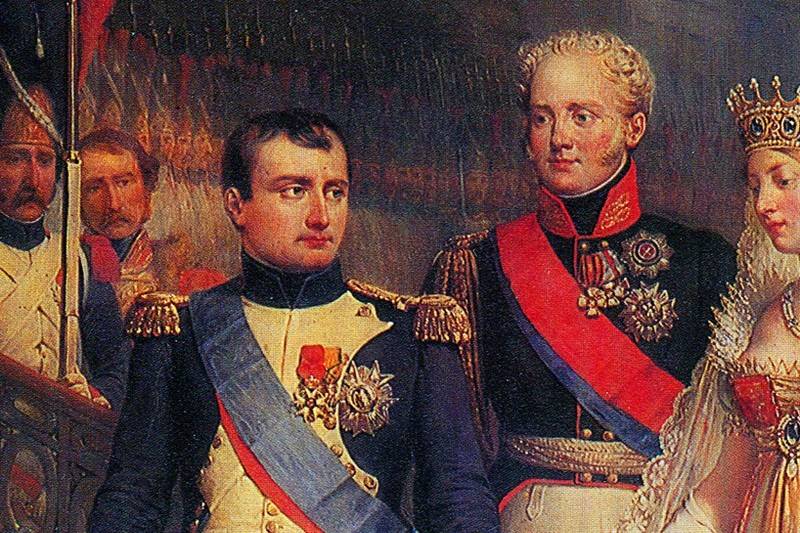 In this article I will try to prove that Napoleon I in no way wanted the restoration of the Commonwealth, but, on the contrary, tried in every possible way to solve the "Polish question" with Russia, but Alexander I, apparently, did not want this and tried to use it as justifying the next offensive war against France.

Was the restoration of Poland part of Napoleon's plans?

With the creation of the Grand Duchy of Warsaw in 1807, the opinion of high society about France deteriorated significantly. The nobles were extremely afraid of the restoration of the Commonwealth. First of all, they were afraid for their own pocket.

“The new constitution of the Duchy of Warsaw says that no one has the right to own serfs.

And with one stroke of the pen, the nobles are almost deprived of their property.

One can fear that this epidemic will spread in our country as well.

This will be a terrible blow to Russia. "
Indeed, the Russian landowners have greatly enriched themselves at the expense of the partition of Poland. Only in the territories of the Belarusian provinces for 1772-1800. 208505 “showers” ​​were distributed to their property.

Among these landowners we see such noble and popular families as the Kutuzovs, Rumyantsevs, Repnins, Suvorovs, etc. Obviously, the possibility of Napoleon's restoration of the Polish-Lithuanian Commonwealth terrified most of the nobility.

But did Napoleon really want this?

We must understand that in this case Bonaparte would forever quarrel with Russia, Austria and Prussia - participants in the sections of 1772, 1793 and 1795. This was clearly not part of the plans of the French emperor.

Napoleon never directly announced to the Poles his intention to revive their homeland. He never said this to his closest people. Most likely, he only used the Poles as a human resource, inspiring them in every possible way, but at the same time without taking on any obligations. 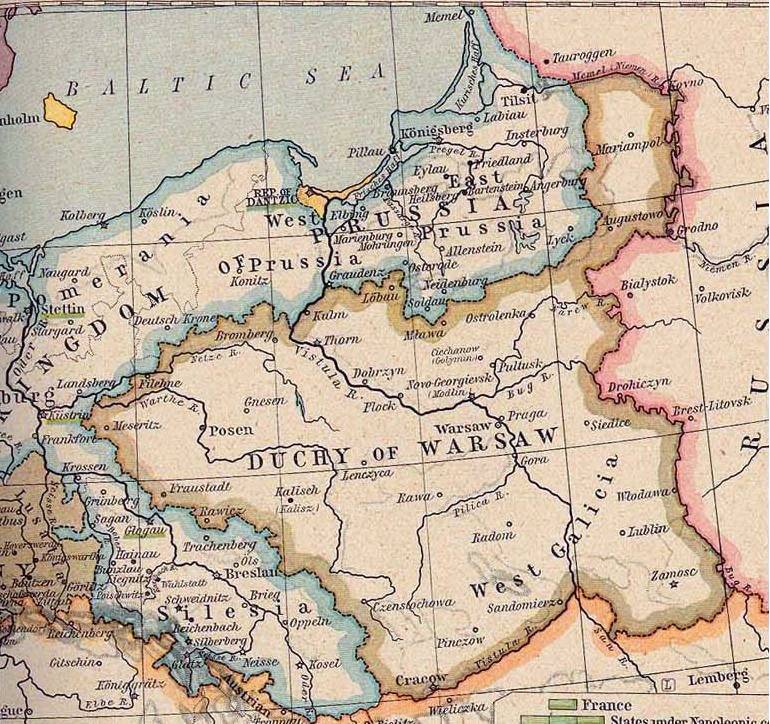 Map of the Duchy of Warsaw after the Peace of Schönbrunn

Problems around the convention

Bonaparte was well aware of the danger posed by inaction in relation to the "Polish question".

On October 21, 1809, a note was handed to the French ambassador in St. Petersburg, which required the conclusion of a special convention on this issue.

Also, the Minister of Foreign Affairs of France sent a letter to St. Petersburg, in which it was said that the Emperor of the French

"Not only does he not want to discover the idea of ​​the restoration of Poland, which is so far from its forms, but is ready to assist Emperor Alexander in all those measures that could forever destroy any memory of her."
Alexander's terms were relatively acceptable. He demanded that the question of the restoration of Poland should never arise, the abolition of the words "Poland" and "Poles" from all state documents, the abolition of Polish orders and the consideration of the annexed part of Galicia to the Duchy of Warsaw as a province of the Saxon king.

On December 23, 1809, the convention was signed, after which it was sent to Paris for ratification. It would seem that the problem has been resolved.

I leave to the reader the main points of this convention:

"Art. 1: The Kingdom of Poland will never be restored.

Art. 3: Awards belonging to the former Polish kingdom are abolished and will never be restored ...

Art. 5: It is established as the most important, unchanging principle that the Duchy of Warsaw has no right to receive any territorial expansion at the expense of lands that once belonged to the Kingdom of Poland. "
Napoleon never imagined that the convention would be drawn up so insulting to his honor and the Poles themselves. He agreed with all the points, but their wording raised questions. Moreover, the convention would oblige the emperor of the French to take on unnecessary obligations in the event of a desire to restore the Polish-Lithuanian Commonwealth by any third country.

“It would be unreasonable and incompatible with my honor to make an irrevocable and all-encompassing commitment that the Kingdom of Poland will never be restored.

If the Poles, taking advantage of favorable circumstances, rise up as one and oppose Russia, then I will need to use all my strength to pacify them - is that right?

If they find themselves allies in this matter, then will I need to use my strength to fight these allies?

It means demanding from me the impossible, dishonorable and, moreover, completely independent of my will.

I can argue that no assistance, either directly or indirectly, will be rendered by me to any attempt to rebuild Poland, but nothing more.

As for the destruction of the words "Poland" and "Poles", this is something that is hardly worthy of civilized people, and I by no means can go for it. In diplomatic acts, I still may not use these words, but I am not in a position to eradicate them from the use of the nation.

As for the abolition of the old orders, this can be allowed only after the death of their current owners and the presentation of new awards.

Finally, with regard to the future territorial expansion of the Duchy of Warsaw, it is possible to prohibit this only on the basis of reciprocity and on the condition that Russia undertakes to never annex to its territory a piece that has been torn away from the old Polish provinces.

With these words I can still agree with the convention, but I cannot admit any others. "
It would seem that Napoleon's remarks are quite fair. He drew up a response draft, the points of which were presented in milder terms, but the meaning of this did not change. For example, the first item now looked like this:

"His Majesty the Emperor of the French undertakes not to support any restoration of the Kingdom of Poland, not to give any assistance to any state that would have such intentions, not to give any assistance, either direct or indirect, to any rebellion or indignation of the provinces that made up this kingdom."
Subsequent paragraphs were also slightly changed, but in general the meaning remained the same. Napoleon's editorial staff was in the interests of both Russia and France. Both powers would be pleased.

But this option was rejected by the Russian side.

Alexander, apparently wishing that the project was rejected again, sent a new version of the contract. It contained absolutely the same articles as in the convention signed in December 1809, which were inadmissible. The Russian emperor modified the first article as follows:

“His Majesty the Emperor of the French, the King of Italy, in order to provide his ally and all of Europe with evidence of his desire to take away from the enemies of peace on the continent any hope of destroying it, is obliged in the same way as His Majesty, the Emperor of All Russia, that the Kingdom of Poland will never will not be restored. "
And again this "Polish kingdom will never be restored"! Alexander was well aware that such a formulation could not be accepted by the French side.

Then why, contrary to the interests of his country (after all, Napoleon's edition was quite suitable for both powers, and even the Russian ambassador to France Kurakin admitted that he could not understand the difference between the condition that Poland would never be restored, and the point about that they will never act directly or indirectly in order to restore it), did Alexander insist on his own version with manic persistence? 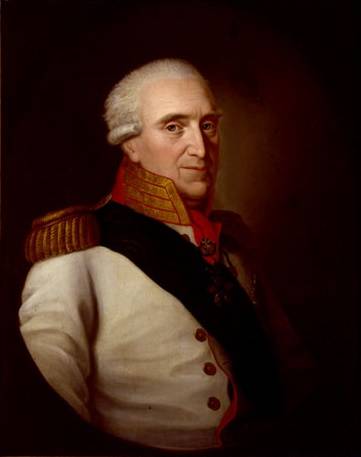 Formally, the ruler of the Duchy of Warsaw was the Saxon king Frederick Augustus I. Napoleon refused to appoint any of his brothers as a duke, as he understood that to plant one of his relatives on the Vistula would mean officially placing France there, therefore, to install it on the borders of Russia and create an opportunity clashes between two states.
To clarify this, it is necessary to conduct a short excursion into Russian-French relations under Alexander I.

Synchronous sources prove that the Russian emperor has been forming a new coalition against France since 1803. At the same time, our country did not have a single reason for confrontation, but on the contrary, Napoleon did everything to make friends with us. The explanation for this can only be found in Alexander's personal envy of Bonaparte. The defeat at Friedland and several other reasons forced the Russian emperor to conclude peace with Napoleon.

But the truly Russian tsar did not want to put up with the emperor of the French. Back in Tilsit, Alexander said to the Prussian king, his ally in the fight against France:

We will take back everything we lost.

He will break his neck.

Despite all my demonstrations and external actions, in my heart I am your friend and I hope to prove it to you in practice. "
It is obvious that Alexander's envy of Napoleon did not disappear anywhere, and even probably intensified. Synchronous sources prove that from 1810 Russia will prepare a new, offensive war against the "Corsican monster" (the reader can learn more about Russian-French relations under Napoleon by going to my article "For whose interests did Russia fight against Napoleon?").

As stated at the beginning, the Russian nobility began to feel a clear antipathy towards France after the creation of the Duchy of Warsaw. So was it not profitable for Alexander, who had long ago decided to fight to the death with Napoleon, to use the anger of the Russian aristocracy?

Was it not profitable for him to feed the fears of the landlords in every possible way in order to justify the next war in their eyes?

The answers to these questions are obvious.

The Russian tsar tried to use the "Polish question" for his own selfish ends.

His plans simply did not include a solution to this problem.

He benefited from the anger of the landowners in order to further intrigue Napoleon.