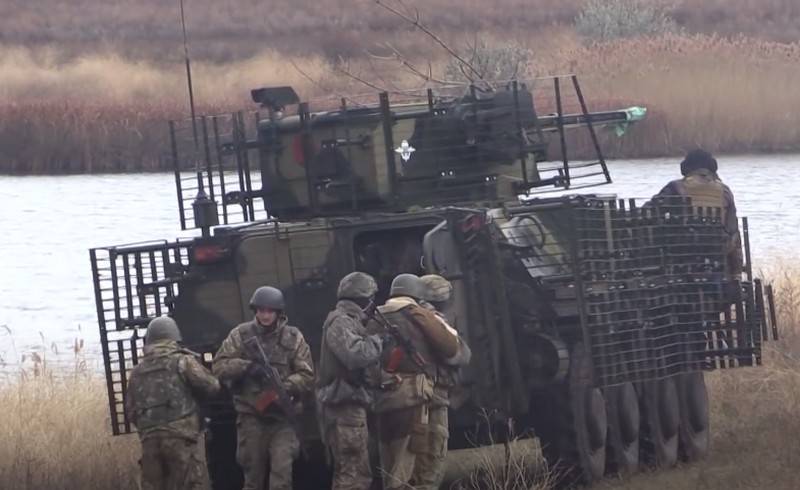 The Ministry of Defense of Ukraine has planned the next military exercises near the Russian borders. According to the country's military department, the exercises of the Ukrainian paratroopers will be held near the Crimean border.


The exercises will take place in March, and will involve units of the Ukrainian landing force. The main task of the exercises is to improve the ability to respond to military threats from the air and from the sea.

In the command of the joint forces of the Armed Forces of Ukraine for the grouping of forces, whose units are holding positions in the southern direction (...), a set of combat training measures is planned. First of all, units must improve the ability to respond in a timely and adequate manner to a military threat both from the air and from the sea.
- said the commander of the Joint Forces Operation of the Armed Forces of Ukraine, Lieutenant General Sergei Naev.

As part of the exercise, the destruction of enemy assault forces from the air will be practiced, as well as the prevention of the landing of subunits of a potential enemy from ships and their destruction.

Meanwhile, the commander-in-chief of the Armed Forces of Ukraine Ruslan Khomchak announced the preparation of troops for the offensive and the conduct of battles in urban settings. According to him, it is necessary to "be prepared for all scenarios of the development of events."

Note that the Armed Forces of Ukraine have repeatedly conducted exercises near the Russian borders, especially often near the Crimea. At the same time, Kiev claims that Russia is preparing for an attack on Ukraine, citing as an example fantastic scenarios for seizing Ukrainian territory, for example, seizing the dam of the North Crimean Canal or breaking through the "land corridor" in Transnistria.

Moscow has repeatedly stated that Russia has no plans to seize Ukraine.
Ctrl Enter
Noticed oshЫbku Highlight text and press. Ctrl + Enter
We are
General of the Armed Forces of Ukraine said it was possible to win the Donbass in less than a dayThe APU general said that the Ukrainian army "showed the enemy the power of its weapons"
Military Reviewin Yandex News
Military Reviewin Google News
48 comments
Information
Dear reader, to leave comments on the publication, you must sign in.