Beggars and begging in pre-revolutionary Russia 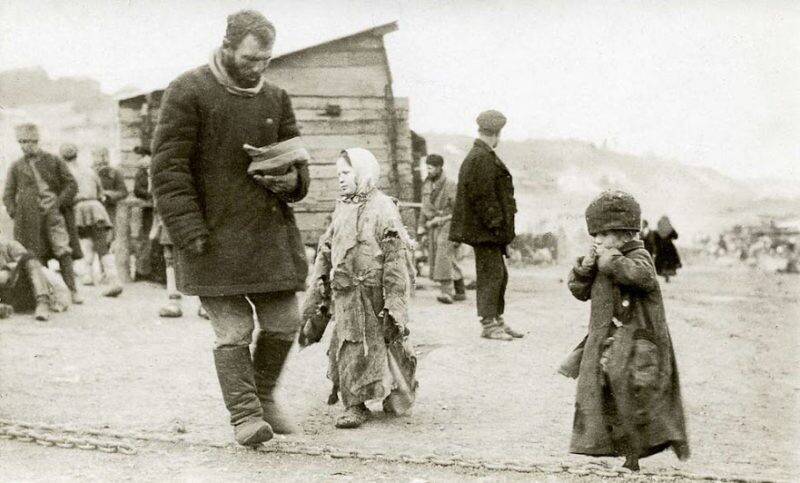 The beggar and his children

“Blessed are the poor in spirit, for theirs is the kingdom of heaven ...
... Give to the one who asks of you, and do not turn away from the one who wants to borrow from you "
(Matthew 5: 3, 5:42)
Charity in pre-revolutionary Russia. In accordance with the Christian faith, beggars in Russia were required to give, and giving alms was considered a very important form of charity. Christian mercy - this is the postulate that really changed the harsh life of pre-juicy pagans. After all, now everyone who suffered and needed help automatically became a "son of God." How can one refuse alms? Sinful!

Before the adoption of Christianity, the Slavs could not even have imagined that their weak relatives, and even more crippled ones, needed to be fed for nothing. Loss of property or injury left the victim only two ways: death from hunger or life with his fellow countryman as a slave, with the performance of a feasible job for him.

The very weak nursed the children of the master and his chelyadins, entertained the strong and healthy with songs and legends, could guard the master's property. Now, being a beggar has become a godly affair. There were even special royal pilgrims-rogue, whom the king himself washed their feet, who were fed in the royal court and given clothes specially sewn for them by the princesses. Their rank was confirmed by a corresponding letter, which the order of the Grand Palace did not issue to everyone.

However, not all beggars in Russia were so lucky under the same Tsar Alexei Mikhailovich ...

The streets of cities and villages of pre-Petrine Russia were filled with hordes of not only real cripples, but also cunning simulators who shouted at different voices:

"Give, for Christ's sake ..."
and among the trading rows in the bazaars, and on the porches of some temples, and near the rich merchants' choir, where hundreds of them gathered.

Christians - from the word to be Christians, that is, to ask in the name of Christ - this is how such people were called. And all the others, who were more from God, tried not to refuse them handouts and asked the sinners to pray for them.
To the Tsar and the Patriarch, however, they reported:

“During the services, there are ten or more people running around the church with swaddling clothes on their dishes, they collect them for the church, they are insane.

In the church there is turmoil, swearing, screeching and squeaking and stinking barking, fighting to the point of blood, for many bring with them sticks with tips. "
The following information was also brought to light:

“Beggars roam the streets, pretending thieves, begging under the windows of alms, noticing who lives how, so that when that time, it is better to steal.

Little guys are being stolen.

They break their arms and legs and lay them on the streets, sharing the affection of people. "
Patriarch Nikon tried to curb such lewdness, but he succeeded a little.

Then Tsar Peter I took up this problem decisively, issuing a decree according to which it was forbidden to give alms on the streets. Anyone who shoved a copper penny to a man with an outstretched hand was now in for a hefty fine. Well, they beat the beggar with whips and sent him out of the city. A beggar caught a second time was sent to Siberia.

At the same time, the tsar ordered to open many almshouses in the cities, shelters at monasteries and special hospice houses, where the poor were supposed to be fed and watered and gave them shelter.

But in the end, the decree simply ceased to be implemented, because the country did not have any means to fully implement it. Nicholas I in 1834 also issued a decree on the creation of a Committee for the analysis and charity of the poor in the city of St. Petersburg. In accordance with it, the police caught vagrants and beggars, and "assorted" on real invalids and hardened pretenders. The former were at least somehow treated and given a little money, and the latter were sent back to Siberia to dig ore and cut wood.

As a result, there are no fewer beggars on the city streets. But the largest number of beggars in the country was given by the abolition of serfdom in 1861.

In fact, a real disaster has begun in the country.

"Imperial scale".
Because almost a third of the peasants of Russia, who had previously been in the position of real slaves, suddenly found themselves free, and penniless, without property and without care, who fed the master in difficult circumstances.

As a result, many tens of thousands of liberated peasants rushed from the countryside to the cities in search of a better life. And someone in the end there just became very bad, and they died. And someone adapted to a new life and turned begging into a profitable business, which did not require initial capital, but made it possible to live a little worse, and often better than those who earned a living by honest labor.

At the end of the XNUMXth century, any believing Russian, in order to enter the temple of God, had to overcome a real "obstacle course". It was impossible to approach the cathedral, such a dense ring of beggars surrounded it. In addition, they grabbed people by their clothes, threw themselves at their feet, wept, screamed, laughed, demonstrated disgusting sores and deformities, just to get alms.

The mendicant brethren in the churches performed real performances, which Anatoly Bakhtiarov, a Petersburg journalist of the beginning of the XNUMXth century, very vividly described in his book "Inveterate People: Essays from the Life of Perished People":

“… At this time in the narthex of the temple a merchant appeared rather elderly. Seeing him, the beggars instantly quieted down and, groaning and sighing, began to chant, begging for alms. - Give it, for Christ's sake! Do not refuse, benefactor! The husband is dead! Seven children! - Give the blind man, the blind man! - Help the wretched, unfortunate! The merchant thrust a copper into the hand of the "unfortunate widow" and went on ... "
Bakhtiarov describes as one of the beggars, depicting a blind man, says:

"I looked through all my eyes, so as not to miss Vladyka!"
History with Panikovsky, who in the city of Kiev portrayed a blind man - not fiction. So it was, and in this way they were begging for quite healthy and strong men who simply did not want to bother themselves with any work. And why bother, if you are already served? 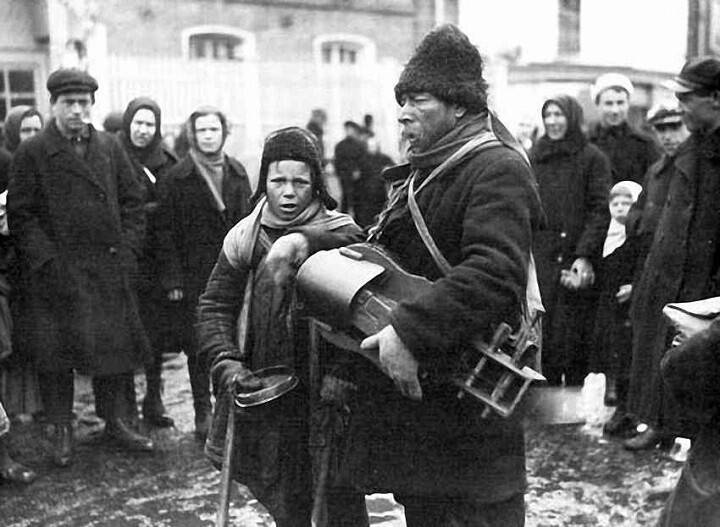 Street musicians. These at least somehow "worked". Most often this “instrument” had one melody - a pitiful one. They usually sang to her tune: “Marusya got poisoned, they took me to the hospital. Her soul was broken on the path of life ... "
Historians argue to this day about how many beggars there were in pre-revolutionary Russia.

True, it is known for sure that, for example, at the beginning of the 1905th century, namely from 1910 to 14, in Moscow and St. Petersburg alone, the police annually detained 19-XNUMX thousand beggars.

There were entire villages whose inhabitants went to the city to engage in begging. And they were all strong, healthy men, and even with sticks in their hands! They portrayed the blind with the boy as a guide, scaredly wrapped their eyelids, pounded with sticks at the shutters of the three-window outbuildings ... And then, having collected hundreds of rubles (!), They returned to the village and drank there with their wives and children, just to the point of gloom. 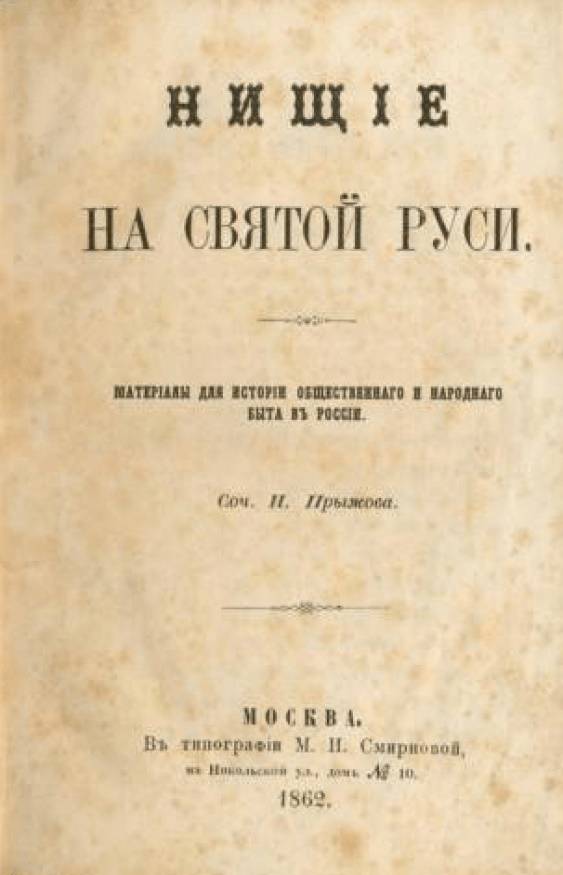 A very interesting book about begging in Russia, but, unfortunately, there is nothing in it about the begging of the era of the end of the empire. Published in 1862
And merchants, and even more so our intelligentsia, willingly served the rogues, sincerely believing in their uncomplicated and therefore especially compassionate stories.

And how many sleepless nights thinking about

"The fate of the unfortunate Russian people"
conducted by our writers, poets and philosophers, inspired by the stories of both real and often imaginary cripples and homeless fire victims. But all these lovers of the suffering did not even suspect that among the mendicant brethren there was their own specialization and their very harsh laws.

So the most prestigious among the "professions" of beggars were the so-called "praying mantises" - a kind of elite among the beggars. Getting into the "praying mantises" was not easy. Strangers could simply be mutilated, since the "sick" and "crippled" from the porch did not know pity for their competitors. But they also had their own certain "democracy". That is, if you stood in the morning at the money place near the church, then by vespers, be so kind as to give up your place to someone else.

Not so money, but not even very dusty, was the work of the "gravediggers", that is, those who asked for alms in cemeteries. As soon as the "crucian" appeared there (in the jargon of the cemetery beggars, the deceased was called so), a crowd of beggars immediately rushed towards the inconsolable relatives of the deceased, and, expressing mutual grief and at the same time showing their real and "fake" ulcers and injuries, asked for money to commemorate his soul.

And they were served because they wanted good to the deceased, they wanted him to enter the Kingdom of Heaven. But the most interesting thing is that many of those who asked were richer than those who served them.

There were "fire victims" with permanent traces of fire on their faces and clothes. And many believed them. Because, everyone knew that fires happen in Russia all the time. There were "wanderers" wandering from the Holy Places, and aroused religious reverence among the inhabitants. Moreover, the giver usually received a blessing from the "wanderer" and was unspeakably happy with him. 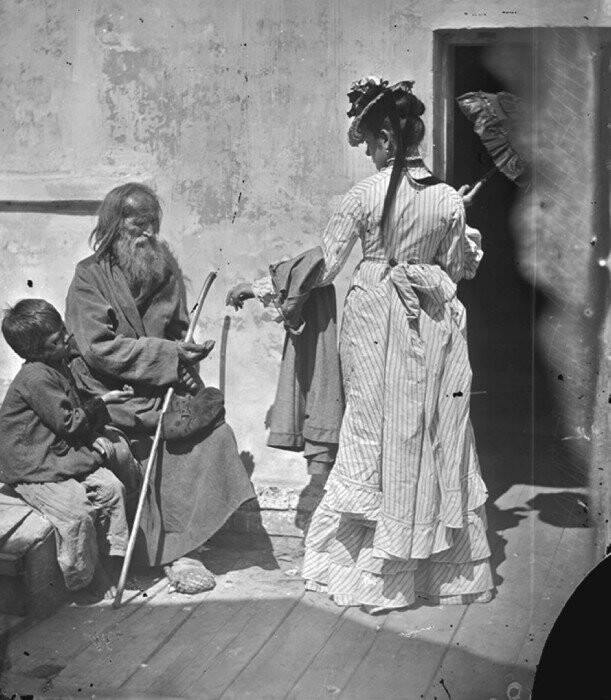 "Well, how can such a bearded old man not serve?"
The “settlers” portrayed the victims of the Stolypin agrarian reform. These wandered around the country in whole crowds and served them simply in order to get rid of them.

But a special caste, the "white bone" among the beggars, were the beggars-writers, who often had even a good education, neatly dressed and looked quite dignified. They did not beg on the streets, but went to the shops, asked the clerk to call the owner and told him a heartbreaking story.

A real gift of fate was a lonely fine-looking lady who found herself in the shop (they were specially looking out for such, and waited until she went inside), who just melted from the stories of such subjects and sometimes gave them very generously.