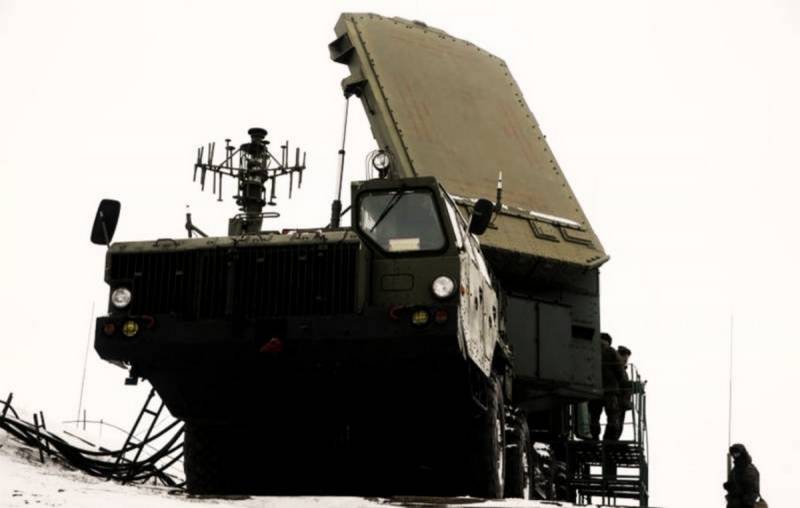 While the operational-tactical situation in the Donbass theater of military operations has once again acquired a steady tendency towards aggravation, due to the final failure of the unviable "Minsk format" and providing Moscow with a well-founded carte blanche to provide the 1st and 2nd army corps of the NM with the military -technical and informational support in the upcoming confrontation with the units of the regular Ukrainian army, a certain amount of concern is caused by unexpected information about the resumption of the final phase of the development of the promising operational-tactical missile system Sapsan by the State Enterprise Yuzhnoye Design Bureau, also known under the export name "Thunder -2 "at the design stage of the" Arabian modification "of the OTRK, as well as as part of the demonstration at several international arms exhibitions since 2013.

Indeed, in the light of the unquestioning implementation by the National Security and Defense Council of the "Independent" of the relevant recommendations of the Biden administration, the State Department and the US Defense Department on the accelerated bringing of the Donbass and Azov-Black Sea regions into a pre-escalation state, as well as against the background of the active participation of specialists from American military-industrial corporations "Raytheon" and "Lockheed Martin" in the design of modern inertial navigation units and gas-dynamic control units for the promising 300-mm guided rockets "Alder-M", it is possible that the new OTRK will gain operational readiness as soon as possible, and then attempts to use it, both against the units of the army corps of the NM LDNR, and against strategically important facilities of the Russian Armed Forces on the territory of the Western and Southern military districts.

In view of the current circumstances, a detailed analysis of the geography of application, as well as the assumed electrodynamic and flight technical parameters (including the features of flight modes on the cruise and terminal sections of the trajectories) of the Sapsan operational-tactical ballistic missiles for the subsequent development of the most effective measures to counter the new threat through anti-aircraft missile systems of the military air defense and the Aerospace Forces of Russia.

Taking into account the proposal recently voiced by the Minister of Infrastructure of Ukraine Vladislav Krikliy on the provision of airspace to the "square" for the transfer of forces and means of the NATO allied forces by means of a military transport aviation, as well as monitoring the operational-tactical situation along the Russian-Ukrainian border, it is extremely difficult not to come to the conclusion that in the event of an escalation scenario in the Ukrainian airspace over the Kherson, Kharkov and Sumy regions, not only Global Hawks may appear, but also the RC-135V / W "Rivet Joint" strategic radio and electronic reconnaissance aircraft.

The RTR 55000 AEELS systems integrated into the avionics of these machines are capable of detecting any types of radar detectors and radars for illumination and guidance of domestic air defense systems (with the determination of coordinates and analysis of their frequency parameters and operating modes) up to the radio horizon line, ranging from several tens to 435 km (depending on from the high-altitude echelon of operation "Rivet Joint").

As a result, the brigades of RC-135V / W Block 8 operators will be able to provide the combat crews of the Ukrainian Sapsans with the coordinates of our S-300PM1 / 2 and S300V4 anti-aircraft missile regiments (while entering their ranges), which cover strategically important infrastructure in Rostov, Voronezh, Belgorod and Kursk regions.

Being a conceptual (and partially constructive) analogue of the 9M723-1 Iskander-M operational-tactical ballistic missiles, the Sapsan OTBR not only has a similar configuration for the placement of aerodynamic rudders, but also boasts the presence of tail units for gas-dynamic correction in the pitch and yaw planes (four 7-nozzle gas-dynamic modules with 7 individual gas generators for each OTBR).

As a consequence, we are dealing with a high-speed OTBR (about 5-6M), which has a ballistic or quasi-ballistic flight trajectory with an apogee of 25-30 to 70 km and the ability to attack enemy anti-aircraft missiles in a dive mode at an angle of 90 degrees, carrying out intensive anti-aircraft maneuvers with overloads 20-25G. 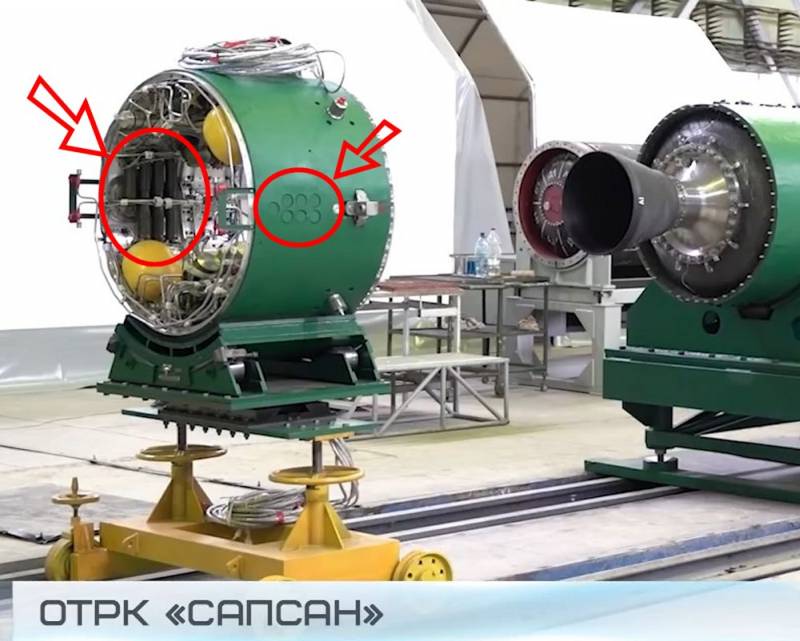 Gas generator and nozzle modules of the impulse gas dynamic correction system installed on the prototype OTRK "Sapsan"
Based on this information, one can come to the conclusion that the OTBR data will pose an extremely serious threat to the 108th and 1536th anti-aircraft missile regiments S-300PM1 and S-400 "Triumph" stationed in the Voronezh and Rostov regions, equipped with anti-aircraft guided missiles 48N6E and 48N6DM with semi-active radar homing heads, which do not intercept air attack weapons diving at the attacked division at angles of more than 64 degrees (into the "dead funnel" - outside the elevation sector of view of the PFAR divisional radar for illumination and guidance 30 / 92N6E ).

Moreover, even in the case of intercepting the approaching Sapsan OTBR, even on the marching sections of quasi-ballistic trajectories (until the moment the three hundred / four hundred thousand illuminated radars are out of the elevation sector), a problem may arise due to the insufficient overloads of long-range missiles 48N6E / DM.

As you know, the limited constructive margin of safety and the possibility of using only the aerodynamic control system after the solid propellant rocket charge burns out (during the solid propellant rocket engine's operation, the gas-jet thrust vector deflection system also functions) provides these missiles with available overloads of the order of 30-35 units, which is absolutely insufficient to intercept objects carrying out anti-aircraft maneuvers with overloads of more than 17G (this list may also include the Sapsan OTBR).

This situation can be radically changed, first of all, by re-equipping the 108th and 1536th air defense missile systems with the latest S-350A Vityaz medium / long-range anti-aircraft missile systems.

The 9M96E / DM interceptor missiles included in the ammunition of these air defense missile systems are capable of easily intercepting the most sophisticated aerospace attack weapons that attack the division into a "dead funnel", hiding from the directional pattern of the guidance radar by means of a sheer dive.

This ability is ensured by equipping the 9M96E / DM with active radar seeker of the Slanets family, capable of receiving target designation from third-party radar and / or optical-electronic reconnaissance sources and not requiring continuous illumination using the 50N6A guidance radar.

Moreover, these anti-aircraft missiles are the only super-maneuverable anti-missile missiles in the Russian Aerospace Forces capable of intercepting overloads of the order of 65-70G (providing interception of both the Sapsan OTBR and more maneuverable objects), thanks to the presence of gas-dynamic "blocks" of transverse control.

Ctrl Enter
Noticed oshЫbku Highlight text and press. Ctrl + Enter
We are
In Ukraine, announced plans to create a multi-purpose missile system“JDAM” for the “Super Hornets” of the Kuwaiti Air Force - preparing the “Arabian Coalition” for future conflicts with Iran
Military Reviewin Yandex News
Military Reviewin Google News
176 comments
Information
Dear reader, to leave comments on the publication, you must sign in.