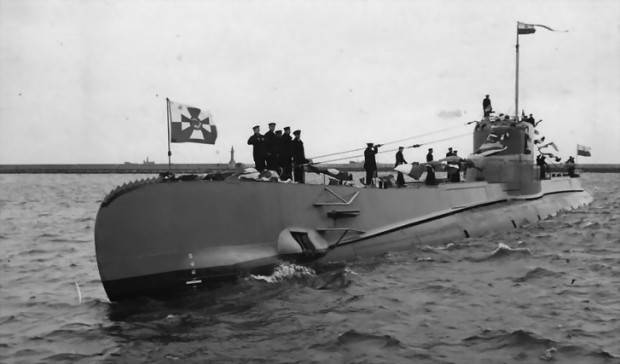 "Ozhel" became a legend of the Polish naval fleet... Her daring escape from internment was made famous by the Polish war reporter Erik Sopočko.

"Ozhel" (ORP Orzeł, "Oryol") was the only fully operational submarine of the Polish navy in 1939. Her twin "Semp" ("Sip"), after a kind of "escape" from the Dutch shipyard, constantly suffered from defects and breakdowns of ship mechanisms. It was impossible to eliminate these defects in Poland due to the lack of appropriate shipyards and specialists. Therefore, the boat did not pass numerous tests and was recognized as fit for service to a limited extent.

The crews of both ships lacked the necessary training, especially the psychological resistance to long voyages and the effects of depth charges. In addition, there were no emergency evacuation exercises for submariners. In addition, the Hel naval base did not have a pier or dock where submarines could go through some, even the simplest repair, resupply and rest the crews.

The big mistake of the fleet command was the approval of the plan "Vorek" (The Sack, Plan Worek), which provided for the concentration of submarine forces near the Polish coast.

Thus, Polish submarine operations were limited to patrolling narrow and small sectors where they were easy to track down. Already the first hours of the war showed how disastrous such a tactic was.

Sectors of Polish submarines coincided with the lines of the German blockade. From the very beginning of the war, German aircraft and ships incessantly tracked down and attacked Polish ships and set minefields along their routes. At the same time, Polish submarines were not presented with any opportunity to attack enemy forces.

originally "I'll chew" it fell to patrol the central zone of the Danzig Bay, where the navigation conditions did not at all correspond to its tactical and technical characteristics.

Before the Second World War, the command of the Polish navy insisted on orders for large, ocean-going ships, useless in the shallow waters of the Baltic Sea. But this policy had its own hidden meaning: the more complex and expensive the ordered equipment was, the more kickbacks settled in the pockets of corrupt officials.

The Dutch shipyards, to which orders were placed, built ships of the highest quality for the needs of the escort service on the communications linking Holland with the colonies, especially in the Indian Ocean. In the Baltic Sea, Dutch-built submarines had problems with ballast, in connection with which they could either only walk in a flood position, or go to the bottom. However, after "Ozhela" и "Sempa" the Polish government and command planned to order two more submarines with even larger dimensions.

In the end, on September 4, 1939, the fleet command decided to transfer "Ozhela" in reserve, with an eye to using it in another area, if a favorable situation develops for this.

The command did not yet know that by that time the commander of the submarine, captain of the third rank (in Polish - commander second lieutenant) Henryk Klochkovsky, had voluntarily left the sector allocated to him, without notifying his superiors about it.

The ship headed for Gotland, hoping to give the crew a break and do minor repairs. On the way to "Ozhel" met an enemy convoy with a weak escort, but, despite an advantageous position, Klochkovsky evaded the attack.

Instead, he radioed that a strong enemy escort was attacking his ship with depth charges. In fact, on September 5, German ships attacked another submarine - "Wilk" (Wolf). Most likely on "Ozhele" heard the echo of ruptures. And Klochkovsky used this circumstance to hide his actions.

"Ozhel" reached Gotland on the morning of September 6 and spent two days there away from war, enemy and sea communications.

And on September 8 he radioed that Klochkovsky was ill, possibly with typhus. However, in light of subsequent events, it can be concluded that he was simply feigning illness in order to leave his ship.

However, he handed over the command to his Deputy Lieutenant Commander Jan Grudziński only on September 10. Grudzinsky radioed to Hel about Klochkovsky's "illness" and the need to repair the compressor due to a bursting cylinder.

The fleet commander radioed in response:

“Disembark the captain of the ship in a neutral port and continue under the command of his first deputy, or carefully enter Hel at night to replace the captain.

Please report your decision. "
But Grudziński never received this news, although the Heli radio station broadcasted the dispatch many times over the course of two days.

Meanwhile the officers "Ozhela" tried to convince their commander to approach Gotland, where he could leave the ship in a boat. Klochkovsky rejected all reasonable arguments and decided to go to Tallinn, where he had acquaintances since his time in the Russian Navy.

This was another insubordination on his part, since the command of the fleet had clearly instructed the Polish submarine commanders to enter (in case of emergency) only in Swedish ports.

"Ozhel" went to the roadstead of Tallinn on the night of September 14 and requested permission to disembark a sick crew member and carry out repair work. The Estonian pilot refused to take the patient on board and requested instructions from his superiors.

We had to wait until morning for permission to enter the port. The broken compressor was immediately removed and sent to the port workshop. At the same time, Klochkovsky got off the ship, not forgetting to take with him all his personal belongings, a hunting rifle and a typewriter.

It was quite clear that he had no intention of returning aboard regardless of the diagnosis. Lieutenant Commander Grudziński remained behind him.

Meanwhile, an Estonian gunboat moored next to a Polish submarine "Laine".

Initially, this did not arouse any suspicion among the Poles, especially since the Estonians soon "explained" their actions. Estonian officers who arrived at "Ozhel", told the Poles that their stay in Tallinn would be extended by 24 hours, as the German merchant ship "Thalassa" announced its intention to leave the port the next day.

Thus, the Polish submarine could not leave the port earlier than 24 hours after leaving "Thalassa"... The motivation of the Estonians was fully in line with international rules.

But when the extended stay "Ozhela" expired in Tallinn, the Estonians appeared again and informed Grudzinsky that the Estonian authorities had decided to intern the Polish ship.

This was already a gross violation of international rules.

It is believed that the Estonians did so under German pressure.

But it is now known that the day before Klochkovsky had a long, secret conversation with his Estonian friends. One way or another, the Estonians got down to business very zealously. And already on September 16, Estonian soldiers arrived on the ship and began to unscrew the breeches from its guns, and also confiscated all its maps, logbooks and navigation equipment.

The Polish crew did not intend to succumb to internment and came up with a daring plan to escape from Tallinn. It was realized on the night of September 17-18. Two weeks "Ozhel" wandered around the Baltic Sea with only one homemade map, which Grudziński drew from memory, and with one compass, which one of the sailors hid among his belongings. With an exhausted crew, no ammunition, the ship tried in vain to find a target for the remaining torpedoes.

Meanwhile, Kolochkovsky remained in Estonia. He spent only 3 days in the hospital. From which it follows that no illness was found in him. Then he moved to Tartu, the second largest city in Estonia, where he discharged his family.

It is clear that such a long voyage of a lone submarine with deteriorated navigation and combat qualities, across a sea strewn with minefields, with a constant pursuit of enemy naval and air forces, is a real feat.

On October XNUMX, in view of the surrender of the last pockets of resistance in Poland and the consumption of provisions and fuel, the commander "Ozhela" decided to make his way to Great Britain through the Danish Straits, where he entered the night of 8-9 October.

In the area of ​​the island of Ven "Ozhel" sank under water because of the danger of being tracked down by German or Swedish ships.

The submarine spent the whole day on October 9 at the bottom and continued on its way the next day. She made her way carefully into the Kattegat through the narrow strait separating Elsignor from Helsingborg, full of minefields and German ships.

There the Poles spent two more days trying to hunt German ships between Cape Kullen and Anholt Island, then near Cape Skagen.

Eventually, on 12 October, Grudzinsky sent his ship to the North Sea and on 14 October made contact with the British fleet.

By the end of the day "Ozhel" moored at the naval base in Rosyte. This is the second entry (after "Wilka") the Polish submarine greatly embarrassed the British Admiralty, as the Poles passed unnoticed through sectors patrolled by British aircraft, submarines and light surface forces.

Renovated in Scotland "Ozhel" returned to service on December 1, 1939.

In early 1940, the Poles began to patrol their assigned sectors in the North Sea. There were seven patrols.

From the seventh patrol "Ozhel" did not return. And his fate has not yet been established.

However, the most likely cause of death "Ozhela" mistaken torpedoing of a Polish submarine by a Dutch "O-13", which on that fateful day had to change "Ozhela" in the designated sector.

Dutch sailors could identify the silhouette "Ozhela" as a homogeneous Dutch submarine. The Dutch already knew that they all fell into the hands of the Germans during the occupation of Holland, but most likely they did not know that two of them were sold to Poland before the war.

Interestingly, two weeks later "O-13" missing. And on the same day the submarine "Wilk" reported on the sinking of a German submarine.

Only after the war did the captured German documents show that the German submarine fleet suffered no losses that day.

If both of these facts are somehow connected, then it is possible that "Wilk" "Avenged" "Ozhela".

Obviously, during the war, such facts were not made public. And after the war история "Ozhela" mired in legends, innuendo and lies.

Author:
Mikhail Arushev
Photos used:
From the archives of the Author. Courtesy of the Institute. General Sikorsky in London.