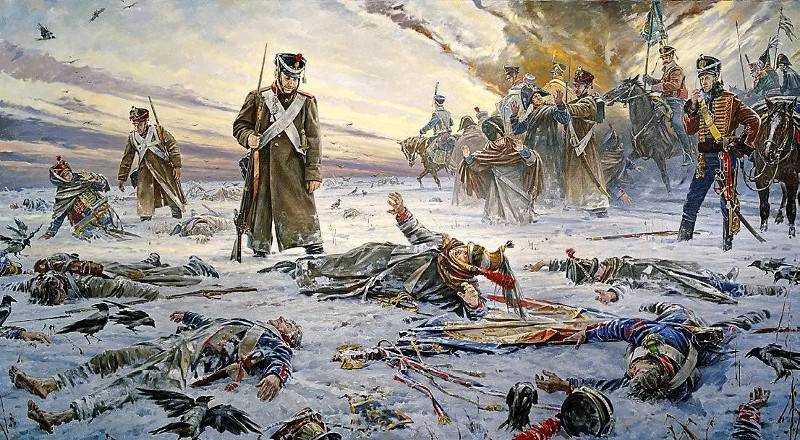 The death of the invasion. Painting by Vasily Nesterenko. In the Napoleonic era, the fate of the wounded abandoned on the battlefield was unenviable.

This is the second article on the French medical service during the Napoleonic wars. In the first material Medical Service of Napoleon's Grand Army we talked about stories its formation.

Napoleon's order to abandon the wounded

In the memoirs of direct participants in the events of the Napoleonic era, images of the battlefields and how they looked at the end of the battles are necessarily present. Especially such large ones as Preussisch-Eylau, Friedland, Aspern, Wagram, Borodino, Leipzig or Waterloo.

Since the masses of troops were drawn into a limited space, intense artillery fire, heavy firing of infantry squares and cavalry attacks reaped a truly bloody harvest. Suffice it to recall the Borodino field, on each square kilometer of which there were 3000 dead Russian soldiers and soldiers of the Napoleonic army.

But much more than the killed, there were wounded and shell-shocked. Artillery balls, rolling on the ground and bouncing by inertia, broke their legs, without causing instant death. Bullets and saber strikes knocked the infantry out of the ranks. But also not all of them are fatal. To this must be added a large number of wounds (in particular, craniocerebral) from branches knocked down by cannonballs, or from collapsed buildings.

The wounded during the battle envied the fate of the dead. In the first revolutionary wars, it still happened that soldiers carried wounded comrades from the battlefield, guided not so much by a feeling of pity as by the desire to save their own lives.

If the wounded man was conscious, he was put on a gun carried by a couple of soldiers. And those who were unconscious were already carried out by four on their greatcoats. With a large number of wounded, their evacuation to the rear significantly weakened the active regiments.

Therefore, already during the Italian campaign, Napoleon Bonaparte forbade the removal of the wounded from the battlefield. Subsequently, he repeated his order several times.

For example, on the eve of the battle at Wagram in the daily order for the army, the emperor, among other things, unambiguously emphasized:

“The wounded who cannot walk themselves remain on the battlefield.

It is forbidden to leave the battle formations to transport the wounded. "
Therefore, the wounded were left to their own devices where they were overtaken by a bullet, bayonet or saber.

In the best case, the comrades dragged the poor fellows several meters, under trees or wagons, in order to at least to some extent protect them from horse hooves and cannon wheels. Many died before the battles ended. Others were already in agony when the battle was over. And they, in general, were not engaged in such.

The rule was to collect after the battle only those wounded, whose condition gave hope for successful treatment. The wounded in the abdominal cavity could not count on any assistance, unless they were senior officers.

Ordinary soldiers were ready to deal with their wounded comrades after the battle. But often battalions and squadrons changed their position in battle formations, and after several attacks and counterattacks it was no longer clear where their fellow soldiers had fallen a few hours earlier and whether they were still alive.

As soon as the battle ended, looters and peasants from neighboring villages, eager for prey, appeared on the battlefield. They ripped off the killed, dying, and often seriously wounded. They were looking primarily for money, rings, weapon and everything that could be useful in a hike or household.

The loot could either be sold in the nearest town, or kept with you as trophies. Boots, raincoats and uniforms were also stripped from the wounded, which was due to the constant shortage of clothing and shoes. If the wounded protested (which obviously happened), then the robbers, even from the same army, mercilessly killed them in order to acquire what, as they cynically said,

"No longer useful to blind man's buffs."
After such a campaign of robbers, many wounded, deprived of shoes and clothes, died in the cold or in the rain.

After the robbers, soldiers or peasants, sent to bury the dead, came to the battlefield. This did not always happen immediately after the battle, but, rather, under the pressure of circumstances, when the army fought in hot weather, for example, in Italy or Spain. It was about the desire to prevent epidemics, the fear of which was enormous. Soldiers and peasants went to the funeral teams willingly, hoping that, despite the previous passage of the marauders, with the dead they could still find something to profit from.

The soldier was buried along with the horses, making no difference between friends and foes. There were no ceremonies with the participation of chaplains. The corpses were simply dumped into huge mass graves, sprinkling with only a thin layer of earth, often without crosses or other markings of burial places. Smelling fresh blood, stray dogs and wild animals gathered to the graves and dug up corpses. If the army was setting up bivouacs on the battlefield, sentries fired at the animals to scare them away.

Everyone was buried in this way - from ordinary soldiers to senior officers of the Great Army.
Individual burials were rare. The place where General François-Joseph Kirgener died and was buried in Merkersdorf is still marked with a stone with his name.

In the cathedral in Oliva, a memorial plate has been preserved over the burial place of Colonel Nicolas Imrecourt, who died during the siege of Danzig.

The remains of some senior officers were transported to France only through the efforts of their wealthy families or by direct order of Napoleon.

For example, the body of Marshal Jean Lanne, who died after amputating his leg at the Battle of Essling, returned to Paris. Or General Antoine Charles Louis de Lassalle, who died at Wagram.

But in a huge number of cases it was not possible to deal with a proper burial, because in every battle many officers, and even generals, were killed.