"The Empire Strikes Back": a tank battle at Villers-Bretonne ... 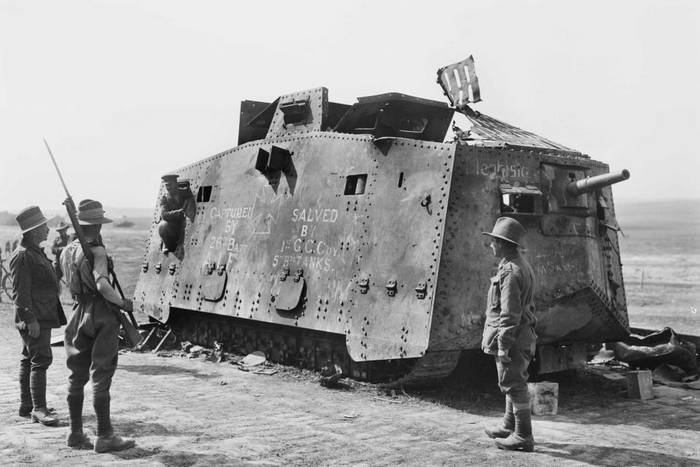 Tank A7V "Mephisto" after evacuation from the battlefield, 1918. Around tank Australian soldiers are standing and rejoicing! Imperial War Archives

“Tanks rushed, raising the wind,
Formidable armor was advancing ... "
"Three Tankmen" B. S. Laskin
Tanks of the world. And it so happened that after a successful offensive at Cambrai, the Germans decided to retaliate against the Allies and on March 21, 1918, they began Operation Michael. Powerful artillery fire swept away the ranks of the British barbed wire, after which ... German tanks moved into the attack for the first time: four brand-new German A7Vs and five captured British Mk IVs with huge Teutonic crosses on their armor. The tanks covered 8 km and broke through the British front, and it turned out that the British infantry was not able to fight tanks! 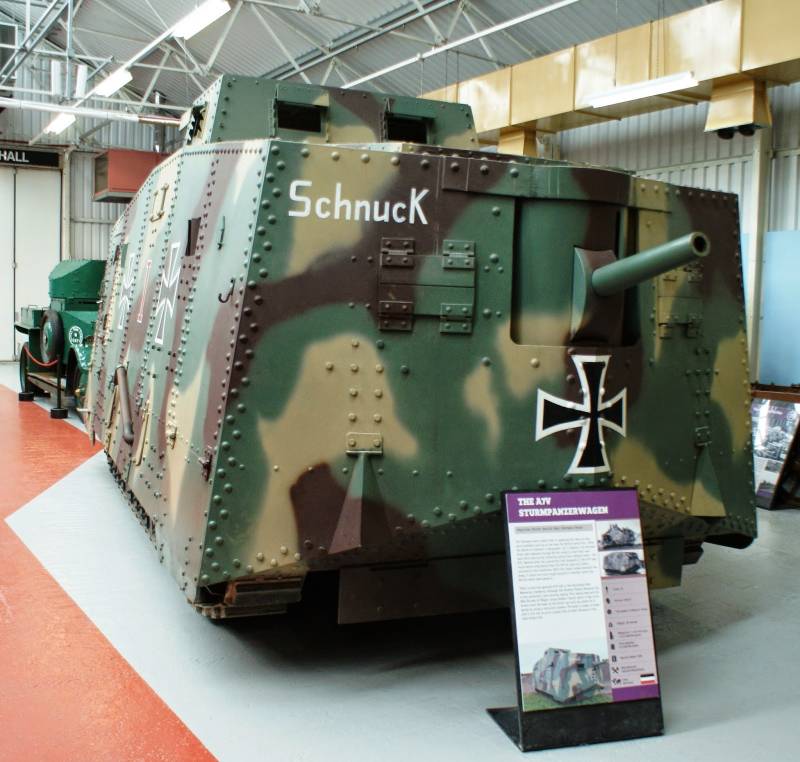 Tank A7V "Shnyuk" is in the Tank Museum in Bovington. But this is a remake. On the other hand, he's on the move!
After 15 days, the German troops expanded the penetration to 50 km along the front and 30-35 km into the depth of the enemy's defense. British tanks in groups counterattacked the enemy and were able to detain him. However, the Germans failed to achieve a decisive victory not at all because they were stopped by tanks. The reason was ... a banal overwork of personnel and a lack of resources, which were spent faster than planned. As a result, the British brought up their reserves and stopped the advance of the German troops.

Nevertheless, even with minimal forces, they continued to attempt an offensive. One of them was planned at the town of Villers-Bretonne, in order to move forward 8 km to the road to Amiens and put it under control, which would significantly complicate the position of the Allies. The Chief of the General Staff, General Erich Ludendorff, supported the idea of ​​the strike when he was informed of the impending offensive. At the same time, he allowed the use of tanks - all 15 A7Vs, which were located in this sector of the front. 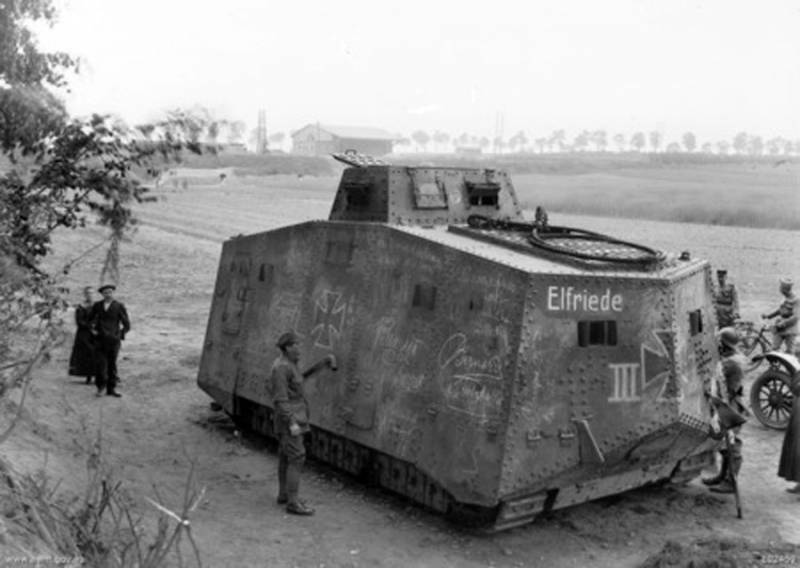 Tank "Elfiride". Bundesarchive
German intelligence noticed that in the forest behind Villers-Bretonne and Kasha there were British tanks, as well as batteries of 83,8-mm guns. All this did not give reasons for optimism, therefore, on the eve of the offensive, the entire area was fired upon with chemical shells with mustard gas (mustard gas), which made it truly the most disgusting place to be in the world.

The British felt that the attack was about to begin, they knew that the Germans had tanks, but they actually could not oppose something to the enemy. They also had tanks, but what kind of tanks were they? 7 tanks "Whippet", 3 "female" Mk IV with machine-gun armament and only one cannon Mk of 2nd Lieutenant Frank Mitchell. But this tank was not a full-fledged combat unit, because three of its crew members were gassed and out of order.

A7V tank project with a 77 mm cannon. Such a tank would become a truly deadly weapon for the tanks and infantry of the British, but ... the German command considered that a 37-mm cannon would be enough for him. How wrong they were!
And it was here, under the cover of thick smoke and clouds of gas, at 7 o'clock in the morning, the Germans began their attack. The tanks were moving in three groups. The first is in the direction of Villers-Bretonne and Cachy, the second is Cachy, and the third is Bois de Angar. For the first two, everything went according to plan. Acting together with the infantry and even overtaking it in some places, the tanks captured the indicated settlements, took many prisoners and then were recalled to the base as having completed their combat mission. 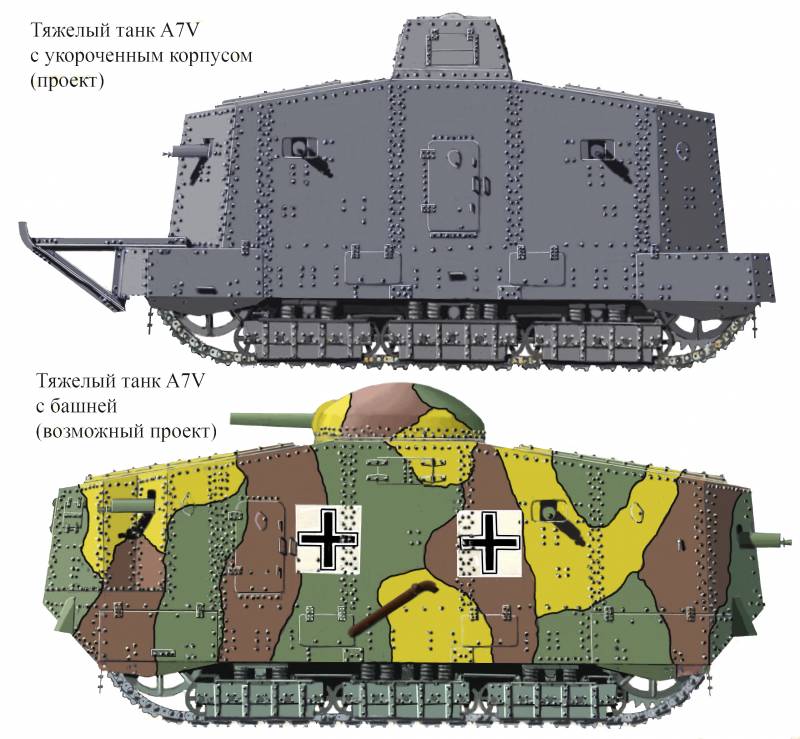 At first, they wanted to produce the tank only with machine-gun armament. Then they nevertheless put the cannon, but it was positioned so poorly that at the slightest turn of the tank, the shooter lost his target. And the angle of horizontal fire was only 30 degrees. For some reason, no one had the idea to put on a tank a turret from "pill boxes", which had already been fully worked out by production and armed with a 57-mm fortress gun. And it should have been placed in the center of the tank. But ... none of the German engineers and generals, fortunately for the British, never thought of this simple solution. 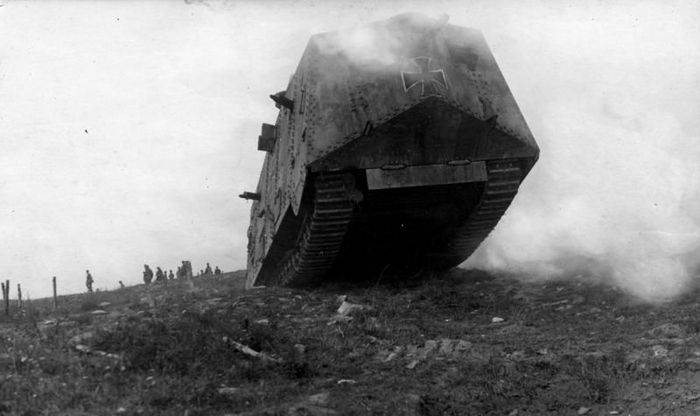 German tank on rough terrain. Photo from the Bundesarchiv
But the third group was unlucky. The resistance of the British at Bois-de-Angar turned out to be stubborn, besides, the Elfrida tank, although it suppressed the enemy machine guns, but ... fell into a ravine! 22 tankers took up defensive positions in it, but retreated after their lieutenant was killed. However, the British retreated here too, so this strange clash ended in a draw.

Already at 8:45, Captain F. Brown, the commander of the tank battalion "A", went on reconnaissance on Mitchell's tank, and then moved forward all his machine-gun tanks. The most interesting thing is that he simply ... did not see the German tanks, otherwise he would hardly have given such a rash order. 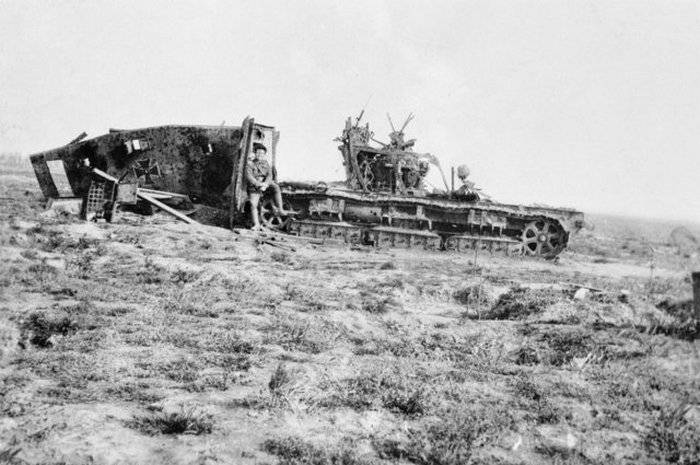 And this is what German tanks turned into on the battlefield. Photo from the Bundesarchiv
The tanks rolled forward, but when Brown and Mitchell's tank crawled through the English trench, a soldier shouted to them through the viewing slot: "Jerry tanks ahead!" (nickname of the Germans among the British). Then they saw them themselves - 3 A7V tanks on the way to the village of Kashi - vehicles from group No. 3. At the same time, the nearest German tank crawled out of the fog just 400 meters from the British tank. The tanks were followed by dense lines of German infantry ...

Captain Brown jumped out of the tank and ran towards the two "females" to warn them of the danger.

Meanwhile, Mitchell turned his tank around and opened fire on the German tank, which in turn noticed two "females", turned in their direction and also began to shoot at them. The British fired from a 57-mm gun, the Germans from a 37-mm one. 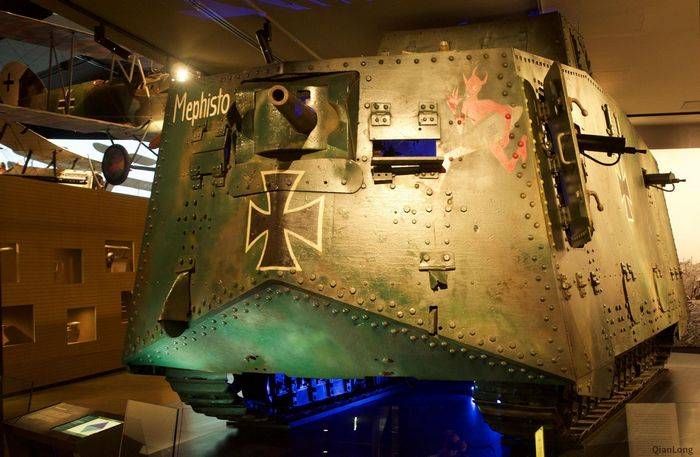 The Australian infantry trophy is the Mephisto tank. Since the "Mephisto" was captured by soldiers from Queensland, it was given to them as a trophy to raise the morale of the Australians, so that they could see with their own eyes the "special trophy" taken in battle by their compatriots in Europe. As a result, "Mephisto" stood in the open air in the Old Museum of Brisbane for decades before it was transferred to the Queensland Museum in the 1990s. Moreover, during a severe flood in Brisbane in 2011, the tank was covered with mud, and it urgently had to be restored in order to put it in the Australian war memorial. Now this tank can be seen in the Queensland Museum. If you are in Australia and want to see the world's last real A7V - you are here
The shooting was ineffective. First, the British were leading her on the move. Secondly, the gunners' assistants were constantly distracted by the maintenance of the tank's transmission. Therefore, the rate of fire was low.

But at 10:20 the English tank stopped, and the left sponson shooter managed to achieve three consecutive hits on the German vehicle. True, his shells were solid, armor-piercing, without an explosive charge. Nevertheless, the damage from them turned out to be very great. An artillery gunner was killed and two more tankers were mortally wounded. In addition, one of the shells damaged something in the tank's mechanics, so that it stopped moving. The crew left the tank and joined the infantry, and Mitchell, delighted with the success, continued to fire on the remaining two German vehicles. 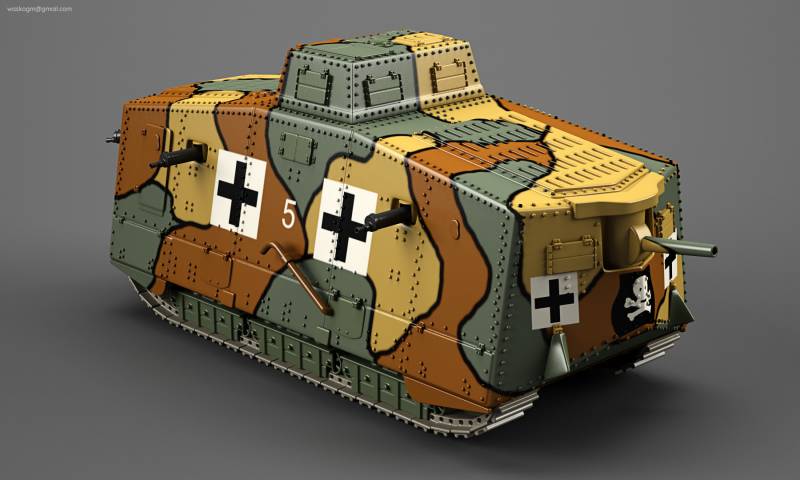 And here the A7V can be viewed in great detail. By Vasilije Ristovic 3D artist
Meanwhile, 7 "Whippets", unaware of the presence of tanks in the direction of their movement, were ordered to attack the German infantry and moved forward, pouring heavy machine-gun fire on it. And it was then that they found themselves right in front of Lieutenant Bitter's tank, whose gunner opened fire on them from a distance of 300 m. One "Whippet" was hit and caught fire, but the British still did not know who knocked it out. The tanks rebuilt in a zigzag and continued the extermination of the German infantry. But then the second tank flashed, and the third lost its speed. Three tanks retreated, and the fourth stopped 100 meters from Mitchell's car, but the German tank was still not visible! 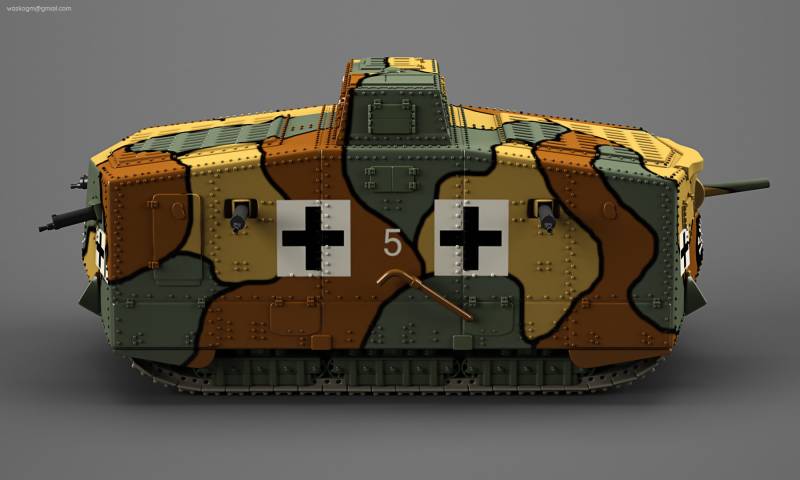 The same tank, the same master. Side view. By Vasilije Ristovic 3D artist
Meanwhile, the two remaining German tanks were ordered to withdraw. Mitchell saw that they were retreating, began to pursue them and shoot at them from 1000 m. But he never got there, but at 12:45 he lost the caterpillar and was forced to stop. At 14:30, both sides fizzled out, and the fight ended of itself. True, two German tanks tried to return Kashi, but the infantry did not follow them, and after shooting a little, they turned back. 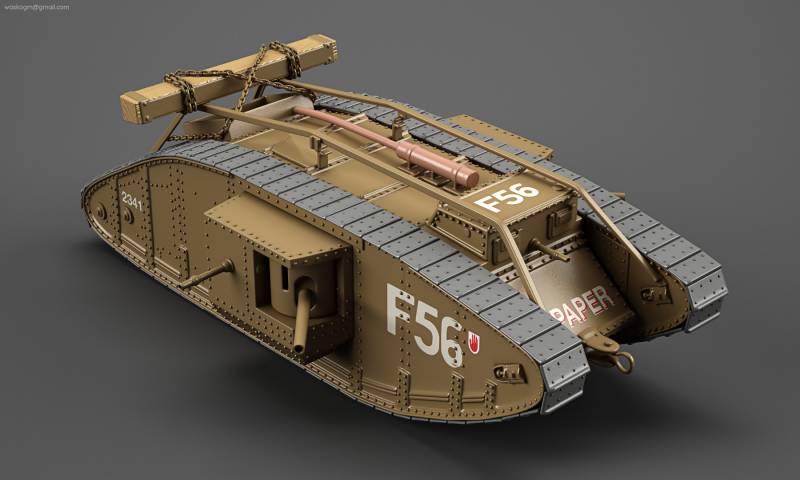 English Mk IV - enemy of German armor. By Vasilije Ristovic 3D artist
Naturally, both the Germans and their opponents drew certain conclusions from what happened. The Germans - that tanks are efficient and necessary. That shooting them, especially if the tank is standing, can be very effective. In addition, realizing that they could not quickly build up their tank fleet, they attended to the creation of an effective anti-tank rifle. The British immediately realized that since the Germans had tanks with cannon armament, machine-gun tanks would be powerless against them. The urgent rearmament of all machine-gun tanks into cannon tanks began. Since there were not enough artillery sponsors for all the vehicles produced, a palliative decision was made: to create "hermaphrodite tanks" with one cannon sponson, with it on the left on some tanks and on the right on others. 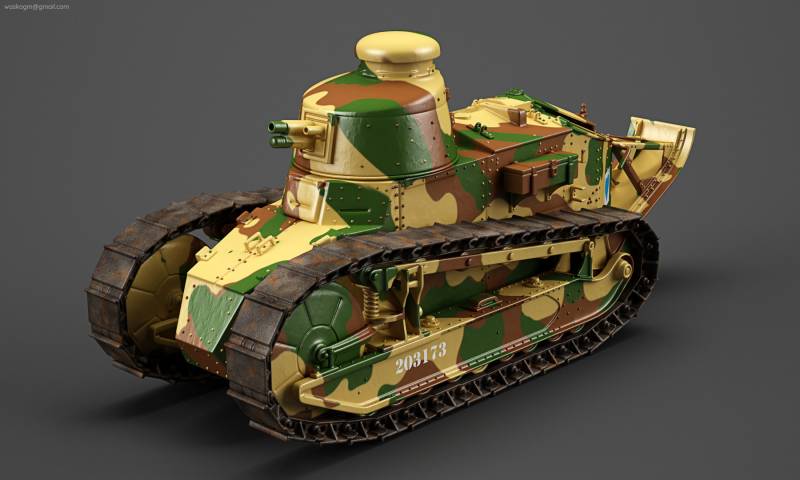 Handsome Renault FT-17. By Vasilije Ristovic 3D artist
In addition, the British continued to improve the Mk IV tank and finally created the Mk V, which not only received a more powerful engine (which is always good for a tank!), But also an improved control system. Now only one person could control the movement of the tank, which meant that the assistant shooters began to work more efficiently, which made the rate of fire of tank guns immediately increased!

A7V in typical German camouflage
Tanks became more and more a real combat vehicle, and this did not hesitate to affect the results of their use.

PS Color illustrations for the article were made by A.S. Sheps.