Spy exchange. The most famous cases in history

An exchange scene from the feature film Dead Season

The most textbook and well-known case of exchange is associated with the Glienicke Bridge, when the USSR changed the spy pilot Powers for the Soviet illegal intelligence officer Rudolf Abel, aka William Fischer. Many believe that this is the first exchange in storiesbut it is not. Spies and just foreign citizens were changed until 1962.

Interest in this topic is quite large and from time to time is fueled by new stories. One recent example is former Marine Paul Whelan, convicted of espionage in Russia. He was detained in Moscow by FSB officers at the end of 2018 and subsequently sentenced to 16 years. Whelan is currently serving a sentence in a Mordovian colony.

An American convicted in Russia for espionage can be exchanged for one of the Russians. About this in February 2021 to the journalists of RIA News told his lawyer Vladimir Zherebenkov. At the same time, the lawyer did not give any names, noting that

"Earlier, in connection with the exchange of Paul Whelan, the names of Yaroshenko and Bout serving sentences in the US surfaced, but now we are talking about some of the programmers."
According to the lawyer, the American special services will be able to start negotiations on the exchange only if there is a presidential order. Whelan's lawyer believes that some kind of command from Biden regarding the exchange has already been given.

In the USSR, the practice of exchanging "spies" was used already in the 1930s. Then the Soviet Union was actively helping out its intelligence officers who worked in China. The most famous case is associated with the exchange of Yakov Bronin for Jiying Jingguo. Jingguo was arrested in Sverdlovsk after the arrest in Shanghai of Yakov Bronin. Bronin from 1933 to 1935 was a resident of Soviet intelligence in China. In this post, he replaced the famous Soviet intelligence officer Richard Sorge.

Yakov Bronin was arrested by China's counterintelligence and sentenced to 15 years in prison. From 1935 to 1937, he was held in a prison in the Chinese city of Wuhan, the existence of which today is already known to every inhabitant of our planet. In 1937, Bronin was exchanged for Jiying Jingguo. It is worth noting that the latter was not an ordinary Chinese, he was the son of Marshal Chiang Kai-shek.

He moved to the USSR back in 1925. The 15-year-old son of the leader of the Kuomintang party arrived in the Soviet Union to study and built a successful career, having learned Russian and received an education, joined the Komsomol. In the USSR, he took the name Nikolai Vladimirovich Elizarov. In 1932 he moved to Sverdlovsk, where he worked at Uralmash, and was also the editor of the newspaper For Heavy Engineering. In the same place in Sverdlovsk, he married Faina Vakhreva and became the father of two children. 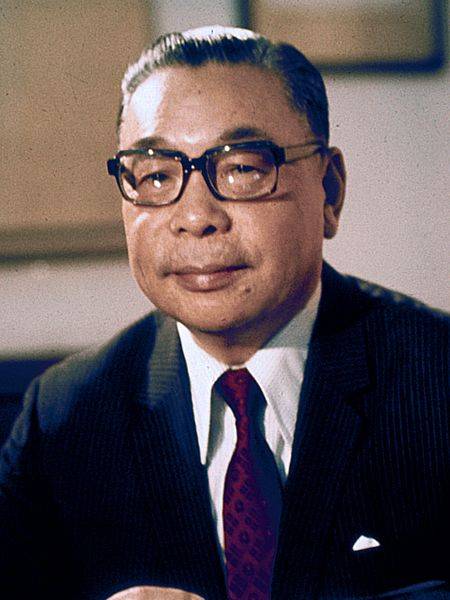 Jiying jingguo
It is believed that the USSR leadership decided to go for an exchange only after an unsuccessful attempt to free the Soviet resident during special operations. Then it was decided to go the other way. The son of Marshal Chiang Kai-shek was arrested in Sverdlovsk. This was followed by an offer, which Chiang Kai-shek could not refuse, and in March 1937, the marshal's son was exchanged for the Soviet intelligence officer Yakov Bronin.

It is worth noting that both in life everything worked out quite well. Yakov Bronin, returning to the USSR, did not fall into the millstones of the Great Terror, which engulfed his immediate superior, Yan Berzin, and hundreds of high-ranking Soviet intelligence officers. At the same time, in 1949 he was still repressed, but rehabilitated in 1955. A native of the city of Tukums, he lived a long life, Yakov Bronin died in 1984.

At the same time, Jiying Jingguo served as President of the Republic of China (Taiwan) from 1978 to 1988, having managed to be re-elected for a second term. Under his rule, martial law was abolished in the country, a course towards democratic construction was taken, and the country's economy was developing rapidly. Moreover, Faina Vakhreva (Jiang Fanliang), orphaned at an early age and raised in Sverdlovsk, was the first lady of the Republic of China.

The most famous exchange in history

The most famous spy exchange in history took place, perhaps, on February 10, 1962, and the bridge on which the exchange took place has forever gone down in history as a spy bridge. On this winter day, on the Glienicke Bridge in Germany, exactly in the middle of which the border between West Berlin and the GDR was then exchanged, the American spy pilot Powers was exchanged for the illegal Soviet intelligence officer Abel. 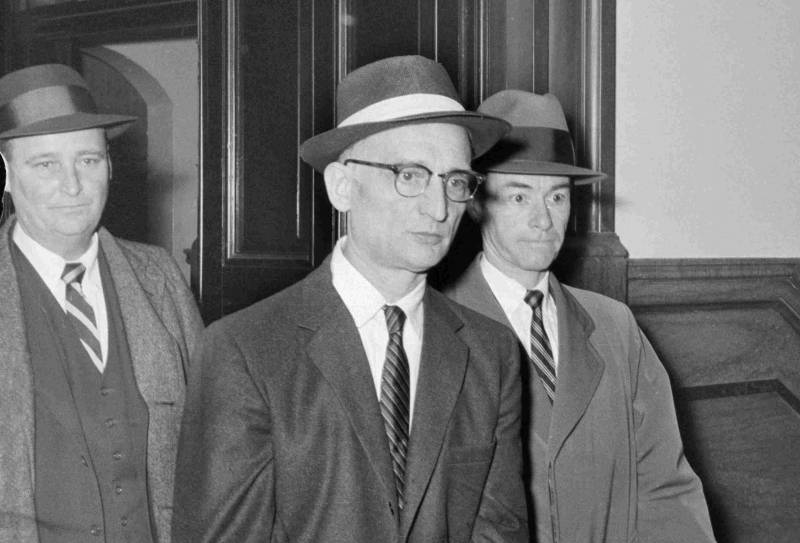 Rudolph Abel (real name William Genrikhovich Fischer)
This event aroused great interest already in those years and was widely covered in the press. In the Soviet Union, based on these events, the feature film Dead Season was shot in 1968, while Rudolf Abel himself took part in the creation of the picture. And not so long ago, in 2015, another picture based on this story was released. This time, the film, which was called "Spy Bridge", was filmed in the United States by director Steven Spielberg.

As we already understood, cases of exchange of spies and prisoners between countries existed before, but it was in 1962 that the story received really wide publicity, the events were covered in the media. Moreover, the exchange itself was agreed at the highest level with the direct participation of the highest political circles of the USSR and the USA.

It should be said here that the Soviet Union was lucky with the American pilot, first of all, with the fact that he survived after his U-2 reconnaissance aircraft was shot down in the sky over the Sverdlovsk region. By that time, the illegal Soviet intelligence agent Rudolf Abel had been arrested. In the United States, Abel worked as an illegal intelligence agent since 1948. In June 1957, he was arrested, after which the court sentenced him to 35 years in prison.

Francis Gary Powers, whose plane was shot down over the USSR during a reconnaissance flight on May 1, 1960, became a figure that Washington was ready to exchange for Abel. Also included in the exchange deal was US economics student Frederick Pryor, who was arrested in August 1961 for espionage in East Berlin.

After returning to the USSR, Rudolf Abel underwent a course of treatment, rested and returned to work, training illegal intelligence officers. In addition to working in the central intelligence apparatus, William Fisher painted landscapes in his spare time. The famous scout died on November 15, 1971 from lung cancer. 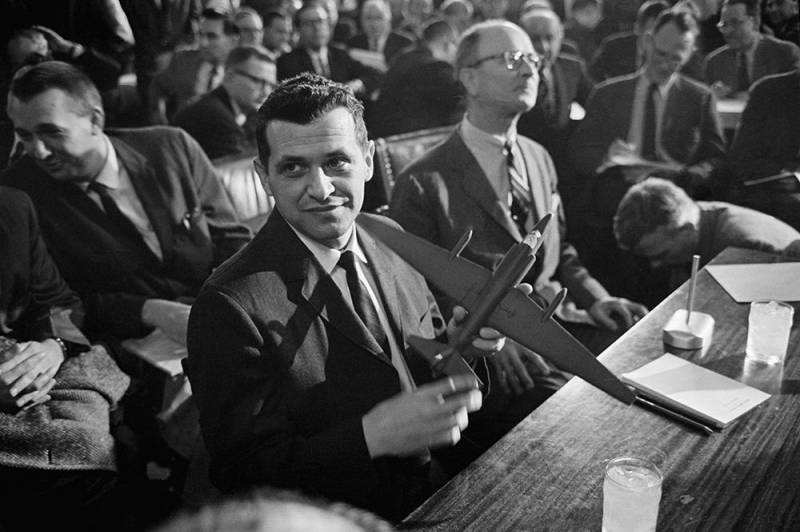 Francis Gary Powers
Francis Gary Powers, returning to the United States, received a rather cold welcome. He was accused of not destroying secret equipment on the plane and not committing suicide, although he was issued a special poisoned needle by the CIA. Ultimately, the Senate Arms Committee dropped all charges against him. Powers continued his service until 1970 in aviation, but no longer dealt with intelligence, in particular, he was a test pilot of the Lockheed company. Died at the age of 47 on August 1, 1977 in Los Angeles in a plane crash. At that time Paeurs was already a civil aviation pilot, on the day of his death he was piloting a helicopter of the radio and television news agency KNBC.

The most massive exchange in history

The Gliniki Bridge was used more than once for exchange between the two superpowers during the Cold War. For example, two years after the most famous exchange, the British Greville Wynn was exchanged for the Soviet agent Konon Molodoy. At the same time, it was he, and not Abel, who became the prototype of the protagonist of the Russian film "Dead Season". On the same bridge, but already in 1985, the largest spy exchange in history took place.

On June 11, 1985, 23 CIA agents, who at that time were in the prisons of the GDR and Poland, went to the West over this bridge, some for quite a long time. In turn, the USSR received four Eastern Bloc agents, among whom was the famous Polish agent Marian Zakharski.

Negotiations on this massive exchange, which ultimately ended well, have been going on for eight years. At the same time, they began with a discussion of the release of a person who was not among those who received freedom that day. It was about the Soviet human rights activist Anatoly Sharansky. 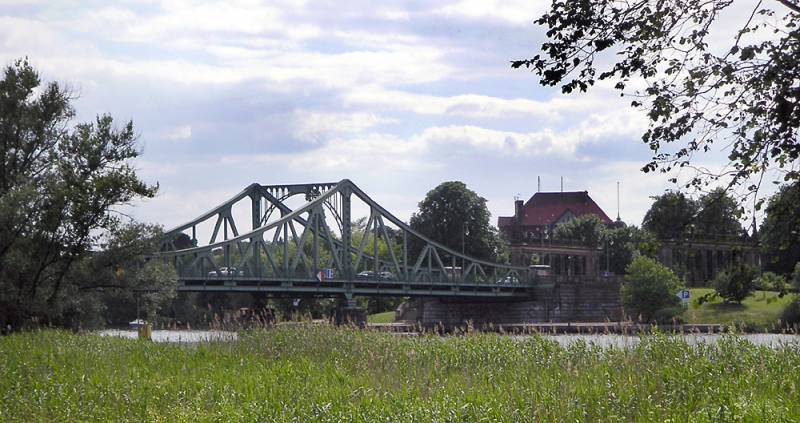 The same Glinik Bridge, view from Berlin
As a result, Natan Sharansky was exchanged on February 11, 1986 after numerous demonstrations around the world, as well as a personal petition of the largest politicians in the United States and Europe. The reason for the failure of the exchange in 1985 was that Moscow demanded that the US government acknowledge that the Russian dissident, who was sentenced to 1978 years in prison in July 13, was spying for the CIA. At the same time, US President Jimmy Carter refused to trade a human rights defender for a spy.

The largest spy exchange in history took place at noon on June 11, 1985. The Americans brought four former intelligence officers to the bridge in a Chevrolet van. Among them were:

- Polish intelligence officer Marian Zakharski, who was sentenced to life imprisonment in 1981 for his activities in establishing plans for the US armed forces;

- Peña Kostadinov, former Trade Attaché at the Bulgarian Embassy in Washington, DC, arrested by the FBI in 1983 while receiving confidential government documents;

- physicist from the GDR Alfred Zee, who transmitted secret information about the US Navy to East Berlin and was arrested in 1983 at a conference in Boston;

- the fourth participant in the exchange was Alisa Michelson, a citizen of the GDR, as well as a KGB courier, the woman was detained in 1984 at the Kennedy Airport in New York.

From the Soviet side, a bus arrived at the bridge with 25 passengers, two of them decided to stay in the GDR, and 23 people crossed the bridge to the West. Among the transferred prisoners, in addition to citizens of the GDR, there were also six Poles and one Austrian. Many of them at that time had many years or life sentences for espionage.

Anna Chapman. Instead of an epilogue

History does not stand still, and the spy exchange process has not stopped, even though the Cold War has ended. Relatively recently, in 2010, another mass exchange of persons took place, which the United States and Russia accused of intelligence activities. The exchange took place at the Vienna airport, and the whole story was called the "Spy Scandal". 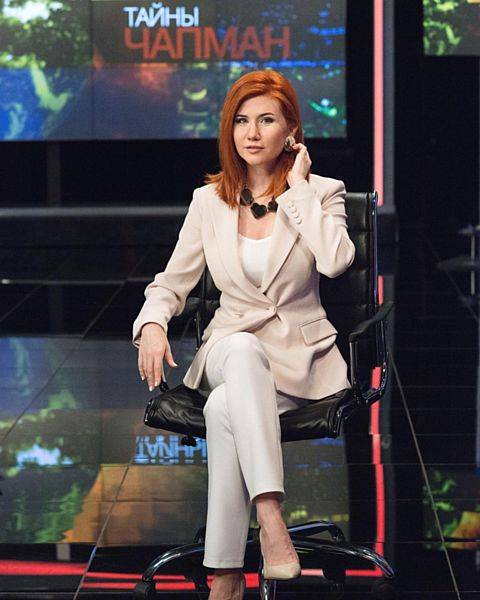 Anna Chapman, photo instagram.com/anya.chapman
The most famous among them was Anna Chapman, who, after her arrest, turned into a media personality in Russia. The media almost immediately labeled the girl as a sex symbol. At the same time, after returning to Russia, Chapman launched a career in television, starting a collaboration with the Ren TV channel, on which she still broadcasts the Chapman Mystery.

In exchange for the agents detained in the United States, whom the Foreign Intelligence Service Colonel Alexander Poteev surrendered to the United States, Russia extradited four prisoners who were already serving their sentences in our country. They were accused of espionage on the United States and Great Britain: former SVR and GRU officers Alexander Zaporozhsky and Sergei Skripal, former deputy head of the security service of the NTV Plus television company Gennady Vasilenko and former head of the US and Canada Institute of the Russian Academy of Sciences Igor Sutyagin. As we know, the story of one of them - Sergei Skripal, in fact, cannot end until now.