At the meeting of the National Security and Defense Council of Ukraine, a "secret decision" was made on the issues of actions in Donbass 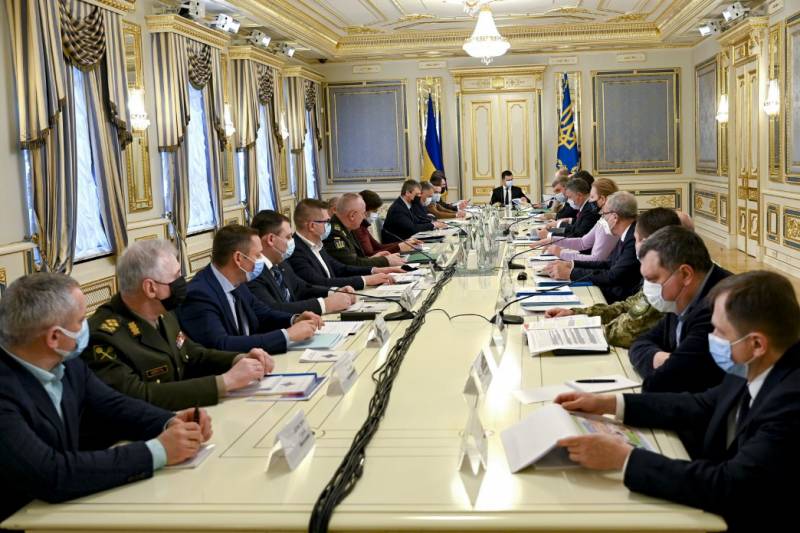 A meeting of the National Security and Defense Council was held in Ukraine, which was called secret. But, despite the declared secrecy, certain information still leaked to the media.


Thus, it is reported that NSDC Secretary Alexei Danilov raised the topic of the exacerbation of the situation in Donbass. Reportedly, in connection with “the increased activity of the enemy”, a “secret decision” was made on the issues of actions in the JFO zone, in the Donbass. Recall that the JFO is an operation of the so-called joint forces.

Danilov, answering a question from journalists, said that he could not detail the details of the decisions made because of "their secrecy."

It is known that during the meeting of the National Security and Defense Council under the President of Ukraine, reports were heard by the commander-in-chief of the Armed Forces of Ukraine Ruslan Khomchak, the head of the Main Intelligence Directorate, Colonel Kirill Budanov, and the head of the foreign intelligence service, Lieutenant General Valery Kondratyuk.

As reported, they reported to the President on the operational situation in the JFO zone, named the most difficult areas along the contact line.

Aleksey Danilov once again emphasized that commanders on the ground were given the right to issue orders "for return fire to kill" without consulting the higher command of the Armed Forces of Ukraine.

At the meeting of the NSDC, it was announced that the situation in Donbass was aggravating, while the Ukrainian side traditionally places full responsibility for this aggravation on the DPR people's militia.

Meanwhile, the DPR confirmed the fact of the loss of their serviceman. It is noted that he was wounded, incompatible with life, near Gorlovka. The DPR NM command notes that the Ukrainian side opened mortar fire on the area of ​​the Gagarin mine settlement. The fire was carried out by the Ukrainian military from the positions of the 503rd separate battalion of marines of the Armed Forces of Ukraine.

It is no longer a secret to anyone that Ukrainian President Volodymyr Zelensky is not going to fulfill his election promises to end the war in Donbass.

Ctrl Enter
Noticed oshЫbku Highlight text and press. Ctrl + Enter
We are
Reports from the militia of New Russia for 27-28 September 2014 of the yearYuri Drozdov: Russia prepared the role of the sacrificial calf
Military Reviewin Yandex News
Military Reviewin Google News
95 comments
Information
Dear reader, to leave comments on the publication, you must sign in.