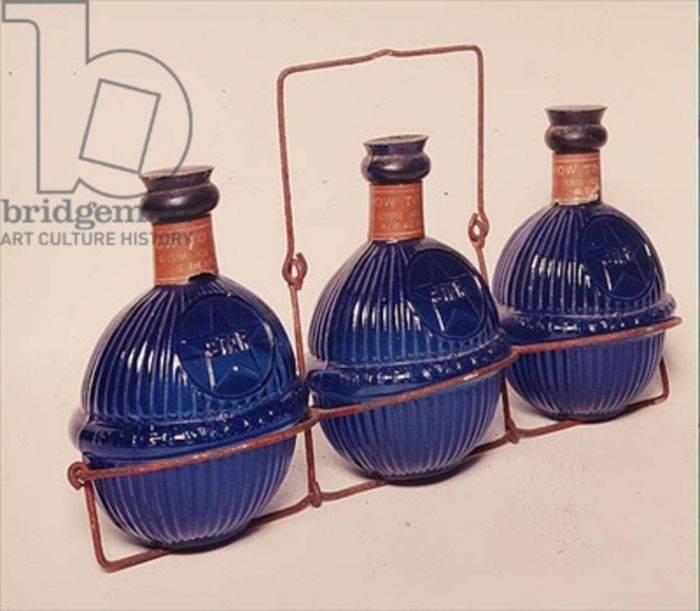 Today, in the mind of any person, a pomegranate is weapon, a means of killing other people. However, such statements are not always true, there are grenades that are designed to save human lives. These are the predecessors of modern fire extinguishers. One of the most famous was Harden's hand grenade. Harden's grenade fought fire and was marketed in the US and Europe in the late XNUMXth century.

Devices widespread at the end of the 01th century, it would seem, should have disappeared after the appearance of numerous types of fire extinguishers. But this is not the case. Fire extinguishing grenades can still be found on the market today, such as the Rescuer 119 model (SATXNUMX). This model does not differ so much from its predecessors, which appeared many decades ago.

The first fire-fighting equipment in history

The designer suggested placing a small container for gunpowder into an ordinary wooden barrel filled with water, into which a fuse was inserted. During the fire, the fuse was set on fire, and a wooden shell filled with water was thrown into the fire. The barrel exploded and flooded some area around it. Such a device coped with fires, not to say that well, but still at least some effect from such a device was, especially in comparison with manually pouring the flame with water. 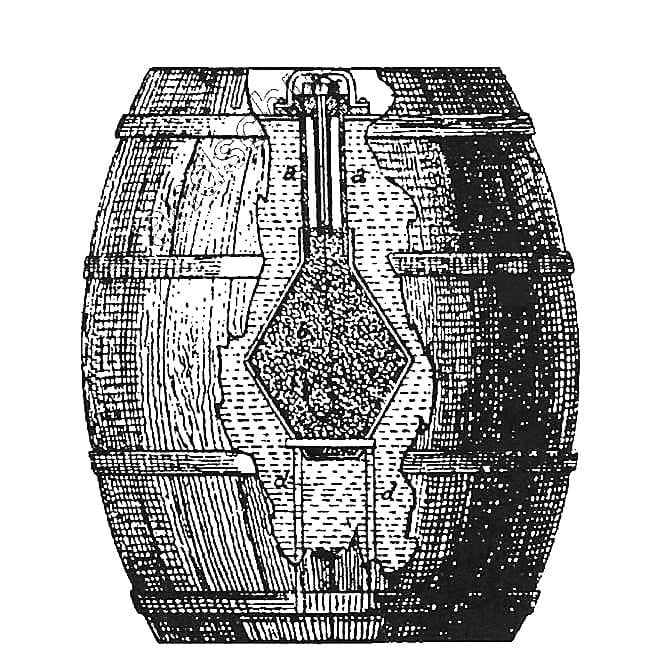 20 liter barrel with powder charge
The design of such devices was improved only after a hundred years. So, the English inventor Captain George Manby in 1813 proposed to fill in containers not just water, but potash. So in those years they called potassium carbonate or potassium carbonate. The powder dissolved in water was placed in a copper vessel. As a result, the liquid under pressure, when turning the valve on the vessel, burst out and could extinguish the fires. This device was more like modern fire extinguishers.

The capacity of the copper vessel was 13 liters, it was transported on a special trolley. This device became one of the most famous inventions of Manby, who worked a lot on the creation of fire fighting equipment, as well as various devices for saving people in case of fire. Interest in this topic was not idle. George Manby witnessed the terrible fire in Edinburgh, which claimed a large number of human lives, so he was so actively interested in this topic.

In 1871, a new means of extinguishing fires appeared on the market - a fire grenade. The device was patented under his own name by the American inventor Henry Harden, who lived in Chicago. The patent was issued for the device "Harden's Garnet No. 1". The invention of the American designer was a glass flask filled with an aqueous solution of salts. This solution was effective for fighting fire, and the flask itself had to be thrown into the fire. The capacity of Harden's grenades and similar fire-fighting devices usually ranged from 700 ml to one liter.

Despite the limited use of such devices and insufficient efficiency, they existed in various forms for a long time. With minor changes, they were produced and used from the 1870s to the 50s of the XX century. Moreover, they were most widely used only until the 1910s. But even today, fire grenades or throwing fire extinguishers are still on the market, although their shape has changed over the years, and the chemical composition has become much more effective. 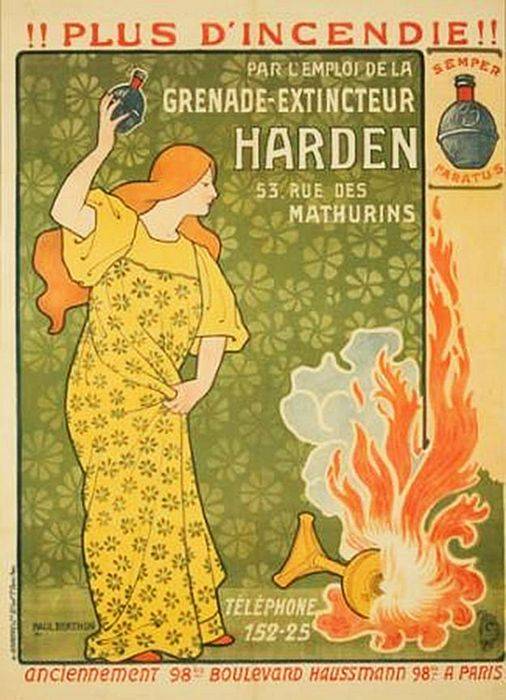 Harden's invention was actively sold on the American market, until in 1877 manufacturers in Great Britain were interested. So the device ended up in the Old World, where it was produced by many English companies, among which were HardenStar and Lewisand Sinclair Company Ltd. Later on, production only expanded and was transferred to other factories in the USA and Europe.

Advertisements and posters from the late XNUMXth century promised that:

Harden's Star Hand Grenade will save your life and property in case of fire. If broken, the liquid containing the chemical in the bottle will immediately extinguish the fire! The contents of the flask do not freeze or deteriorate over time. "

According to the handouts, Harden's grenades could be purchased for $ 45 for a dozen.

Harden's pomegranate attracted customers because it was as easy to use as possible. The grenade had to be thrown into the fire, the glass shattered, releasing the contents. Initially, a special liquid, carbon tetrachloride (tetrachloromethane), flowed out of the tank, which helps to extinguish an open flame.

Moreover, this substance is extremely toxic and dangerous to humans. Therefore, over time, the entire human-centered business switched to safer filling, replacing the truly hellish mixture with brine. True, in this case, most likely, the fire-fighting properties of the device itself suffered to some extent. On the other hand, the risk of dying not from a fire, but from the means of extinguishing it, was reduced by several times. 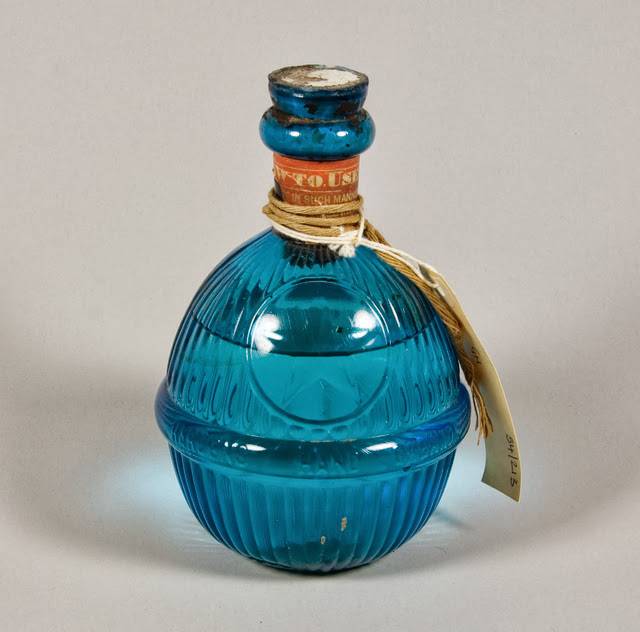 Harden's Star Hand Grenade
For many years the main producer of pomegranates was the Harden factory in Chicago. It was here that the most popular hand fire grenades were produced, which today are highly valued by collectors and antiques lovers around the world. At the same time, on special forums where such exhibits can be found, buyers are honestly warned that the multi-colored flasks contained a liquid that is very dangerous for humans.

Usually, Harden's grenades were plugged with a stopper, and some had a special loop attached to the neck, which allowed them to hang throw fire extinguishers on the wall. The pomegranates, which were produced in Chicago, were distinguished by a very bright appearance, resembling perfume bottles with a neck. Advertisements from those years said that real Harden grenades were made of blue glass and had a star-shaped embossing on the case. Hence, another name common in those years - Harden's hand grenade "Star".

Despite the fact that today you will no longer surprise anyone with a fire extinguisher, which must be in any passenger car, fire grenades are still on the market. Fire grenades or throw extinguishers can be used to extinguish fires in apartments, offices, schools, hospitals, public transport, and crowded areas.

These products remain on the market due to a number of factors, the main one being ease of use. A person just needs to throw a fire grenade into the fire. Simplicity is very important, since in stressful situations people often get lost and start to get nervous; in such conditions, not everyone is able to properly use the most common fire extinguisher. Another benefit of fire grenades, resulting from their ease of use, is that they can be used by people of all ages. The advantage is the low weight of such devices.


An example of modern fire extinguishing grenades is the Rescuer-01 device (SAT119). This throwing fire extinguisher can be easily found on the internet, as well as videos showing its ability to fight open flames. This grenade is a tank filled with a special composition of water and chemicals that neutralize fire.

The user just needs to throw the device into the flame, the flask will break, and the liquid with the chemical will begin to act. The water from the pomegranate lowers the combustion temperature, and the emitted carbon dioxide and ammonia gases neutralize oxygen, depriving the fire of the nutrient medium. This fire grenade is especially effective in the early stages of a fire, whereby the chemicals neutralize combustion over a much larger area than spreading water. 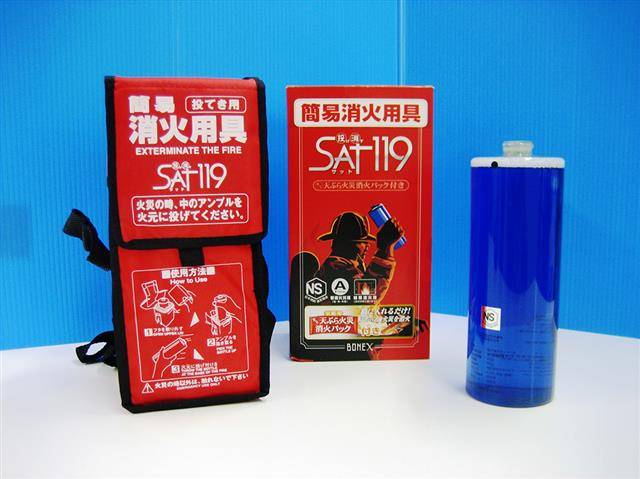 Fire grenade, throw extinguisher SAT119
The device is able to extinguish a fire on an area of ​​8-15 square meters. This is enough to put out a starting fire in an apartment or office. Carbon dioxide blocks the access of oxygen to the fire site, and phosphate and ammonium bicarbonate stop the combustion reaction. At the same time, the Rescuer - 01 fire grenade (SAT119) is environmentally friendly, it does not harm the environment and humans. A side effect is the smell of ammonia, but although it is not pleasant for a person, it does not pose any harm.