The reasons for attempts to abandon the use of the spacesuit in flight Yu.A. Gagarin 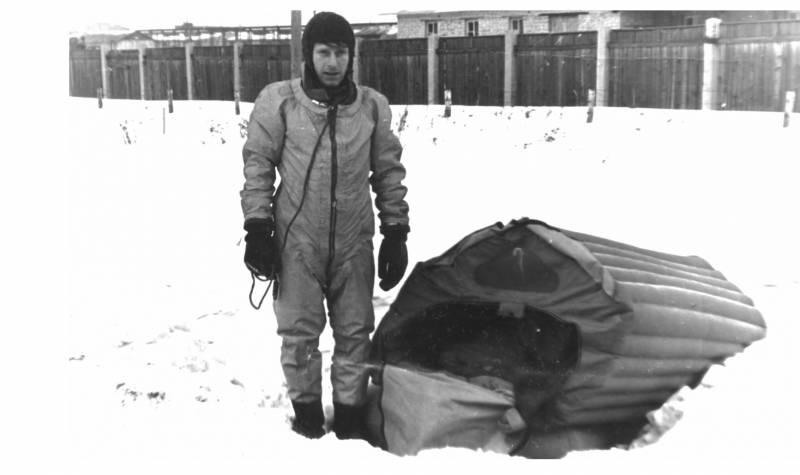 The path to the first manned space flight was difficult. And some details of preparation for it are still known only to a narrow circle of specialists and amateurs. stories cosmonautics.

Instead of a spacesuit, a protective suit?

However, in February 1960 (less than 1,5 years before the first flight), when the prototypes of the SK S-10 were already tested at the GNII A&KM, work on it was stopped. And before Zvezda, the customers of protective equipment and rescue equipment for a manned spacecraft from OKB-1 (headed by K.P. Feoktistov) set a new task - to develop a protective suit instead of a spacesuit, which is necessary, first of all, for rescue during a splashdown.

The main reason for the attempt to abandon the use of the spacesuit was the limit of the payload weight of the Vostok spacecraft put into orbit. And in the fact that (based on data on the absence of depressurization during flights of artificial earth satellites), the ship's developers considered the probability of capsule depressurization in flight as an unlikely and "off-design" event.

The Vostok launch vehicle was significantly more powerful than the Redstone rocket. But the Vostok spacecraft also weighed not two, but 4,6 tons. Unlike the spacecraft "Mercury" with a primitive coolant providing a 100% oxygen environment and a pressure inside the cabin of 0,3 kgf / cm2, the spacecraft "Vostok" possessed a full-fledged coolant designed for a 10-day flight and was able to maintain a gas environment in the capsule close to to the terrestrial air atmosphere (pressure in the cabin 600–900 mm Hg at 21% oxygen in the medium).

In addition, the Vostok spacecraft was supplied with an ejection seat capable of rescuing an astronaut not only during an accident at the launch pad, but also in the early stages of launching into orbit.

While the spacecraft "Mercury" lacked a seat as such - its function was performed by a special bed inside the cockpit. From the very beginning of the creation of the coolant for long-term flights of the Vostok spacecraft, power and water supply was provided with an open glazing of the pressure helmet, and a full-fledged sewage system was used for the administration of natural needs.

Naturally, among the designers from OKB-1, the opinion was widespread that the risk of depressurization of the KK cabin is much lower than that of other abnormal accidents. Therefore, the weight deficit could be reduced by abandoning the use of a spacesuit and the coolant necessary for it. In February 1960, Zvezda began to develop a protective suit called "V-3".

Rescue suit of the astronaut V-3

The main purpose of the V-3 protective suit was to provide protection for an astronaut in case of landing in a deserted area or splashing down into cold water. At its core, the V-3 was a variation of the marine rescue kit adapted for use in the Vostok spacecraft.

The set consisted of a jumpsuit that had an outer (protective) and an inner (hermetic) shell, a heat-protective suit (TZK) made of quilted foam rubber and woolen knitwear worn under the jumpsuit. The suit was ventilated with cabin air from an autonomous ventilation unit.

Plant No. 918 (JSC NPP Zvezda) manufactured eight products, some of which were sent for physiological tests at the State Research Institute of A&KM and LII for practicing parachute jumps.

On the "Zvezda" itself, twelve-hour experiments were carried out on staying in ice water, as well as two-day experiments on survival in a deserted area in winter conditions.

After OKB-1 made a decision to abandon the use of a spacesuit, military doctors of the Air Force Research Institute of A&KM and civil physiologists of Aerospace Medicine Department No. 8 of Plant No. 918 GKAT at all meetings continued to stubbornly prove the need for SC.

In August 1960, an interdepartmental meeting was held, in which S.P. Korolev, K.P. Feoktistov (OKB-1), S.M. Alekseev ("Star"), M.I. Vakar and L.G. Golovkin (GNII AiKM), A.V. Pokrovsky (from department No. 8, the first head of the medical department of "Stars"), A.P. Popov (former chief physician of the Air Force - deputy head of department No. 8) and others.

The main customer of these products of Plant No. 918 GKAT, the chief designer of OKB-1 Sergey Pavlovich Korolev, personally put an end to the heated discussion of the designers-developers and doctors. He agreed to allocate up to 500 kg of mass, severely limiting the development time of the SK, which was supposed to be ready by the end of 1960.

In September 1960, seven months before the Vostok-1 launch, work began on the creation of the first SK-1 cosmonaut spacesuit based on the Vorkuta aviation spacesuit.

But this is a completely different story ...

Ctrl Enter
Noticed oshЫbku Highlight text and press. Ctrl + Enter
We are
Gagarin's alternative spacesuit: what was it like?List of destroyed the largest and most high-tech enterprises
Military Reviewin Yandex News
Military Reviewin Google News
24 comments
Information
Dear reader, to leave comments on the publication, you must sign in.