We keep our finger on the pulse. In Sochi, the issue of the new Constitution of Syria is being resolved 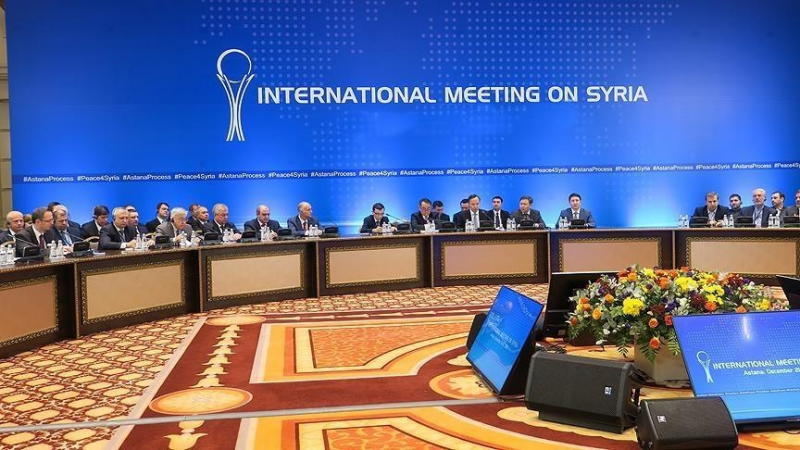 "Astana format" as a necessity

For a long time, the international community failed to interrupt the bloodshed on Syrian soil. The attempts of the United Nations, which, it would seem, should first of all, take effective collective measures to de-escalate the conflict, turned out in vain. Later, there was a Geneva format, to which the Europeans invited representatives of terrorist organizations, which caused a natural negative reaction from Russia. When outspoken thugs participate in the negotiations, it is very difficult to find a compromise and the Geneva format eventually stalled. In addition, American and European diplomats tried in every possible way to act according to the old scheme, entering into dialogue with the “governments in exile” in Istanbul, Riyadh, Europe and the United States. The conversation was conducted at best with immigrants who did not have real support at home. In the worst case, they tried to establish a dialogue with foreign emissaries of terrorist groups. The only way out was an attempt to bring the current government and opposition representatives to the negotiating table. Let us emphasize that it is the opposition, not the terrorists, as Western partners have repeatedly tried to do. 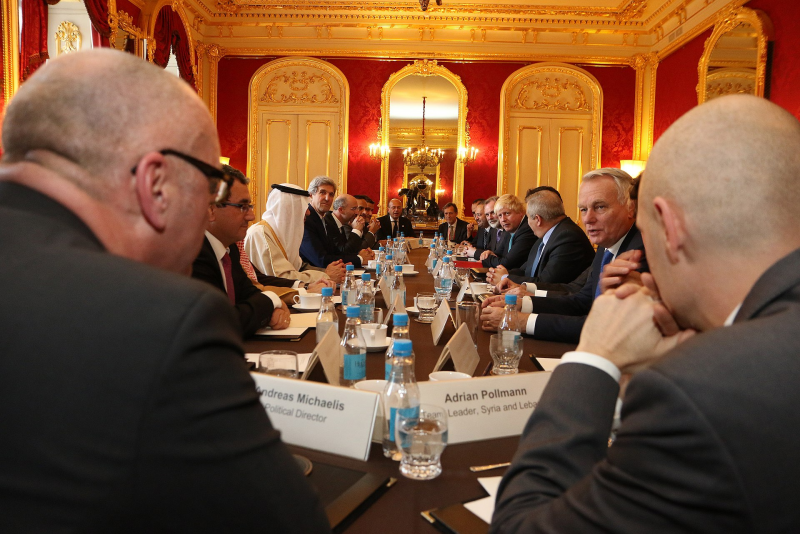 Photo: Foreign and Commonwealth Office / flickr.com
Countries of the "Astana format" Russia, Turkey and Iran, according to one of its initiators, Sergei Lavrov
“Organized a format in which the government and the opposition, who fought against it with weapons in hand. This is how we managed to hold the Congress of the Syrian National Dialogue, to convene the Constitutional Committee, and this is how the ceasefire was established in a significant part of Syria. "
Since the end of 2016, by joint efforts, it has been possible to reduce the degree of hostilities, exchange prisoners, organize the supply of humanitarian aid and search for the missing. In many ways, it was the “Astana format” that made it possible to preserve the territorial integrity of Syria, torn apart in parts by external and internal forces.
From the very first meeting of the peacekeeping troika of Russia, Turkey and Iran in Astana, the question of the future Constitution of Syria was raised. The draft of the new basic law of the country was presented to opposition representatives on January 24, 2017. A few months later, in May, the first successes were achieved - a Memorandum was signed on the creation of "four security zones" (de-escalation), the formation of corridors for humanitarian aid and a ban on the use of any weapons within these territories.
The return of refugees to their territories is currently a serious problem. According to the estimates of the Permanent Representative of Russia to the UN Vasily Nebenz, more than 1,5 million people have returned to Syria, but about 6,5 million are forced to hide in Iraq, Jordan, Turkey, Lebanon and other countries. Such a huge number of working hands will be very useful in restoring a country plunged into devastation in fact during the Middle Ages. This, incidentally, is in the interests of states that are forced to bear the burden of social security for refugee camps and maintaining order. But people will return only to a peaceful Syria, which is impossible without a unified Constitution that satisfies the interests of both the ruling Alawite minority and the opposition, consisting of the Sunni majority.

The situation around the “Astana format” is complicated by its versatility. On the territory of the country, in fact, in the status of occupation forces, considerable forces of the United States are based, ensuring the uncontrolled pumping of Syrian oil. The Americans are trying in every possible way to abstract themselves from the peace process, prioritizing the immediate removal of Bashar al-Assad from power. The delegation from Washington did not come to the meeting in Sochi even in observer status, although diplomats from the United States were present at the early meetings of the "Astana format". This clearly shows the strategy of behavior of the new owner of the White House, Joe Biden, who intends to support any forces in the region, except for the recognized opposition and the legitimate authority of Assad. At the same time, no one in the UN is particularly embarrassed by the fact that the United States tramples on all norms of international law, even by its presence on the territory of sovereign Syria. At the same time, there is a possibility of further expansion of the American military presence in the region. Federation Council member Alexei Pushkov commented on the possible future:
“I think the Biden administration will continue to maintain and even increase the military presence in Syria. And hardly any agreements between Russia and the USA are possible here. "
Analyst Yuri Lyamin echoes the parliamentarian:
“The situation in Syria, for example, is not so easy, and the conflict can break out at any moment, and the Americans can easily take advantage of this. Therefore, one should not rule out another round of armed confrontation with the militants in the summer or autumn. " 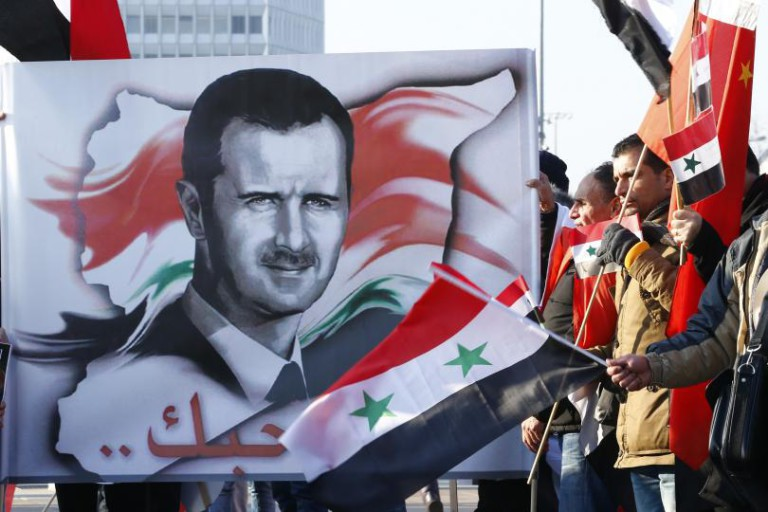 Within the troika of peacekeepers, not everything is all right either. Turkey, which sometimes balances with its main partner - Russia, almost on the brink of war, actively opposes the Kurds, and in general is very critical against Damascus. At the same time, the Constitutional Committee will have to take into account the opinion of the Syrian Kurds, as one of the most important fighters against terrorism in the region. This, of course, will be opposed in every possible way by Erdogan, who is not interested in creating Kurdish autonomy near his borders. In such a situation, Russian diplomacy cannot be envied - on the one hand, you cannot surrender the Kurds to be devoured by the Turks, and, on the other hand, it is not at all in hand to quarrel with Ankara over this. At the same time, Turkey also has to maneuver. Unlike Vladimir Putin, Recep Erdogan definitely gravitates towards the Syrian opposition and is constantly increasing cooperation in the military and political spheres. Moreover, the Turks sometimes offer cooperation to openly terrorist groups. The example of Khatash, banned in Russia, perfectly illustrates Turkey's ambivalent policy within the framework of the “Astana format”. The terrorist gang for some time refused to have any relations with Turkey and criticized the Ahrar al-Sham and Nur ed-Din Ed-Zenki movements (banned in Russia) for cooperation with Turkey on diplomatic and military issues. Khatash's attitude towards Turkey suddenly changed after the organization openly supported the Turkish armed forces in taking over positions in the north-western regions and establishing checkpoints there. 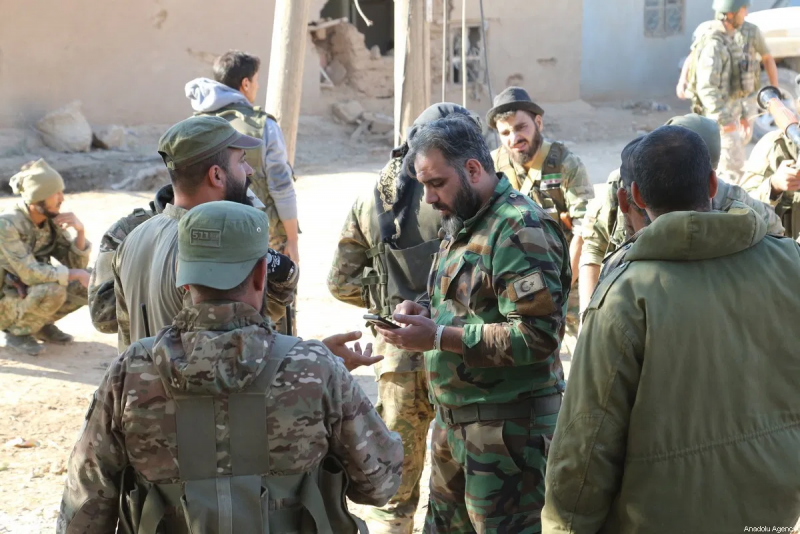 A source: Anadolu Agency
Russia has to constantly keep its finger on the pulse of the Syrian peace settlement - the situation in the region can change very rapidly. The opposition at the talks is very cautious about the prospects for the fight against terrorists. For many, this means going over to the side of Bashar al-Assad. It seems that the players in the conflict themselves have not completely decided who should be classified as opposition and who should be terrorists.
But all these contradictions are not supplemented by alignments around the new Syrian Constitution. Obviously, feeling support from Russia, official Damascus is in every possible way delaying the approval of the section of the basic law concerning the national principles of the country's structure. At the same time, the opposition, represented by its representative, Ahmed Thom, is verbally ready for a constructive dialogue:
“A statement about the failure of the work of the Constitutional Committee will be a bad outcome for everyone. We intend to continue working and look forward to pressure from the international community on Damascus, especially on Russia's role in this. ”
All this makes the final of the Astana format talks in Sochi rather unpredictable. Even if Damascus will make concessions in the national principles of the Constitution, then for considerable benefits in other areas. It is difficult to predict how much this will suit the opposition and other participants. Only one thing is known - the tightly tied "Syrian knot" is still very far from a peaceful settlement. And this is due to the collision of interests of several world and regional powers at once.

Ctrl Enter
Noticed oshЫbku Highlight text and press. Ctrl + Enter
We are
Situational analysis of the death of the MH17 flight (Malaysian Boeing 777), made on the basis of engineering analysis from 15.08.2014Results of the week. “You can legally go. It is difficult to reach
Military Reviewin Yandex News
Military Reviewin Google News
66 comments
Information
Dear reader, to leave comments on the publication, you must sign in.