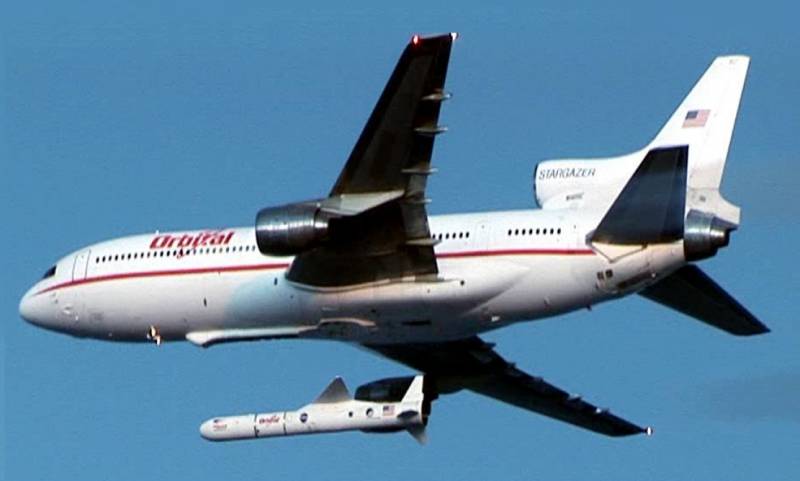 Since the middle of the last century, the concept of an aerospace system with an air launch has been worked out in different countries. It provides for the output of the load into orbit using a carrier rocket launched from an airplane or other aircraft. This launch method imposes restrictions on the payload mass, but is economical and easy to prepare. At various times, a lot of air launch projects were proposed, and some even reached full operation.

The most successful air-launched aerospace system (AKS) project to date was launched in the late eighties. The American corporation Orbital Sciense (now part of Northrop Grumman), with the participation of Scaled Composites, has developed the Pegasus system based on the launch vehicle of the same name.

The three-stage Pegasus rocket has a length of 16,9 m and a launch weight of 18,5 tons. All stages are equipped with solid-propellant engines. The first stage, responsible for atmospheric flight, is equipped with a delta wing. There is a compartment with a length of 2,1 m and a diameter of 1,18 m to accommodate the payload. The load weight is 443 kg. 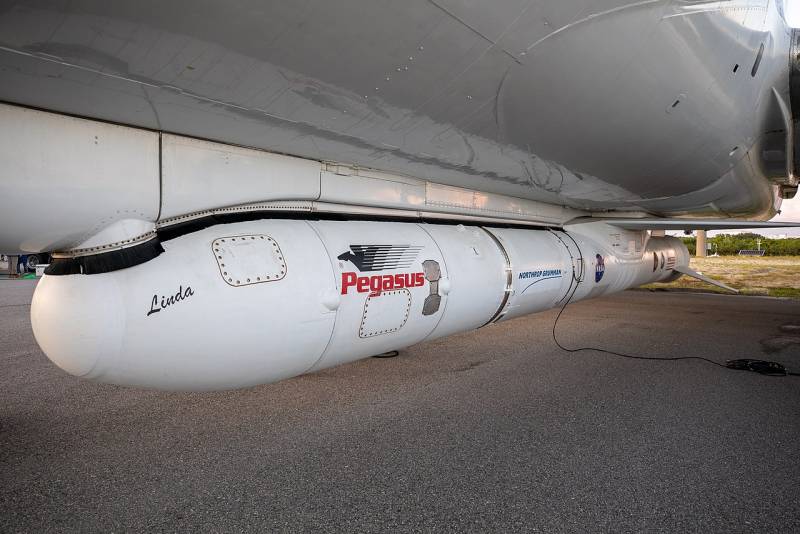 Pegasus XL on carrier suspension. Photo by NASA
In 1994, the Pegasus XL rocket was presented with a length of 17,6 m and a mass of 23,13 tons. Due to the increase in size and weight, new engines were introduced. The XL product is distinguished by its increased energy and flight characteristics, which allows it to reach higher orbits or carry a heavier load.

A modified B-52H bomber was originally used as the carrier of the Pegasus rocket. Then the Lockheed L-1011 liner was rebuilt into the carrier. The aircraft with its own name Stargazer received an external suspension for one rocket and various equipment for launch control.

AKS Pegasus launches are made from several sites in the United States and beyond. The launch technique is quite simple. The carrier aircraft enters the specified area and occupies an altitude of 12 thousand meters, after which the rocket is dropped. The Pegasus product plans for a few seconds and then starts the first stage engine. The total operating time of the three engines is 220 sec. This is enough to bring the load into low Earth orbits. 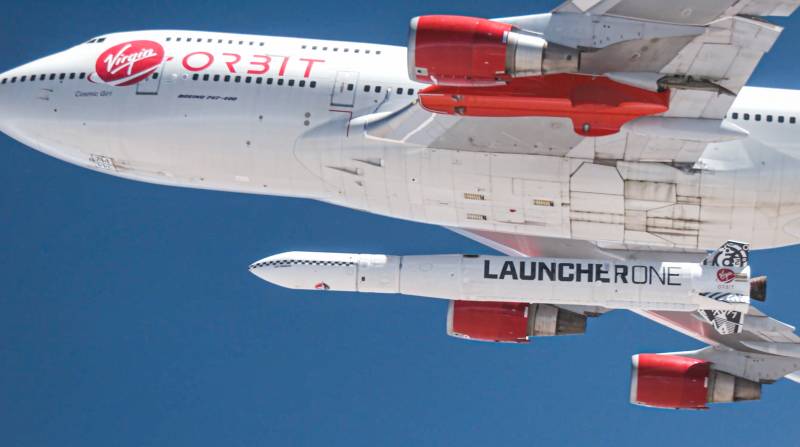 LauncherOne rocket export tests, July 2019 Photo by Virgin Orbit
The first launch of the Pegasus rocket from the B-52H took place in April 1990. In 1994, a new carrier aircraft was put into operation. Since the beginning of the nineties, several launches have been carried out annually with the aim of putting into orbit certain compact and light vehicles. Until the fall of 2019, AKS Pegas performed 44 flights, of which only 5 ended in an accident or partial success. The launch cost ranges from $ 40 million to $ 56 million, depending on the type of rocket and other factors.

Since the end of the XNUMXs, the American company Virgin Galactic has been working on the AKC LauncherOne project. For a long time, development work and search for potential customers were carried out. In the second half of the tenth, the development company had problems, because of which the project schedule had to be revised.

The LauncherOne system is built around the rocket of the same name. This is a two-stage product with a length of more than 21 m and a weight of approx. 30 tons. The rocket is powered by N3 and N4 engines using kerosene and liquid oxygen. The total operating time of the engines is 540 sec. LauncherOne rocket can lift 230 kg of cargo into an orbit with an altitude of 500 km. A three-stage modification of the rocket with improved characteristics is being developed.

Initially, the launch vehicle was planned to be launched using a special White Knight Two aircraft, but in 2015 it was abandoned. The new carrier was a redesigned Boeing 747-400 passenger aircraft with its own name Cosmic Girl. The LauncherOne pylon is installed under the left side of the center section. 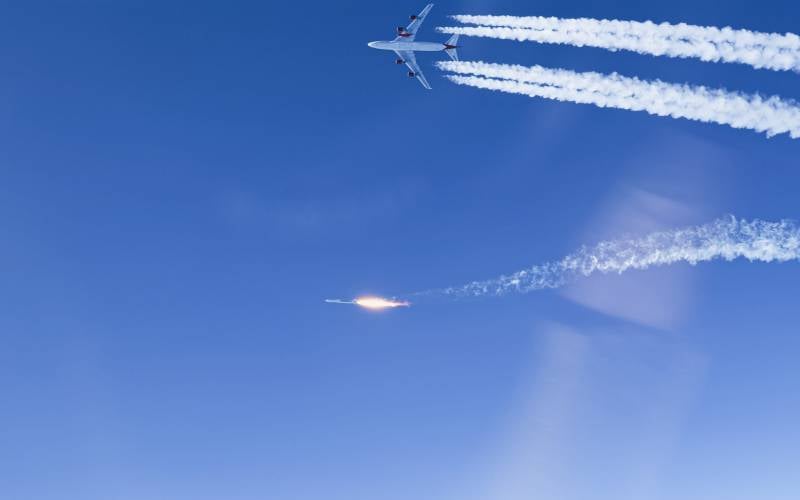 LauncherOne's first successful flight, January 17, 2021. Photo by Virgin Orbit
The development company claims that AKS LauncherOne can be operated at any suitable airfield. The rocket launch site is selected in accordance with the required orbital parameters. In terms of launch and flight principles, Virgin Galactic's development is no different from other air launch systems. The cost of such an operation is $ 12 million.

The first launch of LauncherOne took place on May 25, 2020. After uncoupling from the carrier, the rocket started the engine and began flying. Shortly thereafter, the first stage oxidizer line collapsed, causing the N3 engine to stall. The rocket fell into the ocean.

Virgin Orbit made its first successful launch on January 17, 2017. The modified rocket took off over the Pacific Ocean and sent 10 CubeSat satellites into low orbit. There are contracts for three more launches. Previously, there was an order from the communications company OneWeb, but these launches are postponed indefinitely or may be canceled.

New AKS air-launched projects are now being created in several countries. At the same time, the largest number of projects is proposed in the United States, where proactive developers can receive serious support from NASA. In other countries, the situation looks different - and so far has not led to noticeable success. 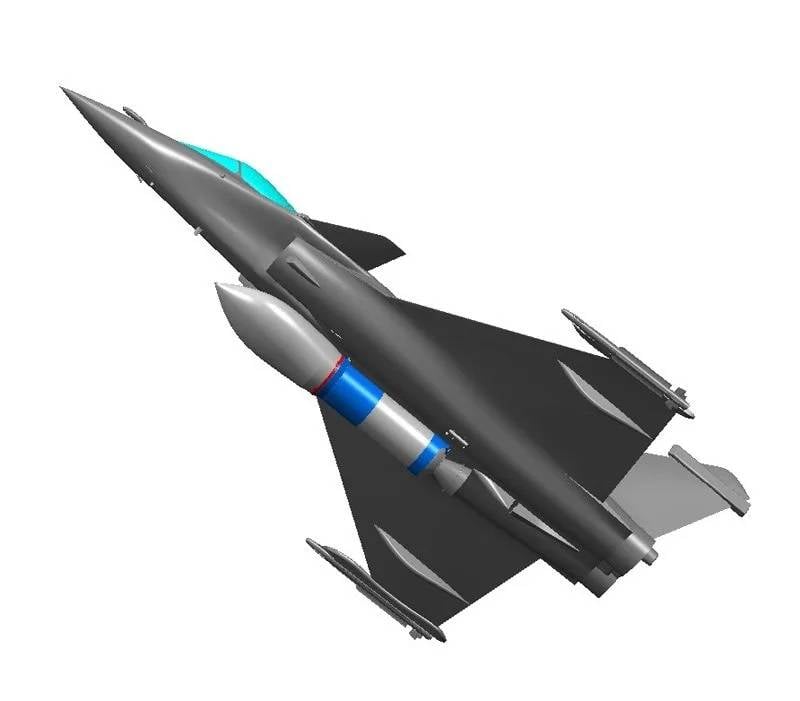 Rafale fighter with MLA missile. Dassault Aviation graphics
Since the end of the XNUMXs, France, represented by Dassault and Astrium, has been developing the AKS Aldebaran. Initially, several missile concepts with different launch methods were considered, and only MLA (Micro Launcher Airborne) received further development - a compact rocket with a load of tens of kilograms, suitable for use with the Rafale fighter.

The design of the Aldebaran MLA has been going on for several years, but testing has not yet begun. Moreover, both the timing of the tests and the very future of the project remain in question.

An interesting AKC concept was proposed by the American company Generation Orbit. Its GOLauncher-1 / X-60A project provides for the construction of a single-stage liquid-propellant rocket suitable for suspension under a Learjet 35 aircraft. It must develop hypersonic speed and perform suborbital flights. In the future, it is possible to obtain orbital capabilities. The X-60A is seen as a platform for a variety of research projects. 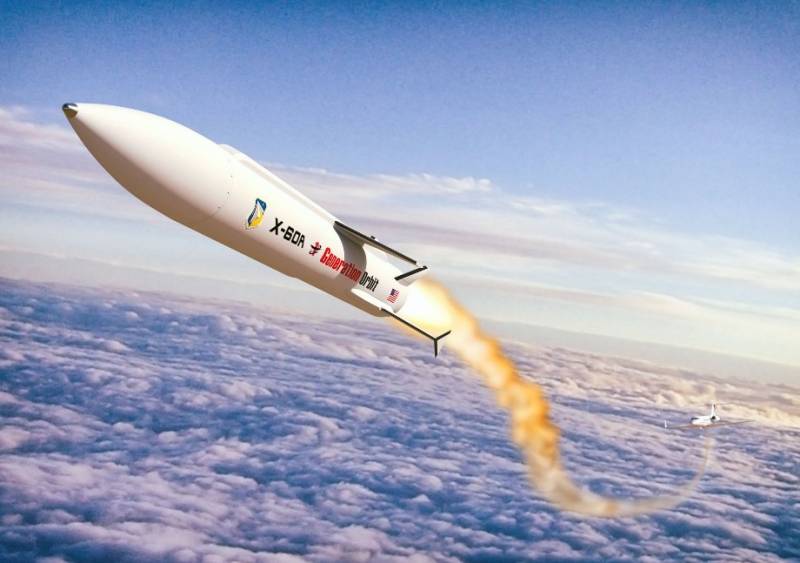 X-60A rocket launch. US Air Force / Generation Orbit graphics
At the beginning of the last decade, Generation Orbit received support from the Pentagon. In 2014, a prototype X-60A rocket made its first export flight under a standard carrier. Since then, there have been no reports of test flights. Probably, the military department and the contractor continue to develop, but so far they cannot begin full-fledged flight tests for one reason or another.

Several AKC projects of various kinds were developed in our country; their materials have been repeatedly shown at various exhibitions. For example, the MAKS project proposed the use of an An-225 aircraft and a spaceplane with an external fuel tank. The Air Launch project was also developed based on the An-124 aircraft. He was supposed to carry a drop container with a Polet missile. Both projects could not be completed for a number of reasons.

As you can see, over the past several decades, the concept of air launch for orbital flight has attracted attention, which leads to the regular appearance of new projects. At the same time, not all developments of this kind reach at least tests, not to mention full-fledged operation. To date, only AKS Pegasus has been able to bring it to regular flights, and soon LauncherOne may show such success.

Air Launch complex based on An-124. Graphics GRTs them. Makeeva
Such a failure of an air launch is associated with several objective limitations. The carrying capacity of such AKS does not yet exceed several hundred kilograms and is in direct proportion to the launch weight of the rocket, which, in turn, is determined in accordance with the characteristics of the carrier aircraft. Fuel economy due to air launch does not generally solve this problem.

However, air-launched systems have their advantages. They prove to be a convenient means of injecting small loads into low orbits. The lower payload allows you to collect the entire load faster and reduce customer waiting times. At the same time, it becomes possible to divide the relatively low launch cost into a larger number of customers. However, the developers and manufacturers of miniature space technology have not yet shown due interest in the existing AKS.

Foreign experience shows that aerospace systems with air launch have certain advantages over other rocket and space technology and can more effectively solve individual problems. It can be assumed that in the future this class of technology will not disappear and even develop. As a result, a new niche will finally be formed on the space launch market, which will be of interest to manufacturers of rocket technology and potential customers.