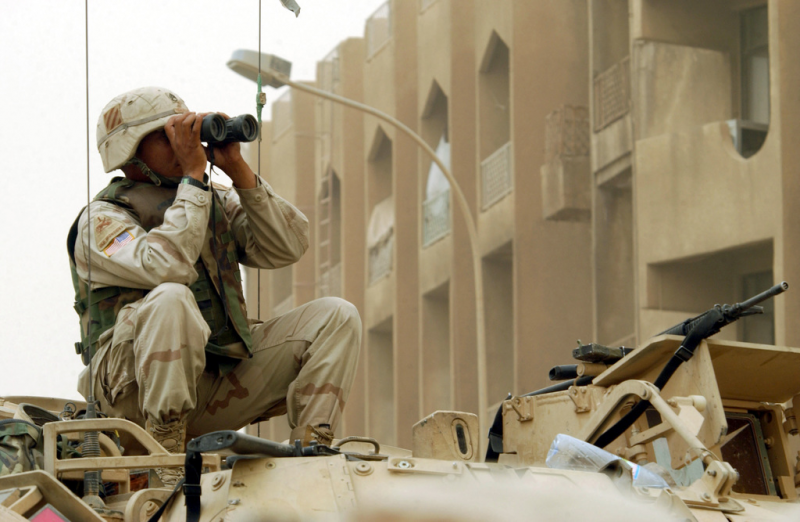 The US military seems to have begun to suspect something. In recent years, the great and invincible US army for some reason periodically gets in the face from the barbaric, poorly equipped and completely unmotivated armies of Russia and China.


Then some junk-class destroyer will drive away an American cruiser in the South China Sea from Chinese fishermen. Somewhere in Syria, a rattling Russian armored car will push off the road and disable the world's best American armored personnel carrier.

It's a shame to write about the miracles that happen to American technology during the flight of some ancient Russian plane. Wonderful American technology behaves more and more amazingly during such flights. Ships begin not to walk the seas, but to sail. An irresistible craving for independent flights awakens in planes. Like birds in spring or autumn. And they fly somewhere, completely oblivious to the pilots.

The American army is still fighting in WWII

I follow closely enough the publications in the American press related to the issues of military organizational development and the development of the American armed forces. A purely professional interest and a way to compare the understanding of the concept of modern wars in the headquarters of potential adversaries.

This time, I came across an article by an American military scientist, a retired submarine, a senior research fellow at the Hudson Institute, where he leads the Center for Defense Concepts and Technology and leads research for DARPA, OSD, the Navy and the defense industry, exploring ways to apply new technologies to solving military problems and conducting operations, Brian Clark.

Clarke, as a truly serious analyst, proceeds from a completely correct understanding of modern trends in the development of the army. In this he is not original. Exactly the same conclusions have long been drawn in the Chinese and Russian Armed Forces. Modern warfare will be very different from World War II in terms of the nature of the fighting. Armament and military equipment have reached such heights that it is no longer possible to talk about a long war to deplete resources.

"Organizational inertia and the desire to compete for dollars are forcing the US military to plan scenarios that favor their largest existing programs, even as America's adversaries shift to a completely different type of war."
A quite natural question arises, what does Clark mean when he speaks of a new type of war?

For the Russian reader, as well as for the Chinese, this is a rather urgent question. Simply because the armies of Russia and China did not conduct any serious military clashes that can be called successful operations of their own armed forces.

The answer is in the following quote:

"The recent successes of China and Russia in the gray zones in the East and South China Seas or in the Crimea could become the norm, and the US military could lose the battle by inches against patient competitors who are willing to play the long game."
Why did the victories of our armies become possible?

What is the strength of the Russians and the Chinese?

According to Clark, the US military is focused on solving global problems, including ensuring the defense of its own coast. While the opposing armies are developing combat plans aimed at destroying the most vulnerable systems of American forces.

What are the most vulnerable systems in the US Army today?

Alas, nothing new has appeared for many decades. I often remember one episode from the cult movie "Seventeen Moments of Spring". Dialogue between Stirlitz and the General of the Wehrmacht. Just the part that concerns the American army:

“You can expect anything from the Reds.

However, from the Americans too ... I've been at war with them for a year now.

These fools will be destroyed by their own technology, they think that the war can be won by bombing alone.

They will build up their technical power and drown in it.

She will decompose them like rust. They will decide that they can do anything. "
Clarke gives a more modern version that sounds about the same in meaning. New weapons, new technology, new possibilities, but the essence is old.

"Concepts such as the war to destroy the People's Liberation Army of China or the next generation of Russian military forces direct forces to electronically or physically suppress enemy information and communications sources, while simultaneously injecting false information that destroys the defenders' orientation and understanding."
Simply put, Brian Clarke explicitly urges the American military not to rely on technology, but to focus on more traditional ways of waging war. The enemy, that is, we and the Chinese, already possesses such systems for suppressing information channels, which make it possible to completely block the entire command and control scheme of troops in a special period almost instantly.

I recalled the results of face-to-face competitions between intelligence officers of the Russian and American armies, which were reported by the media. One of the results of these competitions was that suddenly it became clear: American soldiers know the equipment perfectly well, but they cannot fix it, they are fluent in all types of small arms, but they throw it away at the slightest malfunction weapon.

But most importantly, without modern electronic navigation systems on the ground, they become ordinary citizens in a dense forest. Such a terribly complex device as a compass is simply inaccessible to an American because of its “complexity”. They just don't study them. Why, if there are satellite guidance systems?

The Pentagon must change operational scenarios

Brian Clarke perfectly substantiated his vision of a future war. And urged the Pentagon to do the same. By the way, exactly the same discussions, precisely on this issue, are conducted periodically in our country. Including on the pages of VO. More on this below.

“Recognizing the Department of Defense's focus on high-intensity warfare, its potential adversaries are methodically developing strategies and systems that bypass and exploit the vulnerabilities of the US military, avoiding situations for which US forces are preparing.

The Department of Defense could fall into the trap of continuing to use a narrow set of high-intensity conflicts as its primary threats. ”
It was not in vain that I mentioned the discussions in the Russian military and paramilitary communities. How many copies were broken when discussing the use of nuclear weapons? When is it okay and when is it not allowed? How many conversations, literally up to this point, have been about the use of depleted uranium (uranium 238) munitions by the US army in Iraq in 1991 and in Yugoslavia (31 ammunition for 122 targets)?

The leading armies of the world today have ammunition capable of destroying almost any object to the ground. Sweep him off the face of the earth. But armies cannot use it in local conflicts simply because it can provoke a response from other "owners" of such weapons. And this is a direct path to the destruction of the Earth as a planet.

That is why, in Syria, we and the Americans so easily managed to agree on the delimitation of areas of responsibility. Moreover, the Russian and American military have direct communication channels in case of emergency. The Russian Federation and the United States practically do not touch each other, providing this opportunity to their allies from among the local population.

Today, the Pentagon continues to pursue approximately the same policy in military planning that was basic during the Cold War. To neutralize the powerful Russian army, an autonomous ground group in the form of a NATO bloc was created (even to fight the USSR). To resolve issues in other regions of the world, there are autonomous mobile grouping fleets. The power of these groups is based on the use of the most high-tech weapons.

The Americans completely ruled out the conduct of war on their own territory. Precisely because of the existence of the most powerful in the world fleet, aviation and modern missile weapons. Today, if you look closely at the US defense system, America is completely unprepared to oppose the enemy's ground army. We can even talk about the absence of any defense system acceptable for such a powerful state.

The beautiful scheme of owning the world, as it turned out, no longer works against serious armies. This is a system designed for countries that conditionally have an army. Even against Iran (although the Iranian army is not considered powerful enough), the Americans were afraid to act. The same история happened to North Korea as well. At the same time, the maintenance of autonomous groups requires huge costs. The kind that even the United States cannot afford.

In principle, Brian Clark's article was written precisely so that the Americans would understand that the cost of the army and navy is not the main thing in ensuring the security of the state. Moreover, the material is clearly anti-Biden in nature, since it denies the possibility of global control over the world without the forceful elimination of the armies of the two states opposing the United States.

We are accustomed to the fact that in the materials about our country, about our army there are pearls that, apart from a smile, do not cause anything in readers. Brian Clark's article is not one of those. This is a serious analysis of the situation in the US Army. These are proposals to change the very essence of this army. And that's why it's worth paying attention to it.

I have already written that the likelihood of the start of a military conflict today is extremely high. Relations between the countries are practically at zero. The existence of many states and peoples, especially in Europe, is under threat. We need to look for some way out of the crisis.

At the same time, it is necessary to understand the possible ways of modernization or some change in the army of a potential enemy. Know already in order to be ready to resist these changes.

Of course, what Clarke suggests to do quickly is impossible. Too clumsy and expensive structures were created by the Americans. It seems to me that it will take decades to implement the plan to modernize at least part of the American military structure.

But such modernization will definitely be carried out.

Ctrl Enter
Noticed oshЫbku Highlight text and press. Ctrl + Enter
We are
About Stalin and KhrushchevWhat you didn't want to know about England
Military Reviewin Yandex News
Military Reviewin Google News
93 comments
Information
Dear reader, to leave comments on the publication, you must sign in.