Unique tests of the S-70 "Okhotnik-B" UAV made the Pentagon and Whitehall nervous. The race of "unmanned wingmen" in full swing 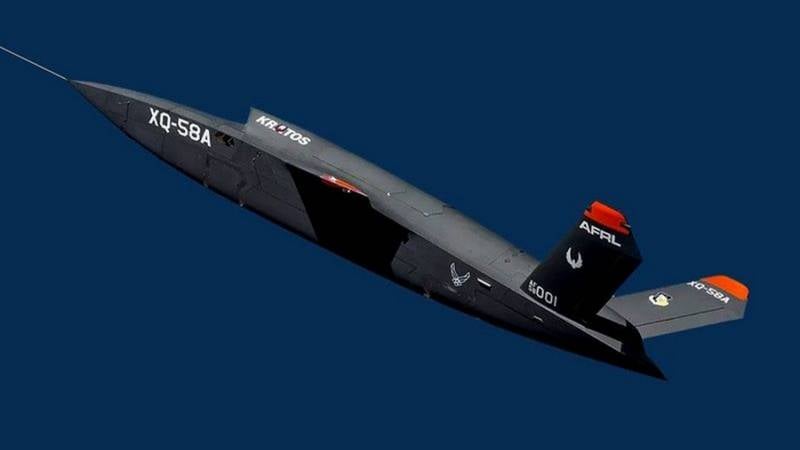 As the brief overview showed news sections of highly specialized domestic and Western military-political portals for January 2021, carried out at the end of November of the previous year, a unique full-scale test of the S-70 "Okhotnik-B" unobtrusive multipurpose attack and reconnaissance UAV caused great concern, both in the expert circles of the US defense department and the Agency Defense Advanced Research Projects Agency (DARPA), and in the competent communities of British Whitehall, marking the beginning of the so-called

"Unmanned wingmen race".
This is not surprising.

After all, we are talking no less than the successful development of virtual interception ("digital interception") of air targets of a simulated enemy by means of flight training modifications (UZR-73/74 and RVV-SD-UL without solid propellant rocket engines and warheads) of air- air "short and medium / long range R-73RMD-2 and RVV-SD on target designation from the 5th generation multifunctional fighter Su-57, involved in testing as the leading link of this operational-tactical" tandem "(air command post and third-party radar / radio-technical and optical-electronic reconnaissance means).

Advantages and disadvantages of Western "slave" UAVs, which should be taken into account by the specialists of PJSC "Company" Sukhoi "

Despite the presence of the tested prototype Okhotnik-B on the inner-fuselage suspension nodes throughout the entire testing period, the flight training simulators URVB R-73 / RVV-MD and RVV-SD provided the specialists of the Sukhoi Design Bureau and the Russian Aerospace Forces with spectrum of information, both about synchronization with the weapons control system of the S-70 "Okhotnik-B" UAV and further loading of the "tracking files" (including coordinates) of the imaginary enemy objects detected by the Su-57 radar into the inertial navigation systems of the simulators, and about the transfer rate data of "support files" by means of an improved secure radio channel for data exchange of the K-DLI standard, used by the C-111 network-centric communication complex of the Su-57 fighter and a similar communication complex "Okhotnik-B".

This opportunity was provided by equipping the URVB simulators with a standard element base of avionics, identical to the electronic "stuffing" of the combat versions of the R-73/74 and R-77-1 air combat missiles (including the inertial navigation unit, as well as the active radar seeker 9B-1103M- 200PS / PA and an improved infrared seeker type MK-80 "Mayak").

It was this test that pushed the specialists of Kratos Unmanned Aerial Systems and Boeing (in cooperation with DARPA and AFRL laboratories) to intensify the ambitious Low Coast Atritable Strike Demonstrator and Loyal Wingman Advanced Development programs, which provide for the development of promising subtle “ slave "XQ-58A" Valkyrie "UAVs for integration into the F-35A / B / C and F-22A squadrons of the Air Force, ILC and the US Navy, as well as" slave "UAVs similar in aerodynamic layout and a number of parameters (except for the configuration of air intakes) Loyal Wingman for the Royal Australian Air Force combatant.

The British Defense Department did not miss the opportunity to join the club of states-operators of "unmanned slaves".

For example, according to competent sources in London, Whitehall provided the Northern Irish Spirit Aero Systems with a $ 30 million appropriation for the implementation of the program to develop its own slave drone for gaining air superiority, Lightweight Affordable Novel Combat Aircraft (LANCA).

The aircraft will be able to function both in a network-centric connection with the 5th generation F-35A / B "Lightning-II" fighters entering the Royal Air Force and the British Navy, and in tandem with the promising stealth fighters "Tempest" from the British concern "BAE Systems" ...

Based on the demonstration sketch of the British version of the Faithful Wingman for the first time published by the headquarters of Spirit Aero Systems, we can conclude that the layout of the drone will be as close as possible to that of the XQ-58A "Valkyrie", and will be represented by an overhead air intake, swept wing and nozzle "cuff" of the "beaver tail" type. (The latter design feature was first seen in the American stealthy strategic air-launched missile AGM-129A ACM).

As for the tactical-technical and operational-tactical advantages of the tandems "F-35A / B / C, F-22A - XQ-58A" and "LANCA - F-35A / B," Tempest "," Typhoon "in comparison with the domestic tandem "Su-57 - S-70" Okhotnik-B ", then here we can talk, first of all, about the use of not only standard terminals for the exchange of tactical information of the" Link-16 "type with omnidirectional antennas of the decimeter L-wave band (c frequency 0,96-1,215 GHz), but also promising network-centric terminals MADL and IFDL, integrated into the VCS of multifunctional stealth fighters F-35A / B / C and F-22A "Raptor" and to be placed on UAVs of the "Loyal Wingman" family.

For the operation of these highly secure tactical information exchange channels, an aperture of several (distributed over the fuselage of a fighter / UAV) directional antennas with low-power microwave transistors of the centimeter Ku-band (with a frequency of 1-18 GHz), having a beam width of about 1 degree and a minimum level side petals.

As a result, it will be very difficult to suppress such narrowly targeted channels of exchange of tactical information at a distance of more than 50 km, both by means of ground complexes of powerful noise interference SPN-2/4 (they function on target designation from the complexes of the executive RTR 1L222M "Avtobaza-M"), and by more high-energy complexes of electronic warfare "Krasukha-4".

Secondly, it is noticeably smaller (than that of Okhotnik-B) maximum fuselage midsection areas and the presence of more pronounced angular and inclined segments of the XQ-58A and Loyal Wingman gliders, contributing to a greater reduction in the radar signature of western slave UAVs.

And finally, thirdly, it is the ability of the "nozzle cuff" of the "beaver tail" type to significantly reduce the infrared signature of western "slave" drones, reducing the range of their detection by means of the domestic quantum optical-electronic sighting and navigation systems OLS-35 / 50M of Su-35S fighters and Su-57.

Meanwhile, the noticeably smaller volume of the fuel system and the wing area of ​​the western "slave" UAVs provide the latter with a range of about 1800-1850 km (compared to 3000 km for Okhotnik-B) and a practical ceiling of no more than 11500-13500 m, partially limiting the effective the range of the AIM-120C-7 / D air combat missiles due to the effect of greater aerodynamic braking on the ascending branch of the trajectory than that of our RVV-SD missiles (in the future “Product 180”) launched by Okhotniki-B from an altitude range of 17000 - 18000 m.

The use of long-range missiles of the MBDA "Meteor" / JNAAM family with integral / combined rocket-ramjet engines (providing prolongation of the burnout of a powdery solid propellant charge) partially neutralizes this lag.

Ctrl Enter
Noticed oshЫbku Highlight text and press. Ctrl + Enter
We are
The RF’s response to equipping the Lancers with AGM-183A missiles was not long in coming. Pennant and Dry in the gameSituational analysis of the death of the MH17 flight (Malaysian Boeing 777), made on the basis of engineering analysis from 15.08.2014
Military Reviewin Yandex News
Military Reviewin Google News
51 comment
Information
Dear reader, to leave comments on the publication, you must sign in.