Large wheels for the army: a tool for conquering transcendental off-road 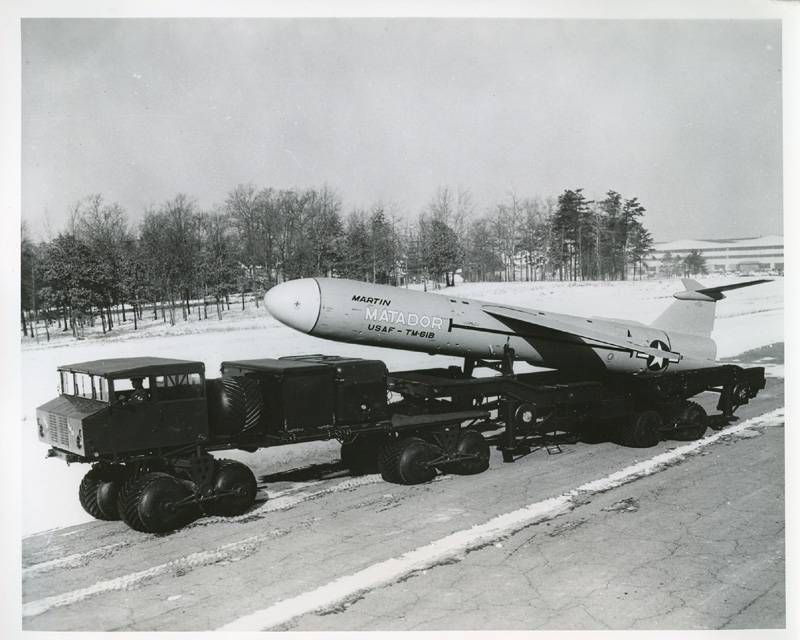 Ultra-low pressure tires or pneumatic rollers are a real godsend for overcoming difficult road conditions. More precisely, not even road conditions, but directions over rough terrain. The most important advantage of huge tires is the low specific ground pressure (0,2 - 0,7 kgf / cm2) and, consequently, a sparing effect on the fragile soil layer of the tundra. Such machines do not bury themselves up to their ears in the snow and do not go into the depths of a swamp bog. Actually, that's why this technique is called snow and swamp-going vehicles. If the vehicle is equipped with standard systems of centralized tire inflation, the support cross-country ability increases multiple. Only equipment with non-traditional propellers - hovercraft or auger-rotor all-terrain vehicles - can argue with snow and swamp-going vehicles. The snow and swamp-going vehicle on flat tires literally hugs rather big obstacles with tires - stumps, logs and boulders. This is achieved, in addition to low pressure (0,2 - 1,0 kgf / cm2), due to the small landing diameter of the pneumatic roller, thin frame and large profile width. The prototypes of ultra-low pressure tires - arch tires behave in a similar way. They became especially popular in the second half of the last century. For example, the cross-country ability of the two-axle ZIL-164 with arched tires on the rear axle became equal to the cross-country ability of the three-axle ZIL-151. 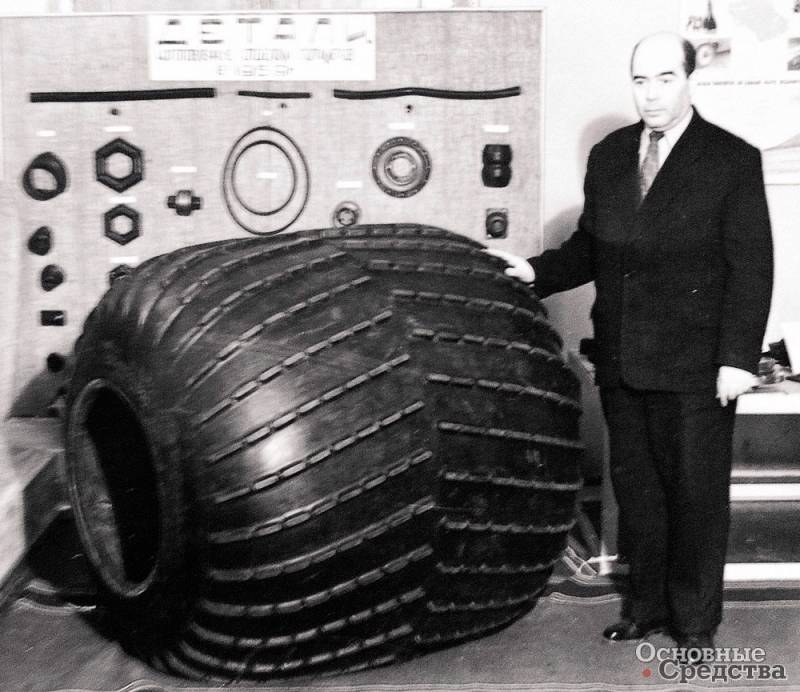 Pneumatic roller experienced ET-8. Source: os1.ru
The presence of huge wheels on the vehicle also causes a large displacement. In other words, cars on ultra-low pressure tires are often able to float - the wheels play the role of floats. By the way, tires on the water, due to their large diameter and developed lugs, do a good job with the role of propellers. On average, they allow you to accelerate on water up to 3 km / h; for high speeds, water cannons or propellers are already required. 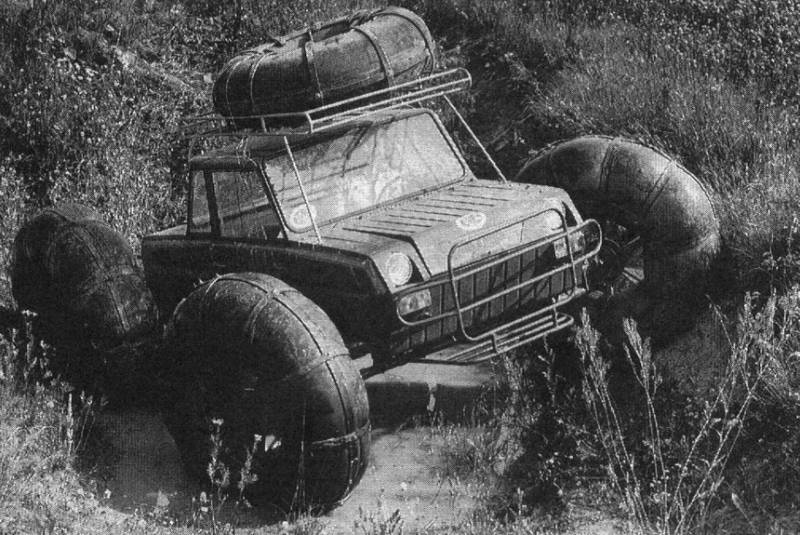 In the 90s, one could find such semi-handicraft copies of snow and swamp-going vehicles. The picture shows the transport of Nara. Source: autoreview.ru
The positive aspects of ultra-low pressure tires do not end there. The large wheel diameter naturally significantly increases the ground clearance - in some modern cars it can exceed 750 mm. Thanks to soft tires with a large profile, engineers in some cases do without a suspension on snow and swamp vehicles. Of course, at high speeds and in off-road conditions, the lack of shock absorbers can turn into a dangerous goat, but such a technique is not intended for rally-raids. Even on hard surfaces, the maximum speed does not exceed 70 km / h.

The most interesting thing is that due to the low pressure inside the tire, the air in the event of a puncture does not poison especially intensively, and this is easily compensated by the inflation system. A very good bonus for military vehicles. It is not for nothing that army drivers were among the first to try "super-rogues" on soft tires.

In theory, it is not difficult to create a car on pneumatic rollers. For this, a motorcycle or passenger car is enough, in which standard wheels are replaced with used cameras from trucks, planes and tractors. The result is a kind of off-road vehicles, popularly called funny nicknames - caracats, tundrolets, dutik, etc. like a tire. 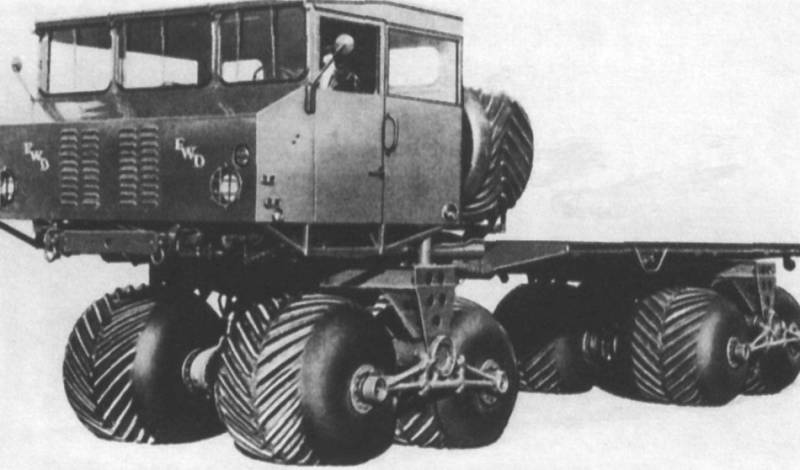 FWD Terracruzer MM1. Source: 3w.su
On the industrial level, one of the first to use ultra-low pressure tires on its products was the automobile company FWD from the USA. In 1955, the company's engineers built an experienced XM357 Terracruzer conveyor with eight Goodyear pneumatic rollers with an internal pressure of 0,2 - 0,35 kgf / cm2... The transfer of torque and vertical load was carried out using rolls. A distinctive feature of the car was the actual lack of ground clearance - hefty pneumatic rollers took up almost the entire width of the truck. The total mass of the truck was 19 tons, of which nine were assigned to the payload. Originally developed for the needs of the US Army, an experienced all-terrain vehicle was sent for testing at the main duty station - in Greenland. In the harsh conditions of the Far North, the experimental car did not behave in the best way and constantly annoyed with excessive tire wear. In addition, the transmission of torque through the rolls showed severe power losses and, as a result, low efficiency. As a result, the engineers decided to go the traditional way - to transmit power to the propeller through the axle. The new Terracruzer MM-1 was also equipped with eight wheels with slightly narrower Rolligon tires, grouped into two bogies. 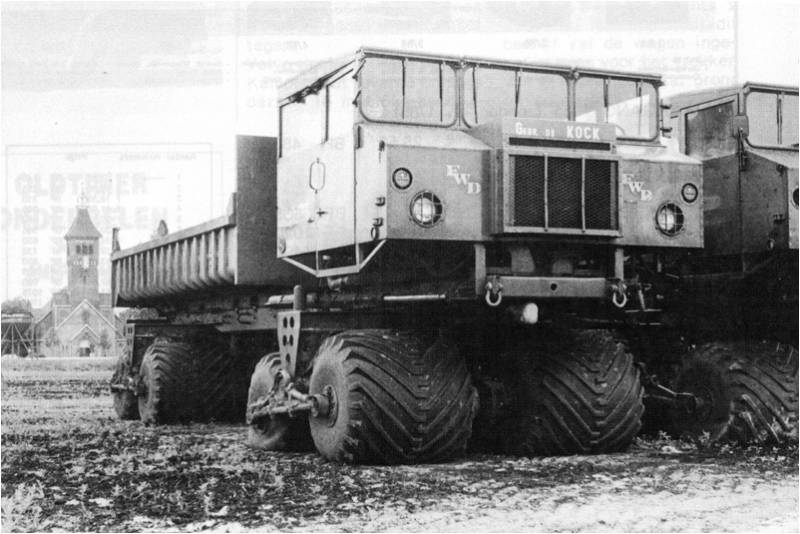 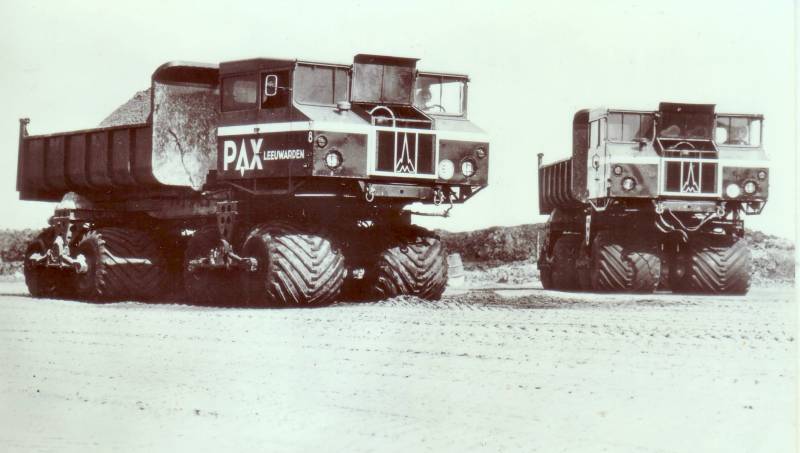 Civilian variations on the FWD Terracruzer theme. Source: 3w.su
The four-wheel drive truck was assigned its main purpose - to carry American missiles on itself over difficult terrain. For this purpose, an air-cooled Continental eight-cylinder engine running on aviation gasoline with an octane rating of 145, and a 4-stage torque converter served. The off-road vehicle-snow and swamp-going vehicle had an adjustable suspension, which allows to overcome uplifts of 60%, and a centralized wheel inflation system with an adjustment range of 0,35 - 0,9 kgf / cm2... The giant's top speed reached 64 km / h. A symmetrical locking differential was installed between the bogies in the transmission, and the drive to the wheels was carried out using helical gears located inside the hollow balancers. The tractor was maneuvered by turning the front bogie using a hydraulic booster. The brakes were of the aircraft type with hydraulic actuator. 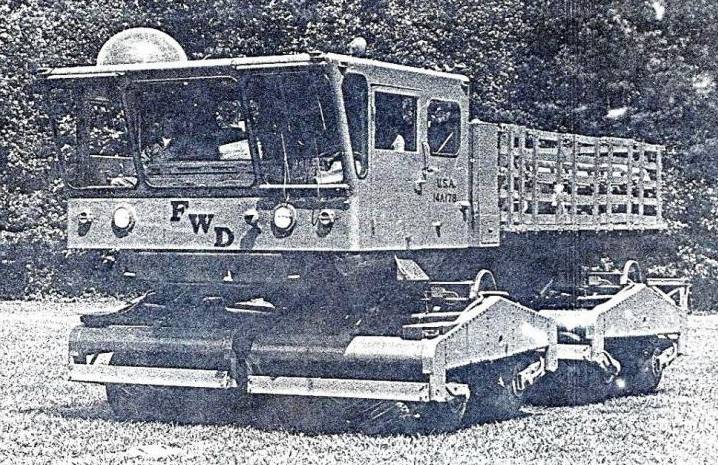 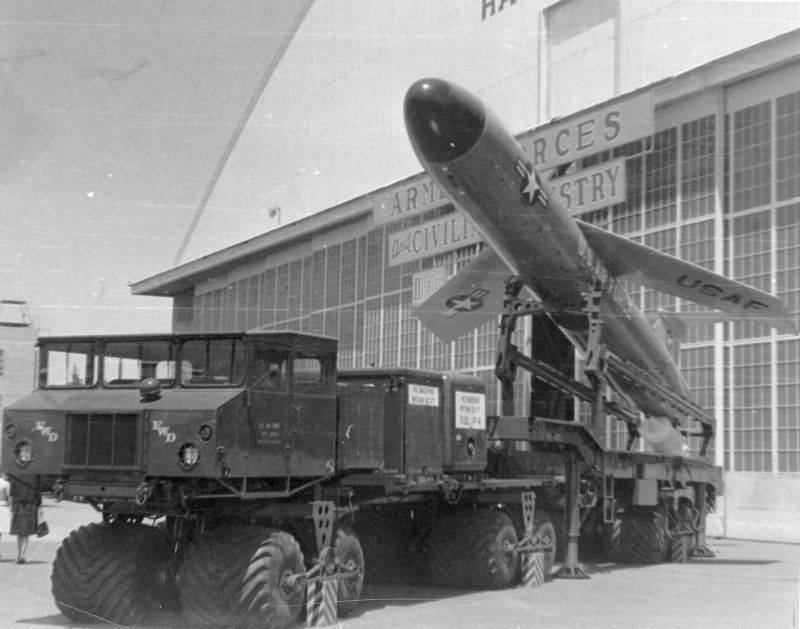 FWD Terracruzer MM1. Source: pinteres.com
In the future, the Americans built for the military, as well as for geologists, agricultural workers and builders, many super-passable pneumatic equipment. Probably the most curious unit was the FWD trailer, equipped with four pneumatic rollers with a diameter of 1625 mm and a width of 1070 mm. In these tires, engineers proposed to transport 1900 liters of liquid cargo - fuel, oils and other technical fluids. In addition, the trailer had a platform with a carrying capacity of 2,72 tons.

The Soviet Union, possessing endless expanses, completely devoid of a roadbed, also found itself among the pioneers of snow and swamp transport. The leading developer was the specialized institute NAMI, which in 1958 built an experienced NAMI-044e with a 4x4 wheel arrangement. Initially, arched tires were installed on a small truck resembling a tractor, and in 1959, wide pneumatic rollers with a pressure control system appeared. 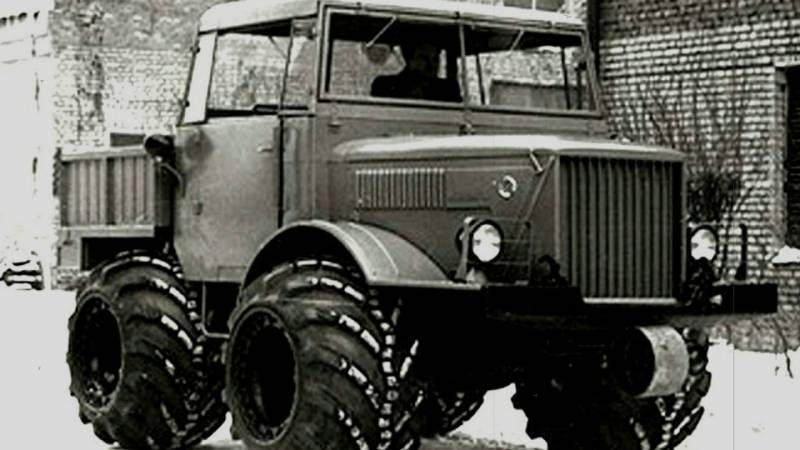 US-044e. An early prototype still had arched tires. Source: youtube.com
Obviously, under the impression of the overseas Terracruzer MM-1, NAMI created an ET-8 all-terrain vehicle of the 1961 model, very similar to it. The prototype had an inter-carriage and two inter-bead differentials, as well as a drive gear guitar in a hollow balance bar. The ET-8 did not have a suspension as such. The front bogie was turned by a hydraulic booster from MAZ-525, installed on a running device. ET-8 was developed with a carrying capacity of 8 tons, and the specific pressure on the ground was 0,4 - 0,9 kg / cm, which is comparable to tracked propellers. Each I-245 wheel provided contact with the ground with an area of ​​about one square meter. An experienced 8x8 truck was equipped with a tire pressure regulation system. 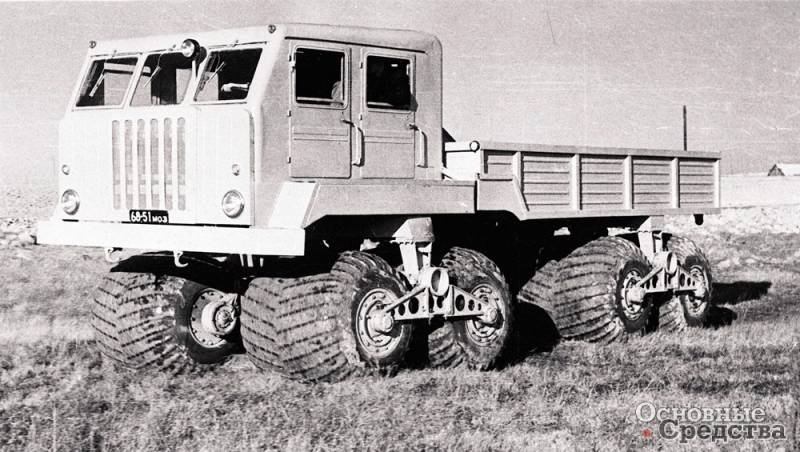 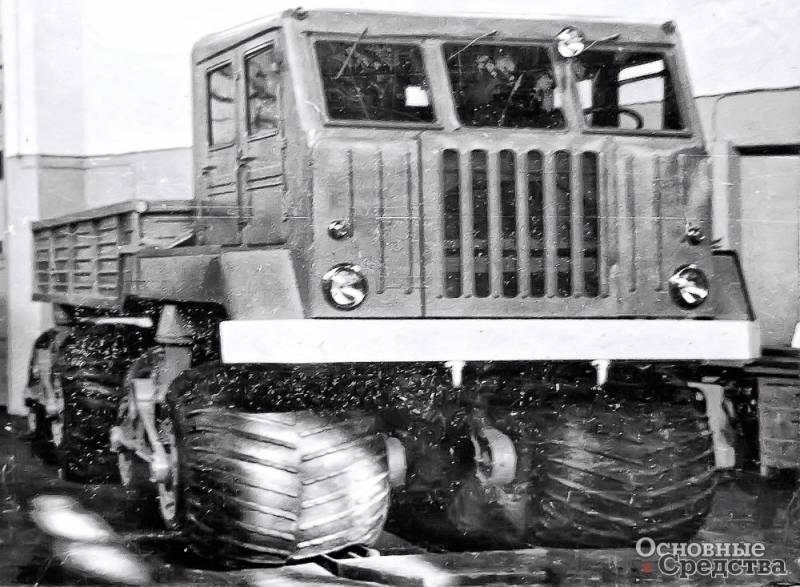 ET-8. Source: os1.ru
To reduce the cost of production of the machine, some units were borrowed from serial equipment. So, the cabin came from an average artillery tractor ATS, and the engine was taken from a carburetor ZIL-375 with a capacity of 180 hp. from. - later it will appear on Ural cars. Tests ET-8 showed that the SUV copes well with sticky soils, swampy meadows and swamps, while maintaining traction on the hook up to 9 tons! For the 50-60s, no wheeled vehicle could boast of such cross-country ability - the ET-8 could only be compared with tracked vehicles. At the same time, the resource of the caterpillar propeller did not exceed 4-7 thousand kilometers, while pneumatic rollers could work even 30 thousand.

Despite the obvious advantages, the experienced snow and swamp vehicle from NAMI did not interest the military, although in the West such FWD vehicles became the founders of a whole family.