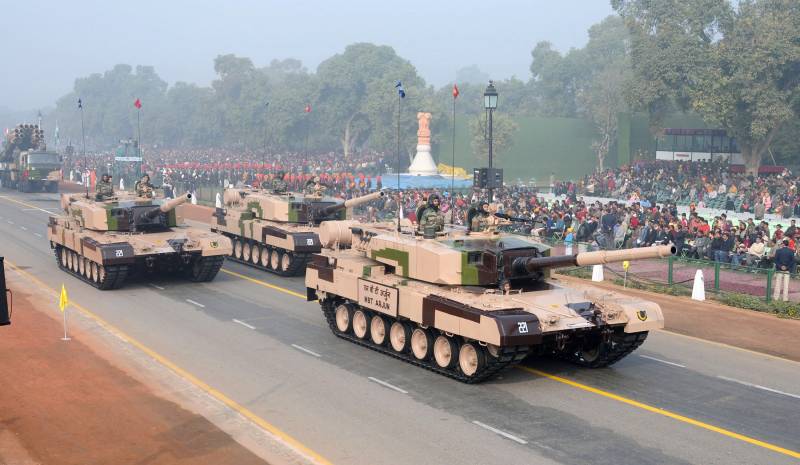 In the mid-nineties, Indian industry completed the development of its first own main battle tank, the Arjun. A few years later, this car was brought to mass production and service in the army. The development of the project continued, and now the army is preparing to master the tanks of the new modification Arjun Mk 1A.

From project to army

Research work on a promising Indian tank began in the seventies. The completion of the design of the MBT "Arjun" was officially announced in the early nineties. At the same time, the army issued an order for pre-production tanks of the new model. By the end of the decade, a full-scale serial production contract appeared. The production of new MBTs was entrusted to the Heavy Vehicles Factory in Avadi (Tamil Nadu).

Back in the mid-nineties, the 43rd Tank Regiment, at that time armed with outdated T-55s, received six Arjun pre-production tanks. The deliveries of serial armored vehicles began only in the two thousandth. So, in 2004, it was reported about the transfer of the first serial batch of 16 Arjun Mk 1 tanks to the regiment. The rearmament processes dragged on until 2009, when the number of new equipment was brought to the standard 45 units. At the same time, the regiment completely got rid of outdated equipment. 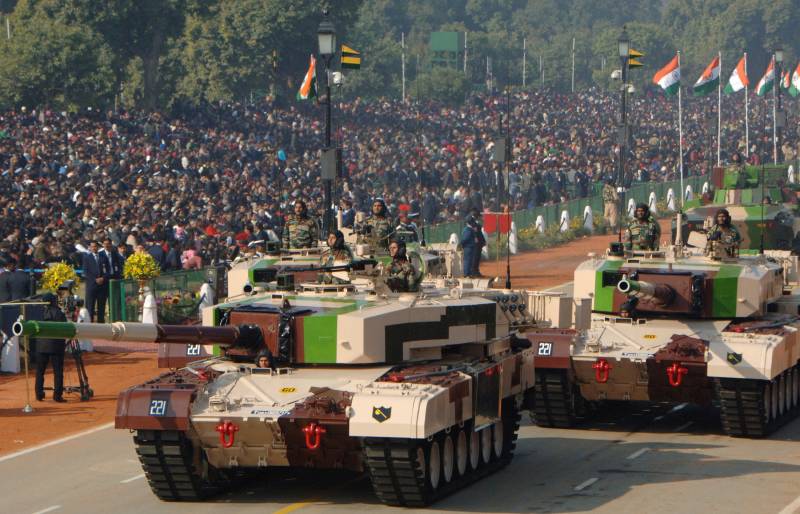 75th Tank Regiment at the parade on January 26, 2013
After a break, in 2011, deliveries of Arjun tanks to the 75th Tank Regiment began. The process of its rearmament took several more years and ended in the mid-tenths. Having previously gained the necessary experience, the industry was able to speed up production and faster fulfill existing orders.

For a number of reasons, the Indian army decided to transfer only two regiments to the Arjun tanks of the first model. 124 units were built for them. technology. Until recently, this was the entire MBT fleet of its own Indian design, but in the future, an increase in quantitative and qualitative indicators is expected.

At the end of the 2s, against the background of mass production, the development of an improved Arjun Mk 2012 tank began. About a hundred modifications and improvements were proposed, affecting all the main characteristics and capabilities. In 14-XNUMX. experimental machines of the new modification have been tested and, in general, have confirmed the calculated parameters.

However, the army was in no hurry to order the upgraded tank. For all its advantages, "Arjun" of the second version did not fully meet the technical and economic requirements. The result of this was an order for the revision of the project in the direction of lightening the design and reducing the cost of production. In 2018, this version of the Arjun Mk 2 project received its own designation Arjun Mk 1A. 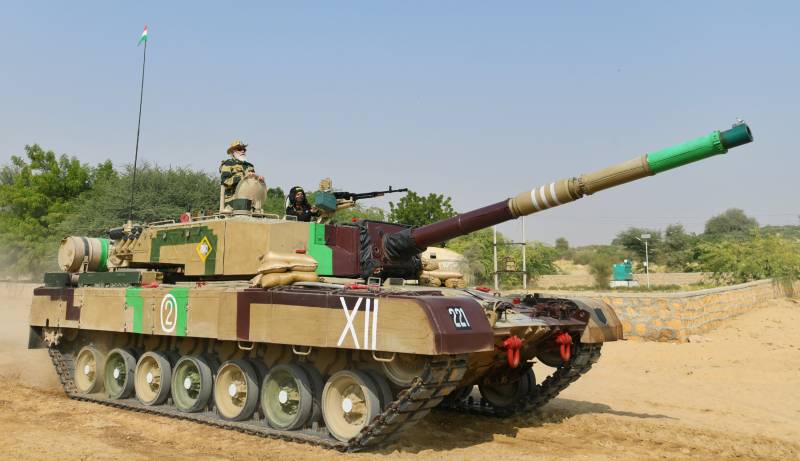 Indian Prime Minister Narendra Modi in the Arjun tank of the 75th Regiment, November 14, 2020
In 2020, the army completed tests of the Arjun MBT of the latest version of the Mk 1A and recommended it for the series. A few days ago, Indian media reported the approval of a new contract for the production of tanks. It provides for the construction of 118 tanks. They should be made and delivered to the army within the next 4-5 years. The cost of this technique is Rs 8400 crores (Rs 84 billion or US $ 1,16 billion).

It is curious that the assembly of the first car began last year and has already been successfully completed. The first serial Arjun Mk 1A was handed over to the customer on February 14 during a ceremony with the participation of the country's top leadership. Already this year, the transfer of a whole batch of tanks of the new modification is possible.

To date, the Indian army has ordered, received and mastered 124 main battle tanks "Arjun" basic modification Mk 1. This technique was distributed between two tank regiments. An order has also been placed for 118 newer Arjun Mk 1A, and the first vehicle of this contract has already been received. Apparently, with the help of this contract, two more regiments of the ground forces will be re-equipped.

SAMHO guided missile tests, September 2020
Thus, if the production program does not face any difficulties, by the middle of the decade India will have 242 MBTs of its own design and local production. With the help of this technique, no more than 4-5 tank regiments will be rearmed.

In this context, it should be recalled that the Indian Army has over 60 tank regiments, each of which has dozens of tanks. According to open data, there are more than 2400 T-72M1 MBTs and over 1000 T-90Ss of foreign and local assembly in service. At least 1100 more tanks are in storage.

Thus, the successful fulfillment of new orders for the production of the modernized MBT "Arjun" will not have a significant impact on the quantitative and qualitative indicators of the Indian tank forces. The share of self-developed equipment will not exceed 7-8 percent, as a result of which the fighting qualities of the army will continue to be determined by Soviet and Russian armored vehicles.

The 43rd and 75th Tank Regiments, equipped with the Arjun MBT, are stationed near the Indian-Pakistani border. In the event of aggravation of relations between the two countries or the beginning of an open conflict, they will have to solve certain tasks, up to the conduct of hostilities. 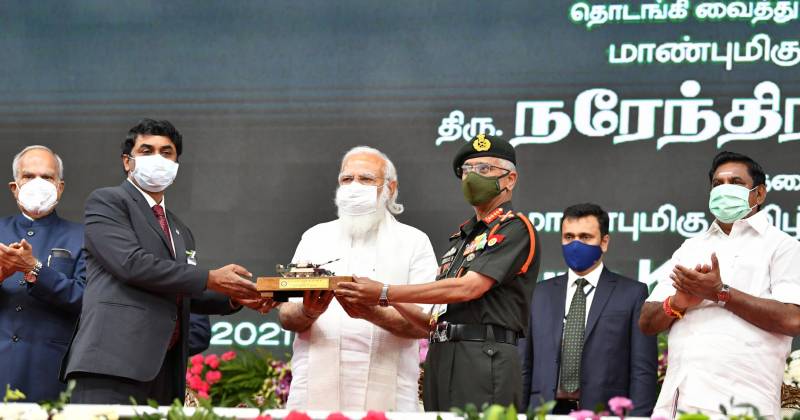 Acceptance ceremony of the first Arjun Mk 1A tank, February 14, 2021
The Pakistani army has 2 armored divisions and 7 separate tank brigades. These formations are quite large in size and have a large fleet of armored vehicles. The total number of tanks in the Pakistani army exceeds 2400 units, not counting equipment in storage.

The ranks have medium and main tanks of seven types of different origins. The most massive is the MBT "Al-Zarrar" joint Pakistani-Chinese development - at least 500 units; a park of up to 700 units is reported. The production of Al-Khalid tanks continues, also organized together with China. Such machines were built in an amount of at least 300 units. More than 300 Soviet-made T-80UD tanks were purchased from Ukraine. Also, several hundred outdated medium tanks received from China remain in service.

It is easy to see that the Indian Arjun tanks have a certain qualitative superiority over the outdated Pakistani armored vehicles. The new modification of the Arjun Mk 1A in the future should show advantages over other equipment of a potential enemy. However, the real potential of Indian tanks of their own design is seriously limited by their number. As a consequence, the influence of such a technique on the course of hypothetical combat operations may be minimal.

Over the past few decades, India has been trying to develop its defense industry and create its own weapons and equipment to reduce its dependence on imports. Work in this direction is progressing with limited success, but the main challenge is unlikely to be achieved in the foreseeable future. 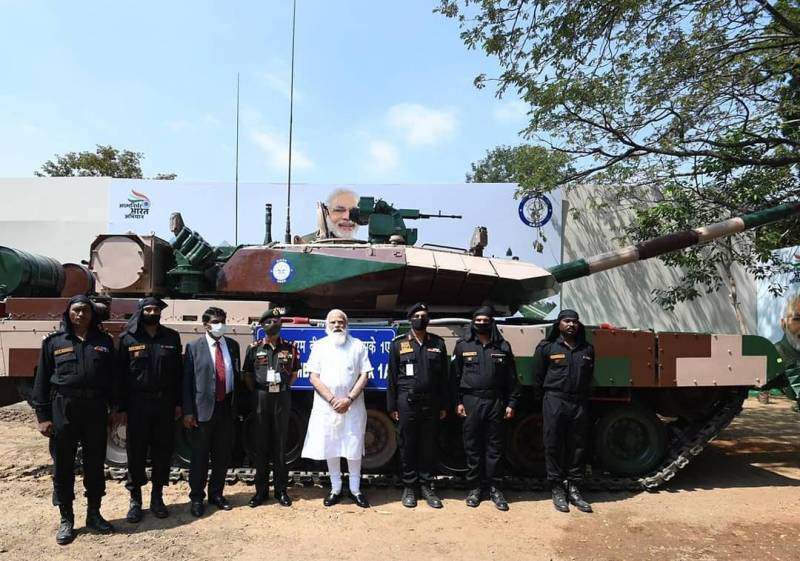 The newest tank, its crew and the country's leadership
Having spent a lot of time and resources, India was able to create its own main tank, generally meeting the requirements of its time. However, despite all the efforts and costs, it was not possible to build it in a large series. The Arjuna modernization project gave the desired results of a technical nature, but the series will again be limited and will not have a noticeable effect on the state of the tank fleet.

However, even such results of work become a reason for pride. At the moment, only a few countries in the world can develop and build MBT, and India is now one of them. Similar projects are being implemented in other areas, including combat Aviation and military shipbuilding.

Not so long ago it became known that the serial Arjun Mk 1A of the new order will be the last in its family. The production of such equipment is not planned to continue. In the future, the industry will have to develop and master a completely new tank. What it will be and, more importantly, what series it will be able to build is unknown. However, it is obvious that armored vehicles of Soviet and Russian design will continue to form the basis of Indian tank forces for a long time to come. There are no prerequisites for changing this situation yet.