Afghanistan will be the arena of struggle again 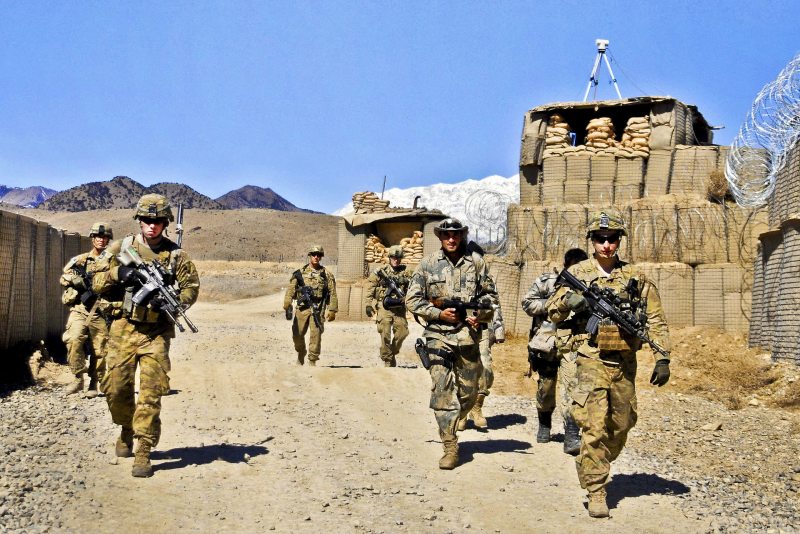 
For a fairly large number of Russians, this word began to mean not only the name of the citizens of a certain country, but also the soldiers and officers who, by the will of fate, were thrown into the heat of war from the well-fed peaceful life of the Soviet Union. Yesterday we celebrated another anniversary of the withdrawal of troops from this country. We marked the end of the meat grinder, in which the destinies of a whole generation of Soviet people were broken.

But there is another country, which also has its own Afghans. Precisely in the Soviet sense of the word. These are American soldiers who are still fighting one of the longest wars the United States has ever fought. The very limited contingent of the American army, which, although it does not conduct active hostilities, periodically participates in clashes with the mujahideen.

The attitude to this war in the United States itself today is about the same as in the 80s of the last century in the USSR. Most Americans are demanding that this war be ended at last. They demand to return the American soldiers home. They demand not to endanger the lives of Americans.

Perhaps, after reading this absurd sentence, the readers had a feeling of some confusion.

How can one simultaneously withdraw and leave the military in a foreign country?

But this is really possible. You can withdraw combat units, but in their place, leave support, intelligence, anti-terrorist units and military police.

The fact that the war in Afghanistan "did not work out" for the United States was already clear to Barack Obama. Many have already forgotten that it was Obama who began to withdraw units from the most dangerous provinces. Without much publicity, without fanfare, but the contingent then began to decline.

The new US President Donald Trump also understood this fact. And he also wanted to end this war. But Trump's motivation was completely different. If Obama believed that the war was futile. And it's just stupid to spend budget money.

Then Donald Trump clearly followed his line of strengthening the state from within. Let me remind you the algorithm of actions of the American president, which is incomprehensible to many even today.

In 2018, the first reports of American contacts with the Taliban leadership appeared (the organization is banned in the Russian Federation). Moreover, these contacts were at the highest level. I repeat, not with field commanders, but with leadership. In Qatar (more precisely, in its capital Doha), the movement's official office is located. It was there that American diplomats were spotted.

This message was quite explosive. Communication at the level of representatives of intelligence and diplomatic corps with the enemy is nonsense even for Americans. In the circles of the American intelligence community, this was perceived as a betrayal of the country.

Threats began to threaten Trump. But, be that as it may, it was in 2018 that negotiations began between the United States and the Taliban (the organization is banned in the Russian Federation).

It cannot be said that Donald Trump turned out to be a "reinforced concrete" president. The threats did their job. In 2019, Trump nevertheless announced the termination of negotiations.

But the situation has changed in Afghanistan itself. Therefore, after some time, negotiations were resumed. Again, without fanfare and fanfare.

The Taliban agreed to control and suppress the activities of Al-Qaeda on their own (banned in the Russian Federation). This was the main condition of the Americans. They do not actually control most of the territory of Afghanistan.

In response, the Americans are withdrawing some of their troops, reducing the number to 8,6 thousand people, transferring part of their military bases to the Taliban, lifting their own sanctions against the Taliban leadership (an organization banned in the Russian Federation) and promoting the lifting of international sanctions.

In principle, the signed agreement is very similar to the Minsk agreements between Ukraine and CADLO. In fact, the Americans signed a surrender. At the same time, they tried to save face. It seems to me that this was the only correct decision in that situation. But it was that "landmine" that was laid under the entire policy in Afghanistan and which was to explode in the event of a change in the political leadership in the United States.

It may sound strange, but Biden is also for the withdrawal of troops from Afghanistan.

Moreover, this is not today's decision, this is a position voiced back in 2018 and confirmed in 2019. Let me remind you of Biden's words at the Council on Foreign Relations (CFR) hearing in July 2019:

"If any US military presence will remain, it will only be for the purpose of conducting counter-terrorism operations."
"In addition, it will be important to diligently engage Afghanistan's closest neighbors, including Pakistan, Iran, China, India and Russia - they all have an interest in Afghanistan and need to convince them to support a lasting peace deal."
That is, Biden has an understanding that the war is a losing one for the United States.

But the point is (unlike Trump) President Biden is not a specific person. This is the collective Biden. Team Biden, if you will. And now the opinion of one person is not so important. And the opinion of the team is important.

Moreover, we forget another important factor. In addition to the Americans, there are other units of the armies of the NATO states in Afghanistan. For example, Germany. And these states are also planning some actions on the territory of Afghanistan. That is why today the North Atlantic Alliance will discuss at the level of defense ministers the further actions of the bloc in Afghanistan.

Among other things, one of the issues will be the withdrawal of troops.

The Taliban signed the agreement for a reason. The withdrawal of troops refers not only to the American army, but also to its allies. The mandate of the allies, in particular the FRG, expires on March 31. This is the deadline after which something must happen.

The revision of the agreement, which means the next negotiations with the Taliban (the organization is banned in the Russian Federation) is a long-term business. It is highly doubtful that they will end by this time.

Will the Germans withdraw their troops (1200 people today) or will they leave?

What will the Taliban do if this contingent remains?

What will al-Qaeda do (banned in the Russian Federation)?

Without the support of the Taliban, the alliance cannot control the terrorists.

In any case, the decision will be up to the Americans. Europeans are well aware that they are zero without the United States. And they will not be able to act independently in Afghanistan. The Taliban (if desired) will destroy the same Bundeswehr in a short time. That is why NATO defense ministers will urge the Americans to maintain at least a limited presence in Afghanistan.

It seems to me that Biden (the same collective Biden) will somehow try to change the agreement or cancel it. Strictly in accordance with the country's declared course towards US dominance in the world. And this is possible only if the current state of affairs in Kabul is preserved.

Geopolitics is to blame

I propose to slightly change the point of view on the problem of Afghanistan. Look at the situation more globally. Based on the main task of the United States during the reign of Joe Biden - the return of a unipolar world, led by America.

Let me remind you of the situation in dotted lines.

So, in the Asian region today the interests of all three global players converged. Russia and China are just in this region. And the US is very interested in minerals and trade routes that provide real profits without too much trouble. The Americans cannot resist China and Russia on land. Therefore, they are courting India today.

The counterbalance to the Indo-American alliance is the alliance of Pakistan and China, on the one hand, and Russia and Syria, on the other. In turn, Russia in Syria is held back by Iraq, which is dominated by the Americans. But Iraq is also under pressure from Iran, which often acts on its own. Turkey? Erdogan is also a largely independent figure. Pakistan supports Afghanistan in the west ... Very rude, but understandable, as it seems to me.

Simply because in this way this existing balance of power will be upset. The withdrawal of army units from Afghanistan will give Pakistan a significant advantage. Islamabad will be able to redeploy significant forces to the Indo-Pakistani border.

This will naturally raise questions from American friends from New Delhi. Why such friendship if India is forced to strengthen its borders with Pakistan? Isn't it easier to return to good-neighborly relations with China, and therefore with Pakistan?

Even the promises of the Kabul government to provide comprehensive assistance to India and guarantees from the United States will not be able to shake the doubts of the Indians. Kabul (as has traditionally been and is in Afghanistan) only controls Kabul. All other provinces are ruled by local authorities.

It turns out a vicious circle.

It is necessary to withdraw the troops, but not.

Calm in Afghanistan is not expected

Alas, a calm and peaceful life will not shine for the long-suffering people of Afghanistan in the near future.

Geography (more precisely, the geographical position of the country) has always been the enemy of peace in this territory.

The geopolitical confrontation between the leading countries of the world destabilizes the internal situation in Afghanistan.

The hope for peace that emerged after the US-Taliban agreement (the organization is banned in the Russian Federation) is melting before our eyes.

Ctrl Enter
Noticed oshЫbku Highlight text and press. Ctrl + Enter
We are
The tragedy of the American army ("The Atlantic", USA)Bashar al-Assad: In Syria, not the “revolution” that the enemies are talking about, but the revolution of the army and the people against terrorists
Military Reviewin Yandex News
Military Reviewin Google News
22 comments
Information
Dear reader, to leave comments on the publication, you must sign in.