Praetorians. Creators of the Roman emperors 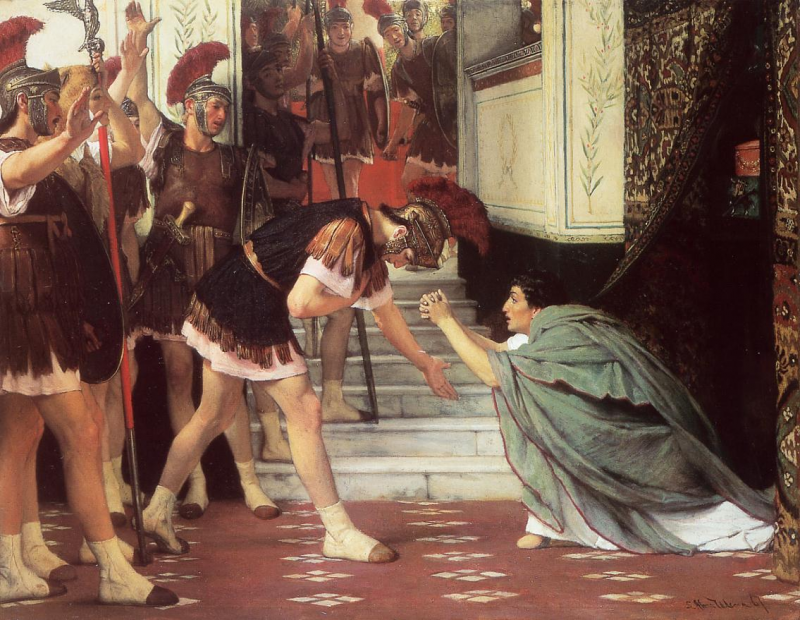 Considering all history humanity, then few military units have ever had such an impact on world history as the Praetorians. Historians call them the first bodyguards in history. But they guarded the most powerful people of their time - the Roman emperors. And the Roman Empire, during its dawn, replaced almost the entire world.

At the same time, the elitism of these units and their high number over time made the Praetorians an independent element of the domestic and foreign policy of Rome.

They not only protected, but sometimes controlled the leaders of the most powerful empire of their time. Overthrew some rulers and enthroned others. Ultimately, this was the reason for the complete disbandment of the Praetorian Guard.

Creation of the Praetorian Guard

In the era of civil wars in the empire, praetorians were called elite soldiers who served as the bodyguards of the warlord. At the same time, in a combat situation, they also performed the role of a well-trained reserve that could decide the outcome of the battle. Many famous Roman military leaders had their own praetorian cohorts. For example, Guy Julius Caesar, Gnaeus Pompey, Mark Antony, Guy Caesar Octavian and others.

After the end of the civil wars, Emperor Octavian Augustus retained all Praetorian cohorts belonging to him at that time, making them one of the elements of his rule. It was Octavian Augustus who created the Praetorian Guard - the personal guard of the emperor, which was devoted directly to him, and not to Rome.

In the Praetorian Guard created by Octavian Augustus, which could also be called the personal army of the emperor, there were 9 cohorts of 500 warriors in each (perhaps their number was already greater then). The composition of the cohorts was mixed: they included both infantrymen and horsemen. Initially, only three cohorts were located directly on the territory of Rome. The rest were stationed in the vicinity of the city.

The Praetorians were the only ones who could wear weapon in Rome. The permanent deployment of three cohorts in the city gradually accustomed the townspeople to the sight of armed people on the city streets. This was contrary to the political and religious beliefs of the Republic era. But it fit into the new reality of Rome. 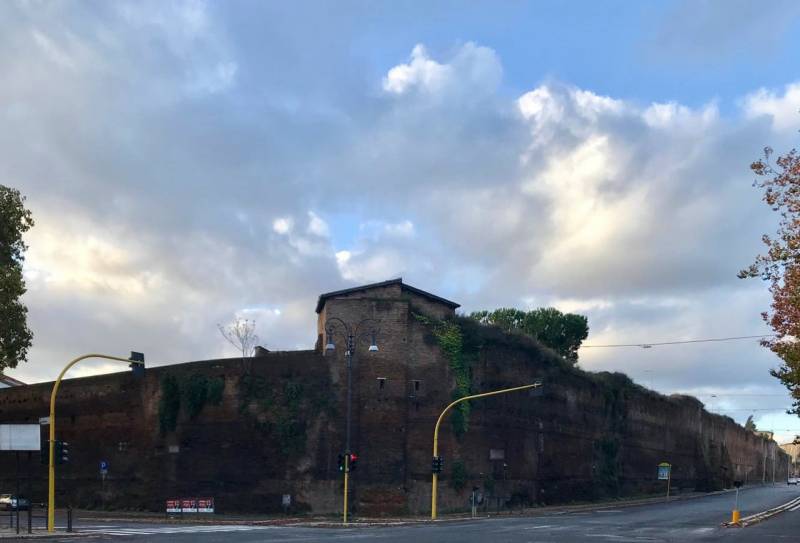 Preserved walls of the Praetorian military camp in Rome, Castra Praetoria
Very quickly, the Praetorian Guard turned into a real stronghold and support of the emperor's power.

After the death of Octavian Augustus, his successor Tiberius in 23 AD brought all the Praetorian cohorts to Rome.

A large military camp was built specifically to accommodate them. The camp was located in the northern part of Rome between the Viminal and Esquiline hills.

Having gathered all the Praetorian cohorts in one place, the emperor received a powerful argument capable of intimidating all internal enemies. And also to provide him with protection in the event of riots, popular unrest in the eternal city or military mutinies that were not uncommon in those days in the provinces. The fortified camp of the Praetorian Guard in Rome was named Castra Praetoria. In fact, it was a real fortress, similar to those that could be found on the borders of the empire.

The composition of the elite Roman army changed over time.

For example, after the reform of Septimius Severus, the guard already numbered 10 cohorts with a total number of 10 thousand people. The number of cohorts constantly varied, in some periods it reached 16.

At the same time, historians today continue to argue about the very number of cohorts. Some believe that under Octavian Augustus, their maximum number was 500 people, others say that already initially, there were 1000 soldiers in the cohorts of the Praetorian Guard.

Privileges of the Praetorian Guard

Like any elite unit, the Praetorians had their own privileges. Their most important advantage consisted in a greater salary than that of ordinary legionnaires. The salary of Praetorians from 750 denarii during the reign of Emperor Augustus increased to 1000 denarii during the reign of Domitian. In different years, it was at least 2–3 times higher than the salary of an ordinary legionnaire.

After completing the service, each soldier of the Praetorian Guard received a lump sum of 5000 denarii against 3000 from ordinary legionaries and 3750 denarii from the soldiers of the city cohort.

There were other payments as well. For example, according to the will of Emperor Octavian Augustus, after his death in 14 AD, each soldier of the Praetorian Guard received 2500 denarii as a gift. Tiberius followed his example. And Caligula even doubled this amount.

In addition, large sums of money were paid to the Praetorians from time to time. For example, on the "round" anniversaries of the reign of the emperor, the birth of the heir to the throne, his majority, as well as on the occasion of the military victories won by Rome.

Also, large sums of money were paid to the Praetorians when the new emperor ascended the throne. Otherwise, it would be very difficult to gain their personal favor and loyalty. 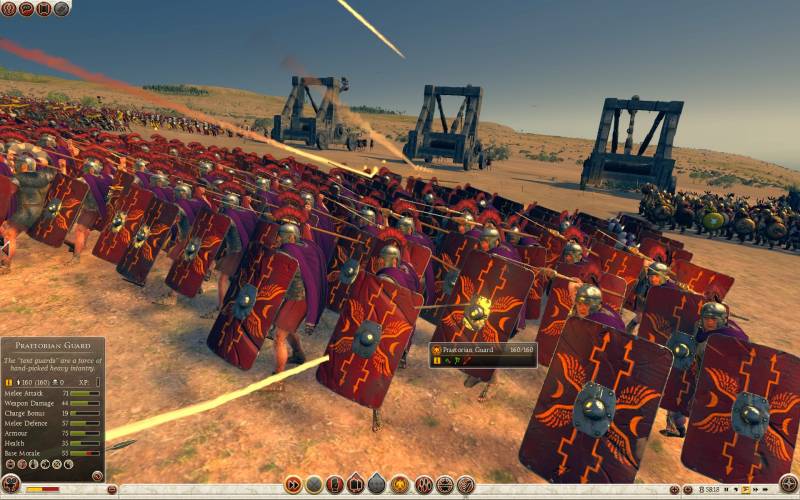 The Praetorian Guard in Total War: Rome II
An important advantage of the Praetorian Guard was the fact that the service life of the legionaries was 25 years, and the Praetorians - 16 years. The retired Praetorians did not always leave military service. They could more easily get an officer's post, especially in the auxiliary troops that were located on the borders of the vast empire, which during its heyday occupied the entire coast of the Mediterranean Sea.

Also, the Praetorian Guard was very well equipped. One of the privileges was that only praetorians (besides the emperor and his family) could wear "imperial purple" in their clothes. For example, they wore purple togas when they were on guard in the imperial palace. The weapons of the Praetorians were often richly decorated, and their ceremonial helmets were crowned with a magnificent crest.

Before the reign of Septimius Severus, only natives from the territory of Italy were enrolled in the guard. The acquisition was voluntary. They tried to give preference to people from the middle class and honorable families of the Italian municipal nobility. The guard opened up good career prospects, promised excellent income and good support.

The money issue ruined them

Over time, the praetorians began to play a huge role in the politics of Rome, the fate of the emperors directly depended on their loyalty.

You could buy this loyalty with money.

But not everyone was able to collect the required amount. And then the bodyguards could turn into killers. Many emperors were killed by the soldiers of the Praetorian Guard or by the Praetorian Prefect himself.

And with each new emperor, the requests became more serious.

For example, after becoming emperor, Caligula paid each of the guardsmen five thousand denarii. This was twice as much as Tiberius, who ruled before him, gave them. But even that did not save him. He was killed by conspirators from among the Praetorians. It is believed that he was personally killed by the tribune of the Praetorian Guard of Khera. True, it should be noted that Caligula was perceived by his contemporaries as a cruel and voluptuous tyrant, a madman.

Having got rid of the objectionable ruler, the Praetorians elevated Claudius to the throne.

The new emperor promised to pay each soldier of the guards 15 thousand sesterces, about 4 thousand denarii. However, he failed to collect such a sum. The next contender for the throne, Pertinax, decided to reduce the rate to 12 thousand sesterces. But we didn’t manage to collect this amount either, only half was found. As a result, the Praetorians, dissatisfied with the failure to fulfill their promises, killed Pertinax, whom they themselves had elevated to the throne three months earlier. The severed head of the emperor was then carried by the praetorians through the Roman streets. 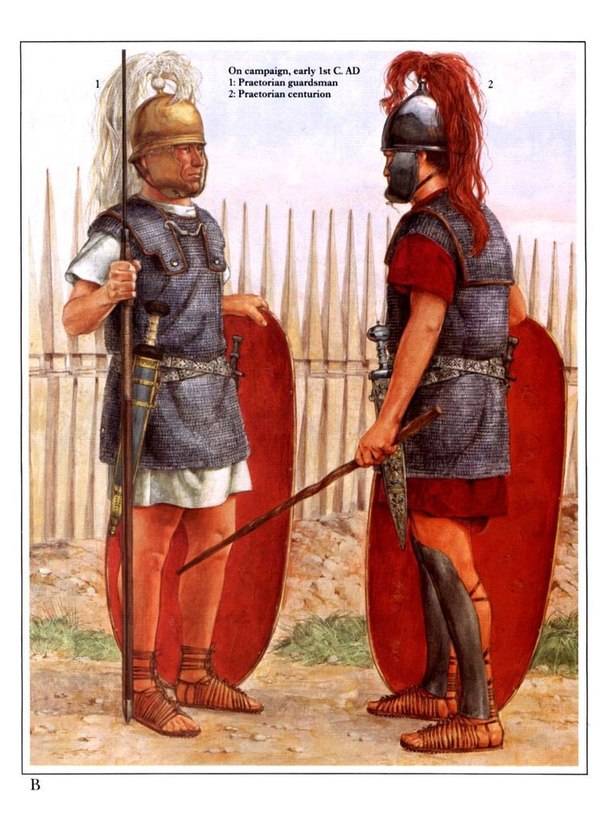 Praetorians, early 1st century AD
After such a development, the stakes in the struggle for the loyalty of the praetorian cohorts began to grow again.

In 193 AD, the supreme power in the powerful empire was actually put up for auction.

It was a fabulous sum, which was the salary of a soldier for several years of service. At the same time, Didius Julian failed to pay off the guardsmen. And no one defended him when the senate decided to depose the emperor, giving preference to the commander Lucius Septimius Severus.

In this case, the Praetorians themselves became emperors.

Thus, the Praetorian Prefect Macrinus became the head of a conspiracy to assassinate the Emperor Caracalla from the Severian dynasty. After his assassination, Macrinus himself ascended the Roman throne.

End of the Praetorian Guard

The Praetorian Guard ended its existence in 312.

The significance of the battle was not only in the elimination of the Praetorian Guard, which had earlier brought the usurper Maxentius to power. The world-historical outcome of the battle was that it ultimately contributed to the legalization of Christianity and its transformation into the state religion of the empire.

Battle of Mulvian Bridge, Giulio Romano
In the battle itself, both the infantry and the cavalry of Maxentius wavered and fled almost immediately. But the Praetorians held out and maintained their positions. In the end, they alone remained against all the forces of Constantine and were pressed against the Tiber. The Praetorians continued to fight until they were overcome by fatigue and the overwhelming superiority of the enemy forces. Many of them found their death on the banks and in the Tiber River, like Maxentius himself.

After the battle, Constantine completely disbanded the Praetorian Guard. At the same time, the former soldiers of the Praetorian cohorts were sent to various border units stationed on the banks of the Danube and Rhine - away from Rome.

Also, by order of Emperor Constantine, the Praetorian barracks in Rome were destroyed - their fortress Castra Praetoria.

Only the northern and eastern parts of the wall remained from the fortress, which became part of the walls of the city itself.

Constantine the Great destroyed the Roman Praetorian camp as

"A constant nest of rebellions and strife."
To replace the Praetorians, various new guards units were formed, not so numerous.

Barbarians and representatives of the outlying provinces of the empire were now actively recruiting to serve in them.