How a brave jackal bit a dead lion 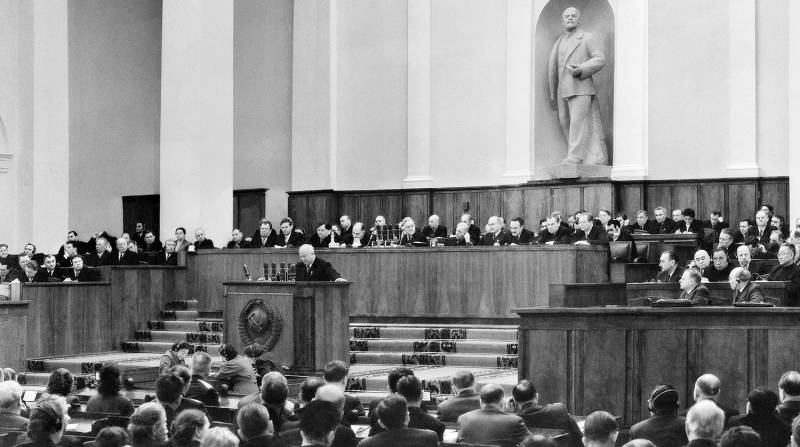 First Secretary of the CPSU Central Committee Nikita Khrushchev speaks at the XX Congress of the CPSU in the Kremlin, 1956 © Vasily Egorov / TASS Photo chronicle

In his quest for unlimited power, Khrushchev first eliminated his main rival, L. Beria (The black myth of the "bloody executioner" Beria; Part 2), who, apparently, was simply killed during his arrest.

He pushed back from management the Chairman of the Council of Ministers of the USSR G. Malenkov, who was considered the heir of Stalin. Then he struck a blow at the deceased leader, starting a de-Stalinization process that was destructive and suicidal for the Soviet country in its consequences. In 1957 he finished off the opposition (the so-called "anti-party group") represented by Molotov, Malenkov and Kaganovich. Then he sent Marshal Zhukov into disgrace, who had previously supported him shortsightedly.

In his struggle for power, Khrushchev relied on the "fifth column", those who to some extent suffered from Stalin's policies. The underdog and hidden Trotskyists, internationalist revolutionaries, nationalists and just people with a philistine, petty-bourgeois psychology, who did not want to "go to the stars", wanted stability and wanted to enjoy power. To do this, it was necessary to destroy the society of knowledge, service and creativity created by Stalin, to form its own analogue of a consumer society and to come to an agreement with the West.

Stalin actually created a new ideology. Formally, Marxism-Leninism remained in the USSR. But de facto it was the Russian idea of ​​creating a society of people of the future.

The project "Light Russia" ("City of Kitezh"), the state of kindness, justice and love for people, was revived. Hence the incredible popularity of the USSR in the world in this era. And the amazing miracles that Soviet people performed in the name of a big idea.

Thus, under Stalin, the Russian people and other indigenous peoples of Russia performed three miracles: - - rebuilt the country after the ruins of the Troubles;
- defeated the "all-European horde" led by Hitler ";
- they restored the state again after the Great Patriotic War and gave such creative energy to the Union that it was a world leader for another thirty years.

Joseph Vissarionovich recreated the Russian Empire. He returned to her many of the lost lands - the Baltics, Vyborg, Western Belarus and Ukraine, Moldova, Bukovina, Southern Sakhalin and the Kuriles. He returned power and greatness to the Russian state.

We have restored a sphere of influence in Eastern and Southeastern Europe, in the Far East (Port Arthur, friendly North Korea and communist China). They created and tempered in a terrible battle the best army in the world.

Formed the world's best system of science, upbringing and education. Stalin launched a Russian (Soviet) project of globalization, an alternative to the Western one.

A powerful industry was built, with the most advanced industries (nuclear, space, rocketry and aircraft construction). The Russians began to build the world on the basis of the brotherhood of peoples and co-prosperity, which dealt a mortal blow to the Western slave-owning society.

Thus, under Stalin, the Russians restored all the best that was in the Russian Empire (classical school and culture, army, navy, etc.). And we went further, building the civilization and society of the future, overtaking the West and the whole world in humanitarian, social and cultural terms - for an era.

During this magnificent and amazing period stories Stalin was judged by the children of "fiery revolutionaries", the heirs of Trotskyism, under the lies and deception of Khrushchev.

Prior to that, Khrushchev was known mainly as one of the "jesters" with the owner. As a completely obedient and unprincipled executor of the will of the sovereign. Of course, with such "authority" he could not hold out on the throne for long. Therefore, the incompetent and narrow-minded, although rather cunning Khrushchev, apparently at the suggestion of his more far-sighted assistants, began to kick the deceased owner, spit on another statesman who had gone into the world.

The “fifth column” (Trotskyists, internationalists, nationalists and cosmopolitans), which was hidden and half-crushed under Stalin, liked it, as did the West.

The special services of the West began to play the "card" of Khrushchev.

And the Khrushchevites have made great strides in the field of de-Stalinization. In essence, this was the course of the ruin of Russia (Betrayal of the USSR. Perestroika Khrushchev; "Khrushchev" as the first restructuring; Part 2).

The Armed Forces, the national economy, and the Russian Church, which under Stalin was undergoing a period of revival, suffered enormous damage. The Russian "unpromising" village was destroyed, the Great Russian central provinces-regions were bled. That laid a powerful "mine" under the demography of the Russian state.

The "thaw" in cultural and social life undermined the Russian "imperial" style, which was formed under the red emperor.

Khrushchev introduced universal egalitarianism, destroying the healthy hierarchy, the new national elite of the Red Empire. Under Stalin, the best people of the country, proving this with their minds and inventions in labor and in battle, became a kind of Soviet aristocracy. University teachers and Stakhanovite workers could receive more Union ministers.

Khrushchev's egalitarianism destroyed all this. Now the low-skilled worker was paid more than an engineer or teacher. Healthy motivation to learn, improve, improve your level and qualifications has been undermined.

The time will come and the monstrous role of Nikita Khrushchev, who dressed up in "Russian" kosovorotki, portrayed the age-old Russian muzhik, but actually destroyed Russia, will be revealed and exposed to the end.

It was during Khrushchev's time that he planted that mental bomb that would destroy Soviet civilization.

Of course, Khrushchev will be neutralized.

The most dangerous "distortions" will be corrected. The Soviet nomenclature was just beginning to decompose at that time. The terrible era of betrayal under Gorbachev was still quite a long way off.

However, Khrushchev's "perestroika" will close the USSR's path to the future. Brezhnev never dares to completely clean up the "Khrushchevs", to return the country to the Stalinist path of development.

Stalin, however, does not need justification and protection.

His deeds speak for him.

He accepted a "killed" country, a demoralized population. And he left - a superpower, a victorious people full of creative energy.

He showed the main path to the salvation of Russia and all mankind - to the stars.

The Stalinist period in the history of Russia was a period of power, greatness and prosperity of our Motherland.

Until now, "perestroika-reformers" of all stripes have been unable to steal Stalin's legacy, the property of the people of this great era.

That is why the social engineers of the West urgently needed then to reformat this popular love and respect for Stalin into a negative "cult".

Ctrl Enter
Noticed oshЫbku Highlight text and press. Ctrl + Enter
We are
Beria is the protagonist of the USSR atomic projectKhrushchev: The murderer of Stalin and the USSR
Military Reviewin Yandex News
Military Reviewin Google News
351 comment
Information
Dear reader, to leave comments on the publication, you must sign in.