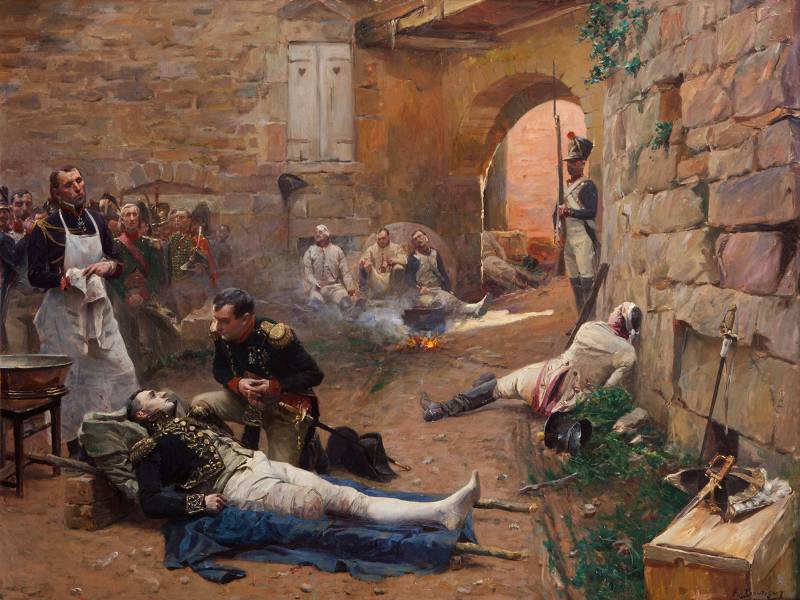 Napoleon before the dying Marshal Lann after the Battle of Essling. Painting by Paul-Emile Boutigny. The conditions of keeping the wounded in the hospitals of the era of the Napoleonic wars are clearly visible.


Most of the wars of the XNUMXth century at their initial stages focused on the siege of border fortresses in order, after their fall, to open an operational space deep in enemy territory. Therefore, military hospitals were installed exactly near the fortresses, not caring at all that such institutions could operate in other regions. Far from the theater of military operations, one could count only on civilian shelters, church monasteries and help from the local population.

The first revolutionary war of 1792 exposed the complete failure of such a system. Then, for the first time, a mobile war was waged, the fate of which was decided in the field, and not under the fortress walls. Also, for the first time, the army in the field was mostly staffed with volunteers who were much weaker than professional soldiers and much less adapted to the hardships of a wartime. Therefore, the number of sick and malnourished people has increased dramatically. Moreover, the French army has grown significantly in comparison with the army of the French king.

The situation in which the medical service found itself was aggravated by the fact that, breaking with the old regime, the authorities of the revolutionary Republic not only closed medical schools, but also abolished the obligation to have a medical diploma. And insofar as many royalist officers left the army, and among those who remained were constantly looking for supporters of the monarchy, the "old" doctors and surgeons did not enjoy confidence. And the military authorities preferred to attract completely new personnel to the service, even if they did not possess the fullness of professional knowledge.

This is how the principle appeared that

anyone who wishes can treat and even become a surgeon, as long as he only enjoys "civil confidence."
Thus, the decree of the national convention of December 21, 1792 equated doctors with officers. Chief physicians, surgeons, and pharmacists, chief medical officers at army level, became brigadier generals. First-class doctors, surgeons and pharmacists were equated with colonels. 1nd class medics became captains, and 2rd class - lieutenants.

The decree of the convention of March 23, 1793, issued already taking into account the experience of the past war, determined the rules for the recruitment of medical personnel. The new order, first of all, abolished the requirement to have a certificate of "civil trust". And they returned the previous professional criteria.

This did not help much, as doctors and surgeons, frustrated by arbitrary dismissal several months earlier, were in no hurry to return to service. In this regard, the army was again forced to turn for help from all comers who had at least some idea of ​​medicine, including priests and seminarians. Some of them, already in military service, became really good surgeons.

Further, on December 1, 1793, the convention authorized the Minister of War to call into the ranks of all doctors between the ages of 18 and 40. And to send to the military hospitals those doctors and surgeons who previously served in the army as volunteers.

A week later, another decree on the reorganization of the medical service saw the light. Under the Minister of War, a central medical council was formed, consisting of nine people - three surgeons, three doctors and three pharmacists. They were appointed by the minister from among physicians with 20 years of experience in military medicine, and of them - at least a year in command positions.

Each army of the Republic introduced the posts of First Surgeon, First Medic, and First Pharmacist, who created medical councils for their armies. A senior surgeon was appointed in every infantry semi-brigade and in every cavalry regiment. And in each battalion or squadron there were positions of the first and second surgeons. The task of training doctors was assigned to four hospitals - in Lille, Metz, Strasbourg and Toulon.

The medical service was run by the general military administration. At the army level, she was subordinate to the commissioner-ordinator, and at the hospital - to the military commissar. In theory, both commissioners were supposed to work with the medical officials and work with them to determine the needs of the army. In practice, there was such ambiguity and ambiguity that the military administration gradually took over the entire medical system. It soon turned into big problems.

On February 21, 1794, the new Jacobin government undertook another reorganization. The Central Medical Council was abolished. And instead, the Health Commission was established (Commision Santé), subordinate directly to the executive committee in Paris.

The system of training medical personnel has also changed. Now, to become a military doctor, it was enough to complete accelerated medical assistant courses at the rear hospitals of the army. Again there was a requirement for all doctors to have a certificate of "civil trust".

The slightest suspicion of unreliability was enough for the "enemies of the people" to lose their posts and even go to prison. They were replaced by people trusted by vigilance committees, often without training.

For example, Pierre-François Percy, the luminary of modern military medicine, had to take an exam in medicine for 28 hours in front of members of the municipality of provincial Bouzonville, who did not have the slightest idea of ​​medicine.

On May 19, 1796, the directory carried out another reorganization of the military medical service. The health commission was abolished, and in its place were introduced inspectors general, appointed by the minister of war, that is, in fact, subordinates to him. Worse, physicians were directly subordinated to ordinators and military commissars, who were free to establish, at their own will and in all details, the organization and operation of hospitals and infirmaries, as well as appoint and dismiss doctors, surgeons and pharmacists who were "untrustworthy"

Since then, the administration has been empowered to decide what the medical service should look like in wartime. In other words, the ordinators and commissars determined how many wounded would need to be treated, what their needs would be, and how to meet them.

In addition to the humiliation that such reforms brought to medical specialists, often dependent on ignoramuses and crooks, these decrees had sad consequences, as they created fertile ground for corruption and enrichment at the expense of the wounded under the pretext of saving money. In a situation where ordinators and commissars decided everything (how much money should be allocated for the maintenance of the wounded, how much to spend on their treatment, and how much on tolerable conditions), rare hospitals and infirmaries were kept at an acceptable level. Criticism and protests from doctors often ended with their dismissal from the army or transfer to another unit.

This pernicious tendency to save on everything at the expense of the wounded continued in the next decrees of Napoleon Bonaparte.

A decree of 12 August 1800 reduced the number of military hospitals to 30. Only four hospitals: in Paris, Lille, Metz and Strasbourg, retained the right to train new personnel.

The next decree of December 7, 1800 reduced the number of hospitals to 16. The result of this "effective management" was the dismissal from the army of all doctors, surgeons and pharmacists who were not currently directly involved in providing medical care. Worse, these often experienced and honored professionals received only small pensions and justifiable disappointments.

Finally, on October 10, 1801, another batch of doctors was dismissed from the army.

And among them are those who entered the service by conscription in 1792 as young students without diplomas, but gained extensive experience in an endless series of wars over almost ten years.

A sharp decline in the number (especially) of surgeons led to the fact that a large number of the wounded had to be sent to civilian hospitals and shelters.

Preparing for war with Austria, Napoleon issued on September 4, 1805, an order to register all doctors whom he had previously so frivolously dismissed from military service.

Responsibilities for registration were assigned to prefects, who, despite all calls and persuasions to doctors to return to the service, did not achieve the desired results.

As a result, the medical service of the Grand Army did not cope with its tasks when it had to deal with thousands of wounded at Austerlitz.

An urgent measure to improve the situation was the conscription of civilian surgeons into the army.

But since the 1805 campaign ended in victory, it was decided not to deal with medical problems anymore and leave everything as it is, that is, not to increase the staff.

It was only after the defeat in the campaign against Moscow that Napoleon made another attempt to improve the medical service of the Grand Army.

On April 1813, XNUMX, he ordered each department to dispatch one physician and four surgeons to the army.

And on May 12, he demanded three more surgeons from each department.

But the human losses of the war of 1812 were so catastrophic that new reinforcements were no longer able to adequately replenish the medical service of the Great Army.

Ctrl Enter
Noticed oshЫbku Highlight text and press. Ctrl + Enter
We are
Waterloo How Napoleon's Empire Perished"Flight of the Eagle." Like Napoleon with a handful of soldiers and without a single shot captured France
Military Reviewin Yandex News
Military Reviewin Google News
46 comments
Information
Dear reader, to leave comments on the publication, you must sign in.