A promising destroyer for the Russian Navy - which one and why? (ending) 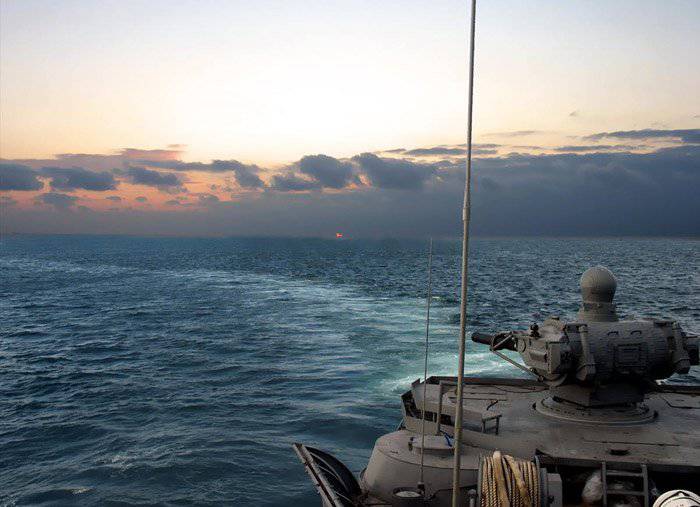 Now is the time to return to the comparison of the tasks and possibilities of promising EM for the Russian Navy and Arly Burke. The Americans created an anti-aircraft / anti-aircraft ship with capabilities to perform the functions of an arsenal ship. Conventional destroyer ammunition (74 missiles CM2, 24 - Sea Sparrow, 8 Tomahawk and 8 ASROK) gives the ship excellent air defense capabilities. With missile defense, alas, everything is not so bright. The fact is that in the United States the question of intercepting low-flying supersonic rockets remained an unresolved issue.

Theoretically, low-flying supersonic anti-ship missiles can be intercepted by the “CM2 Standards”, but they have an interception limit - 15 meters above sea level, and our new anti-ship missiles fly lower. "Sea Sparrow" in the opinion of the Americans themselves are able to intercept only subsonic missiles. True, the Americans recently created the ESSM medium-range SAM, which, according to their statements, is capable of intercepting low-flying supersonic targets, but ...

I have already written above about the differences between semi-active and active GOS Zur. So, the ESSM is equipped with a semi-active GOS, which means that it needs a target illumination station to target the target. There are only three such stations at “Arly Burke” - and, of course, all three work at the same time can not from all angles. Since the 2 radar lights are located behind the second chimney, from the forward angles, Arly Burk has the ability to direct the ESSM with just one anti-ship missile at a time.

A small number of pickup channels, combined with a very average ability to detect low-flying targets with the SPY-1 radar, greatly limits the capabilities of the Arly Berkov missile defense system. The fact is that decimeter radars do not very well see what flies right above the sea surface (Americans for decades have tried to adapt it for these purposes). They generally squeezed everything possible, accomplished a real feat in software, learning to peel off most of the interference and Now “Spay” distinguishes low-flying targets relatively well, but all of this in aggregate does not make American ships a record holder in the PRO-capabilities.

In this respect, the newest British destroyer Daring is much more powerful than Arly Burke. Its SAMPSON surveillance radar is essentially a 2 radar in one decimeter and centimeter range. In the decimeter range, the radar performs long-range detection of targets, but in centimeters it perfectly “sees” everything that happens at the surface of the water (there is no hindrance to interference in the centimeter range, it sees much better at water than decimeter radars :)). And leads to any target missiles with active seeker.

Even such a thing as a radio horizon for "Derring" is much more than for Arly Berkov. I believe it is clear to all that the radio horizon is a relative concept and depends on the height of the radar placement above sea level. See where the “Junction” grids on “Arly Burke” are located (rectangular blocks on the superstructure) 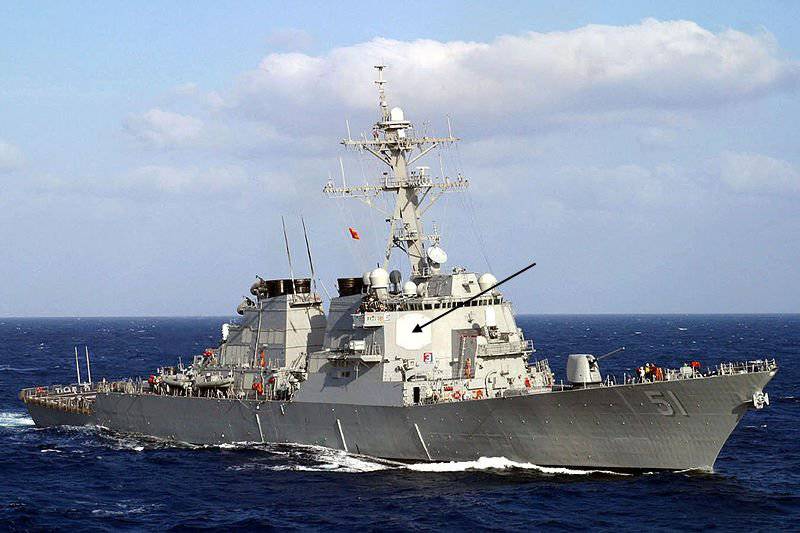 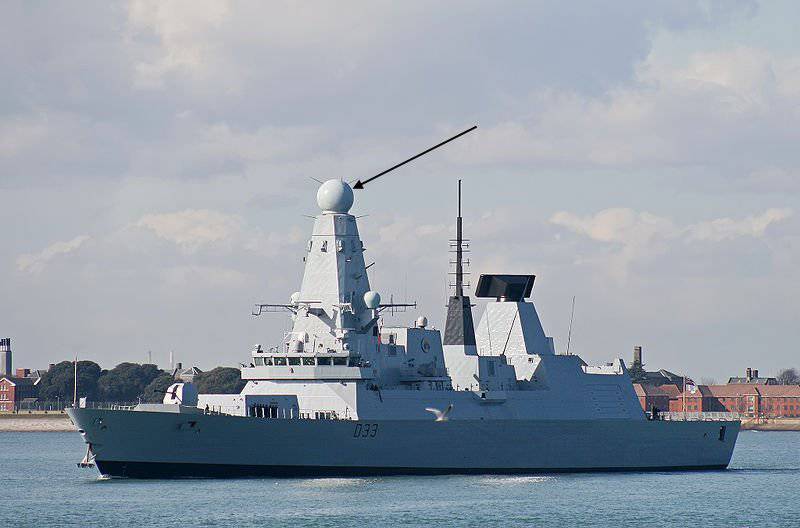 Previously, on the "Berks" was a pair of "Volcano-Falanx" This was a very good complex for its time. But he was counting on the opposition of relatively small subsonic anti-ship missiles, or large, but already damaged by close interruptions of anti-aircraft missiles. Its ability to counter heavy supersonic anti-ship missiles tends to zero. And on the last series of "Berkov" "Falanx" has already been removed.

Arley’s PLO is probably even more modest than missile defense - it’s all about the extreme weakness of its anti-submarine weapons. The ASROK complex did not fly for a long time more than 10 km (it is now flying 20). Available 324-mm TAs with Mk46 had an even smaller defeat distance. At the same time, under his circumstances, the modernity of the SAS of submarines made it possible to “target” enemy surface ships in ideal conditions even from a distance of 90 km., And in less ideal ... well, tens of kilometers. And at such distances all the hope of “Arly Burke” was solely and exclusively to their deck helicopters, of which 2 was the only one and they could not organize a round-the-clock watch. True, the situation was changed for the better with the advent of a very powerful hydroacoustic station AN / SQS-53B / C, which with good luck could detect enemy submarines from a distance of several tens of kilometers ... but in practice it would have looked like that. An unknown underwater target was discovered, kilometers in 40 from the ship.

And they went, until they prepare the helicopter for departure, until it takes off, until it leaves the submarine area ... all this time it remains only to pray to all sea gods and wipe cold sweat every second, looking at the radar - will there be any illumination? cruise missiles from this very submarine? Our ships equipped with rocket-torpedoes with a range of 50 km on this background look much more advantageous.

Apparently the whole point is that the US PLO tasks were to a greater extent placed on deck Aviation - in the old days, they were solved not only by PLO helicopters, but also by the regular Viking squadron, capable of suspecting something big and unfriendly, quietly creeping up to the ACG under water, to check the thickness of sea waters for 300 kilometers in any direction from an aircraft carrier ... But the days of the Cold War have passed, the Vikings were written off for wear and tear, but they did not develop new aircraft - save, p. However, I was distracted again.

“Arly Burke” has a very high potential for strikes against ground targets - in the shock version the ship is loaded to the 56 KR “Tomahawk”. This is a huge force that can suppress the air defense of a small country. But the potential of Arly Burke to destroy surface ships is extremely small.

In fact, the commander of the ship has only the 8 RCC "Harpoon" at its disposal, which is enough except for the elimination of a corvette or a missile boat that turned out to be at the wrong time and place. And even then - the latest versions of “Arly Berkov” are completely devoid of “Harpoons”. “Tomahawks” in the PKR version have not been used for a long time, and, frankly speaking, subsonic CRP is not a very serious danger to a ship with modern air defense / missile defense. There is still shooting anti-aircraft "Standards" at the line of sight. And that's all.

Thus, it is easy to conclude that even Arly Burk, the support of the United States AUG, which many military analysts consider to be the best destroyer of all times and peoples, a magnificent main combat rocket-artillery ship of modernity, does not fully meet the requirements of a prospective destroyer RF. Although, of course, handsome, infection 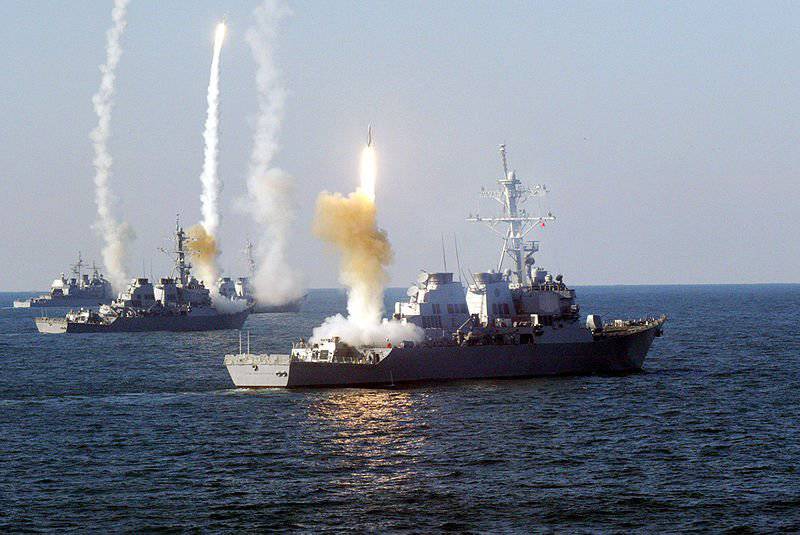 What can we say about smaller ships, like the "Alvaro de Bazan"? This ship, in contrast to the "Arly Burke" has not even 3 station illumination targets, but only two. Those. from different angles, he is able to direct missiles at only one, maximum - two attacking anti-ship missiles. If we compare this with our promising 9M100 SAMs, which must seize enemy missiles with their IR homing heads even before our anti-missile system leaves the launcher ... UVP on 48 cells is acceptable for a ship operating in the near-sea zone, but for the ocean it is a miser. Having thrown there four dozen “Standards” and 40 ESSM, you can still talk about some kind of aircraft defense, but the impact capabilities will be reduced to almost zero. Eight "Harpoons" in deck installations can only scare the Somali pirate. At least some sane PLO can be achieved only by placing PLUR ASROK in the CIP - and the cells are worth their weight in gold ...

Again, as I already wrote above, the UHM Mc41 is designed for approximately one and a half ton rockets. If you build a Russian "Bazan" with Russian weapons (and who will sell us "Aegis" with "Standards"?), Then you will either have to forget about heavy missiles, limiting yourself to "Poliment-Redut" with medium-range and short-range missiles for launching heavy missiles and “Onyxes” with “Calibers” but ... at the cost of reducing ammunition. And we will not have 48 cells, but well if 32.

In general, a small ship - it is a small ship, and its capabilities will always be very limited. As one Englishman said: “If a ship that can hold 8 guns is 10, only 6 will be fired”. Or, as the inscription in one minibus even more concisely expressed the same idea:
"Do not push nevpihuemoe"

The Spaniards themselves do not in any way see the Alvaro de Bazan series as a certain Squadron of the Open Ocean. They are designed to operate as part of a search and strike group led by an aircraft carrier in the area of ​​Gibraltar - and that’s all.