The history of the creation of a thermoelectric current generator

February 17 2021
130
In 2020, on the pages of "Military Review" appeared article about stories creation of a small-sized solar battery BSP-1, which was developed by order of the Ministry of Defense for the specific needs of the special radio communications service of the GRU General Staff.


The text of the article stated:

“Based on the current situation, the management of the GRU General Staff set the task of the operational and technical management to conduct R&D on the creation of portable power sources for such situations.

Specifically, this issue began to be dealt with by the department under the leadership of Ph.D. Colonel Evseenkov P.T.

Two low-budget R&D projects began almost simultaneously, and in one case they used the principle of converting solar energy into electrical energy, and in the other they used semiconductor thermoelectric converters to obtain the required charging current. "

During the discussion, information appeared about the fate of the second R&D, during which one more rare product was created, the fate of which is practically unknown to this day.

“A generator based on semiconductor thermoelectric converters with the same output characteristics was developed for the northern regions.

R&D was carried out and prototypes were created, which passed State tests ”.
But the product did not go into mass production for a number of reasons, which will be described below.

The maximum charging current of the developed thermoelectric generator, as well as the current for powering the electronic equipment, was 2 A at a voltage from 12,6 to 13,8 V, as described in the TTZ. And the minimum is –100 mA, for a sealed 10NKGTs-1d battery, so that it does not explode during charging.

To understand where the idea of ​​creating such a power source came from, one must turn to the history of the appearance in the USSR of the first thermoelectric generators (TEG), which were created in the interests of the intelligence agencies of the Red Army.

The first practical application of semiconductor thermoelements was carried out in the USSR during the Great Patriotic War under the direct supervision of A.F. Ioffe.

When the Great Patriotic War began, physicists of the Leningrad Physics and Technology Institute developed specifically for partisans and sabotage groups thrown into the rear of the enemy, a thermoelectric generator TG-1, known as the "partisan bowler".

The work on its creation was supervised by one of Ioffe's colleagues, Yuri Maslakovets, who became interested in thermoelectric phenomena in semiconductors even before the war.

TG-1 really looked like a pot, filled with water and installed on a fire.

The compounds of antimony with zinc and constantan, an alloy based on copper with the addition of nickel and manganese, were used as semiconducting materials.

The temperature difference between the fire and the water reached 300 ° and was sufficient to generate a current in the thermoelectric generator. As a result, the guerrillas charged the batteries of their radio station. The power of TG-1 reached 10 watts.

The production of the generator was launched in March 1943 at Research Institute 627 with an experimental plant No. 1. The principle of operation of this "pot" is well understood from the following figure: 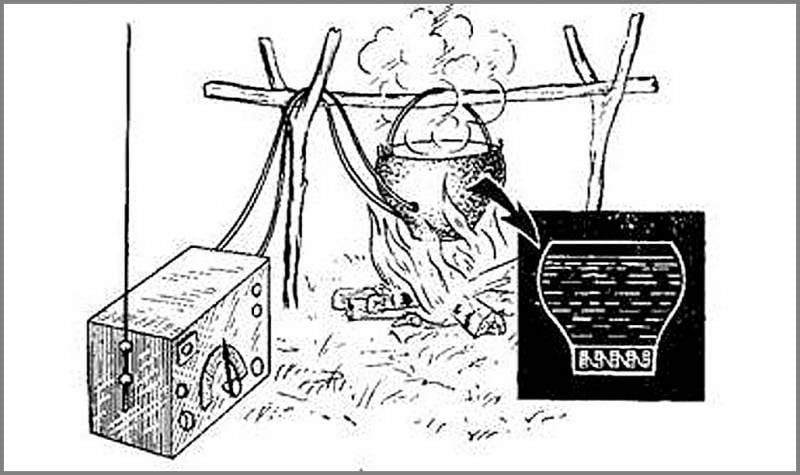 Source: armystandard.ru
In the post-war period, work on such equipment was carried out in the interests of the national economy in order to provide power supply to remote areas and sparsely populated areas. And several types of thermoelectric generators of different designs were created for low-power consumers.

Serially produced, for example, devices called TGK-3 and TEGK-2-2, designed in the form of a nozzle on the glass of a standard kerosene lamp: 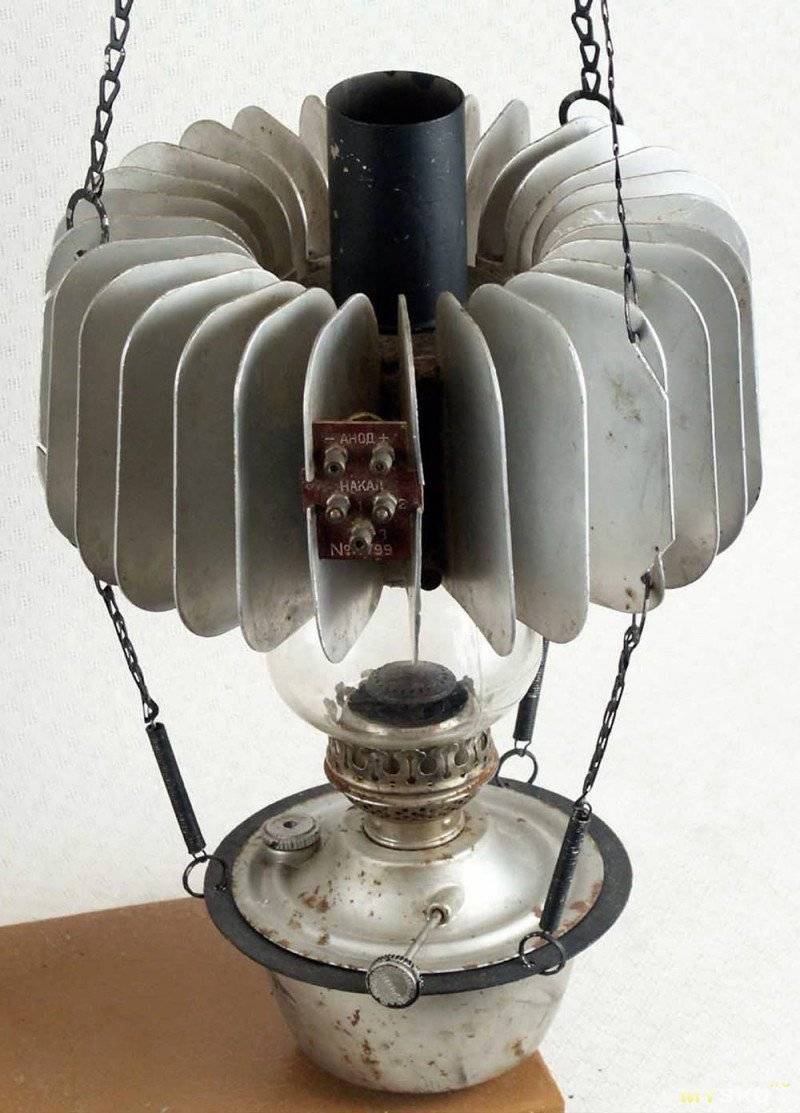 Source pbs.twimg.com
Some were designed in the form of kerosene gas burners (wick kerosene burners for cooking) of the TGK-9, TGK-10 and TGU-1 models. More powerful, but without the accompanying lighting effect. 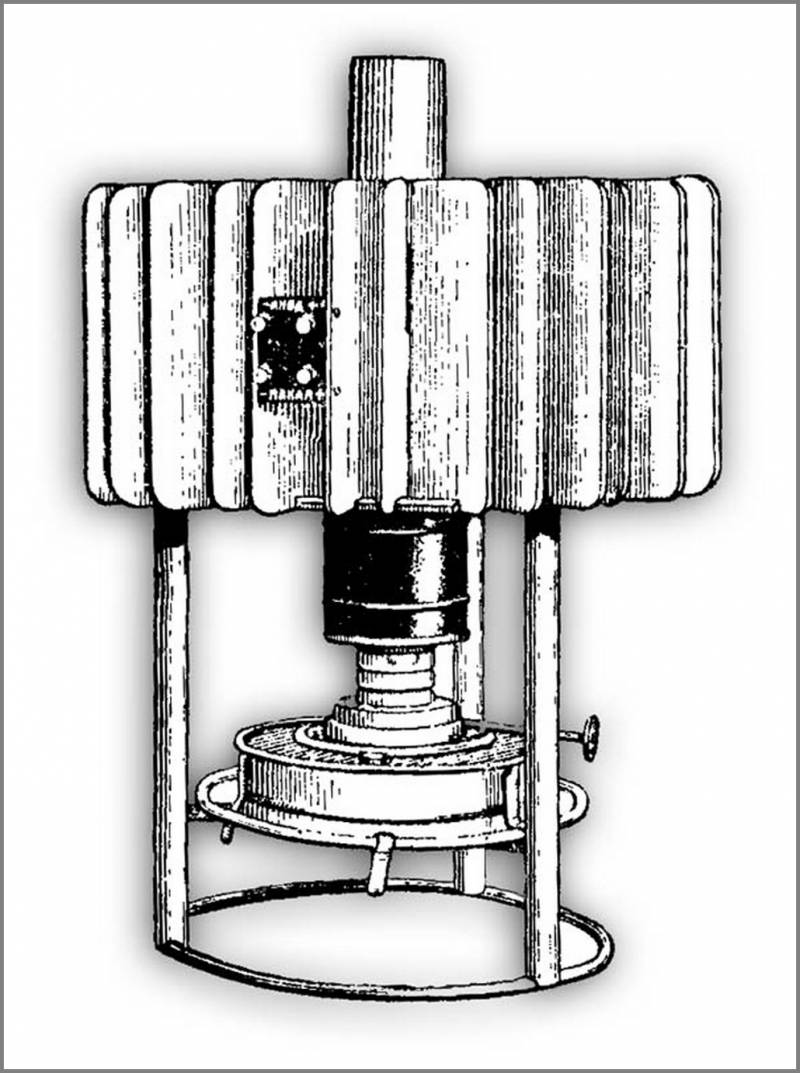 Source: tvzvezda.ru
True, it should be noted that thermoelectric generators were not widely used in the country, since they had low power. And their production was subsequently reduced.

In the Armed Forces, their development was not carried out until the eighties, when urgent need forced them to return to the creation of small-sized power supplies.

The reasons were described in detail in the article on the solar battery BSP-1, which explained why these products were created.

Having received information about scientific developments in this area at the USSR Academy of Sciences, it was decided to conduct two research projects in different organizations in order to identify the possibility of creating such equipment with given weight and overall characteristics and an output power of about 25–30 watts.

One R&D was carried out at the Specialized Design and Technology Bureau at the Chernivtsi State University. And the other is in the Leningrad branch of the All-Russian Research Institute of Power Sources. The Chernivtsi SKTB "Fonon" investigated the possibility of creating three different TEGs with different parameters for some situations.

In particular, the first option provided for receiving a charging current from a vest on a person. And the temperature difference between the body and the environment was used. Along the way, he could perform the functions of a body armor in certain cases, but not a high level of protection.

This option was not developed, since a too small temperature difference gave a small current.

The second option provided for obtaining a voltage of 12,6 V from a thermal charge or thermite block, which, during the burning time, could provide the TEG current necessary for transmitting a short message or signal in certain situations through a HF radio station.

The third option provided for the creation of a TEG for long-term operation, of the type that was used during the war years.

Unfortunately, this organization did not go further than research work. Since the capabilities of SKTB "Fonon" did not allow organizing something serious even at the level of a small series. Therefore, further cooperation was terminated. Despite the fact that the work was completed in full, and the commission accepted it, the organization refused to carry out the R&D work.

More serious scientific work under the code "Souvenir" was carried out at the Leningrad branch of VNIIIT, which at that time was headed by E.K. Iordanishvili, Doctor of Technical Sciences, Honored Scientist of Russia, Academician and Vice President of the International Thermoelectric Academy, student of Academician A.F. Ioffe.

The contractors were offered a choice to develop several TEG variants, which had different types of cooling and different types of burners, in order to increase the efficiency of the entire product. But on the part of the operation service, a strict requirement was set for ROC - the product should not use liquid for evaporation. Fan cooling could not be used. And also the use of any catalytic burners or some other solutions that would raise the price of the product and reduce its reliability were excluded.

Therefore, in the final version, the developers proposed to use the usual "Bumblebee 2" stove as a heating element. 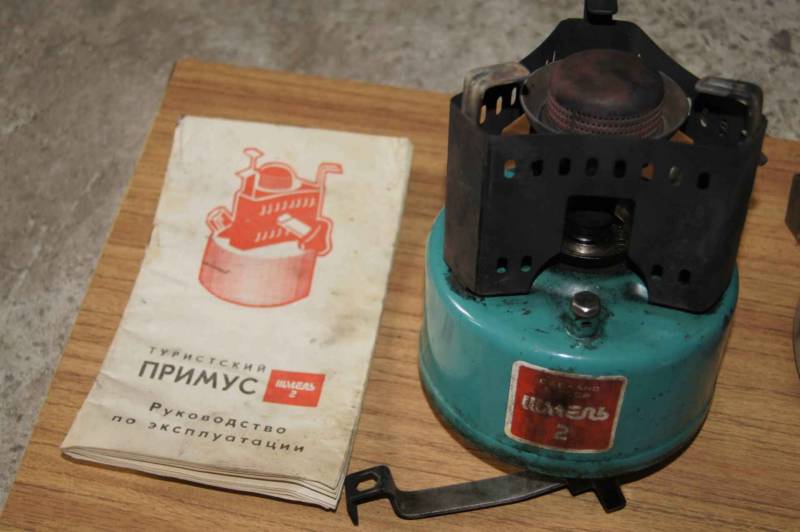 Source: littlehobby.livejournal.com
With specially designed equipment, an approximate sketch of which is shown in the figure. 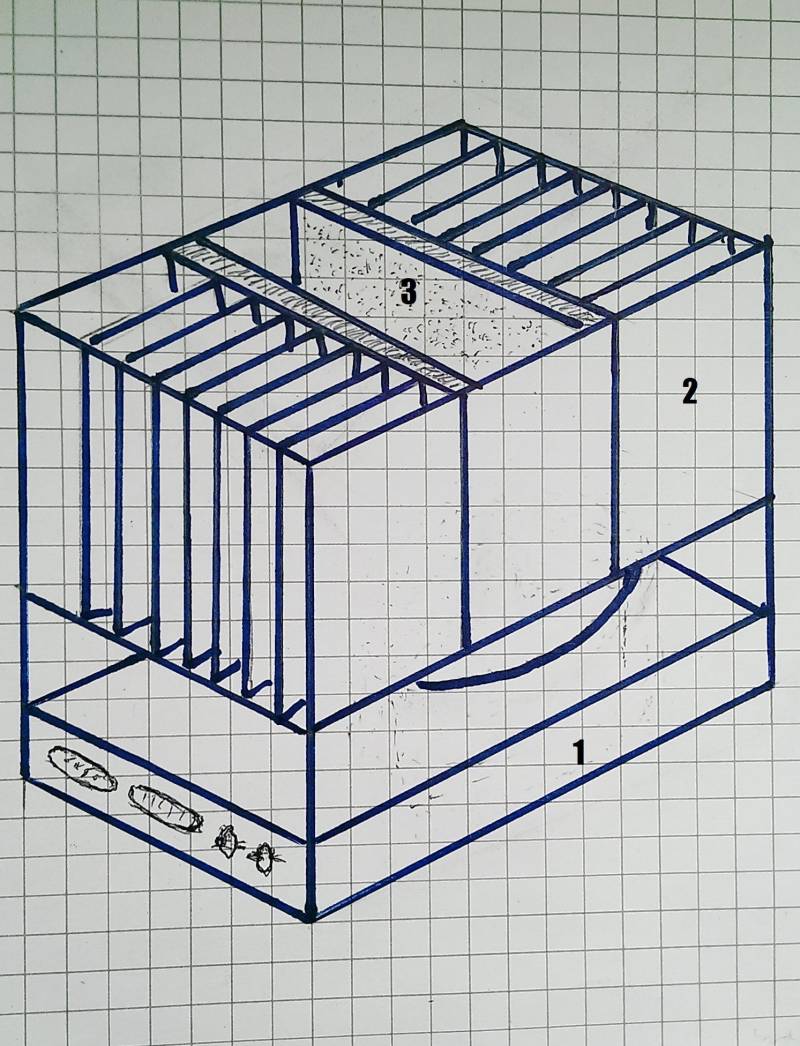 Product "Souvenir", where 1 - electronic unit, 2 - air-cooled radiator, 3 - thermoelectric converters.
The output power of the developed TEG "Souvenir" gave the required parameters. And the design itself met the requirements of GOST in group 1.14. In other words, it allowed landing in GK-30 and provided for a temperature range of operation from –50 to +50 ° С.

The capacity of the gasoline "Bumblebee" was enough for 5-6 hours of continuous operation, which was quite enough to fully charge the 10NKP-6c "Belt" battery in the field. Not to mention the fact that at the same time food could be cooked in any pot, saucepan or frying pan, which were placed on top of the product itself.

The total weight of the entire product in the assembly was about 5 kg, which did not go beyond the customer's requirements for weight and dimensions.

In order to finally decide on the choice of a portable power source, it was decided to send prototypes of the TEG "Souvenir" manufactured at the plant for military tests to one of the special forces brigades.

Six months later, a test report was received, which confirmed all the characteristics of these products. But, unfortunately, it was indicated that it was not advisable to use them in reconnaissance groups. Because it is easier and more convenient to take another charged "Belt".

Perhaps if this product was sent to the 40th Army (Afghanistan), then the conclusion would be different. But such tests were forbidden to be carried out outside the borders of our country. Therefore, we limited ourselves to a conclusion approved by an official of the Special Forces brigade.

Based on this conclusion, at a joint meeting of the customer and the contractors, it was decided not to launch the product into the series. And save the documentation in the archives of the GRU General Staff and the Ministry of Electrotechnical Industry for a possible resumption of the release of these products in wartime or in any other critical situations.

I was forced to recall this product by information on the network, where an advertisement for a modern TEG produced in Perm and having the following characteristics was placed:

Unwittingly comparing what was developed 35 years ago for the needs of the GRU General Staff, one comes to the conclusion that the modern TEG is inferior in weight to the "Souvenir" product. And, moreover, the presence of two coolers drastically reduces the reliability of operation in the field. Not to mention that it is problematic to cook food on such a product.

It so happened that the "Souvenir" product outstripped the current developments in this TEG segment for many years ahead, which, of course, arouses respect for the work of those who created it.

In conclusion, I would like to note that in the eighties nothing similar to the "Souvenir" product was created in the world. And the closest portable TEG, manufactured in Japan, weighed about 18 kg, was intended for indoor use and was powered by liquefied gas.

More powerful installations were produced. But they excluded their mobile use by small groups of military personnel. And therefore, the army was not in service.

At present, in connection with the development of the Far North regions and the deployment of our units there, it is possible that the idea of ​​providing portable TEGs will be returned again. But on a new level.

And then the experience of developing the "Souvenir" product will be in demand.

Some of the peacekeeping missions of our armed forces are also pushing for this, when powerful generators of electrical energy are used at small observation posts, which require high fuel consumption for an internal combustion engine. This is costly and sometimes due to the impossibility of timely delivery of large volumes of fuel due to weather conditions, especially in the mountains or in remote areas.

I hope that this article will open another little-known page of Soviet military developments. And he will tell someone how to solve the problem of providing electricity to small consumers, if the need arises.

I think this will help our Armed Forces and our people not only now but also in the future.

Because the idea of ​​using a TEG is still relevant for some situations in hard-to-reach areas or in emergency situations.

Ctrl Enter
Noticed oshЫbku Highlight text and press. Ctrl + Enter
We are
The history of the creation of one little-known productList of destroyed the largest and most high-tech enterprises
Military Reviewin Yandex News
Military Reviewin Google News
130 comments
Information
Dear reader, to leave comments on the publication, you must sign in.