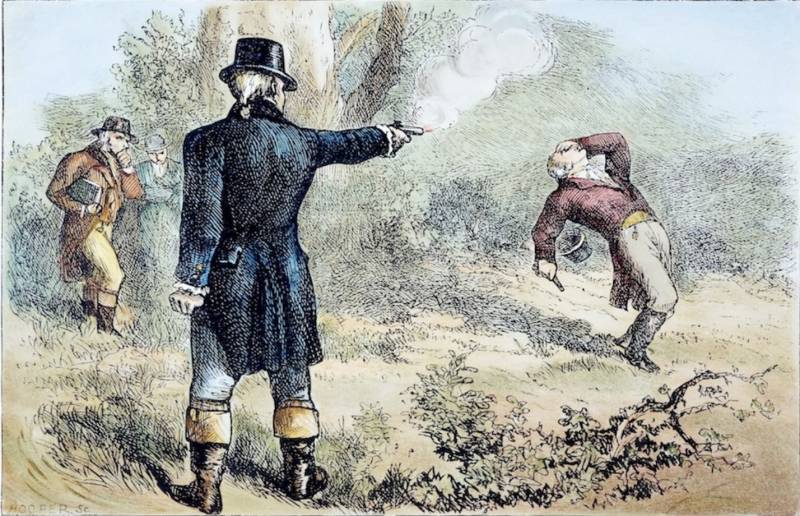 The famous duel in the United States of 1804, when Vice President Aaron Barr and Alexander Hamilton met in a duel. The latter was wounded and died the next day ...

Have rushed. He orders the servant
Lepage fatal trunks
Carry after him, and the horses
Drive into the field to two oak trees.
"Eugene Onegin" A.S. Pushkin
History firearms weapons. More recently, people were, well, the most perfect savages. So the same nobles, even a slanting glance, were considered an insult, which was washed off only with blood.

It is not surprising that duels were universally forbidden, because they took the lives of royal servants without any war, while the nobles should have died only in the interests of the king.

Thus, King Henry IV of France banned dueling on pain of death. And then Kings Louis XIII and Louis XIV followed his example (although not very successfully, according to A. Dumas).

The duelists were punished equally severely by the decree of the King of Prussia Frederick II.

However, this did not stop the nobility. 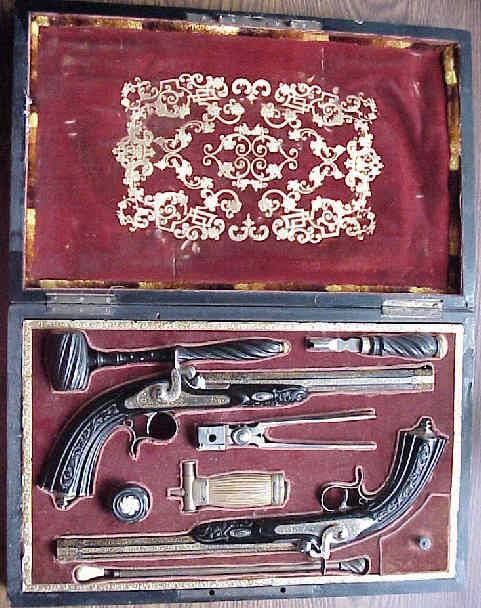 Dueling set by Le Page 1842-1868 Caliber of pistols 12 mm, rifled barrels. It was completed with accessories: a charging ramrod, a bullet, a powder flask, a powder measure and a cleaning. The most important was the powder measure, because special attention was paid to the amount of powder in the barrel when loading pistols. The seconds measured out the required amount in front of each other, making sure that the charges were the same. A pistol set with loaded pistols was delivered to the duel site just before the start of the duel. Photos courtesy of Alain Daubresse www.littlegun.be

In Russia, the creation of a new Russian aristocracy was initiated by Peter I.

And, in theory, all the best should be borrowed from the West, and the worst should be left and left alone. But such a verb of desire at all times remained the voice of one crying in the wilderness. That is, everything was borrowed.

Therefore, Peter had to take care to introduce dueling into at least some framework. That is why in his "Military Regulations" he provided for the "Patent on duels and the initiation of quarrels."

And he did not just forbid, but indicated that

"Those killed in a duel are also subject to death penalty."
In his military article it was written:

“All challenges, fights and fights through this are strictly prohibited <...>

Whoever perpetrates against this, of course, both the caller and whoever comes out, has to be executed, namely, hanged, although one of them will be wounded or killed, or although both are not wounded from that will move away.

And if it happens that both or one of them is a remnant in such a duel, then they will be hanged by their feet after death. " 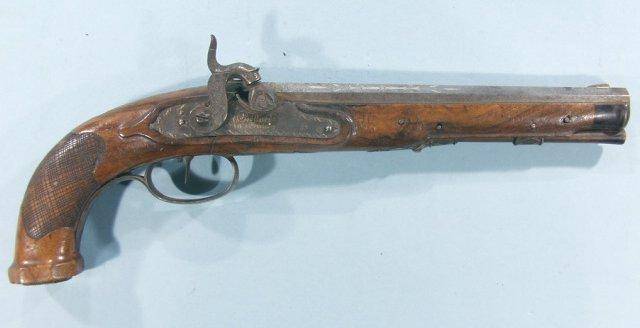 Gollner's dueling pistol from Suhl. Caliber 12,7 mm, rifled barrel, richly inlaid with silver with floral motifs, as well as the manufacturer's name and Gothic letters "In Suhl". Inlays on the lock with the name "Goellner / In Suhl", inlaid with gold. There are gold inlays on the trigger guard and individual details. Walnut stock. Around 1830-1840 Photos courtesy of Alain Daubresse www.littlegun.be

Although at first the main weapon of the duelists was the cold one - a tradition still from chivalrous times, people soon realized that the use of pistols to a large extent equalizes the possibilities of duelists: and the difference in age and in their physical fitness was no longer as important as before.

And learning to shoot accurately was easier than skillfully fencing with swords. A nobleman, and even more so an officer, was simply obliged to be able to shoot accurately. So it is not surprising that already in the second half of the XNUMXth century, it was pistol duels that dominated among all others. Moreover, public opinion, as before, supports the duelists, and does not support the law. That is, people were wild then, wild.

There is a need - there is also a response to it. Already at the end of the 1th century, the design of dueling pistols was fully developed, as was their very appearance. Like the former cavalry pistols of cuirassiers and reiters, they were always made in pairs, and looked like twins. And the only thing that distinguished them was the numbers 2 or XNUMX on the trunks.

According to the dueling code, it was forbidden to shoot from familiar weapons. It was not even allowed to even try the trigger quality of the pistol received from the second. And his own weapon could be used only in the most extreme cases - duels for life and death (due to the "mortal insult"). But this was usually always negotiated between the seconds. And the opponent of the one who proposed it had to agree with it.

The tradition to design dueling pistols so that they differ from others was established by master pistols from England.

Although before them, European gunsmiths worked hard in this field. And, in particular, the French. Since, according to the rules, a misfire in a duel was equated to a shot, they tried to improve the flintlock in such a way that it did not misfire.

Therefore, it is in dueling pistols that flintlocks have reached their maximum perfection. But the last word was said by the British.

They created a waterproof lock, in which the lower part of the flint, which at the same time served as the cover of the powder shelf, began to adhere to it so tightly and so precisely that it became possible to shoot even in wet weather and rain. The bullet was necessarily wrapped in leather and driven into the barrel with a ramrod (blows of a special wooden hammer). And it doesn't matter - smooth or rifled. It was just that the bullet went harder into the rifled barrel. 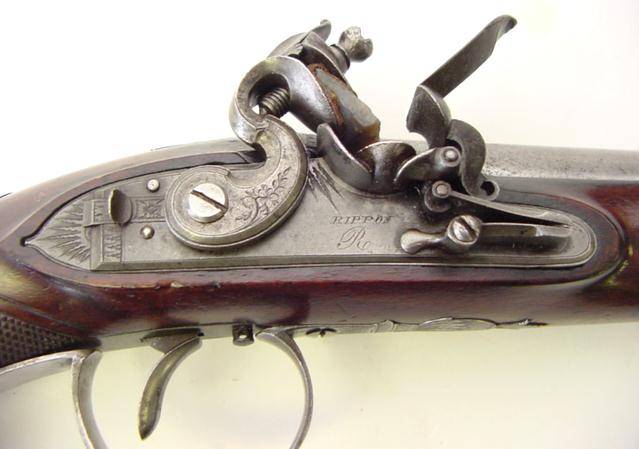 Waterproof lock on Rippon's dueling pistol. Photos courtesy of Alain Daubresse www.littlegun.be
The rules allowed the use of both rifled and smooth-bore pistols. If only they were paired. Some pistols were equipped with a soft trigger. However, the duelists preferred pistols without a schneller.

Since the excitement with him made it easier to fire a random shot, which, nevertheless, was counted. One could easily shoot before the duelist could aim well. Therefore, according to experts in dueling, a rough descent was preferable in this situation.

Ergonomics also played an important role - the shape of the pistol grip, which helped to hold it and better control the barrel. All this made it possible to make a very accurate shot.

Thus, it is known that A.S. Pushkin from a distance of ten steps could hit a card ace with a bullet. That is, he shot no worse than the book Natty Bumpo and the Count of Monte Cristo.

A charge of gunpowder and fairly heavy bullets should have provided destructive power.

The weight of gunpowder in the charging chamber could reach 8,8 g.

When in the 60s. XX century, a special expert commission studied the circumstances of the death of Lermontov, then several dueling pistols of the XIX century were tested. It turned out that in terms of their penetrating power, their bullets are only slightly inferior to the bullet of the TT pistol. But it is known that she could pierce eight pine boards at a distance of 25 m. 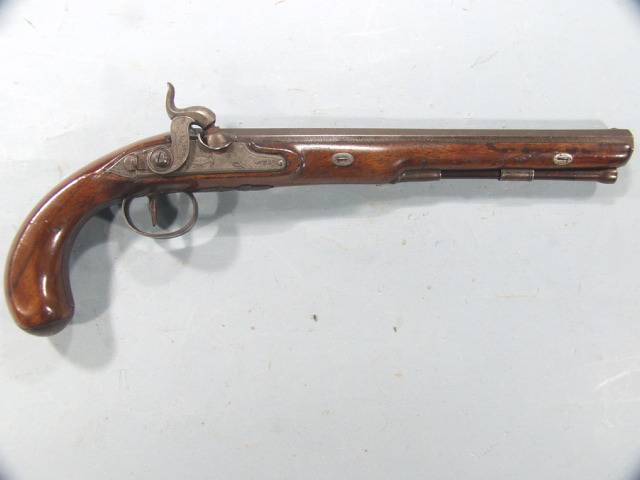 Dueling pistol by R. Wogdon, circa 1775. 11-inch barrel, 13-mm caliber. Walnut stock with burnished steel details. The original rosewood ramrod with a horn. Signature "Vogdon" on the lock and on a silver inlaid oval medallion on the barrel. The classic Wogdon dueling pistol was converted in the 1820s and converted into a capsule pistol. Wogdon was the most famous dueling pistol master of his day. Photos courtesy of Alain Daubresse www.littlegun.be
With such perfection of dueling pistols and the small distance from which it was customary to shoot (and especially in Russia), one can only wonder why duels did not end with the death of one of the participants every time.

The only possible explanation is the peculiarity of firing a flintlock pistol.

Immediately after pressing the trigger, the trigger hit the flint, there was a flash of powder on the shelf, and then some time passed (albeit very short) before the powder in the barrel ignited and the shot itself took place. All this time, it was very difficult to hold the pistol in the right direction: with a flash on the shelf, the hand involuntarily twitched, and a cloud of smoke from it usually obscured the target.

Famous masters who made dueling weapons existed in every country.

In Germany, the Küchenreitor family from Regensburg was known, which for almost two centuries perfected in the art of making pistols.

Well, France was famous for pistols made by Nicolas Boutet and, of course, Henri Le Page.

Saying "lepage" was like saying "dueling pistol." So about him, Pushkin writes:

"Lepage fatal trunks."
It is interesting that once, namely in 1829, Le Page made a dueling pair with wheel locks.

What was it? Master's whim or order? Or did he want to compete with the masters of the past? 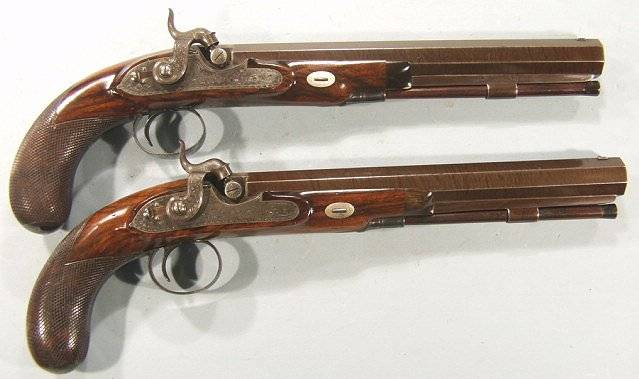 A pair of Joseph Manton pistols, circa 1814 Around 1828-1830 converted to capsule. The barrel is 10 inches long, caliber 12 mm. Details are finely engraved and blued. Polished Damascus steel barrels. Walnut grips with horn end caps. Photos courtesy of Alain Daubresse www.littlegun.be
By the way, the Le Pages family business was founded in 1743.

Until 1822, it supplied its weapons first to the royal and then to the imperial court of France.

Le Pages were renowned not only for the quality of their wares, and especially of their dueling pistols, but also for their fine finish. They were covered with exquisite tapping, inlay, carving and engraving, and delicate taste turned the most commonplace product into a work of art.

So it is not surprising that the regular clients of the House of Le Pages were persons from the high society, as well as many foreign sovereigns and very noble foreign persons. 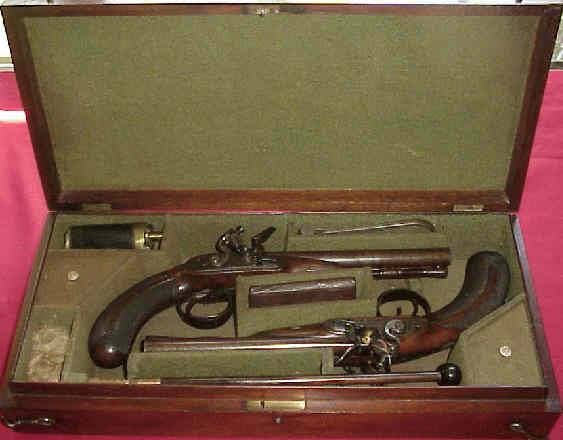 Joseph Manton's double-barreled pistol set. Photos courtesy of Alain Daubresse www.littlegun.be
By the way, it is interesting to note that the official regulations on duels appeared rather late.

For 150 years, people have used either orally transmitted rules, or copied in notebooks by hand. And in each country they were different.

And so it was until 1836, when the Parisian "Jockey Club" decided to start working on them. 76 very prominent personalities of France took part in the development, so to speak, of the official dueling code. After which it was signed by them and published in print.

Moreover, here we, as it happened more than once, unfortunately, turned out to be ahead of the whole planet by far not in the best way.

If in the West a duel was in many ways a formal ritual, then our nobility, like in France during Richelieu's time, took such fights seriously.

In Russia it was, in fact, a legalized murder. Since the minimum distance we considered was three steps, and the distance of six or eight steps was practically the norm.

In Europe, they shot at least 15 steps. And usually the distance was set at 25-30 steps.

Dueling pistol L. Omber from Marseilles. The barrel is 10 inches long, octahedral. Caliber 11 mm. A beautiful French dueling pistol with an ebony stock, a gold wire inlaid trigger and other metal details. Photos courtesy of Alain Daubresse www.littlegun.be
True, since the middle of the XNUMXth century in Europe (and even here in Russia) morals have softened.

And along with them, the dueling rules were gradually softened. Although in Russia, among the officers' environment, duels took place and quite legally took place until the beginning of the XNUMXth century. (Remember, for example, "Duel" by A. Kuprin).

But then they were already shooting from regular revolvers. And dueling pistols gradually migrated to museums.

Well, we will tell you about a couple of the most famous duels in Russia in the next two articles.