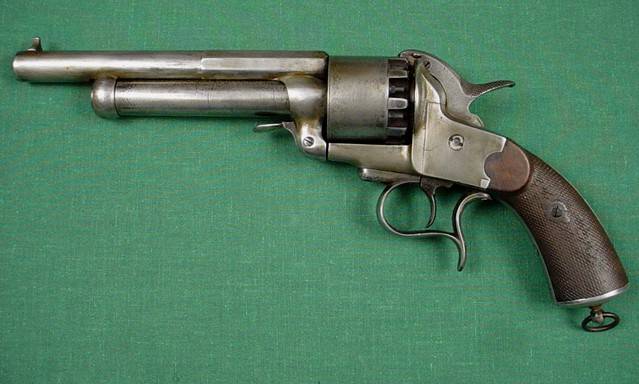 Capsule revolver Le Ma of the first model. It is easy to recognize, since its trunk is half round, and then it is octahedral. Photo courtesy of Alain Daubresse www.littlegun.be

Caliber - easy to get scared
Lose peace for good
By eye - thirteen millimeters,
More precisely - twelve and seven ...
Half an inch - make you shiver
A creature of heaven and earth,
Half an inch of everything is separated
From the death of your enemy!
Adam Lindsay Gordon
Weapon and firms. Today we will tell you the long-promised history revolver Le Ma. The revolver is very original in design and, nevertheless, would have remained, most likely, simply unnoticed, if not for the North-South civil war in the United States.

It was she who made him pay attention to him, made him popular and helped to replicate in large numbers.

During the Civil War, most of the fighting was fought at a distance of 50 to 100 yards (about 90 m), with cavalry being widely used, which had to fire at even closer range.

At the same time, the average soldier shot rather badly than well, since many of them did not even own firearms before the outbreak of hostilities. In addition, most of the soldiers had to use outdated smoothbore rifles and the same single-shot primer pistols. 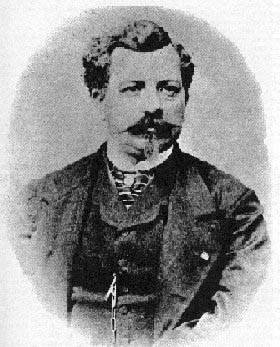 Francois Alexandre Le Ma
Therefore, when Le Ma's revolver fell into the hands of such a soldier, he would tell almost legends about it. Because for him it was an extremely high level of development of military technologies.

The Le Ma had a .42 top barrel and a nine-round drum — larger than the Colt's more or less famous revolvers at the time. And the lower smoothbore barrel of 0,63 caliber (caliber 16), loaded with large buckshot.

The shooter chose which barrel to shoot by manually setting a rotating drummer on the trigger. The weapon itself had no effect on any battle of the conflict. But it was a powerful firearm, literally radiating confidence in its power.

At close range, he had no equal in the number of charges in the drum. Not to mention the fact that a buckshot shot from a barrel was extremely dangerous for everyone who fell under it. No wonder they called him

"Revolver with a shotgun."
And, perhaps, you cannot say more precisely. 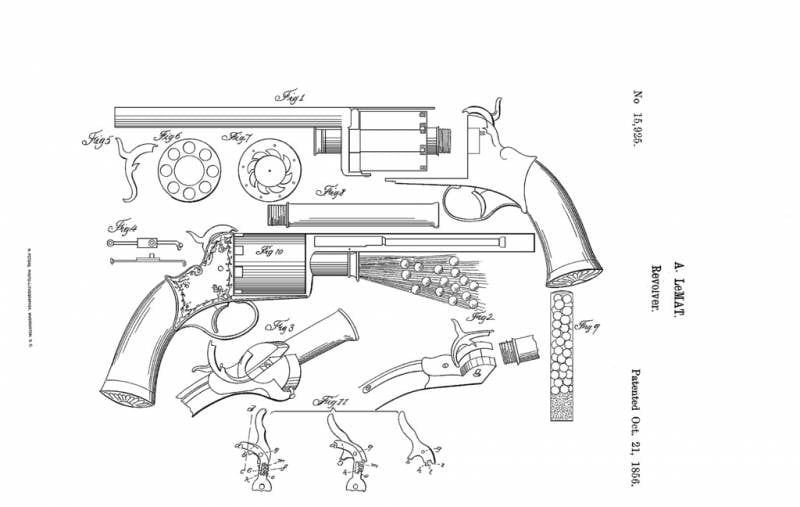 Le Ma's patent for his revolver
About 2900 revolvers of this type were produced. And about 2500 of them were in service with the Confederate army.

Due to its high cost, it was usually not given to privates. Therefore, Le Ma, being in the hands of a general or a colonel, was usually more of a status weapon than a combat one.

It was produced in 1856-1865 in France, Belgium and England. And originally had a .42 caliber and a 20-gauge smoothbore barrel for grapeshot shooting. At the end of the Civil War, a lighter .35 or .36 caliber version with a 28 caliber buckshot barrel appeared.

It was believed that there was no point in shooting beyond 25 yards from Le Ma. However, he was preferred by the famous cavalryman JB Stewart. And he was prized by southerner generals such as Braxton Bragg, Richard H. Anderson, and Major Henry Wirtz. 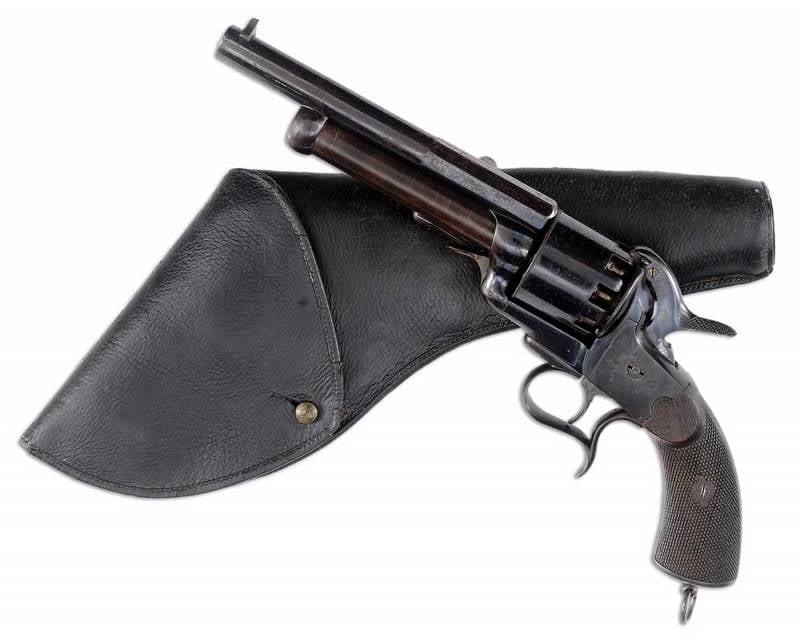 He was born in Bordeaux on April 15, 1821, at nine o'clock in the morning. And his parents Jean and Jeanne (née Pommeuse) were bakers.

François studied at the theological seminary in the same place in Bordeaux and was preparing to become a priest. But medicine interested him much more. So he ended up becoming an intern at the Saint-André hospital. In 1840, he took the Hippocratic Oath at the Faculty of Montpellier and became an assistant surgeon at a military hospital in Bordeaux. Then he retired on November 12, 1843 and went to America, to New Orleans, where he wished to study the infectious diseases common there. The young French doctor in Louisiana was not doing well. Moreover, he received permission to practice from the medical committee of New Orleans only on April 28, 1849. 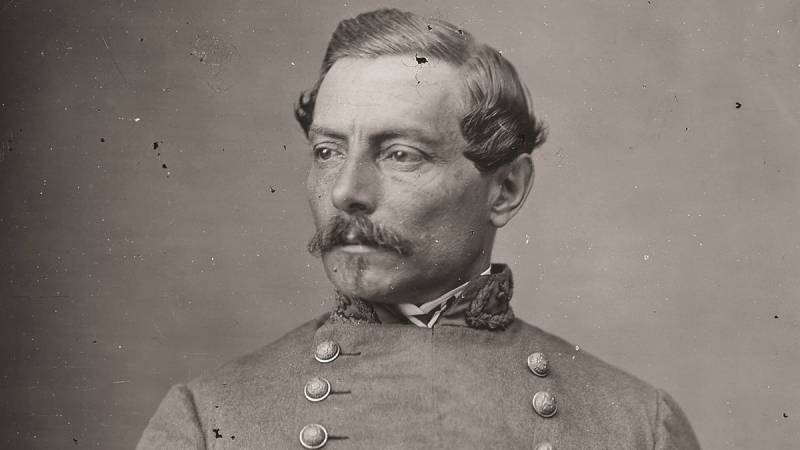 General Pierre Gustave Tonand Beauregard
True, he then became the head physician of the Sagrada Familia hospice and received a rich clientele in his private practice.

And then he further consolidated his position in good Louisiana society by marrying Justine Sophie Lepretre, a native of New Orleans and grand-niece of the Marquis Sebastian Lespretre, better known as Vauban (1633-1707). Yes, the same one - Marshal of France and General Commissioner of the fortifications of King Louis XIV.

By this marriage, Le Ma also linked himself with the Beauregard family. 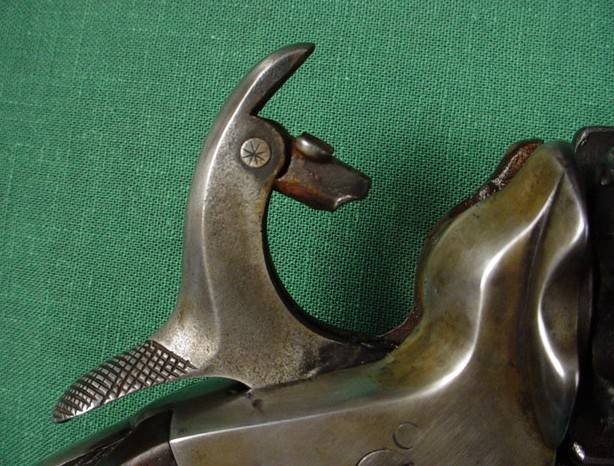 The trigger of the Le Ma revolver of the first model. Photo courtesy of Alain Daubresse www.littlegun.be
Le Ma was distinguished by a penchant for invention, and in many areas. First of all, in the field of medicine, where he received a medal at the World Exhibition in London in 1862 for the surgical instrument he developed.

He also received several patents in the field of weapons, with one in 1859 for an automatic bolt for field guns. 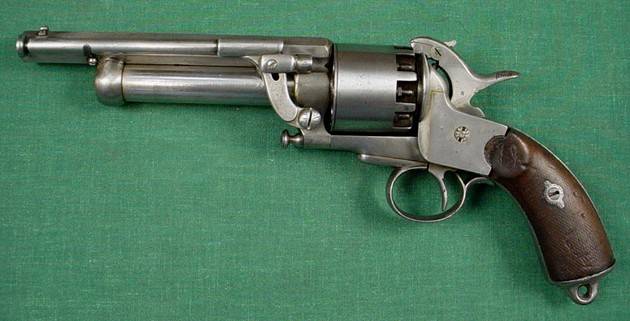 The second model of the La Ma revolver, reduced caliber. The lever for tightly driving the bullet into the drum is clearly visible. The ramrod was inside the lever for tight bullet driving. Photo courtesy of Alain Daubresse www.littlegun.be
Well, Beauregard, then a major in the US Army, decided to help a relative with his promotion in the army.

As a result, the revolver was presented to the army commission and fleet in New Orleans and she gave it a positive rating. Nevertheless, the army was in no hurry to buy it, and the partners did not have the money to produce the novelty on their own. 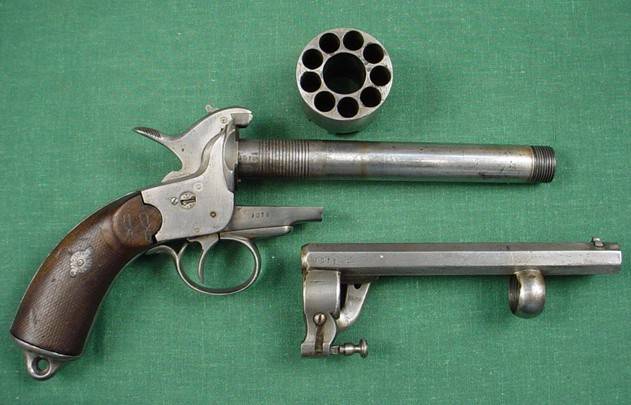 Disassembled revolver (2nd model). Faceted barrel. Photo courtesy of Alain Daubresse www.littlegun.be
In February 1861, Le Ma's cousin, who had by this time been promoted to Colonel of the US Army, attended the proclamation of the Confederate States of America with Beauregard in Montgomery, Alabama.

Taking the opportunity, he immediately signed two major contracts with the southern government for his brother: the navy ordered 3000 revolvers, and the army 5000.

By the way, on the morning of April 12, 1861, when the war began, the lighting and incendiary shells of the Le Ma system were the first to fly at the northerners. And fired from Beauregard's cannons. 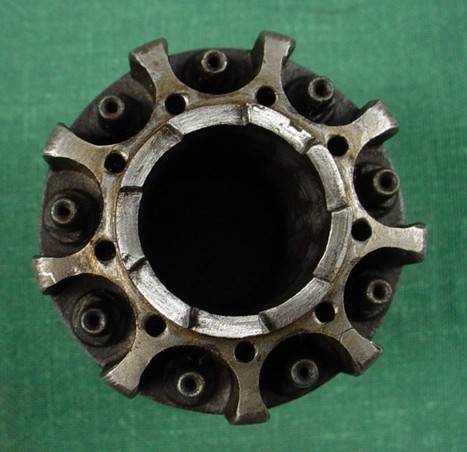 The rear of the drum of Le Ma's capsule revolver. Photo courtesy of Alain Daubresse www.littlegun.be
Appointed as an agent of the War Department, Colonel Le Ma made numerous trips to Europe, Belgium, France and England to purchase weapons and ammunition. And in addition, he placed orders for revolvers in Europe, where they were produced until 1865. 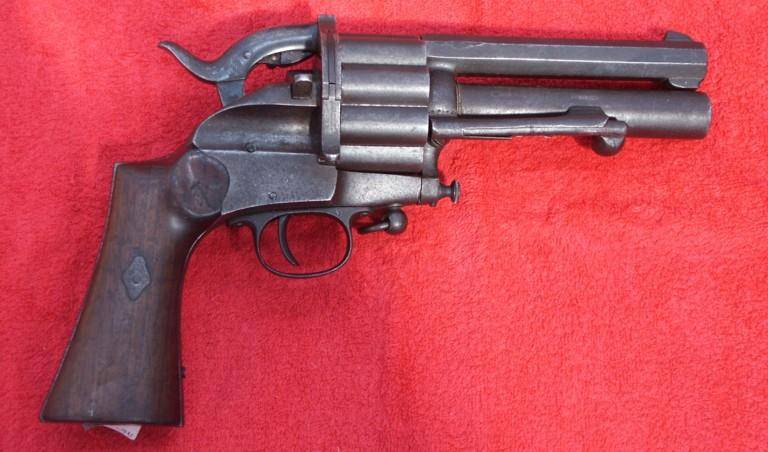 Revolver Le Ma of the third model chambered for centerfire. Photo courtesy of Alain Daubresse www.littlegun.be
Interestingly, his revolver cost $ 35. That is, more than twice the price of the Colt (and almost three times the monthly wage of a private), which made it inaccessible to the lower ranks.

It is believed that approximately 900 revolvers were sent to the Confederate army and 600 to its navy through Bermuda to avoid a naval blockade.

It is also assumed that out of almost 2900 manufactured revolvers, 2500, despite the blockade of the Union, still ended up in the South, where they entered service with the Confederate army. 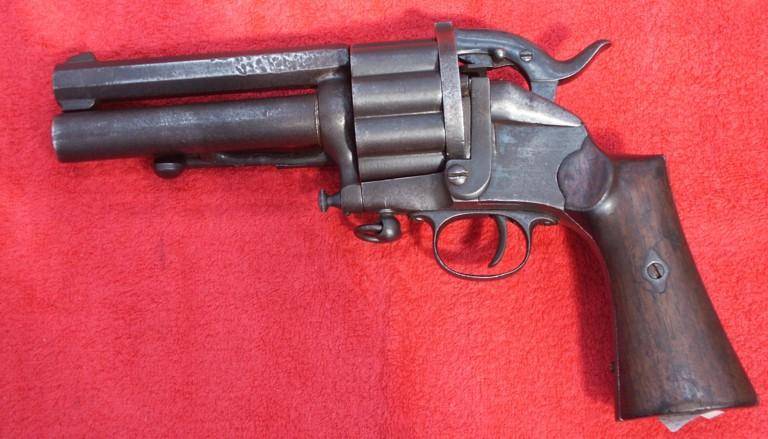 Revolver Le Ma of the third model chambered for centerfire. The bolt device of the central barrel is clearly visible. Photo courtesy of Alain Daubresse www.littlegun.be
There are three known modifications of this revolver, which were then produced sequentially. The first is the traditional capsule revolver. And in it, a nine-charge drum rotated on an axis, which was used as a barrel of a larger caliber, and its ignition was also primer. 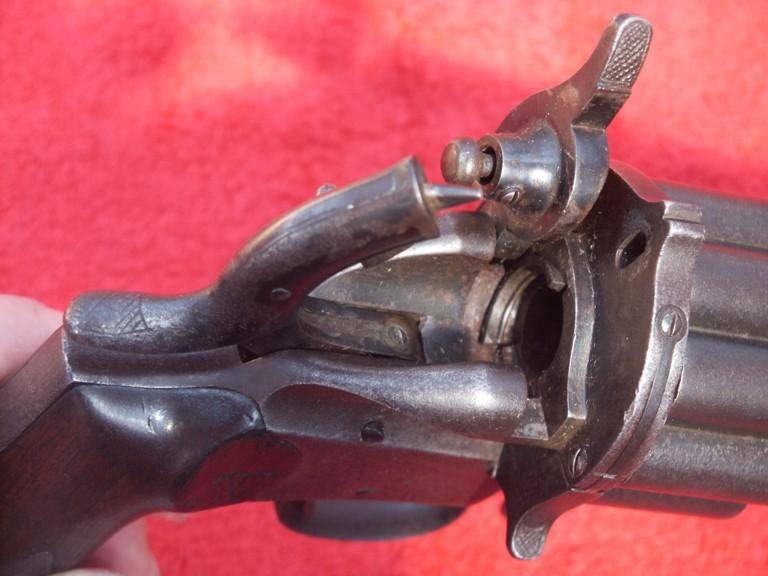 Two strikers on the trigger. Photo courtesy of Alain Daubresse www.littlegun.be
A hinged ramrod (mounted on the right side of the body) could be used to charge both barrels.

Later (during the American Civil War), a lighter .36 caliber version with a second .55 caliber (28 caliber) barrel was produced.

But, since at that time it was non-standard ammunition, the owners of the revolver had to cast bullets for them and glue the cartridges themselves, and not receive them from military warehouses. Which was, of course, inconvenient.

The latest Le Ma models were available in either .36 or .44 calibers. Apparently, in response to the desire to have standard ammunition for it. However, too few of them managed to overcome the blockade by the Union for them to have any real use in the army of the South.

The tactical and technical characteristics of the revolver were as follows: 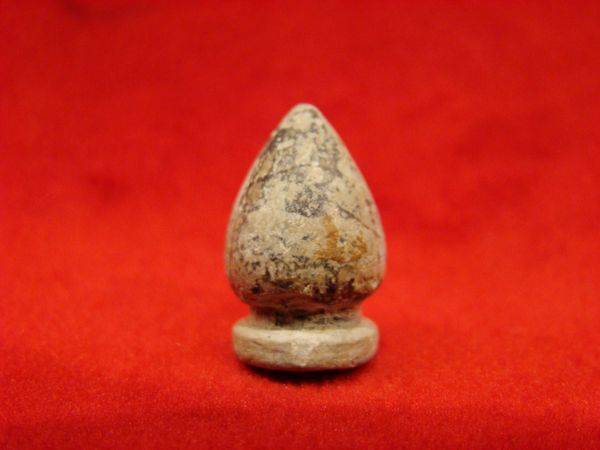 Bullet of Le Ma's revolver. Photo courtesy of Alain Daubresse www.littlegun.be
Interestingly, General Beauregard's personal engraved revolver Le Ma, which he carried with him throughout the war, has survived to our time. And it is now in the Confederate Museum in Richmond, Virginia. 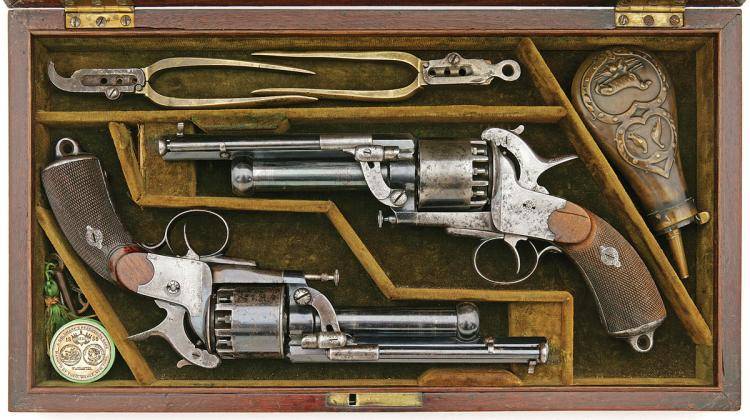 Set of two Le Ma revolvers with accessories. Photo courtesy of Alain Daubresse www.littlegun.be
After the advent of firearms that shoot cartridges, a model of this revolver appeared, in which cartridges were loaded into the drum. But the central barrel still had the ignition of the charge from the primer.

In later years, Belgium produced a 12 mm version chambered for Perrin or 11 mm Chamelo-Delvin and with a smooth 24 caliber barrel. This model sold better than the previous ones. However, she did not wait for real commercial success either.

In 1868-1871. about 200 Le Ma carbines were fired for centerfire cartridges with a hammer switch on the trigger. The caliber of the revolving barrel was .44, and the shot was chambered for the short 20-caliber cartridge. The Le Ma "Vacheri" carbine was at one time a fashionable high-class weapon. And it was not intended for mass production. Each carabiner came in a polished pecan box with an Oak Valley plantation on the lid. And it was accompanied by a certificate of authenticity signed by Le Ma himself. In addition, many owners paid lavishly for custom engraved models. Photo by Rock Island Auction Company
After the civil war, Dr. Jean François Alexandre Le Ma decided to return to his native France.

There he continued to improve the design of his revolver.

At the same time, he thought about creating a carbine on its basis, but already chambered for centerfire.

Nevertheless, Le Ma was engaged in military construction for a long time.