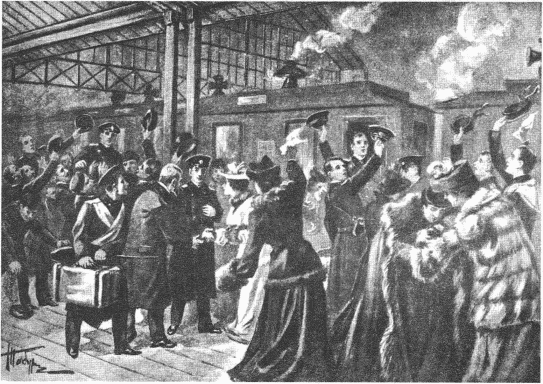 The first letter to his wife Olga Nikolaevna Antipova is dated 4 September 1904 years from Reval (Tallinn).

“In Revel, the week passed unnoticed, but it cannot be said that it was very successful: constant breakdowns of cars, electric motors, disturbances on ships and the often choppy sea interfere with learning much that was planned ...

Our position is very bad and will not get better. The Japanese will give you more than we are able to ...

One governor Alekseev raised his head, who took, he says, appointing independent leaders: the army and fleet.

Now I step into my rights and ask you to explain to me exactly how you intend to get out of the situation you have created. Where is your squadron - what is it?

Don't move until I give my thoughts and orders. "
The admiral describes two problems - technology and dual power.

The technique does not allow to fulfill the plan of the exercises in its base. And instructions from several instances do not allow you to act according to your plan.

Teachings (I will humbly note) were. If you look not only at letters - and firing (artillery and torpedo), and maneuvering.

“I will be whole, you will pay for all the insults. And I will gladly accept your apology

but I will go for a walk where Makar did not drive calves - the road is a tablecloth;

I am of little use now;

and I myself am completely at peace for you, and for Lelya, and for all my loved ones ...

Even though we are still completely peasants, it is impossible to learn a lot neither in Revel, nor in Lyubava, anywhere else in the Gulf of Finland ...

Yes, and we missed all the best times for the passage of bad places.

If they left on September 1, then in wonderful weather they would have reached the southern latitudes by this time. "
I remember Bukhvostov's words:

"We will all die, but we will not surrender."
The assessment is sober - preparation is weak, the weather will not allow further studies, a hike through Biscay in October is really dangerous ...

All the people in the squadron understood. They understood, but they went.

Because - an oath and a duty.

Another question is that one cannot expect success with such and such moods. But the problem was far from mood.

“Every day there are minor breakdowns, even during stops, what can we expect on the way, and even in October weather, which came into their own here.

They see us off very kindly.

The more shameful the failure will be. "
And about the same - there is no chance.

Separately about the Hull incident in a letter from 15 October:

“The British either set up the incident, or are dragged into the situation by the Japanese from which there is no easy way out.

Without a doubt, the Anglo-Japanese alliance provides for armed assistance when needed.

The need has obviously arrived.

And the pretext is the most correct, from their point of view. "
The opinion is biased, but well-founded.

The commander saw the situation through the eyes of the Foreign Ministry and intelligence.

But what these organizations saw was a matter of serious research. On the topic of what it was: sabotage, corruption, or impenetrable stupidity?

“We have become weak everything is at the root, and with such general painful weakness the extravagant enterprise of our renowned 2nd squadron it's hard to count on chance even.

and now we will crawl on ships that are capable of moving in calm weather no further than 1500 miles;

we will puzzle over how to step over stations with them in 2000 and 2300 miles long. "
Highlighted would be in stone and on walls.

And, by the way, about coal transshipments.

Well, that's why they filled all the premises with coal? Why?

“I have thirteen ships in service.

At night, this herd is sometimes crowded, running over each other, so that there is a danger of collision, then it stretches so that you are afraid of losing some sheep.

Breakdowns happen on everyone. "
And again the technical condition.

Well, and a complete inability to keep the formation, which, given the lack of sailing and different maneuverable characteristics, in fact, is not surprising.

Two questions run like a red thread through all the letters - breakdowns and intelligence reports that the Japanese are literally around the corner.

Next letter at the end of November and again:

“The machines of our ships, meanwhile, wear out and break down daily, now at one, now at another.

And you cannot enter any port, not only for repairs, but also for the bulkhead of cars.

And this is with a squadron, which, including transports and destroyers, recruits up to 50 ships and 12 people. "
From Madagascar, the admiral answers why around Africa, and not the Suez Canal:

“Of course, they will say: the fool was free to choose a roundabout way - deliberately delaying the voyage.

And these will lie.

Because half of them were sent by the shortest route, and they also did not stand anywhere else, but should come and, I hope, will come to the connection only three days before me.

And this half could not have come so soon if it had to wait for the passage of my large detachment by the Suez Canal, from which every ship before entering the canal should have completely unloaded, and after the passage again be loaded.

They will say that I chose the point of connection of the detachments aside from the direct path in order to prolong the voyage.

And they will also lie, because on the straight path there is not a single hole where you can stick yourself: everything is English;

but the British can't rub their glasses: they will prevent the squadrons from stopping in their waters by force. "
And adds:

“After all, the sailors even wrote that the passage of the squadron from Kronstadt to Port Arthur takes sixty days, and when I first said six months, they goggled.

But we have been going for the third month and have not made another half of the way. "
Separately about the parking in Nossibeisk: 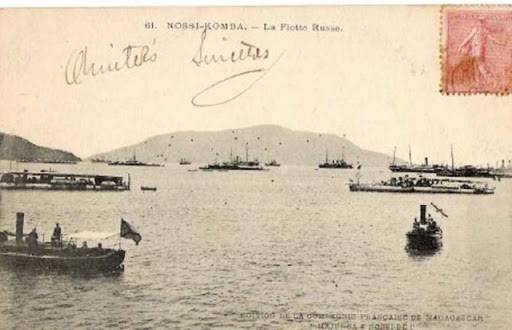 «7 January... The Germans changed at the most decisive moment ...

I don’t know how to get out, especially with Fyodor Karlovich, whom the chancellery ate completely ...

And for us any delay here is disastrous; it allows the Japanese to make extensive preparations.

We ourselves find ourselves in a period of hurricanes, which can destroy half of our ships without any participation of the Japanese.

An evil fate hangs over the Russian fleet.

Do not get in the way of our Headquarters, our diplomatic offices were not in a panic mood, do not shout like that at all crossroads ... ten days ago we would have set off on a further journey.

I don't know what will happen next, but now the matter is shameful ...

He sent the most energetic appeals to Petersburg.

Will they not move?

But even if they do move, the answer here to the telegrams will have to wait ten days.

And now everyone is so terribly dear ...

17 January... I was supposed to be on the other side of the Indian Ocean on your birthday, and the damned office is holding it. And I don't know how long it will last ...

The prohibition on me to move on until the orders, sent by the Highest command ...

Yet I now have no matter what strength, people know each other.

We may not defeat the Japanese, but they also cannot defeat us.

Why is all this ruining? "
Summary.

The squadron, which could slip through in February - early March, was detained by the highest order. And she came in May.

We got Tsushima, of which Zinovy ​​is guilty, of course. Not the author of the highest command.

Judging by the letters, six months of the transition is March, with luck - February.

At this time it was quite possible to slip through without a battle.

In fact, with Rozhestvensky, the St. Petersburg team acted like cheaters - they changed the rules during the game.

The "love" of Zinovy ​​for Clado is also interesting:

“Can it be that poor Klado has mixed up the Petersburg brains?

Is it really not clear to them that the more numerous the rabble of any bastard, the more impossible it is for them to cope, the more chances are to beat this bastard in parts where these parts will fall off due to various troubles ...

Obviously, I need to be replaced, especially since as the chief chief. pestilence. headquarters, I turned out to be worthless, did not make acquaintance with pikes. And at their behest, he did not prepare for dispatch all those unprepared and outlived ships, of which a simple captain of the 2nd rank Klado finds it possible to form a third squadron in a few weeks.

Since my sin will be corrected, and Klado is right, of course, there is no need to endure my fictitious service any longer in the main naval headquarters.
The articles of which, it seems to me, aroused only anger and malice in Zinovy, like any professional's opinion of an amateur.

Nevertheless, the emperor listened to the opinion of the journalist Klado, and not the commander.

And, I think, in connection with this, the following letter:

“Maybe one of these days you will hear at my address - a scoundrel and a scoundrel.

Don't really believe it, tell them that I am neither one nor the other, but just a person who does not have the necessary data to cope with the task.

I even think that God forbid what happens to me, the rest of my admirals will cope with this task even worse, and I ask you to send Chukhnin in advance, so that, what good, do not leave the squadron in a stateless state. "
All these heroes of alternative descriptions of RYAV on the topic

"What would happen if a genius was at the head"
- The Skrydlovs, Dubasovs, Chukhnins never arrived at the squadron.

All the same people led her into battle - Rozhdestvensky, who was desperate from misunderstanding, the sick Felkzerzam, and the ex-mayor Enquist.

There were no other willing admirals among dozens of admirals.

And one last before the battle:

"Yes, whatever the events of the coming days, the end result is nothing but a new page of Russia's shame."
April 16 1905 years.

The letters were written not for the prosecutor, not for colleagues, his beloved (judging by his tone) wife. And nobody would be cunning in such papers.

What do we see?

There was a plan - to slip through in bad weather, while the Japanese put the fleet in order in Vladivostok.

The plan was thwarted.

There was a suggestion:

"I cannot defeat the Japanese (and no one could) - change it."
Have not changed.

As a result - Tsushima, of which, of course, a mediocrity is guilty. Not a system.

The blockhead offered to hold a trump card for negotiations in the theater of operations. He was not given.

The fool was in a hurry. And geniuses (like Clado and the emperor himself) slowed down.

The dumbass shouted - we will lose the battle. They didn't listen to him ...

There were definitely geniuses upstairs. Where are the sailors ...

It's nothing you can do. Is in our stories heroic figures. And there are tragic persons, with which the leaders covered their sins and sins.

Zinovy ​​stands out against the general background.

Exactly he was made the ideal scapegoat for the bureaucracy and the complete military-political failure of the government.