Friendship for money: foreign ships and boats for the Ukrainian Navy 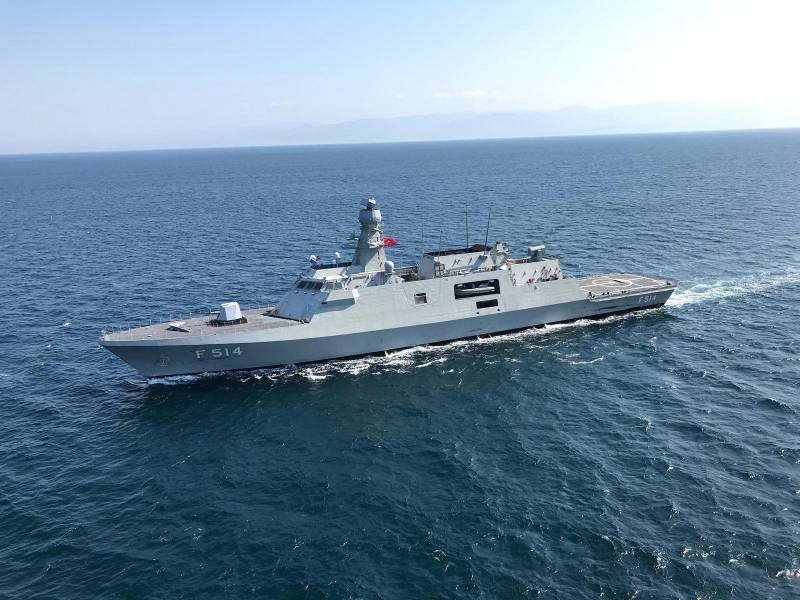 Corvette F514 Kınalıada of the Ada type from the Turkish Navy. Photo by the Ministry of Defense of Turkey

The current state of the naval forces of Ukraine, like the entire army, leaves much to be desired. To change the situation, it is planned to purchase several dozen foreign-made combat units - of all main classes, from motor boats to corvettes. However, it is not known whether it will be possible to carry out such plans and change the state of affairs.

In recent months, there has been a rapprochement between Kiev and Ankara, leading to interesting results. So, in mid-December, a Ukrainian-Turkish contract was signed for the construction of five Ada-type corvettes - a variant of the MILGEM project. According to unofficial data, the contract value exceeded USD 1 billion, i.e. at least 200 million per ship.

The laying of the head corvette is expected this year. It will probably be built by the Istanbul Naval Shipyard, which has already supplied MILGEM ships to the Turkish the fleet... The finished corvette will be handed over to the customer no later than 2024. It is planned to involve the Okean plant (Nikolaev) in the work under the contract. In the future, he will participate in the construction and retrofitting of ships.

The exact technical appearance of the Ada ships for the Ukrainian Navy has not yet been disclosed. Obviously, the corvettes will retain their standard hull, superstructure, power plant and general ship systems. At the same time, rearmament is possible with the use of complexes available to the Ukrainian Navy - its own or foreign production. 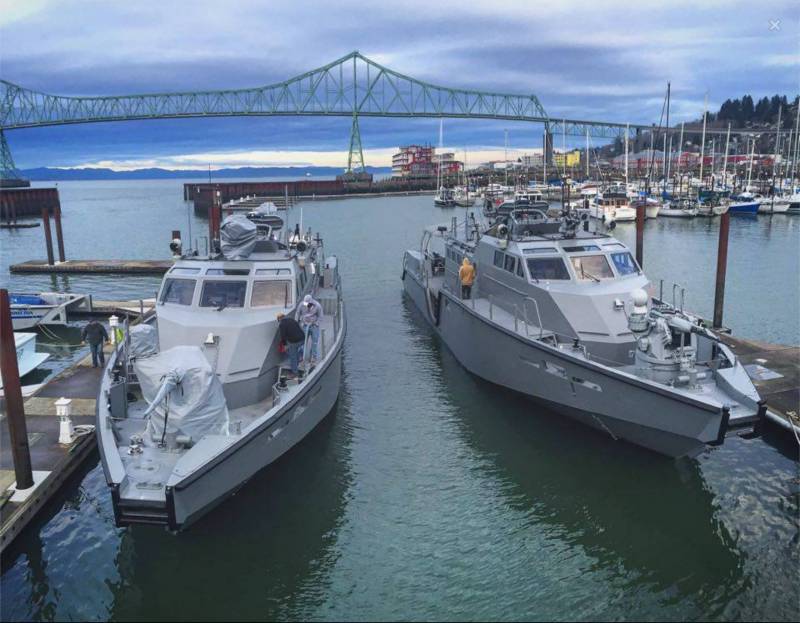 A pair of Mk VI boats, previously built for the US Navy. Photo by SAFE Boats Int.

The Ukrainian army receives material assistance from the United States, and these processes will continue in the future. On the last day of 2020, the Pentagon ordered the American company SAFE Boats International to prepare for the construction of the first two Mk VI boats. Then the assembly is expected to start, and in 2022 two hulls will be transferred to the Ukrainian Navy.

The current plans of the Pentagon and Kiev include the construction of 16 Mk VI boats, as well as crew training and subsequent technical assistance. The United States allocates approx. $ 220 million, which will be spent on the construction of six new boats. The remaining 10 units. it is proposed to build in the USA at a Ukrainian expense. The total cost of the series is $ 600 million.

Most likely, the Mk VI boats for the Ukrainian Navy will generally retain their standard appearance. In this case, rearmament is possible. 12 boats of the American Navy are equipped with a pair of installations with 25-mm cannons and a set of machine guns of normal and large caliber. Most likely, the "Ukrainian" Mk VI will receive a rifle weapon Soviet development.

In October last year, Ukraine and the UK signed a memorandum on strengthening military cooperation. Among other things, this document provides for joint efforts in the modernization of the Ukrainian fleet. Thus, the British side provides Ukraine with a loan of 1,25 billion pounds for a period of 10 years. 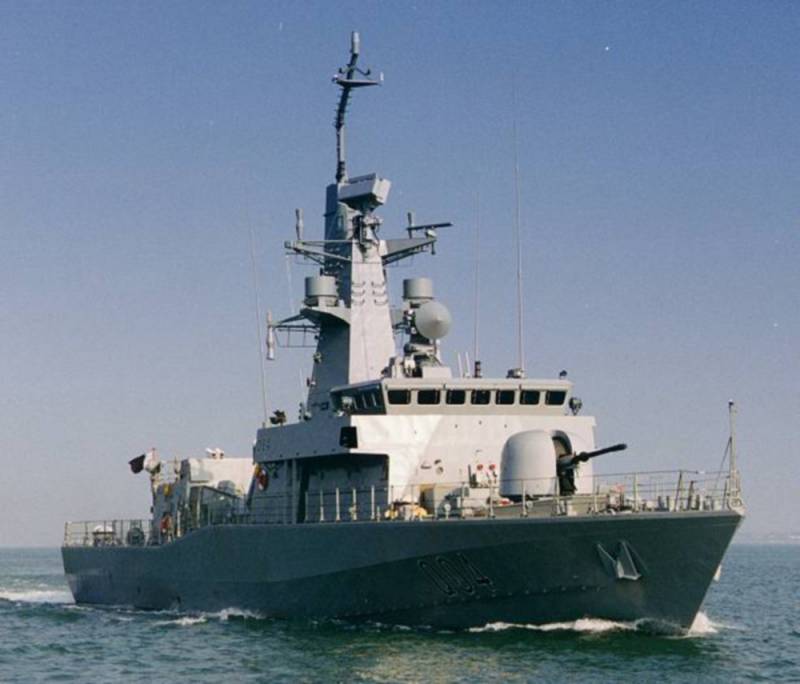 Missile boat Q04 Barzan of the Super Vita class from the Qatar Navy. Photo BAE Systems
This money will be used to build eight large Super Vita-class missile boats from one of the BAE Systems divisions. The first two boats for this order will be built at a British shipyard. The remaining six with the help of foreign colleagues will build the Nibulon plant in Nikolaev. The specifics of international cooperation and organization of construction have not yet been disclosed.

According to reports, the Super Vita boats will retain their standard appearance and equipment that meets NATO standards. In the early stages, their main armament will remain the Norwegian NSM anti-ship missiles. In the future, the possibility of modernizing boats with the installation of Ukrainian products "Neptune" is not excluded. However, the ship version of such a rocket is not yet available, and the timing of its appearance is unknown.

For the Coast Guard

In the context of the construction of foreign equipment, it is necessary to recall the recent Ukrainian-French agreement on the joint production of 20 OSEA FPB-98 Mk 1 patrol boats for the Coast Guard. The contract was concluded in July last year, and then the laying of the head building took place.

Under the terms of the agreement, the OCEA-Nibulon joint venture will build the first five boats in Ukraine, and the remaining order will be fulfilled by a French shipyard. Three years are allocated for the construction of five boats in Nikolaev. The construction will cost 136,5 million euros. 85% of this amount as a loan is provided by commercial and government structures in France.

Bold plans for FPB-98 boats. Graphics of the Ministry of Internal Affairs of Ukraine
According to the plans, Ukraine's SOBR will receive two dozen FPB-98 boats in the basic configuration. Changes can only affect certain items of equipment and weapons.

Corvettes and boats of various types are still in plans for the future, although the construction of some hulls has already begun. In anticipation of such pennants, the Ukrainian Navy is accepting more modest assistance from foreign partners. So, on February 10 in Odessa, the acceptance of another batch of American-made motor boats took place - more than 80 units.

The United States transferred 10 Willard Sea Force series rigid-hull inflatable boats, as well as over 70 Zodiac boats to the Ukrainian fleet. The resulting products have a power plant and other equipment, but do not carry weapons. Perhaps it will appear later. Also, Ukraine received a variety of equipment and equipment for special forces.

Ukraine is trying to build new corps for the naval forces, and also concludes contracts with other countries. The restoration and modernization of the fleet is impossible without such measures. However, the existing plans of the command look, at least, ambiguous or even dubious. 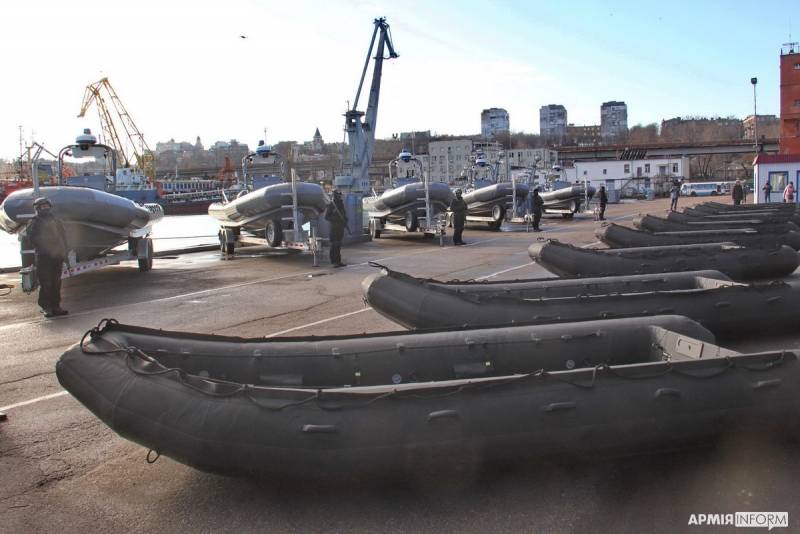 New American boats for the Ukrainian Navy, February 10, 2021. Photo by the Ministry of Defense of Ukraine
It is obvious that there is no clear-cut plan for renewing the surface forces. Order plans are mainly determined by two factors - politics and finance. The current Kiev authorities are trying to be friends with the United States, and contracts appear for American equipment, moreover, not for the most expensive and complex ones. The course of friendship with Turkey leads to the appearance of the agreement for the Ada corvettes.

The Ukrainian-Turkish agreement for five corvettes should be considered separately. The total cost of the ships, without weapons, exceeds $ 1 billion. There is every reason to doubt that Ukraine will be able to find that kind of money and fully pay for the construction. In addition, the total cost of the program will be higher because the ships have to be re-equipped.

The situation with British missile and French patrol boats is, at first glance, easier. Great Britain and France provide their Ukrainian partners with large loans that cover at least most of the construction. However, the loan must be paid, and with interest. Ukraine's ability to repay loans under certain conditions is questionable.

The situation with the supply of American boats and boats looks a little simpler. These products are partly funded by the United States as military aid. However, in the case of Mk VI boats, most of the order will be paid by Ukraine from its own funds - 10 units. out of 16.

Thus, a specific situation arises. The plans drawn up, which have already taken the form of real contracts, can really lead to a significant update of the Ukrainian Navy and increase their capabilities. However, their implementation will become an excessive burden on the military budget - and on the entire economy of the country, which cannot boast of any particular success. 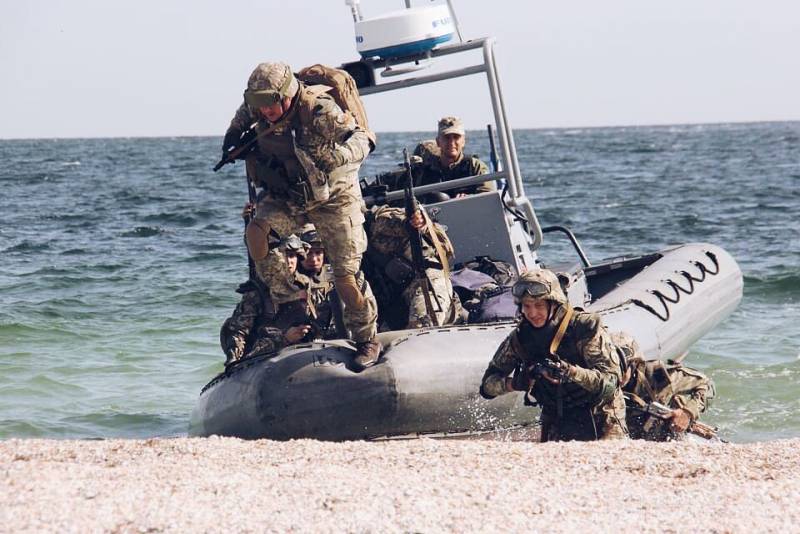 A foreign motor boat at a military exercise. Photo of the Ministry of Defense of Ukraine
On the other hand, foreign partners find themselves in a favorable position, who have to fulfill Ukrainian contracts. They get the opportunity to load their production facilities with new orders and make good money on a friendly country. Even the need to issue loans or partial payment for projects does not stop foreign states.

All these processes perfectly demonstrate the current situation in the international arena. Ukraine wants to be friends with developed states and is ready for certain steps and measures. Foreign countries are not against such cooperation, but only if it gives them any benefits. In the case of the construction of boats and ships for Ukraine, we are talking about making money on the production of equipment and on loans.

Ukraine's limited economic potential will make it difficult to build new combat units. However, Kiev cannot but pay for orders, and their reduction is also not possible. The specific features of the Ukrainian economy and foreign policy suggest that the shipbuilding program will be paid for - although for this one will have to sacrifice something else. Time will tell how the situation will develop in the future. But there are no reasons for optimistic forecasts.

Ctrl Enter
Noticed oshЫbku Highlight text and press. Ctrl + Enter
We are
On the comparative value of Russian and American warships, or Arly Burke against our corvettes"Svetlana". History of creation
Military Reviewin Yandex News
Military Reviewin Google News
33 comments
Information
Dear reader, to leave comments on the publication, you must sign in.