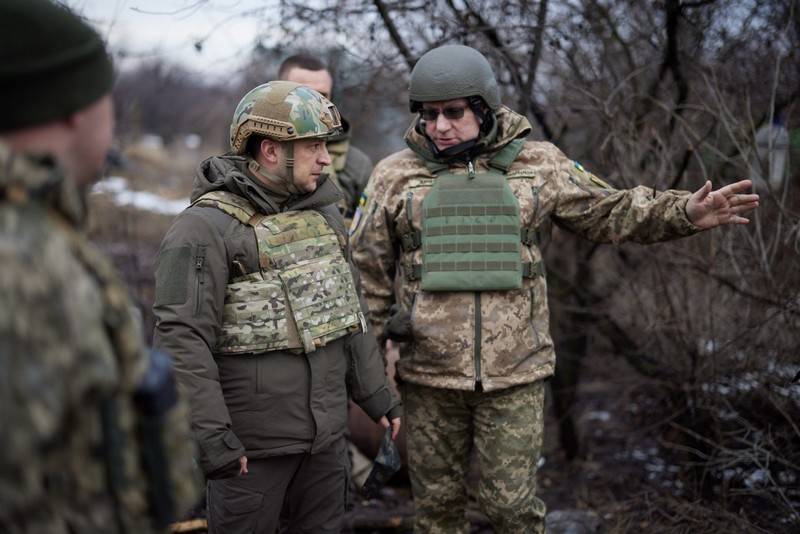 Ukrainian President Volodymyr Zelensky has accused Donetsk and Lugansk of seeking to disrupt the ceasefire in Donbass. The corresponding statement was posted on the official website of the head of the Ukrainian state.


According to Zelensky, only Ukraine is interested in a truce, therefore, the servicemen of the Armed Forces of Ukraine never open fire first, but only respond to the shelling of the enemy. The self-proclaimed republics take advantage of this, breaking the ceasefire regime and blaming Kiev for this.

(...) only Kiev is interested in observing the ceasefire, so the country's armed forces will not receive a direct order to attack enemy positions. (...) They answer exactly as you need to answer in this situation
- declared Zelensky.

On the eve, the office of the Ukrainian president said that Zelensky, accompanied by the ambassadors of the GXNUMX countries, went to the Donetsk region in order to "get acquainted with the situation on the front line" and talk with the military personnel in the Joint Forces Operation zone. Earlier, he instructed to check the readiness of units of the Armed Forces of Ukraine to perform tasks in the JFO zone.

In turn, the intelligence of the NM DNR reported that the military personnel of the Armed Forces of Ukraine were mining roads on the contact line. It is reported about the installation of anti-tank mines in the area of ​​the village of Pishchevik, the village of Shirokino, Zaitsevo Severnoye and the settlement of Peski.

In the area of ​​responsibility of the LPR, the deployment of heavy armored vehicles of the Armed Forces of Ukraine, including Tanks.

The republics note that lately the situation on the line of demarcation has become more and more tense, preparation of the Armed Forces of Ukraine for an offensive or armed provocations is not ruled out.

Ctrl Enter
Noticed oshЫbku Highlight text and press. Ctrl + Enter
We are
Summary of the week from voenkor Mag about events in the DNI and LC 21.04.18 - 27.04.18Summary of events in the DPR and LPR for 14.04.18 - 20.04.18 from the military commissar "Mag"
Military Reviewin Yandex News
Military Reviewin Google News
58 comments
Information
Dear reader, to leave comments on the publication, you must sign in.