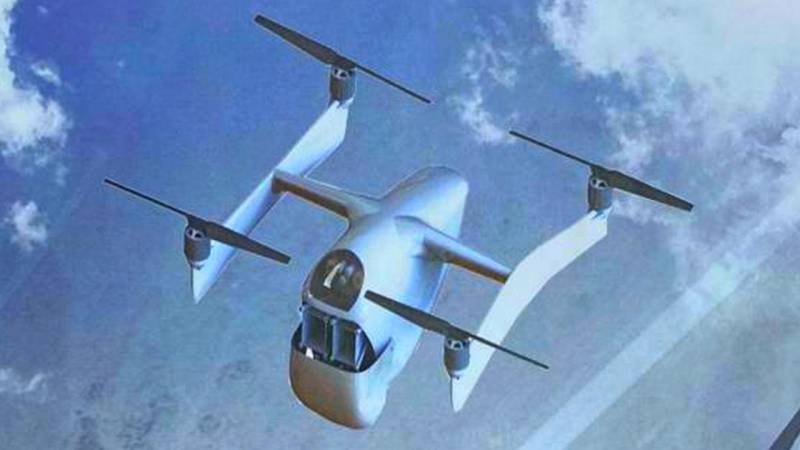 "Wolf-18" in flight, the launcher compartment is open. graphics "Almaz-Antey"

In 2019, the Russian industry presented the first domestic unmanned aerial vehicle of a helicopter type, designed to intercept small targets. According to the latest reports, the Wolf-18 interceptor drone has successfully completed flight and "combat" tests, and preparations are now underway for new tests. Based on the results of future state tests, the real prospects of this development will be determined.

Exhibit at the exhibition

The Wolf-18 project is being developed by Prom Composite and NPO Almaz from the Almaz-Antey VKO Concern. The finished sample was first demonstrated at the Army-2019 forum. Then some characteristics and main features of the product were revealed. No test successes were reported.

The other day Moscow hosted the National Exhibition and Forum of Civil Infrastructure aviation NAIS-2021. At this event, "Almaz-Antey" first showed the UAV "Wolf-18" modified version. Updated product specifications were announced, and in addition, important news about the progress of the project.

The developers claim that the interceptor drone has recently passed flight tests. All the features of the product's operation in the air were checked. In addition, Volk-18 carried out a test interception of small UAVs. Already this year, it is planned to conduct state tests, which will determine the future of the new development.

"Volk-18" is a helicopter-type UAV with four propeller-driven groups. The appearance of the product is determined in accordance with the tasks to be solved and taking into account a specific set of units. As the project developed, the exterior of the drone did not change, but the internal units underwent a major update. In addition, new control principles have been developed and implemented to simplify the use of the interceptor. 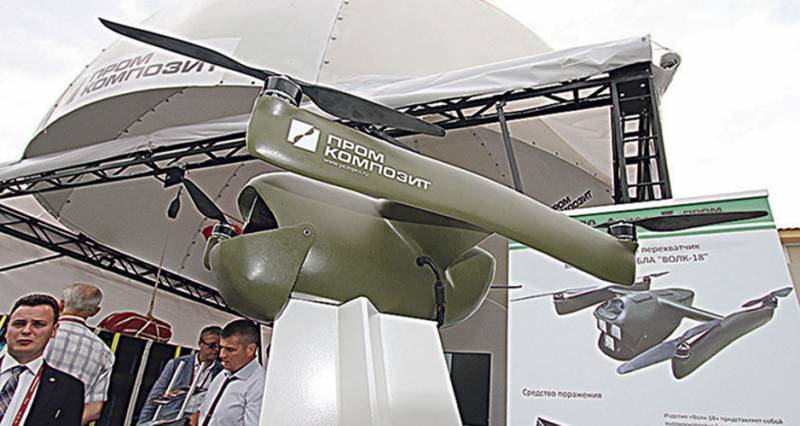 The first version of the interceptor at the Army-2019 exhibition. Photo Vpk-news.ru
A promising UAV is made in a carbon-fiber housing of a complex shape. A volumetric fuselage is provided to accommodate controls, batteries and "weapons". Four rotor groups are mounted on two T-shaped units. Electric motors with a peak power of 550 W with two-blade propellers with a diameter of 400 mm are used.

The length and width of the product without screws does not exceed 600 mm, the height is 400 mm. Takeoff weight - 6 kg, of which 2 kg of payload. The battery charge is enough for 30 minutes of flight with patrol and target interception.

A transparent fairing is provided in the nose of the fuselage, under which several optoelectronic devices are located. In the course of a recent upgrade, new optical devices with improved performance have been introduced. Provided an overview in the sector 20x25 degrees. The onboard electronics provides a video signal to the operator console.

The modernized "Volk-18" received a new control system, which allows it to work both by commands from the console and in automatic mode. The latter allows the drone to independently go into a given area, conduct observation and identify targets, as well as aim at them and intercept them. In this case, the operator has only the decision to attack.

There is a hinged cover for the weapons compartment under the nose fairing. Below it there are three devices for launching grids. Shooting is carried out by the operator's commands or automatically, but with his permission. In case the ammunition is used up, it is possible to ram the target. 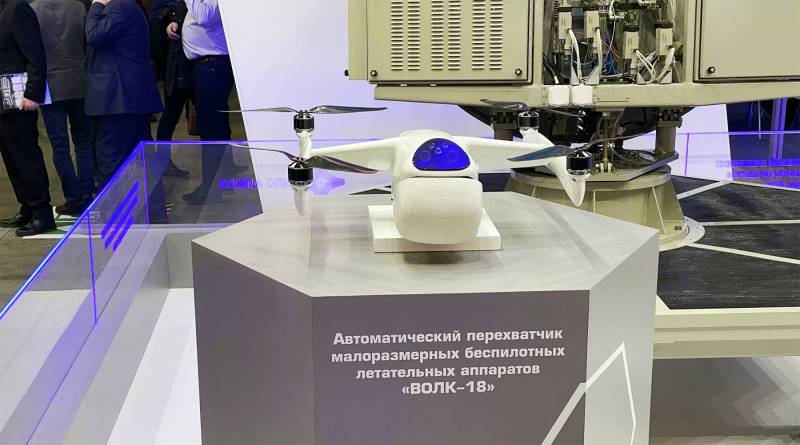 Modified UAV at NAIS-2021. Photo "Almaz-Antey"
Small-sized "Wolf-18" does not impose special requirements on the means and conditions of transportation to the place of use. Its preparation for the flight does not take much time and is not difficult. This provides independent patrolling and automated interception of targets. Thus, in terms of the totality of its characteristics, the interceptor drone can be of great interest to a wide range of operators.

Response to a threat

The widespread use of UAVs and the development of technologies observed in recent years are leading to the emergence of new risks. The combat potential of army reconnaissance and strike aircraft is well known. The experience of recent conflicts also shows the fundamental possibility of carrying out attacks using inexpensive civilian UAVs. Accordingly, the topic of protection against drones is becoming more and more important and necessary. Means of protection against such threats are needed by the army, as well as by the security and civilian structures.

Currently, several main methods of combating UAVs are proposed, which are implemented in a variety of projects from different countries. One of them provides for neutralizing the target using non-lethal contact means. The new Russian "Wolf-18" belongs to this class.

In the main interception mode, "Wolf-18" uses a net shot. The latter should cover the target, interfering with its further flight. In the case of a helicopter-type UAV, the mesh entangles the propellers and stops the motors. Unmanned aircraft are threatened not only by engine stalling, but also by jammed steering surfaces. After such an impact, the aircraft cannot continue its controlled flight; he plans or falls - and breaks. Apparently, "Wolf-18" is capable of sending both light and medium-sized UAVs to the ground. It "hits" the propeller, which allows you to intercept targets larger than the interceptor itself.

Mesh interception has obvious advantages, although it has some requirements. The braided "striking element" effectively solves its task, and a miss when fired does not threaten the surrounding objects. At the same time, it requires a fairly high pointing accuracy. In addition, the intercepted object falls uncontrollably, which carries some threat. 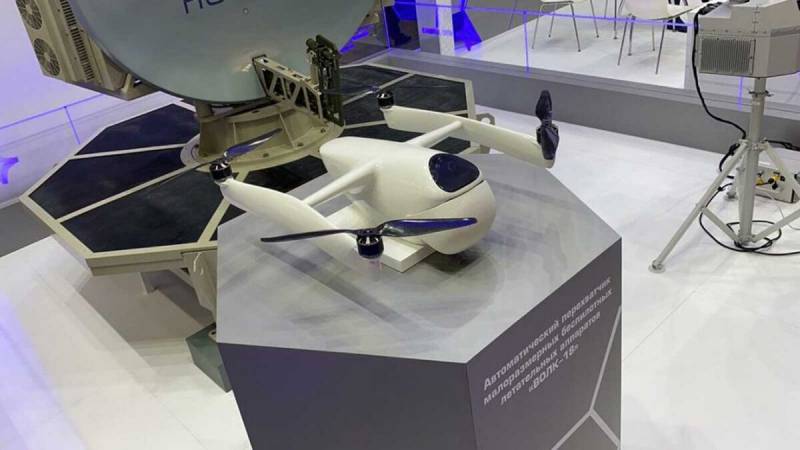 View from a different angle. Photo Bastion-karpenko.ru
As follows from the latest news, in the project "Wolf-18" the problem of detection and guidance equipment was successfully solved. Moreover, after modernization, the interceptor drone is able to work automatically and successfully perform all its functions.

First but not last

At present, in our country, the development of various complexes for combating unmanned aircraft, using a variety of operating principles, continues. The upgraded version of the Volk-18 UAV is the first domestic development of this kind, combining a direct effect on the target and the possibility of automatic operation.

The Wolf-18 interceptor has passed flight tests and has shown its ability to intercept small air targets. This year, it is planned to begin state tests, after which the product will be able to go into series and go into operation in different structures. Probably, the starting customer will be the armed forces showing great interest in air defense systems.

The successful completion of work on "Wolf-18" may become an incentive for the further development of the direction of automated unmanned interceptors. New samples of this kind, developed by different organizations, may be shown in the very near future. The trends in the development of unmanned aircraft clearly show that such equipment will not be left without tasks - and will certainly find its customers.