The myth of "noble pirates" and "treacherous Spaniards" 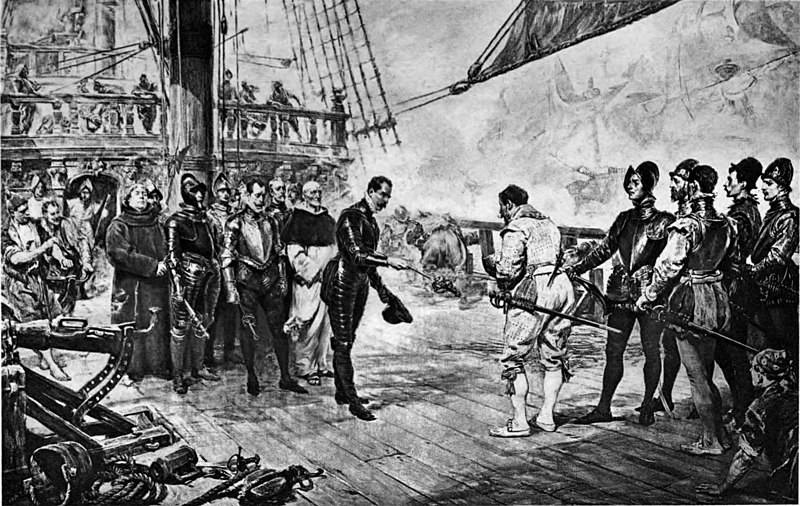 European predators spread more and more widely across the planet. At the same time, the colonial policy of different countries was quite different. A particularly strong difference was between Catholics and Protestants.

When the Spanish conquistadors invaded America and the Philippines, they acted as brutally as possible. Any resistance was drowned in blood.

However, as soon as one or another people or tribe submitted, the natives were converted to Christianity. People were recognized as subjects of the Spanish monarch, received the protection of laws as well as other Spaniards.

Spanish nobles easily married Indian "princesses" - the daughters of the leaders, and ordinary soldiers took local aboriginal women as wives. After all, they went hiking without women. Children from such marriages were completely equal residents.

Many were even proud of their origins. One of the descendants of the "royal family" Inca Garcilaso de la Vega created "History state of the Incas ”, and the descendant of the Aztec rulers Fernando de Alva Ishtlilxochitl wrote the history of ancient Mexico.

The descendants of mixed marriages in the Spanish colonies were not second or third class people.

But it was in the possession of Holland or England. There, marriages between representatives of the "superior race" and the natives, to put it mildly, were not approved. Mestizos - descendants of mixed marriages of whites and Indians, were there people of “second class”.

And the citizens of the Spanish colonies received significant privileges, land and servants. Overseas possessions of Spain became the main source of its income.

The colonies themselves soon began to live quite richly, and did not know extreme repressions and censorship in the metropolis. In particular, Catholicism here quickly began to merge with the pagan beliefs of black slaves and Indians. A double belief arose.

Local authorities and priests have come to terms with this. They understood that heresy can be eliminated only with its carriers, and this is economically unprofitable. Who will work?

Therefore, beliefs that did not oppose Christianity and power (and at the same time those who observed their rituals quietly) were given up. As a result, amazing symbiosis was born: in the Caribbean islands - the cult of voodoo, in Mexico - "carnivals of death" and the cult of holy Death, the cult of "dark-skinned Christ", etc.

Cities competed for the size and beauty of cathedrals and palaces. Spanish architecture has left a large number of beautiful monuments to humanity. Until now, the old quarters of cities in Latin America and the Philippines attract the attention of tourists from all over the world.

Landowners in Mexico, Argentina and Peru organized estates on a grand scale. These were entire states within a state. Fortified estates were erected, where numerous detachments of soldiers and servants were kept.

The owners had harems of Indian women, mestizo, black women and mulatto women. It was not considered a sin.

Both freemen and serfs and slaves worked on the farm. But for the Spaniards, black slaves were dear. They were brought mainly by the Dutch or Portuguese. Therefore, the negroes were protected. And even for serious crimes, they tried to punish them without the death penalty.

They even came up with a special way to punish a Negro slave, but at the same time preserve his working capacity - for an attempt to escape or a daring act, Negroes were castrated. Negroes considered such a measure worse than death. And the threat of such punishment alone became very effective for blacks. The Negro slaves were quiet. 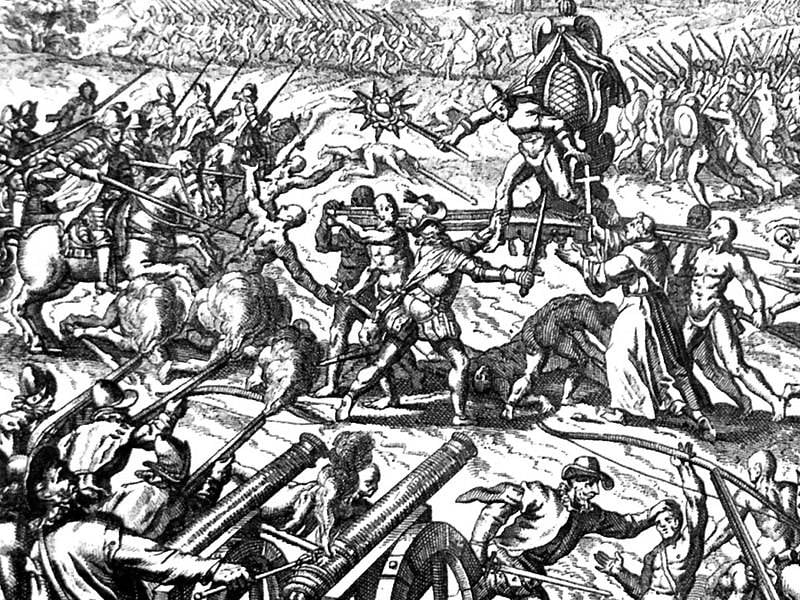 The battle of the conquistadors with the Incas. XNUMXth century engraving

The myth of "noble pirates" and "Spanish villains"

In the XNUMXth century, the Caribbean Sea was the real hornet's nest.

The numerous islands here were divided among themselves by Spain, Holland, England and France. It was far from kings and governments, the locals lived by their own laws.

Immigrants flooded to the fertile islands to grow sugarcane and tobacco, which provided great profits. Planters and successful farmers got rich.

But not everyone knew how to farm in local conditions, many went bankrupt. Their lands were bought up by large landowners. So, the British in Barbados in 1645 had 11 thousand farmers and 6 thousand slaves. And by the 1660s, 745 planters remained, on which tens of thousands of slaves worked.

Many captains hunted for slaves.

Moreover, it was often not Indians or Negroes who became slaves, but whites.

In the rich West Indies, the poor and the peasants who had lost their land rushed. And also adventurers and boys who dreamed of adventures. They paid for travel or were hired to pay for sailors and cabin crews.

And upon arrival, the captains and skippers sold their passengers and temporary sailors for 20-30 reais per head.

In the port cities of England and France, recruiters were operating, offering the poor and peasants free plots of land and fabulous opportunities to get rich. They brought it in and immediately sold it.

Someone signed a service contract for several years. Like, you will quickly work, and there you will find your business and the path to wealth is open. In fact, such servants were attempted to be enslaved completely, or they were exploited in such a way that the person "ended" in a very short time.

The governors turned a blind eye to this, or even encouraged it, since they had a share in local production, which required labor. And they themselves were then the largest planters.

Broken farmers, runaway and emancipated slaves and servants filled the crowds of the port rabble who lived on odd jobs. They also became pirates, in other words, sea robbers.

Among them were recruited teams of privateers who had a certificate, a patent with the right to rob enemy property.

In the West, with the help of fictional novels and films, a myth was created about tough, but noble people (like Captain Blood from the novels of R. Sabatini) who fought with the insidious and bloodthirsty Spaniards. These pictures have nothing to do with reality.

The Spaniards were "insidious villains" only in the minds of the British and French.

After all, "such-and-such" Spaniards were the first to arrive in America and seized the largest and most profitable lands. They plundered the great Indian civilizations (in the north there were mainly tribes of hunters), and managed to create rich and prosperous cities.

It is clear that the Dutch, the British and the French tried to knock the Spaniards out of their rich territories, to occupy the already developed and developed lands. They tried to use the Indians for this.

And the Spaniards, "insidious villains", actively resisted. And they didn’t let themselves be offended (to the British and others). Moreover, the Indians often helped the Spaniards. They were against the "pale brothers". The Spanish cities were warned about the appearance of "gentlemen of fortune", they themselves met with arrows.

Pirates usually did not have large ships. Among them, in general, there were few professional sailors. They operated mainly, contrary to myth, on small ships, often just on boats.

To engage in battles with Spanish convoys, where large and well-armed ships were sailing, they had a lot of guts. They watched over the stragglers hit by storms. They secretly followed them and, at an opportunity (most often at night), attacked and took them on board. 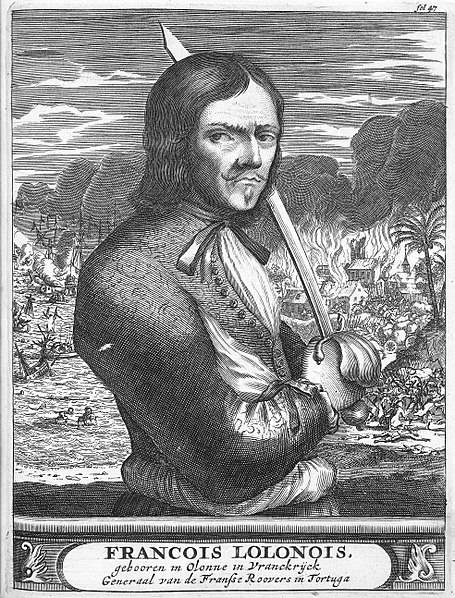 Olone in "Pirates of America" ​​by A. Exquemelin

The main bases of the "noble robbers" were the Dutch island of Curacao, the French Tortuga and the English Port Royal in Jamaica.

There with might and main were building "fun" neighborhoods with taverns, gambling and brothels. Their masters always had information about the pirates' "operations". For their return, ships loaded with alcohol were ordered in Europe.

Gold, silver, money and precious stones went down to booze and corrupt women. They walked in such a way that it happened that yesterday's "winners" were hammered into slave stocks the next morning and sold for debts.

But the owners of this entire industry (and through them the governors) enriched themselves fabulously.

With "nobility" the pirates were tight.

They didn't even care about their wounded. They die, so others will get more. In the captured villages, people were cut, raped, subjected to the most severe tortures, demanding hidden treasures and extorting ransom.

The Frenchman Montbar the Fighter had a habit of slaughtering all prisoners, regardless of gender and age. One of his many notorious torture methods was to open the abdomen of one of the prisoners, remove one end of the colon and nail it to the mast, and then make the unfortunate man dance until he fell dead, urging him on burning log.

The Dutchman Rock The Brazilian had a frenzied disposition. All Jamaica was afraid of him. He behaved like a fury. The prisoners were impaled or laid between two fires and slowly toasted.

The French pirate François Olone was not inferior to him in ferocity. The Spaniards, having heard about his cruelty, did not surrender, they fought to the death.

His antics were remembered with a shudder:

“If Olone began to torture, and the poor fellow did not immediately answer questions, then this pirate did not need to chop his victim into pieces, and finally lick the blood from his saber.”
Moreover, Olone worked in a share with the governor of Tortuga.

But the English pirate Henry Morgan was paired with the governor of Jamaica (then he himself became governor and supported the pirates).

In the captured Spanish cities, Morgan personally chopped off people's ears and noses. Some of his accomplices "simply" tortured and beat. Others were tortured by St. Andrey - driving burning fuses between fingers and toes. The third one wrapped a rope around their necks so that their eyes protruded onto their foreheads. Some were hung by their genitals and repeatedly shoved with sabers.

Their tormented victims died for 4-5 days. Some of them smeared their feet with fat and put their feet into the fire. Neither women nor children were spared.

The Englishman Morgan was a real cynical monster, a typical British pirate (that's why he became governor). Having seized huge treasures in Panama, he robbed and abandoned his people.

Loot ships were hijacked by him. And he threw 1,5 thousand of his companions on the deserted shore. Most of them died from hunger, disease and from the arrows of the Indians.

Meanwhile, their "Admiral Morgan" arrived in his England. There he gave whoever needed it. And soon they started talking about him in England as a "hero". The king himself wanted to personally meet with Morgan. For his services to England, Morgan was awarded the nobility.

Moreover, the English king then appointed this bloodthirsty bandit the lieutenant governor of Jamaica and the commander of the armed forces in the West Indies. Morgan was also assigned to fight the pirates. Since then, he has executed the most notorious robbers.

Thus, in reality, Spanish ships and cities were victims of "noble robbers" from England, who subsequently rewrote history so skillfully.

Band formations and various naval English and Dutch evil spirits of those times fed on the plunder and destruction of Spanish cities, villages and ships.

It is clear that the Spaniards resisted as best they could, they did not stand on ceremony with the prisoners. The pirate's place on the yard.

The Spanish colonial empire as a whole survived.

Piracy, on the other hand, developed to such an extent that it began to threaten the trade and economic interests of England and France.

Extraordinary measures were taken against the pirates, expeditions.

The pirates in the Caribbean were defeated. 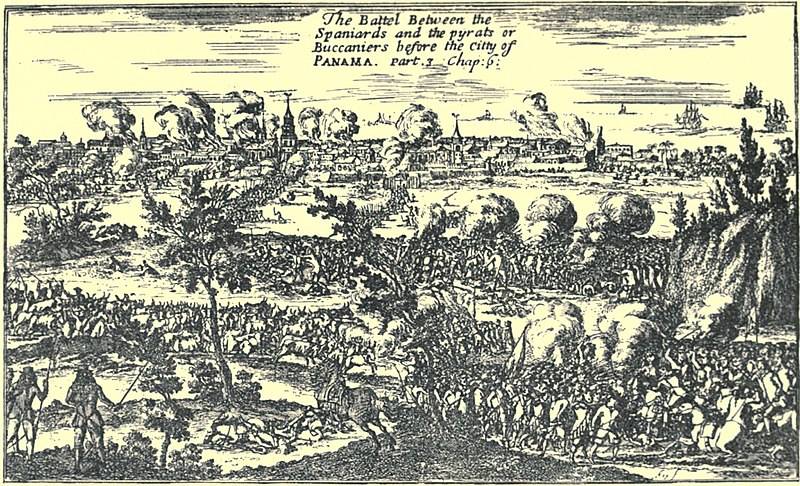