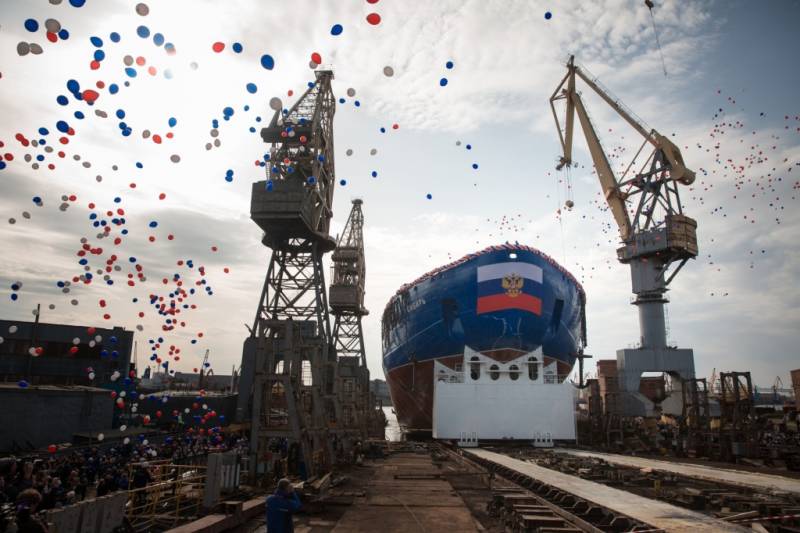 Currently, with the aim of updating the nuclear icebreaker fleet construction of new vessels of project 22220 / LK-60Ya / "Arctic" is in progress. ... The lead icebreaker of this type, Arktika, was commissioned on October 21, 2020. At the end of 2021, the flag will be raised on the second vessel of the series. In total, it is planned to build five icebreakers, which will positively affect the condition and prospects of the fleet, as well as open up new opportunities.

The LK-60Ya / 22220 project was developed in the XNUMXs by a number of organizations. The main contractor was the Iceberg Central Design Bureau, which specializes in icebreakers. The nuclear power plant was designed by OKBM im. I.I. Afrikantov. The Baltic Shipyard in St. Petersburg was later chosen as a site for the construction of ships. As suppliers of individual units and parts, hundreds of enterprises from all over the country were involved in the project.

In 2012, Baltiyskiy Zavod began cutting metal and assembling the first structures for the lead icebreaker Arktika. The groundbreaking ceremony took place on November 5, 2013. In June 2016, the vessel was launched and transferred to the outfitting wall. In October 2019, a nuclear power plant was launched, reaching the minimum power, which allows maintaining and controlling the reaction. 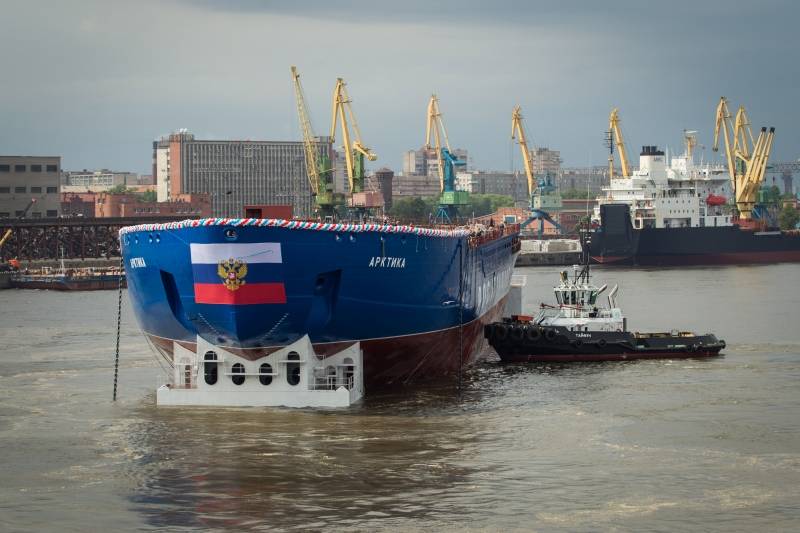 At the beginning of last year, shipbuilders had to revise the project schedule. In February, during work on the power system, one of the propulsion engines broke down. The repair took some time and shifted the dates to the right. By the fall, it was possible to start sea trials, and on September 22 "Arktika" went from St. Petersburg to Murmansk for ice testing.

Based on the results of all tests, an acceptance act was signed on October 21, and the flag was raised on the icebreaker. The vessel was handed over to the Rosatomflot enterprise and is now serving along with other domestic nuclear icebreakers.

At different stages of construction

In 2014, Baltiyskiy Zavod received an order for two serial icebreakers of project 22220. In May 2015, the first of them, Sibir, was laid down. The launching took place in September 2017. Then it was indicated that the vessel would be handed over to the customer in the spring of 2020. However, in the future, the plans changed. According to the latest data, "Siberia" is currently undergoing mooring tests, and by the end of this year it will go into operation.

In July 2016, the third vessel of the series, Ural, was laid down. Since May 2019, this icebreaker has been completed afloat, and now preparations are underway for mooring tests. Due to a general shift in the work schedule, the delivery of this vessel was postponed to the end of 2022. 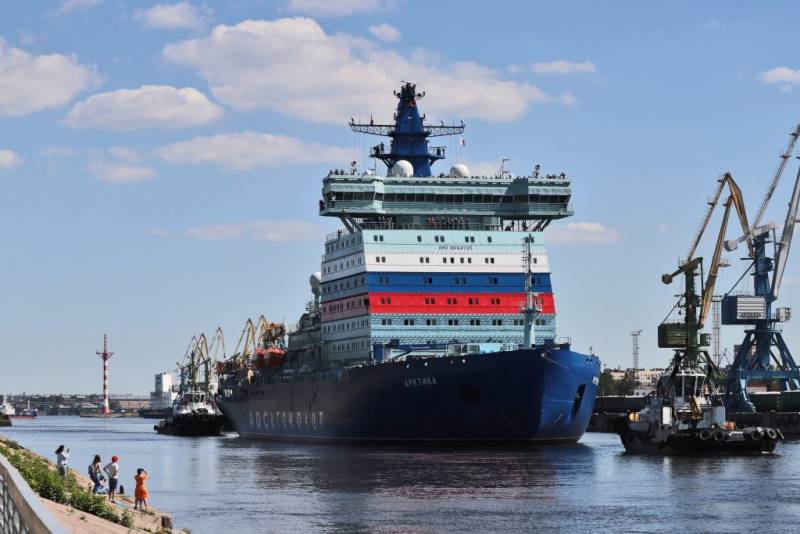 "Arctic" goes to tests
Two more icebreakers are at different stages of construction. Yakutia was laid down in May last year, and Chukotka in December. They will be built and launched in 2022-24. The handover to the customer is scheduled for mid-decade. Thus, no later than 2025-26. the Russian nuclear-powered icebreaker fleet will have five new pennants.

The LK-60Ya project was developed taking into account the experience of building and operating icebreakers of previous types, as well as using modern solutions and technologies. This made it possible to obtain an optimal ratio of all characteristics and some other advantages. As a result, "Arktika" and subsequent new icebreakers will become an effective addition and replacement for existing ships of the old construction.

Icebreakers of project 22220 receive a hull with a length of 173 m and a width of 34 m. The total displacement of the vessel is 33,5 thousand tons. The case was created taking into account the existing experience, but new features are provided. The vessel has ballast tanks providing a draft change from 8,5 to 10,5 m. Due to this, the icebreaker can operate both in the open sea and in shallow water. The organization-developer mentions the ability of "Arktika" to navigate the Yenisei and Ob Bay.

The power industry is based on two RITM-200 pressurized water reactors with a thermal capacity of 175 MW each, which makes the LK-60Ya icebreakers the most powerful in their class. Due to the new layout solutions, the reactors are distinguished by lower weight and dimensions. Management is carried out using modern digital systems. With the help of steam turbine units PTU-72, electricity is generated for all consumers. 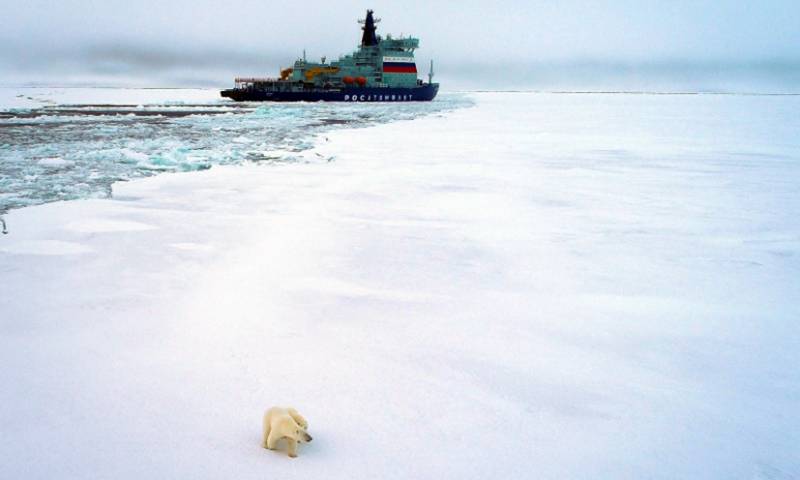 For the first time, a nuclear-powered icebreaker is equipped with the so-called electric motion system (EDS). This complex was developed by the Krylov State Research Center and a number of related enterprises using domestic components. The SED generates, stores and uses electricity to ensure optimum travel performance. The propulsion is provided by three electric motors, each with its own propeller. The total propeller power is 60 MW.

On clear water icebreakers of the "Arctic" type are capable of speeds up to 22 knots. In ice up to 1,5 m thick, a speed of at least 12 knots is ensured. Maximum ice thickness - 3 m; it reduces the speed to 2 knots.

The construction of the LK-60Ya icebreakers and the production of the main components are carried out by the Russian industry with minimal involvement of foreign suppliers. This favorably distinguishes them from the vessels of the previous project 10580, the hulls of which had to be ordered in Finland.

In the interests of shipping

Until recently, Rosatomflot operated four nuclear-powered icebreakers of the 10520 Arktika and 10580 Taimyr projects. It is also necessary to recall the icebreaking transport ship "Sevmorput". The existing icebreakers are old and will require replacement in the distant future. It will be the vessels under construction, project 22220. 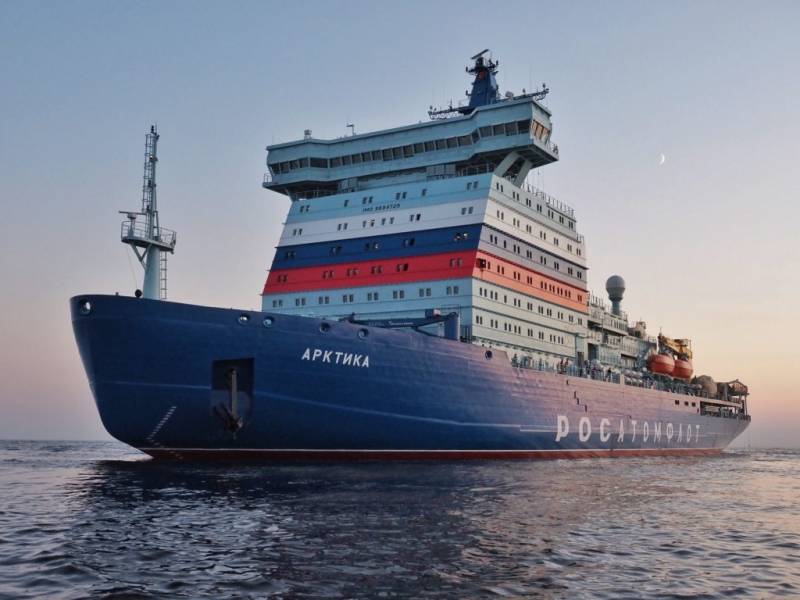 The main task of Russian nuclear icebreakers is to provide navigation along the Northern Sea Route. Two shallow-draft icebreakers of the Taimyr type are also capable of navigating ships and caravans along the estuaries of Siberian rivers. "Arktika" and subsequent icebreakers of the new project are capable of operating both on rivers and in the open sea, and it takes only a few hours to change the draft. This makes the LK-60Ya icebreakers a convenient and effective instrument for ensuring navigation.

The use of the accumulated experience and modern technologies has made it possible to improve the technical and operational characteristics, as well as to obtain the maximum possible service life. From this point of view, the new project 22220 has serious advantages over previous domestic developments, which allows us to look into the future with optimism. 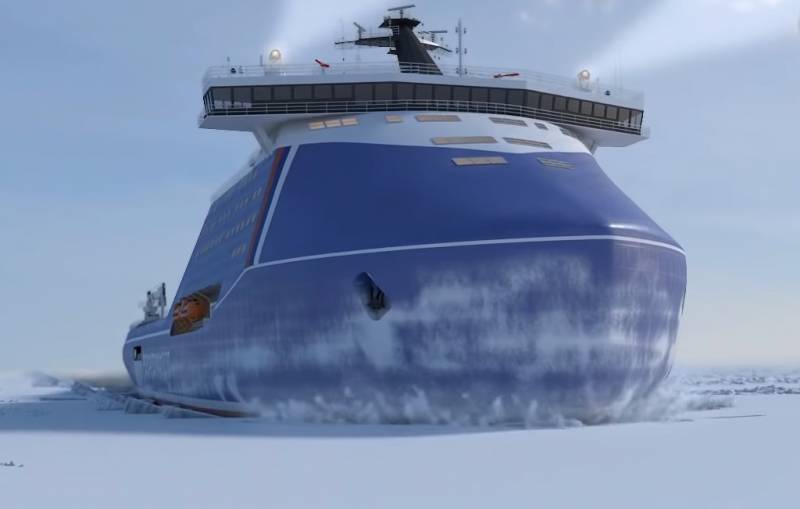 Design look of the icebreaker "Leader"
For this reason, a new project for the nuclear icebreaker 10510 / LK-120Ya / Leader has been developed. The lead ship is already being built by the Zvezda enterprise in the Far East. Two more will follow. For project 10510, the ability to pass through 4-meter ice is declared. This will be helped by a total displacement of more than 71 thousand tons and a 120 MW power plant on shafts.

The future of the nuclear fleet

In the distant future, Rosatomflot will have to abandon obsolete nuclear icebreakers, but their place will be taken by five new vessels of the project 22220 and three Leaders. Both quantitative and qualitative growth of the icebreaker fleet will be ensured. This will make it possible to solve all the urgent and expected tasks of ensuring navigation on the Northern Sea Route and in the nearest regions at any time of the year and practically without restrictions.

The presence of eight new icebreakers with broad capabilities will maximize the potential of the Northern Sea Route and have a positive impact on the economy. So far, plans for the construction of icebreakers have only been partially implemented. Of the eight vessels of the two projects, only one has been brought into operation, but this year the new "Siberia" will be commissioned, followed by the "Ural". The situation is changing and encouraging optimism.

Ctrl Enter
Noticed oshЫbku Highlight text and press. Ctrl + Enter
We are
The construction of nuclear icebreakers LC-60 given the green lightHow many icebreakers do Russia need?
Military Reviewin Yandex News
Military Reviewin Google News
37 comments
Information
Dear reader, to leave comments on the publication, you must sign in.