It's getting hot in Donbass 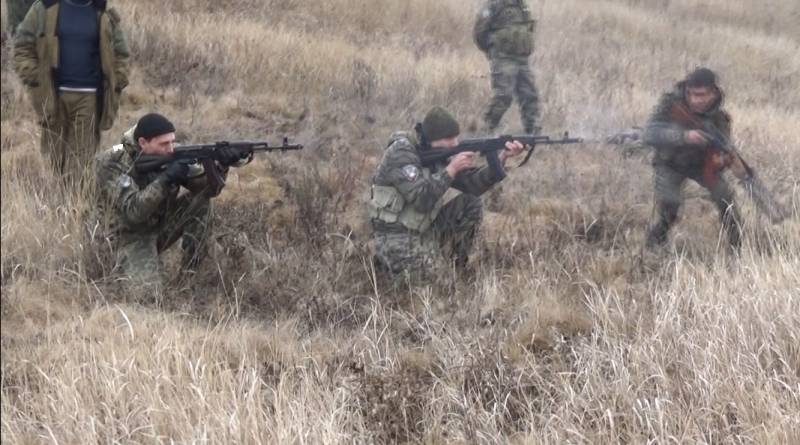 Is the knot tightening?

Ukrainian politicians started talking seriously about the end of the "indefinite" ceasefire, which lasted more than six months with reservations (from July 27). Arsen Avakov, Leonid Kravchuk and other personalities put pressure on the "president of the world" Zelensky, while simultaneously calling for the denunciation of the Minsk agreements, in particular, through the adoption of a law on the reintegration of the "temporarily occupied" territories, developed by the relevant ministry.

Indeed, in Kiev they sleep and see how to get around the impracticable paragraphs of Minsk. Better yet, expand the Normandy group by including the United States (and for some reason Poland). However, the position of the Russian Federation on these issues remains firm. In this connection, the only trump card in the hands of Kiev is the escalation of the conflict.

It has really become noisy again on the contact line recently. Sniper groups are working, rifle weapon, various modifications of grenade launchers and mortars. Recently, both sides have returned to the use of large calibers - almost every day Donetsk and Kiev accuse each other of using 120-mm mortars. Kiev regularly accuses LDNR of remote mining of positions occupied by the Armed Forces of Ukraine.

It is worth noting that the corresponding messages appear symmetrically. This suggests that now the defenders of Donbass are responding to the enemy's provocations more or less adequately and in a timely manner.

The OSCE SMM has recently reported on the movements of the Ukrainian Armed Forces equipment.

So, not far from Kramatorsk, observers found a Buk air defense system. On February 2, the OSCE reported that 17 Akatsia self-propelled howitzers (18 mm) were found 152 km from the demarcation line.


It should be recognized that reports that Kiev is pulling (or moving) equipment have been coming regularly over the past years. That is, now we can talk both about the next rotation or preparation for the exercises, and about the concentration of forces with their subsequent use either for remote shelling of the positions of the NM LDNR or civilian development, or even for an attempt to break through in a particular area (thin places in area of ​​Donetsk is enough).

Indeed, given the growth of protest sentiments and the growing socio-economic problems of Ukraine, Kiev could be profitable, regardless of losses, to arrange another massacre.

It is extremely doubtful that we can talk about a large-scale offensive - there are no prerequisites for the success of such an adventure.

At the same time, a local operation would be convenient for Kiev, whatever its outcome. If you manage to take some settlement, there will be jubilation and an increase in ratings (and at the same time reconnaissance in force will be carried out - to what extent the People's Militia is ready and capable of responding to such escapades).

In the event of a failure of the operation, there will be a reason for all-Ukrainian mourning, further accusations of the Russian Federation of aggression and lamentations against the United States and the EU with requests for help (preferably financial).

Maybe Kiev will even try to play the card of withdrawal from the Minsk agreements in this way.

At the same time, do not forget that the time period for the Armed Forces of Ukraine is relatively narrow - in a few weeks there will be a thaw, and the steppes will become impassable, so that the "blitzkrieg" will take place either in the coming days or will be postponed for at least several months until dry weather will not be established.

Frankly, the most likely seems to be a return to the active use of heavy artillery on the demarcation line, without attempting to advance.

This method of pressure on the LPNR and Moscow was actively used from the first days of Zelensky's accession.

At the same time, it is worth noting that this time, most likely, the Armed Forces of Ukraine may well face a full-fledged and adequate response.


In the LPR, meanwhile, they are seriously preparing for the first draft.

It should be admitted that most of all this topic worries not local residents, but Ukrainian media and network patriots. Considering that Donetsk and Lugansk have repeatedly promised that conscription will take place far from the front line, this decision looks reasonable and is perceived relatively calmly.

At the same time, a number of questions remain open.

For example, how will the passage of military service in the LPNR affect the need to serve when moving to Russia? Will there be any benefits (for example, when entering universities) for demobels? Will numerous representatives of government social movements, as well as children of the nomenklatura, wear a tarpaulin? Or will this prerogative only apply to mere mortals?

Of the positive News.

The People's Militia continues to expect a systematic vaccination campaign against COVID-19, but no one has named the exact dates yet.

At the same time, in Donetsk, the first certificates of combatants were issued - an event that has been expected over the past five years.

I would like to believe that this measure will help not only "legalize" the status of the militia, but will also support all those who suffered in the early days of the war. And the relatives of the dead defenders of Donbass.

It is still unknown whether the corresponding norms will be introduced in the LPR.

Ctrl Enter
Noticed oshЫbku Highlight text and press. Ctrl + Enter
We are
March of the nationalists. Kiev on the way to dictatorshipDisassemble the yolk
Military Reviewin Yandex News
Military Reviewin Google News
206 comments
Information
Dear reader, to leave comments on the publication, you must sign in.