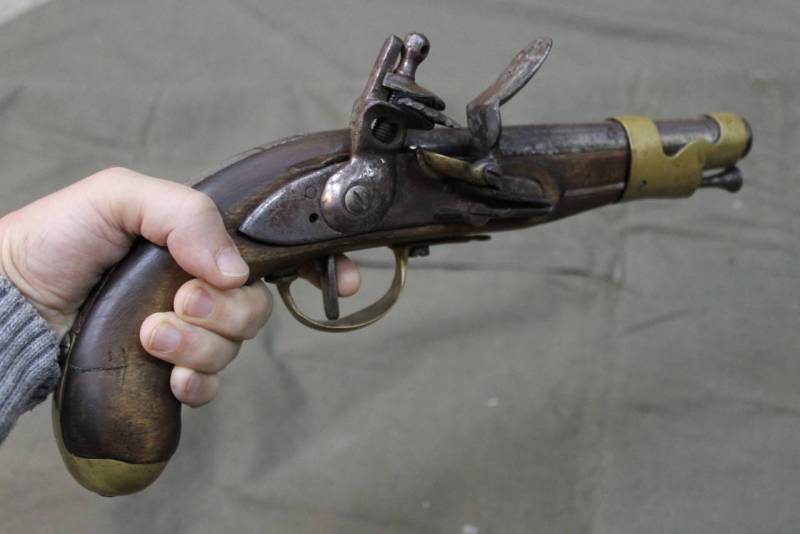 French cavalry pistol An XI (French cavalry flintlock pistol model An IX) 350 mm long and 17,1 mm caliber. Weight 1,3 kg. See how it looks in the hand of a 178 cm tall man.Penza Museum of the Russian Army

Multiple charge! And the gunsmiths were able to achieve success on this path very early.

And although their success cannot be called complete, they managed to make a multi-charge weapon and with wick and wheel locks. And, of course, both rifles and pistols with a flintlock strike lock ...

“Everything will be as we want.
In case of misfortune,
We have a machine gun "Maxim",
They don't have Maxim. "
(Hilary Belloc "New Traveler")
History firearms. The epigraph does not mean at all that this article will focus on a machine gun. No, absolutely not.

With these words, we just wanted to emphasize the importance of fast shooting. And the fact that they understood this for a very, very long time. That is why, by the way, the wheel lock was replaced with a flint percussion lock. After all, wheel loaders had to be wound with a key, which took time. And more time to load and ... you manage to make fewer shots than your opponent.

Another problem was the high cost of the wheel lock, which prevented its mass distribution. This led to the appearance of the snaphons castle (or "snaphan" in a number of our Russian publications), which was more perfect than the wick one, but cheaper than the wheel one. And almost as reliable.

The first examples of such a castle appeared in 1525. However, it took over 100 years for them to evolve into a classic flintlock. 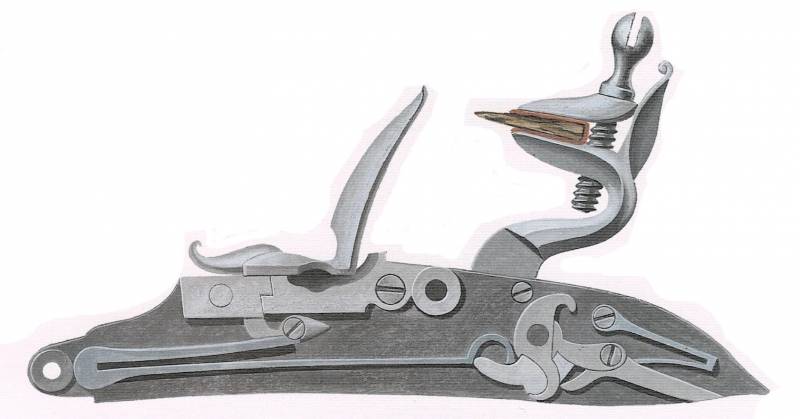 Classic French battery-operated flintlock. Drawing from the book "Small Arms" by Christopher Hunt. P. 8
Each country created its own version of such a castle. As a result, there were such varieties of it as: Swedish, Norwegian, Baltic, Karelian, Dutch, Russian castle.

Its Mediterranean version is known. And also in many varieties: Italian, Turkish, Spanish, Portuguese, Arabic and Caucasian.

Sometimes it was called simply Spanish - in Turkey. And Turkish - in Russia. 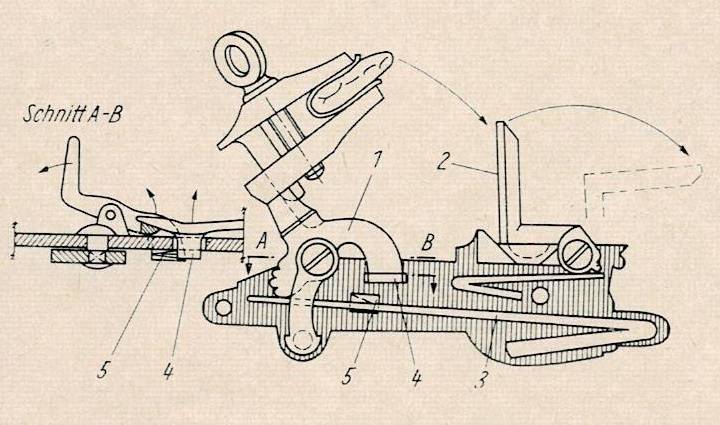 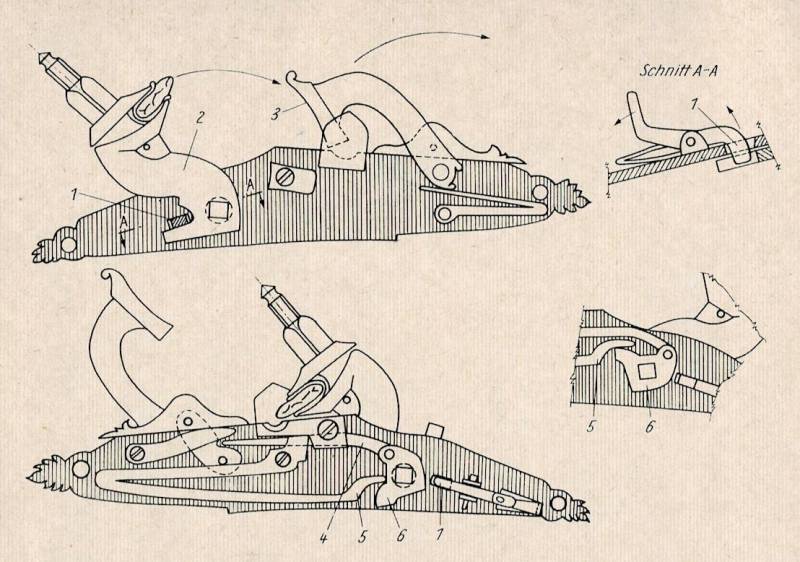 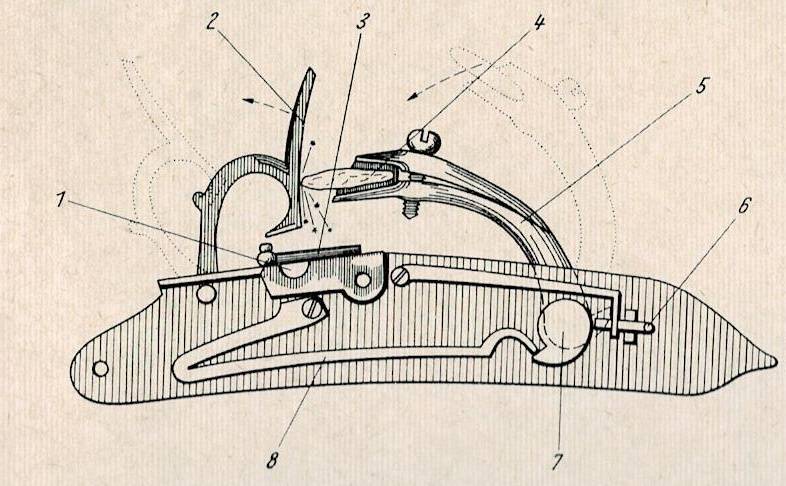 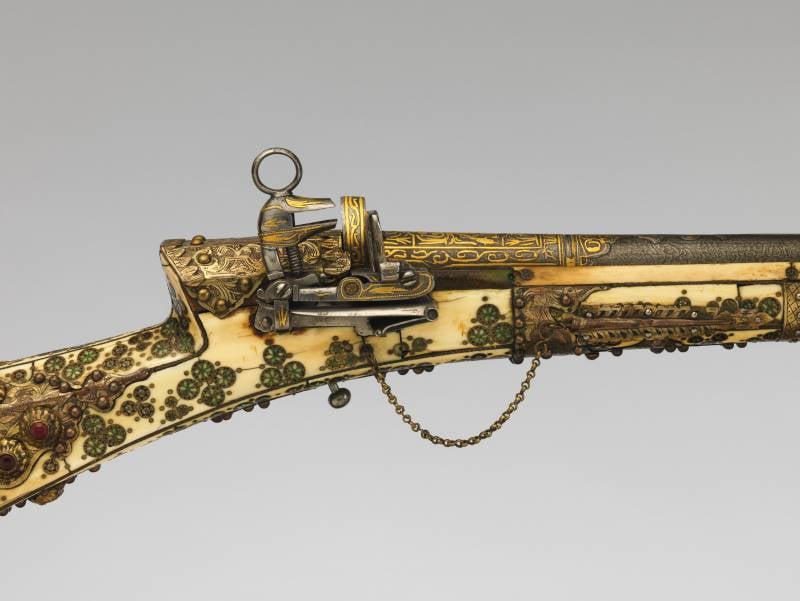 Mikhelet, a Turkish percussion-type flintlock, is an early and durable form of flintlock popular throughout the Ottoman Empire from the XNUMXth to the early XNUMXth century. Several elaborately decorated shotguns, very similar to this specimen, are still preserved in Istanbul. Perhaps they were made for the Ottoman Imperial Guard. Metropolitan Museum of Art, New York 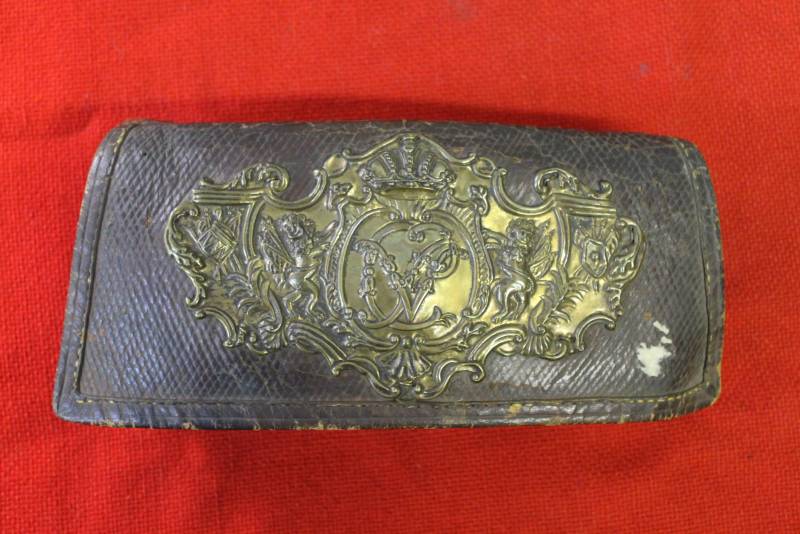 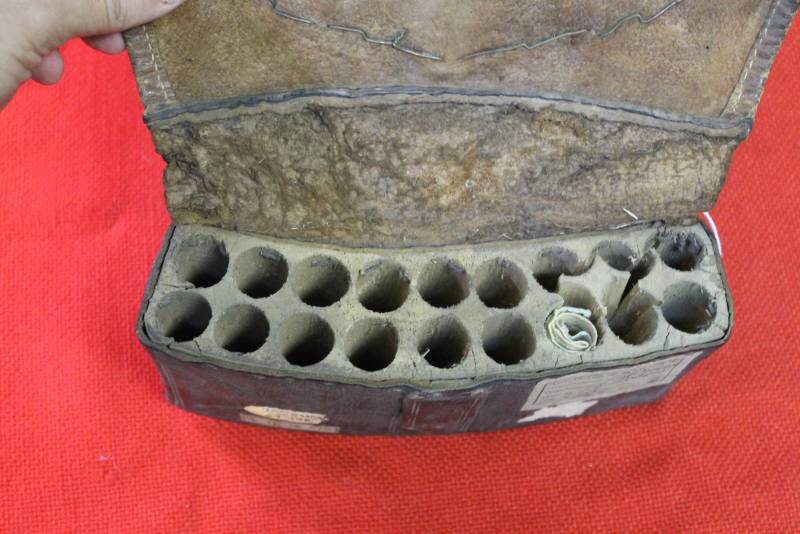 And this is the same little bag, but open. As you can see, there are very few nests for cartridges - only 18. And more was not required because even in the most fierce battles, soldiers most often did not fire more than 10 shots. So why give them a lot of cartridges and arm them with multiple-charge weapons? Penza Regional Museum of Local Lore
The main thing that still differed from this lock from the wheel lock was that instead of a wheel with notches, an impact flint was used - a slightly curved or completely flat steel plate, on which a trigger with flint or pyrite hit.

From the impact, a stream of sparks poured onto the shelf. That's all.

But even here there was a place to improve even this simple scheme.

In France, the flint was combined with the cover of the powder shelf. On impact, the lid opened, and a sheaf of sparks fell on top of it. It is believed that it was designed by a certain Maren Le Bourgeois in the city of Lizot in France, who made weapons for Henry IV. And already in 1605-1610. made him guns with locks like this.

The Maren Le Bourgeois shotgun (c. 1550-1634) was made in 1605-1610. Material, technique: steel, wood, bone, mother of pearl, copper alloy, forging, polishing, blackening, gilding, inlay, engraving, casting, chasing. Length: 141 cm; barrel length: 103,5 cm.Inventory number ZO-94. State Hermitage, St. Petersburg
As a result, such locks began to be called battery locks. Since they combined the shelf cover and the flint into one piece (battery), and also differently than in other locks, the trigger was arranged.

On pistols in the first half of the XNUMXth century. And on hunting rifles - only in the second.

They appeared in Russia under Peter I. And they existed until the Crimean War itself.

However, for us in this case, the fact is more important that, simultaneously with the improvement of the charge ignition system, gunsmiths did not stop looking for ways to make their weapons also multiply charged.

And here they have achieved considerable success.

In the previous article, you could see a photo of a hunting wheeled revolver musket with a drum for eight charges with a wick lock. It was made in Germany around 1600-1610.

However, revolver pistols with much more advanced locks soon appeared. 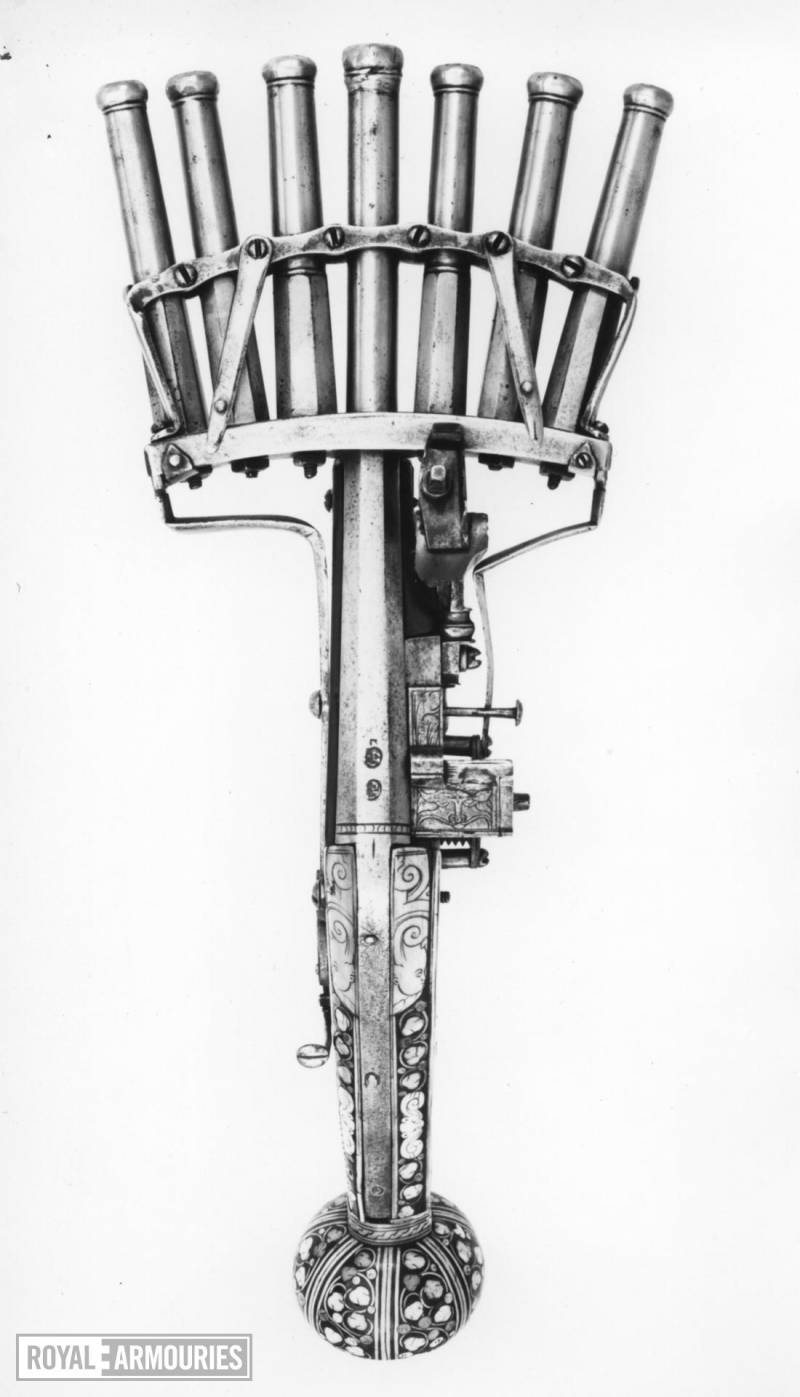 Here, for example, is a 279th-century pistol kept at the Royal Arsenal in Leeds: it has a wheel lock and seven barrels arranged in a duck-paw fashion. The barrels are octagonal at the base and round at the muzzle. Moreover, the central trunk is twice as long as the other six. The location of the wheel is external and the details of the lock are engraved. The wooden stock has a flattened onion-shaped handle, completely encrusted with a deer antler with engraved foliage. Central barrel length 3,061 mm. Pistol weight XNUMX kg.
However, as early as 1680 in England, master John Daft made a revolver with a snaphons lock, with powder shelves on the drum, which cleverly shifted when fired by a flint plate. 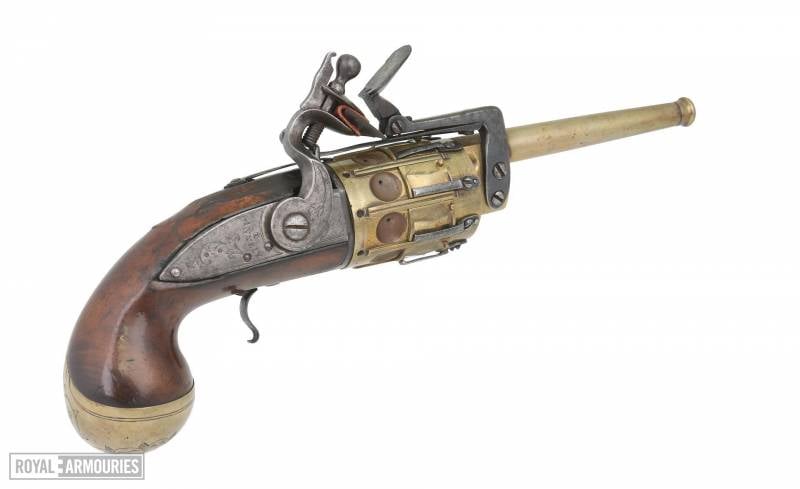 This is a very early example of a "real" revolver with a fixed barrel in front of a rotating cylinder and a side lock. Made by gunsmith Thomas Annley circa 1700. The drum is brass, it is fixed automatically before each shot. The barrel is of the traditional cannon shape, with the exception of the breech, which is enlarged to accommodate the drum shaft and has a cutout seen on later Colt revolvers (to facilitate drum loading). There is also a light hardwood engraving on the barrel. The powder shelves have sliding covers, each of which includes a small handle and is operated by a flat spring to hold it open or closed. The castle belongs to the early "French" style of the 325th century. Materials: walnut, iron, steel, copper alloy. Overall length 137 mm. Barrel length 1,29 mm. Total weight XNUMX kg. Royal Arsenal, Leeds 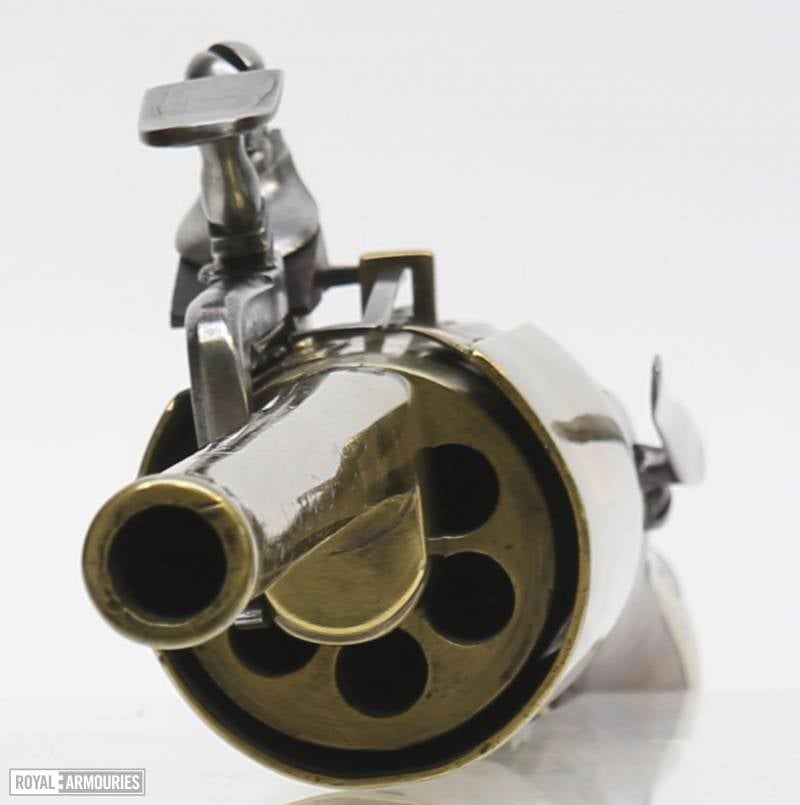 A fifteen-round magazine-type hunting rifle (albeit a flintlock!) P. Kalthoff's system. Master Charles Cousin, Paris, c. 1710 The bolt with gunpowder and bullets was activated by turning the trigger guard. Variants with a wheel lock are also known. By the way, today it is on display at the State Hermitage Museum in St. Petersburg. This is how mysterious the paths of some artifacts are. Material and technique: steel, wood, horn; forging, carving, engraving, bluing. Length 128,4 cm; caliber 14,5 mm. Inv. No. З.О.-638. State Hermitage, St. Petersburg 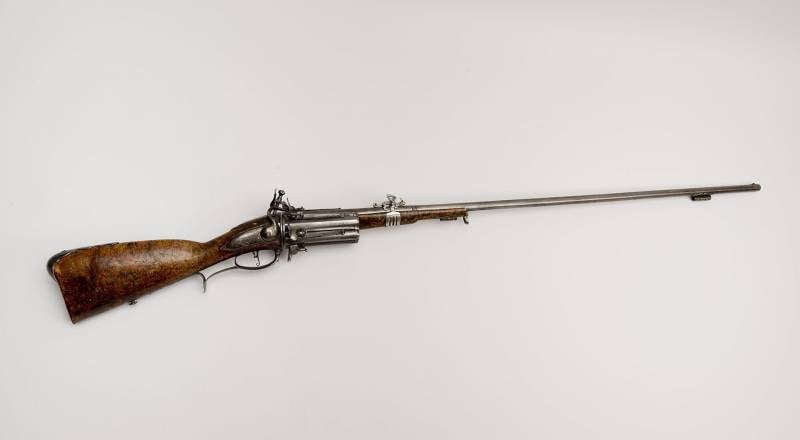 Russia was in no way inferior to Western gunsmiths here.

So, in 1790, we also made a drum hunting rifle. That is, the level of development of technology was so high that it made it possible to make even such a complex weapon.

Yes, dear. And therefore, it did not find application in the army then.

But the reason was different. Not only in price. It's also about tactics.

The infantry, getting close to the enemy, usually fired only ... two volleys (or rather had time to fire!). Then she attacked the rest with bayonets. And the whole reckoning was on who remains after this firing: our own or others. With this order of warfare, neither a large stock of cartridges, nor multiple-shot rifles were simply required.

Maximum rate of fire at the level of two shots (three maximum, until the soldier is not tired). And that's all. And then - "well done" bayonet. And win or lose. 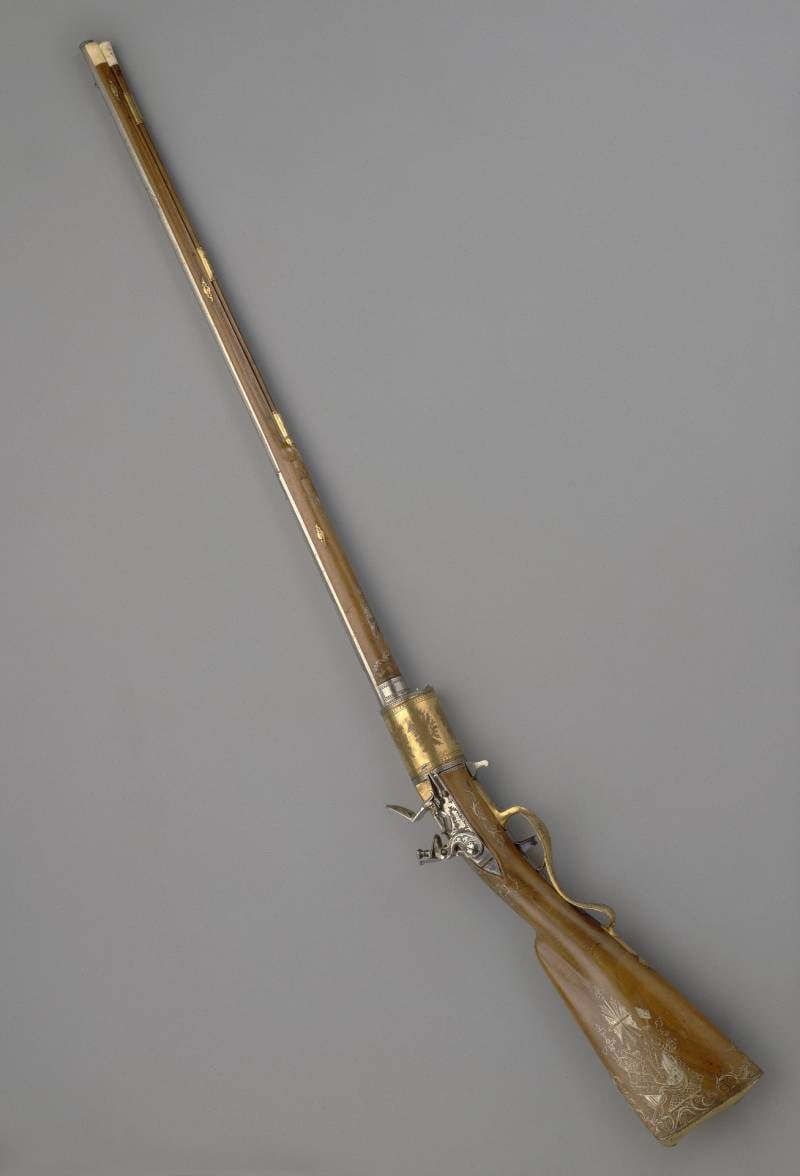 Such was, for example, the flintlock of the Italian Lorenzoni of the late XNUMXth century, which had two tubes in the butt: one with gunpowder, the other with bullets. A dispenser was installed in the breech, controlled by a lever. One turn - and a bullet was put into the barrel. The second - and the measure of gunpowder was filled in. Then you could put the gunpowder on the shelf and cock the trigger.

In 1780-1785. In India, the Shalembron flintlock rifle was manufactured. The tubes under the barrel contained gunpowder and twenty-round bullets.

Truly, the ingenuity of some gunsmiths knew no bounds! Here's a look at the picture below. 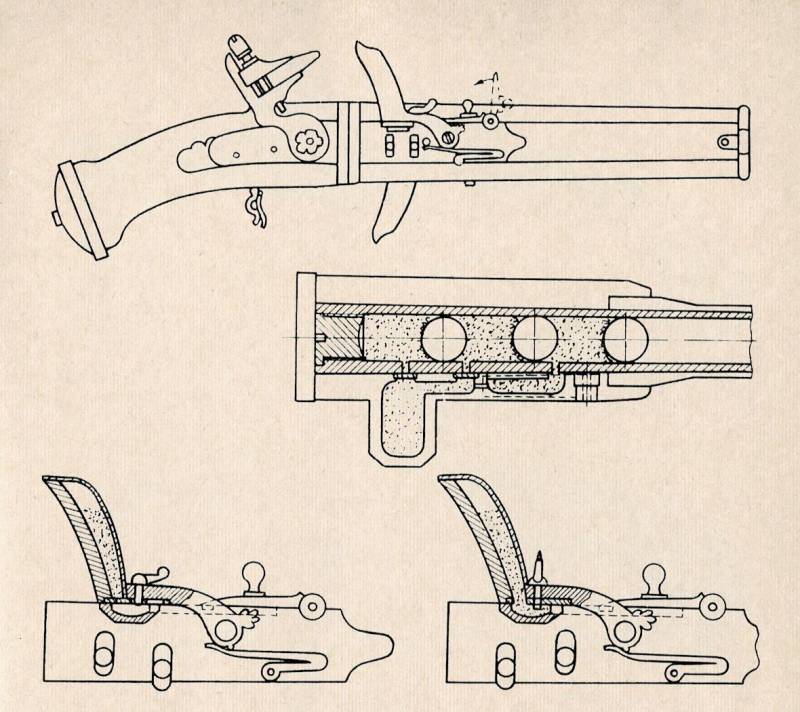 Above: Espignol-type six-shot double-barreled flintlock pistol with three consecutive charges in each barrel, rotating barrels (!) And sliding powder shelves. Moreover, the lids of the shelves, which at the same time were flint, were hollow inside and there was gunpowder. The dispenser was mounted on the lid of the folding shelf so that it was enough to turn it twice so that the required amount of gunpowder spilled onto the shelf. When struck, the flint was thrown back, so that there was a relatively small danger that powder gases would penetrate into its container and set fire to the gunpowder. In any case, six shots from a pistol, which did not require six operations with cartridges and a ramrod, of course, people were impressive then. But on the other hand, if such a pistol exploded in a person's hands, then it was also something. 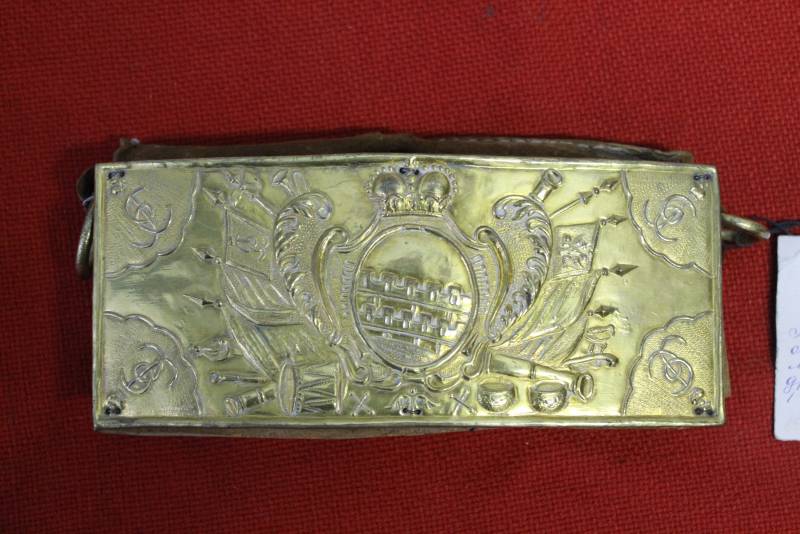 Lyadunka hussar of the Russian imperial army at the end of the XNUMXth century. Penza Regional Museum of Local Lore 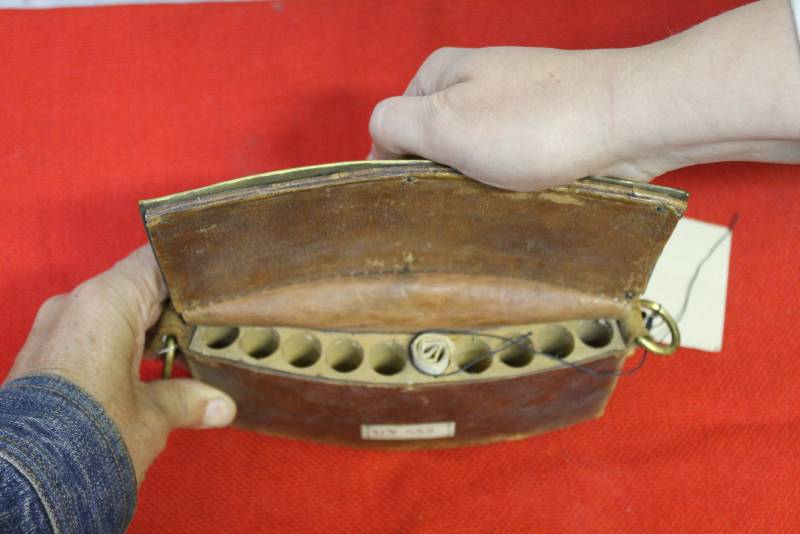 And this is how it looks from the inside. As you can see, the stock of cartridges in it is very small. Penza Regional Museum of Local Lore

Interestingly, at the end of the XNUMXth century, flint six-shot revolvers of a very perfect design were already being made in Russia.

Here, for example, one such pair: made in Tula in 1790 by master Ivan Polin. Below is their photo. 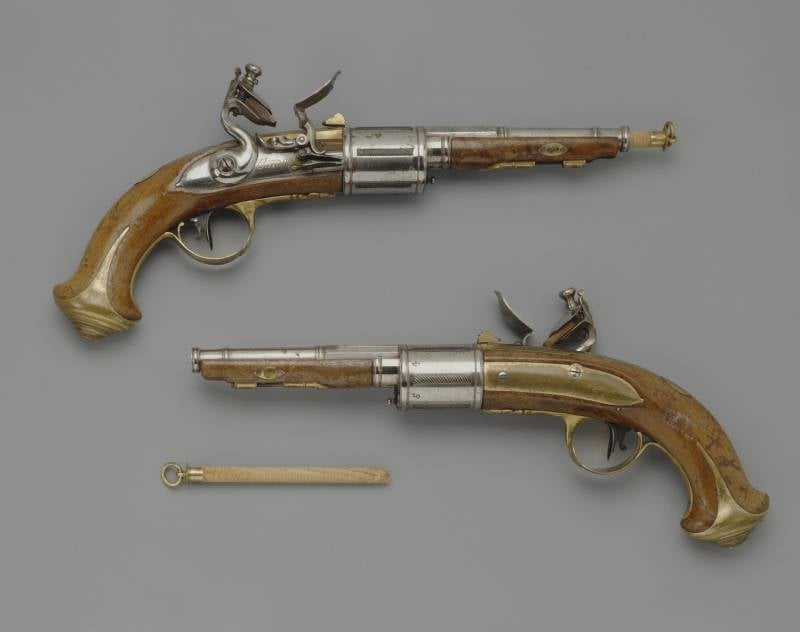 Revolvers by Ivan Polin. Tula. Material and technique: steel, gold, silver, wood, brass; forging, carving, chasing, engraving, thawing, gilding. Length: 38,5 cm; caliber 14,2 mm. Inv. No. З.О.-5186. State Hermitage, St. Petersburg
But it is clear that such a weapon was rare. And in light of the above-mentioned purely tactical reasons, it simply could not find wide distribution.

Nevertheless, these were all "steps" on the ladder of progress.

Everything up and up to perfection.

The site administration and the author are grateful to the Deputy General Director of the State Hermitage, chief curator S. B. Adaksin for the provided photographs of the exhibits.