Where are you going, Rus? 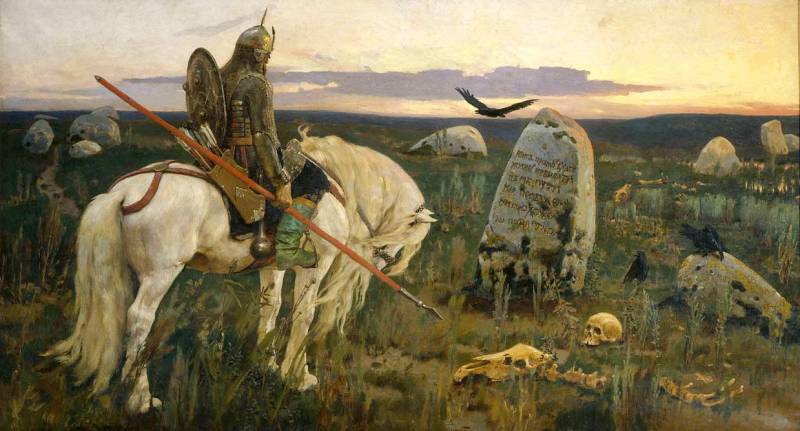 The Knight at the Crossroads. Painting by V. Vasnetsov, 1882

From the 1990s to the present, Russia is distinguished by a complete absence of strategic planning, tactical measures and ideology of the country's development (except for naked materialism, which led to the plundering of the state), as well as an image of the future of Russian civilization. What's ahead, gentlemen from the presidential administration, government and State Duma?

What kind of Russia do you represent and where is the place for the Russian people in it? Why do you need another 20-30 years, if three decades have already passed, and practically nothing worthwhile has been done?

Most of the people are at the "broken trough". If the “elite” does not serve the people, even to the point of self-sacrifice, then there is no strengthening of the people's well-being, but there is only theft of an absolutely unimaginable scale?

In an interview, Leonov quite correctly noted that the West is still intimidated by the vastness of Russia.

We no longer pose a threat to them in scientific, technological, industrial or economic plans, like the USSR. The only threat is our nuclear arsenal.

According to their estimates, Russia has run out of steam. We are getting weaker demographically every year. The population is declining. And every year the losses will be higher.

At the same time, the population is aging rapidly. Youth is the future, the active core of the nation. And its less and less. She has a negative attitude towards power. Many people dream of going abroad, moving to the "developed world".

Therefore, the West believes that Russia is already doomed. The great Russian civilization is over.

However, the Western world is still afraid of the "Russian barbarians". He believes that potentially a great power could be born again on such a large and rich land.

Therefore, our "partners" do their utmost to promote separatism and weaken Russia. The goal is to finish off and dismember Russia. On the agenda is a long-term program for the dismemberment of Russia and the eradication of the Russian worldview, culture and language, the complete extinction of the Russian people. In general, everything is like under Hitler, the intentions are the same.

General Leonov says that there is no purpose for the existence of today's Russia:

“We have no development goals, no prospects.

After all, every person, every family makes some plans for the future, but our country lives one day.

Why she lives and where she is going, few people think about it.

Our maximum is to live until Monday.

All this I attribute to the signs of a dying civilization. "
It is long overdue to talk about the future of the country and the people.

We do not know the answer to the question:

"Where we are going?"
The life of our people on the planet has slipped into biological vegetation.

We need a goal, an idea, a program so that people work consciously, purposefully and with tremendous dedication.

Only in this way can our people be awakened from the darkness, to release their still remaining creative, creative energy.

Among the vivid signs of the decay of Russian civilization are the following:

1. Lack of a development concept... Strategic life plan. And most importantly - a positive and positive image of the future for the country, for the people and for Russian civilization.

Rus / Russia has always stood on the side of goodness and justice. Without an active proclamation of a course for good and truth, Russian civilization decays and degrades. Now the void is occupied by materialism - the "golden calf". This is the basic reason for the degradation and extinction of our civilization and people.

Hence the lack of ideology. Which, again, was replaced by Westernization and liberalism dominated by misanthropic theories.

Even the Russian Church, which is supposed to support the belief in love and goodness in people, is mired in money-grubbing and the pursuit of property.

2. Constant lies and deceit on all levels of power... "The bureaucracy of propaganda", which is believed only by "zombie" TV.

"But neither the throne, nor the state can be strong, standing on lies and deceit."
You cannot endlessly deceive the whole people.

Since the 1990s, the management system has been semi-colonial, comprador-oligarchic, oriented towards the West.

Colossal social stratification. One tenth of Russians own about 90% of the country's wealth.

The ruling elite, in essence, has already turned into a privileged caste. To the estate

“New nobles, who no longer want to live according to the same laws and rules with the people, and their representatives despise the“ common people ”.
Dividing people into “chosen-successful” and “losers-rogue”. How did it end once in our stories, we remember well - the catastrophe of 1917.

4. Financial and economic dependence on the West. From the governing decisions of the Fed, the World Bank, the IMF and the ECB.

The lack of money in the economy, the emission of the ruble by the IMF requirement is rigidly tied to exports. This led to a lack of national investment in industry and infrastructure.

At the same time, the entire infrastructure of the country (for example, the housing and communal services system, water supply) is destroyed not only from time to time, but also from a lack of investment.

The focus of the country's entire economy on export is the "pipe" economy. When export duties are minimal and excise taxes on the sale of raw materials within the country are highest.

As a result, the most developed industry in the Russian Federation is the mining and primary processing of raw materials, and the highly intelligent industry, machine tool building, microelectronics, and robotics are barely breathing. There is practically no industry of electronic components and the production of chips, no software for digitalization is being created, which leads to a new dependence on the West (technological and digital).

5. Investments in progress (R&D, science, education and medicine) are minimal.

6. The extinction of the Russian people and a number of other indigenous peoples of our civilization.

In 2020, we lost more than 500 thousand people. This is slightly less than the population of the Pskov region.

With a population decline at the same rapid pace, by 2024 we will have already lost 1,2 million people. And this is the population of the Tver region.

As a result, the XXI century will be the last one for our civilization. Its place will be taken by more resilient and life-loving peoples and civilizations.

7. Ethnic and cultural-linguistic suppression of Russian self-awareness and Russianness.

The priority is Western culture (its American surrogate).

The Russian super-ethnos is split: the Russians of Great Russia and Little Russia are pitched and pitted in a fratricidal massacre.

Ethnic diasporas from the Caucasus and Turkestan are artificially supported.

The Russian super ethnos is divided, divided and suppressed.

These and many other factors clearly show the extinction of Russian civilization and people.

There are very few forces left for revival to create an opportunity for creative work for the good of the Motherland and the people. Creation of a society of the future, a society of knowledge, service and creation.

Some believe that the point of no return has already been passed. And ahead of Russia are waiting:
a palace conspiracy, a new turmoil, a "parade of sovereignties" and an external threat represented by Turkey, Japan and Poland in alliance with the Ukrainian Bandera and other local Nazis.

Others believe that there is still a chance of survival. Subject to the urgent development and public presentation of the strategic vector and matrix of the future of Russian civilization.

First of all, Russia needs to become a world leader again in the field of defending the truth and justice of the peoples of the planet, openly and actively. This will return to Russian civilization the creative and invincible energy of truth.

The ideological position of Russia (as opposed to the dehumanizing concepts of the West) will be drastically strengthened by the worldwide promulgation of the unambiguous priority of protecting and protecting natural human-saving concepts. With a vector to actively and effectively preserve the natural nature of both the planet as a whole and each individual person (with a priority on the inalienable right of every person in the world to be and remain what he was born: a man or a woman - freedom from transviolence).

In other words, one should respond to the aggressive ideology of the West (constructing the priority of transhumanistic violence) by creating a worldwide bloc of defenders of the ideas of natural humanism (a person has the right to remain a natural person).

The course towards freedom from trans-violence will become a detonator for the revival of Russian civilization.

Ctrl Enter
Noticed oshЫbku Highlight text and press. Ctrl + Enter
We are
What you didn't want to know about EnglandWhat we lost
Military Reviewin Yandex News
Military Reviewin Google News
234 comments
Information
Dear reader, to leave comments on the publication, you must sign in.