Progress and failure. Technologies of the RAH-66 Comanche project 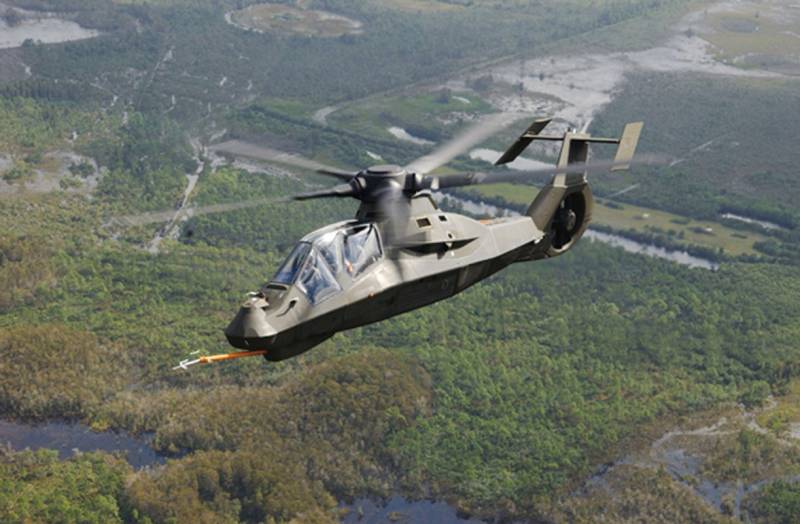 In early 1996, an experienced reconnaissance and attack helicopter RAH-66 Comanche, developed by Boeing and Sikorsky, made its maiden flight. Tests continued for several years, and in 2004 the Pentagon decided to close the project. The resulting helicopter did not fully meet the requirements, and was also too expensive and overly complicated. One of the reasons for the high complexity of the project was a number of new and bold solutions and technologies in different areas.

The future RAH-66, developed under the Light Helicopter Experimental (LHX) program, had special requirements for visibility. The reconnaissance and strike vehicle had to literally hang over the battlefield - with understandable risks. Therefore, it was necessary to simultaneously reduce the radar, infrared and acoustic signature. 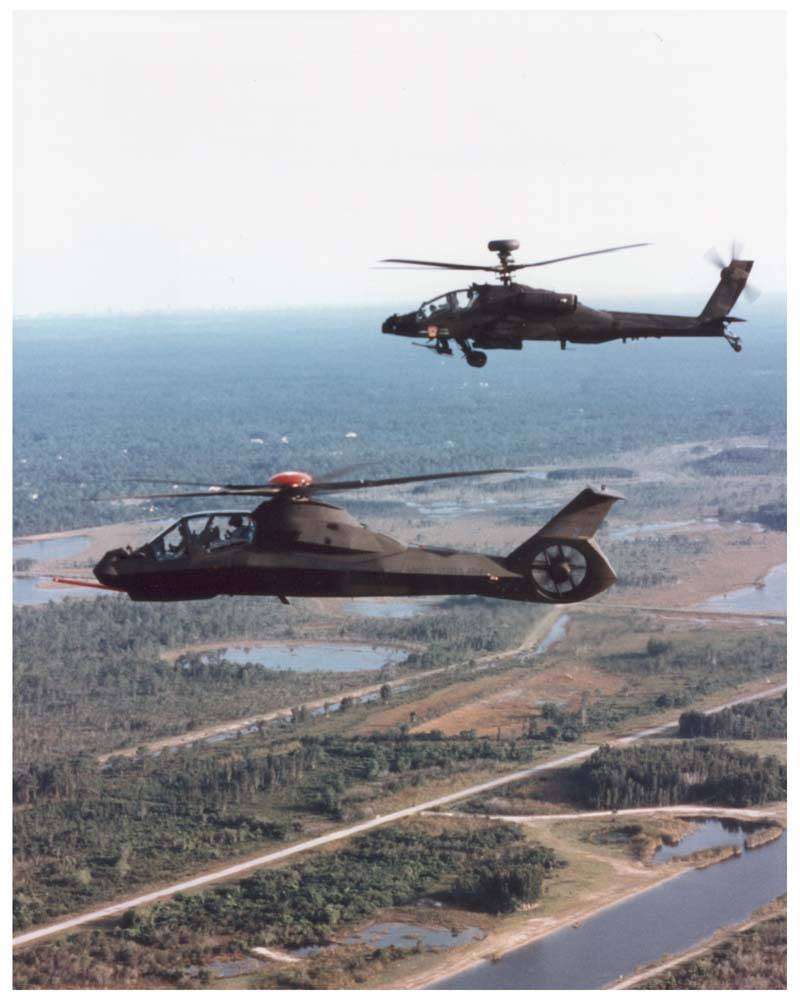 Comanche and Apache in the air
The airframe for RAH-66 was designed using all available technologies and developments. It received a characteristic angular shape, formed by flat and curved panels, as well as rounded edges. The airframe skin was made of composites with a minimum reflection coefficient. In addition, a special coating with the function of absorbing radio waves was used.

The main and tail rotor became a serious problem in the context of stealth. The bushing of the carrier system was closed with composite fairings, and the blades were built with a minimum amount of metal and with all the necessary coatings. These measures made it possible to drastically reduce the reflections from the main rotor, although they did not exclude them. The tail rotor received composite blades and was placed in an annular channel. This eliminated radiation from the front corners, and also reduced signal reflections from the side. 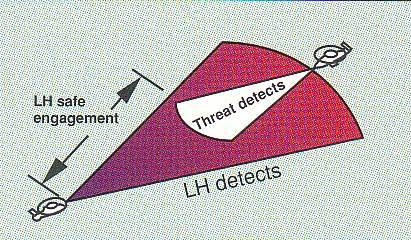 The obvious advantages of stealth: the helicopter finds the enemy before it reveals itself
The Comanche was distinguished by the minimum number of protruding parts. So, the bow cannon installation could turn back along the fuselage and remove the barrel into a closed niche. Suspended armament was placed on the wings, retracted into the side cargo compartments of the fuselage. Open transportation was also provided weapons with increasing load and with increasing visibility.

The development companies reported that all these measures made it possible to bring the helicopter's visibility to the possible minimum. Depending on various factors, the RCS of the RAH-66 helicopter was 250-360 times lower than that of the AH-64 Apache combatant. Moreover, the EPR helicopter was compared with the AGM-114 rocket. However, the exact numbers have not yet been disclosed.

Measures have been taken to reduce the visibility in the infrared range. So, the airframe coating not only absorbed radio waves, but also had the function of a heat insulator. This prevented the heat from the internal units from heating the skin and unmasking the helicopter. In addition, it was necessary to create an original system of indoor units, which reduces heat emissions to the outside. 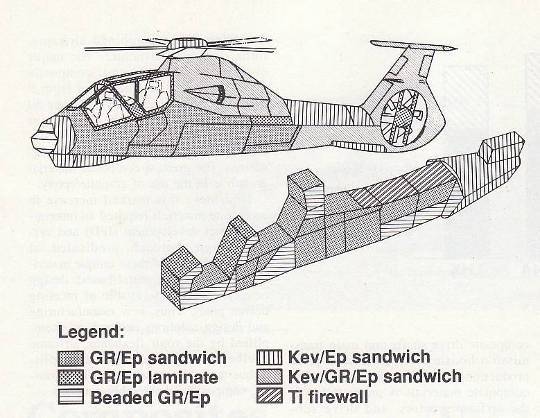 The use of composites in the fuselage structure
The RAH-66 helicopter was equipped with two LHTEC T800-LHT-801 turboshaft engines with a capacity of 1563 hp each. With a maximum take-off weight of 5,6 tons, this made it possible to obtain high flight performance. In addition, other advantages were achieved. In particular, the Comanche's powerplant produced less hot gases than the more powerful Apache engines.

Hot gases from the engines entered a specially designed cooling device located in the tail boom. They were cooled by the intake air and thrown into the rear hemisphere. The use of such cooling made it possible to more fully use the internal volumes of the airframe, as well as eliminate the need to install onboard shielding exhaust devices. 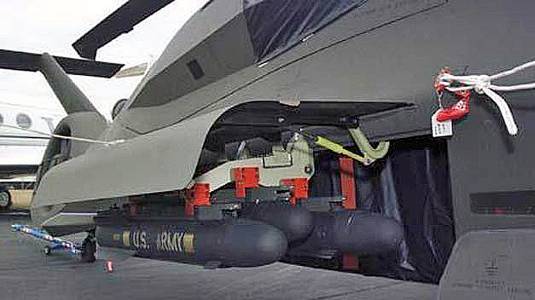 Retractable starboard weapons installation
Due to all these measures, it was possible to significantly reduce the thermal radiation from the helicopter and its exhaust. According to open data, the visibility in the infrared range was reduced by up to 4 times.

A flying helicopter makes a noise that unmasks it at a great distance. This noise consists of the hum of the turboshaft engines and the sound of propellers. In the RAH-66 project, measures were taken to reduce the acoustic signature in flight. 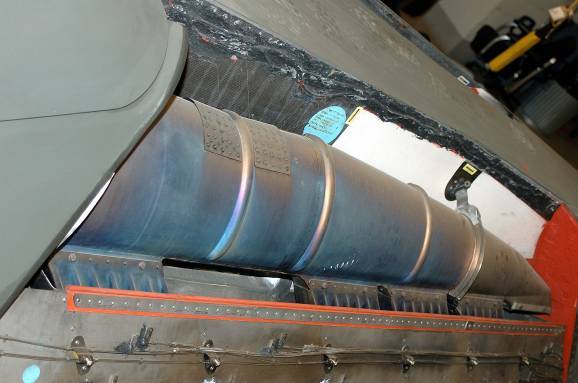 Exhaust duct for gas cooling system
The noise issues were solved by optimizing the design of the propellers. The carrier system, called Pentaflex, received an original hub and a special blade design. They were designed to improve aerodynamics, reduce various vortices and therefore reduce noise - without sacrificing strength. It was also possible to reduce the propeller speed to reduce noise. Similar ideas were implemented on the tail rotor.

At the request of the customer, the LHX / RAH-66 helicopter had to solve several main tasks. It was planned to create a helicopter with the possibility of optical and electronic reconnaissance, as well as capable of striking ground targets and hitting aircraft. All this required the use of a number of new solutions. 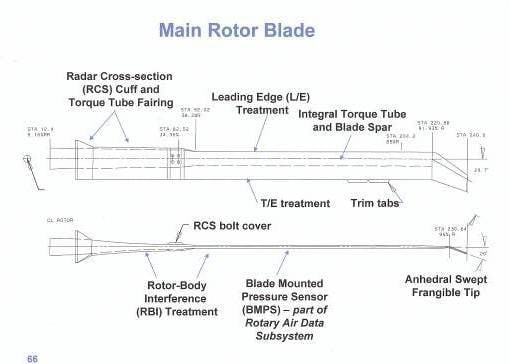 Main rotor blade
RAH-66 received a fundamentally new sighting and navigation system with advanced computing facilities, a "glass cockpit" and a helmet-mounted display system. Integration into promising network-centric troop control contours was envisaged. In the future, the helicopter could receive a radar with an overhead antenna.

To defeat ground targets, it was planned to use AGM-114 Hellfire guided missiles, up to 6 units. on two pull-out units. It was also proposed to use AIM-92 Stinger air-to-air missiles - up to 12 units. If necessary, it was possible to combine ammunition. It was supposed to expand the range by using other weapons, incl. foreign. Detachable outer fenders were developed with one point of suspension on each, which made it possible to increase the ammunition load or add outboard tanks. 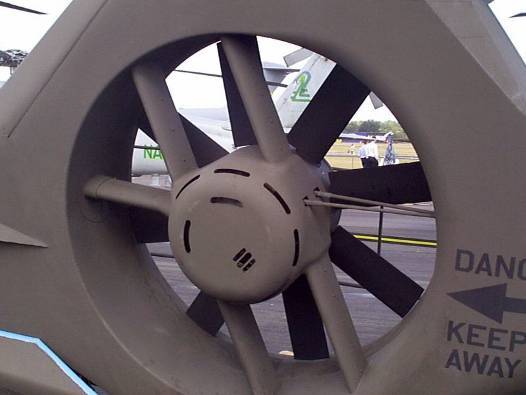 In terms of technical solutions, technologies, etc. the Boeing-Sikorsky RAH-66 Comanche project was and is of great interest. Tests have shown that the helicopter is quite capable of coping with the intended tasks and showing very good results - it was only required to complete the fine-tuning.

However, the project turned out to be too bold and overly progressive, which led to a number of characteristic problems. First of all, the Pentagon and aircraft manufacturers were faced with a delay in work. The LHX program was launched back in 1982, and the experienced RAH-66 was only taken into the air in 1996. The research and design work, as well as the preparation and construction of the prototype, took almost 14 years. Tests and fine-tuning continued until 2004, and during this time it was not possible to solve all the tasks. Thus, the beginning of operation was shifted, at least, to the second half of the XNUMXs. 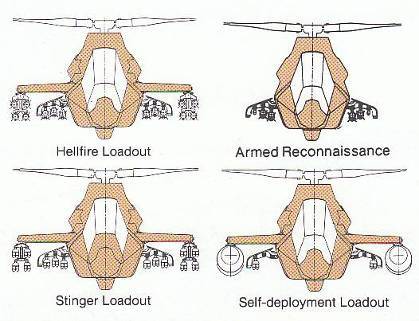 Combat load options with additional outer planes
The RAH-66 project was based on the experience of developing other helicopter technology, but provided for the widespread use of completely new ideas and materials. Some of the new technologies and units had to be developed anew, which required time and money. By the time the work was completed, they managed to spend approx. 7 billion dollars, and the serial production of equipment in the desired quantities required at least 35-40 billion.

Thus, the LHX program and its result in the form of the RAH-66, despite all the advantages and advanced developments, turned out to be too daring for their time and too expensive. The continuation of the project and the immediate use of new technologies in practice was considered inappropriate. 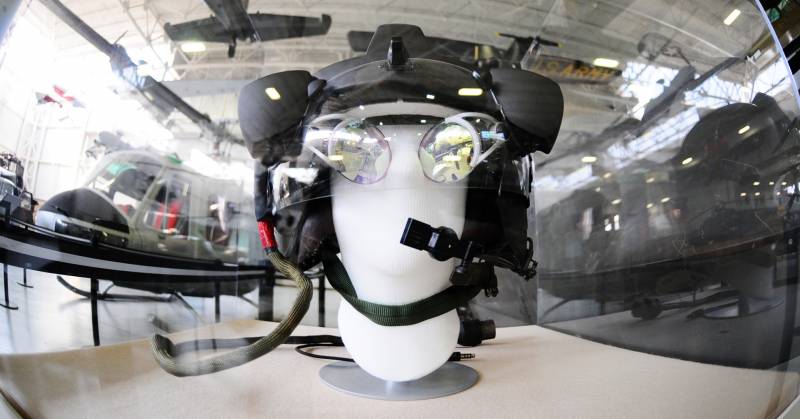 Dear groundwork for the future

It should be noted that the developments on the RAH-66 project, which cost billions of dollars, do not seem to be wasted. Right now, the Future Vertical Lift (FVL) program is underway in the United States, the goal of which is to create new helicopters for various purposes. The Comanche influence is noticeable in the design of the demonstrated samples - issues of visibility are taken into account, advanced developments in the field of avionics are used, etc.

It is expected that helicopters of the FVL program will go into production at the turn of the twenties and thirties and then replace several models in service at once. Thus, a failed project of the past may affect the future. Unless, of course, new difficulties arise, as in the past.