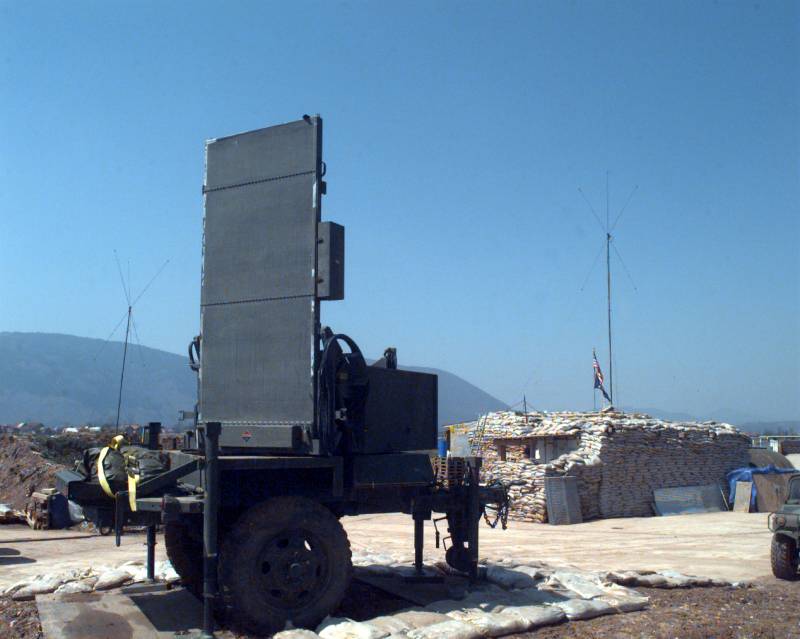 Antenna post of the AN / TPQ-36 Firefinder radar on alert. Bosnia and Herzegovina, 1996

The US Army is armed with several types of counter-battery radar. The main samples of this class are of considerable age, but there are also modern developments. With the help of existing systems, artillery units can identify the location of enemy batteries and carry out a retaliatory strike, as well as record the results of their own fire and make adjustments.

The most massive and at the same time the oldest type of counter-battery radar in the US Army is the AN / TPQ-36 Firefinder. This product was developed in the late seventies by Hughes Aircraft and entered service in the early eighties. The basic version of the AN / TPQ-36 was intended for the ground forces, and the modified AN / TPQ-46 radar was supplied to the Marine Corps. As the operation continued, the plant was upgraded. The last modification is designated AN / TPQ-36 (V) 10.

The radar is built on the basis of a standard two-wheeled trailer M116 and an S250 box-van for mounting on a vehicle chassis of the HMMWV type. The trailer houses the generator, part of the transmitter equipment and the antenna device. The container houses the control post, data processing and communication equipment.

The trailer is equipped with a phased array antenna with 64 transceiver elements with electronic scanning. The work is carried out in the X-band. The station is capable of determining the positions of cannon artillery at distances of up to 15 km, mortars - up to 18 km, rocket systems - up to 24 km. Simultaneously accompanied by up to 99 flying projectiles. 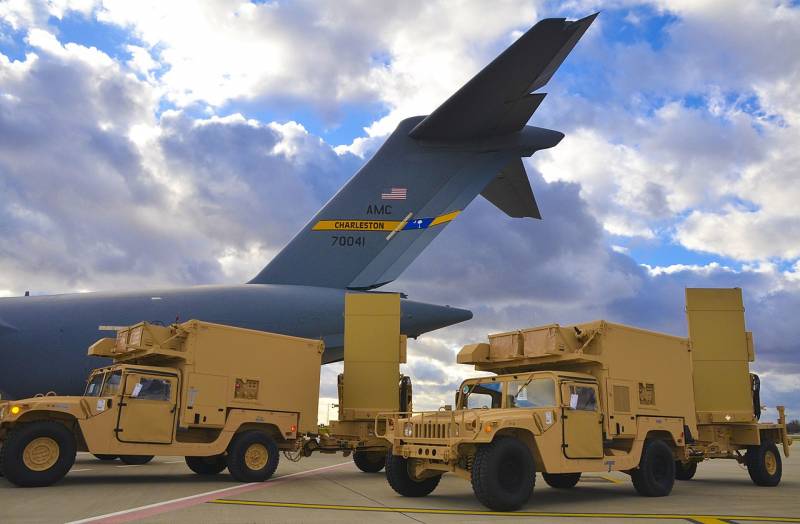 A pair of AN / TPQ-36 complexes transferred to Ukraine, November 2015
According to known data, from the beginning of the eighties, up to 300 radars of the AN / TPQ-36 family were manufactured. First of all, they were supplied to the US Army and the ILC. Also, such equipment was offered for export - it was ordered by almost 20 countries.

The supplies of the stations to Ukraine are of particular interest. In 2015-19. in order to help the United States provided the Ukrainian army with at least 12 counter-battery radars of the latest modification. It was reported about the completion of the supplied equipment in order to somewhat reduce its characteristics. To date, some of the received radars have been lost, both in the course of hostilities and for non-combat reasons.

Also in the early eighties, the Hughes company began production of the AN / TPQ-37 Firefinder radar with increased tactical and technical characteristics. The growth of the main parameters led to the need to use a two-axle trailer for the antenna post and a separately placed generator.

The AN / TPQ-37 operates in the S-band and is equipped with an electronically scanned phased array. Observation of a sector with a width of 90 ° in azimuth is provided. The maximum detection range of projectiles has been increased to 50 km. The radar is capable of tracking 99 objects and providing the necessary data. Modes of searching for enemy batteries and adjusting the fire of their own artillery are provided. 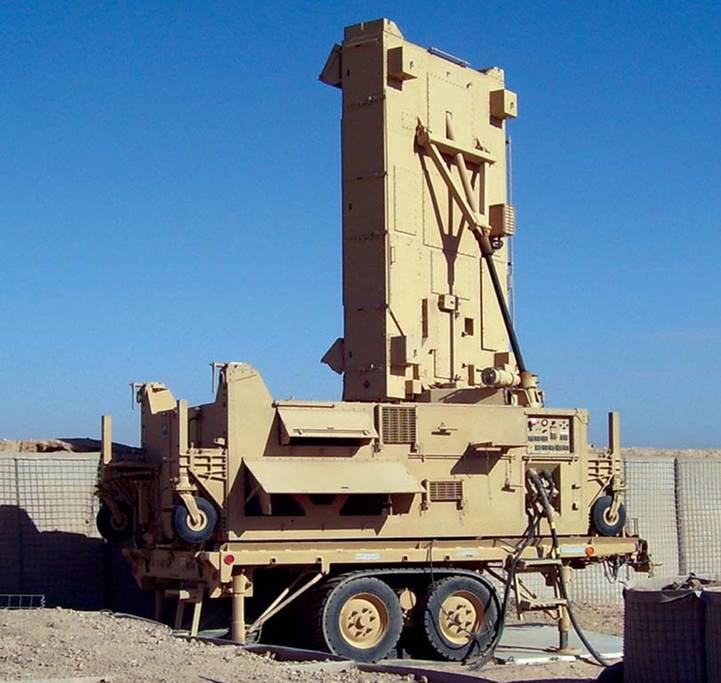 Radar AN / TPQ-37 on duty
The AN / TPQ-37 station entered service with the United States, and then several other countries. Such equipment was deployed at the brigade level in order to complement the AN / TPQ-36 radar and expand the general artillery reconnaissance capabilities. Several years ago, the process of writing off the obsolete AN / TPQ-37 began with the replacement of modern samples. The last radar of this type was decommissioned in September 2019.

In the late nineties, SRC, commissioned by the Special Operations Command, developed a new lightweight counter-battery radar AN / TPQ-48 Lightweight Counter Mortar Radar (LCMR). Later, improved modifications of such a product were created, which received the numbers "49" and "50". With the development of the original design, there was an increase in the main tactical and technical characteristics. So, for the AN / TPQ-50, an almost twofold increase in the detection range is announced in comparison with the base sample.

AN / TPQ-48/49/50 stations consist of an antenna device in the form of a cylinder with curtains, a control panel and power supply equipment. Depending on the placement requirements, the radar can operate on batteries or a generator. A complete set of equipment with its own generator weighs approx. 230 kg, which allows it to be mounted on any standard US Army chassis, although in some cases a trailer is required.

The AN / TPQ-48 radar is designed primarily to search for enemy mortar positions. Work on projectiles with a flat trajectory is difficult. For the latest modifications of the station, the detection range of 120-mm mortars is in the range from 500 m to 10 km. Data on identified targets is automatically disseminated through an automated artillery control system. 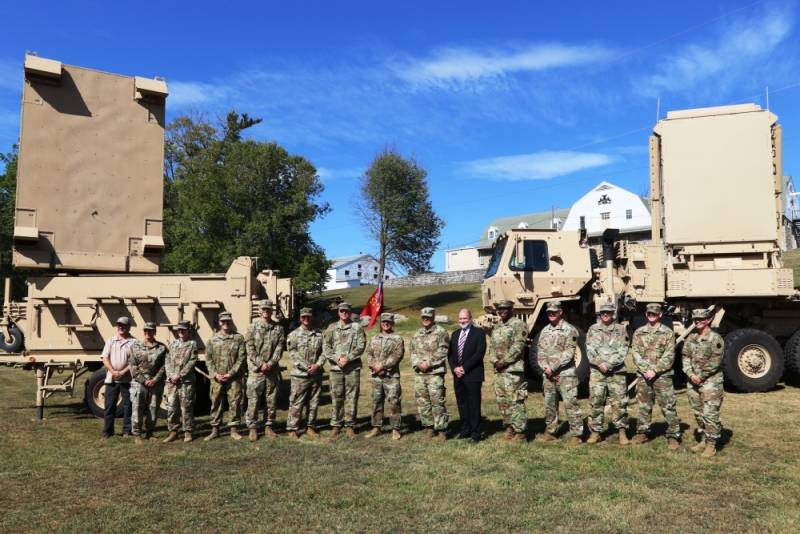 Ceremony of decommissioning the last AN / TPQ-37 combat station (left), which belonged to the 108th artillery regiment of the 28th infantry division of the National Guard Army. On the right is the new AN / TPQ-53 radar to replace it.
The first customer of the AN / TPQ-48 family of radars was the US MTR. At the end of the 450s, ground forces began to order such equipment. The US Army, according to various sources, acquired and received at least 500-48 of these stations. In the future, foreign countries showed interest in American radars. A number of AN / TPQ-49/50/XNUMX from the presence of the American army were transferred to Ukraine. It is curious that some of these items are already out of order.

The US Army is currently making a gradual transition to state of the art AN / TPQ-53 Quick Reaction Capability Radar (QRCR) counter-battery radars. This complex was developed by Lockheed Martin at the end of the 53s and soon entered service. The main innovation of the project was the ability to perform several tasks on the battlefield. AN / TPQ-XNUMX can track not only projectiles, but also low RCS aircraft. Thus, the radar can issue target designation to both artillery and air defense systems.

The AN / TPQ-53 complex includes a pair of cargo chassis with electronic equipment and two generators on trailers. One truck carries an antenna post with a phased array and related equipment, while the other has a command post. The exact characteristics of the detection range of artillery positions, the number of targets tracked, response speed, etc. have not been specified yet.

Several years ago, an improved version of the AN / TPQ-53 radar was developed based on an advanced component base. It differs from the base station in its increased detection range and improved performance on small objects. 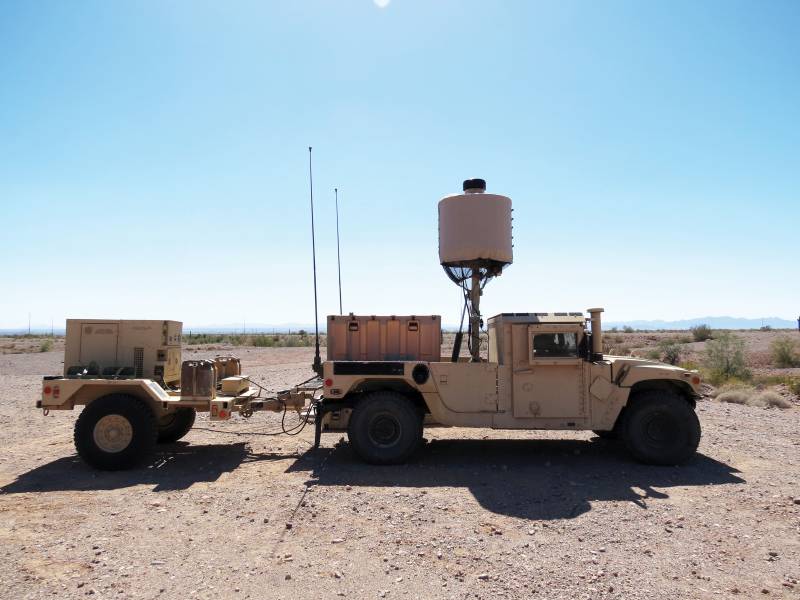 Radar AN / TPQ-50 on a vehicle base. A container for the antenna device is installed in the body of the machine, a generator is located on the trailer
The AN / TPQ-53 tests were carried out in the early tenths. In 2013, the US Army ordered 51 of these. Equipment supplies continued until 2016-17. and allowed to partially replace the outdated Firefinder stations of two types. Then we signed a contract for 170 modernized radars with improved performance. The first serial sample of this modification entered the army in April 2020. Deliveries are ongoing and will take several more years.

The Pentagon is well aware of the importance of artillery reconnaissance means, incl. counter-battery radars. The consequence of this is the process of constant development of this direction. Over the past few decades, it consisted in the consistent modernization of existing stations, and then the development of completely new samples began. There are several major trends in this process.

An important feature of all American counter-battery radars has been and remains the greatest possible strategic and tactical mobility. The equipment is placed on automobile chassis and trailers, which allows them to be quickly transferred to the place of work on their own or using any kind of transport. 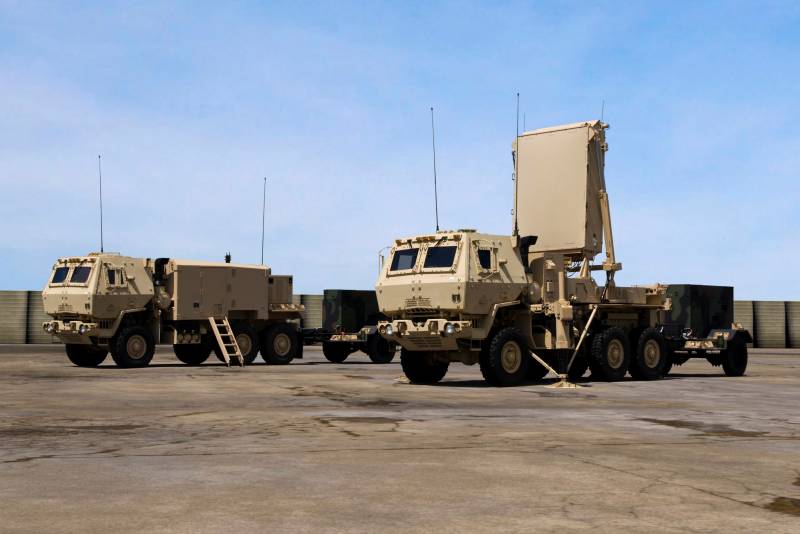 AN / TPQ-53 Station
An interesting idea lies at the heart of the modern AN / TPQ-53 project. Artillery shells and missiles are distinguished by low radar signature, which makes special demands on the characteristics of a counter-battery radar. In a modern American project, it is proposed to use such a potential not only against projectiles, but also to search for light, inconspicuous UAVs. Tests have confirmed the correctness of this proposal, and the US Army now has a universal means of observing the near zone.

Improving interoperability remains an important development trend. Counter-battery radars of the latest models are capable of automatically generating all the necessary data and immediately transmitting them to headquarters or their own artillery. This dramatically increases the speed of the entire combat system and reduces the enemy's chances of evading a retaliatory strike.

Currently, the US military continues to operate all available counter-battery radar stations, but in the future, the fleet of such equipment will change significantly. Thus, the production of modern AN / TPQ-53 systems will replace the outdated AN / TPQ-36. Despite all the modernizations, the latter no longer fully suit the army, and besides, they do not have new functions. Small-sized portable / transportable products of the AN / TPQ-48 family do not yet have a direct replacement and therefore will remain in the army.

Thus, the American army retains and improves its capabilities to combat enemy artillery. In the near future, the units will have to update the material part and master new equipment. Any technical and technological breakthroughs in this area are not yet expected - first, the army must take full advantage of the results of previous projects.