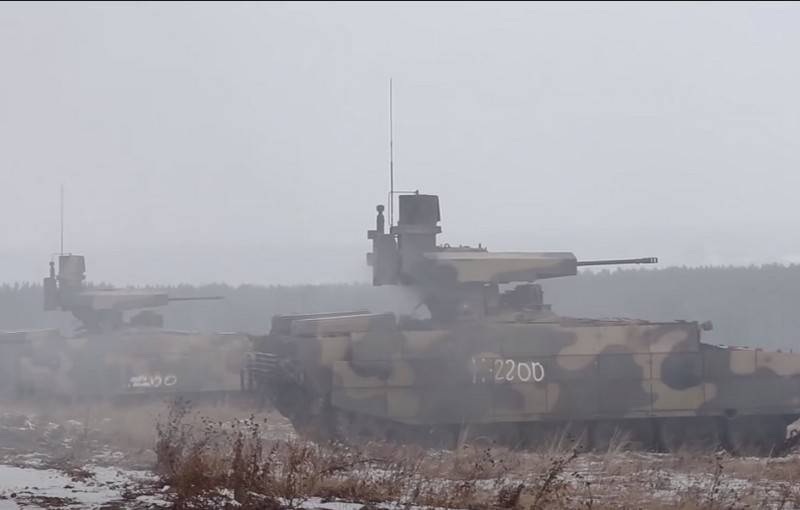 The first stage of testing of a support combat vehicle has been completed in the Central Military District tanks (BMPT) "Terminator". The press service of the district reports.


According to the report, the first part of the experiment on the use of BMPT was completed at a tank range in the Chelyabinsk region. At the first stage, the main attention was paid to the study of control bodies and the weapons system. Assistance in the study of BMPT was provided by the specialists of the manufacturer (Uralvagonzavod - approx.)

During the trial application, which started on December 1, 2020, the crews conducted a series of driving, firepower and technical training sessions
- said in a statement.

The second stage of the experiment, the start date of which has not been named, will be devoted to the use of BMPTs in the battle formations of tank units. Shooting will also be practiced in various tactical situations.

Recall that the first batch of eight BMPT "Terminator" entered the 90th Tank Division, stationed in the Chelyabinsk region, for trial operation at the end of November 2020. Prior to that, BMPT was checked during the "Kavkaz-2020" command-and-control system.

BMPT "Terminator" is made on the chassis of the T-72. The vehicle is armed with two 30mm 2A42 automatic cannons, a 7,62mm PKT machine gun, and four launch containers for the 9M120 guided missiles (Attack complex).
Ctrl Enter
Noticed oshЫbku Highlight text and press. Ctrl + Enter
We are
The first batch of BMPT "Terminator" entered the troops for trial operationNew combat vehicle "Terminator" will be presented in September
Military Reviewin Yandex News
Military Reviewin Google News
66 comments
Information
Dear reader, to leave comments on the publication, you must sign in.