The West is no longer funny. Sputnik V was recognized as a scientific breakthrough 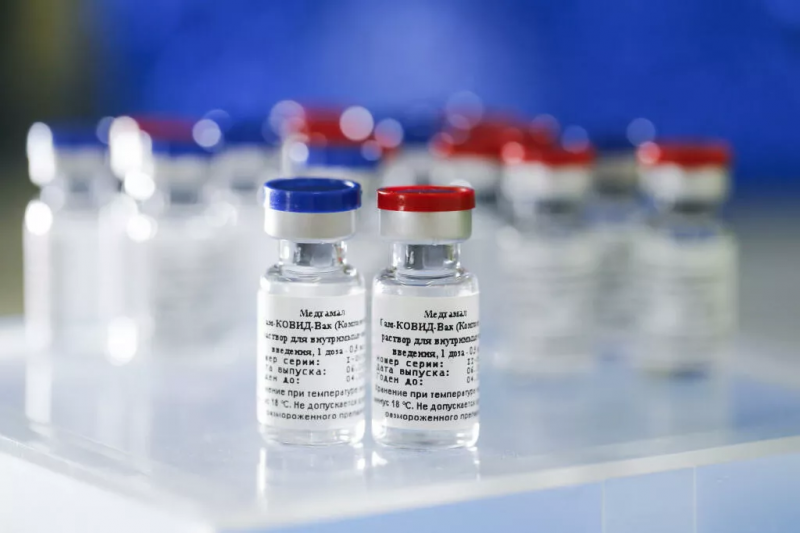 News The publication of the results of the third phase of tests of the Sputnik V vaccine in the authoritative international journal The Lancet appeared just a few days before February 8 - the Day of Russian Science. It is quite a worthy gift and an excellent reason to dispel the doubts of skeptics who always doubt the Russian scientific potential.

Of course, Covid dissidents are unlikely to be impressed by this fact, but for an overly engaged liberal public, Western recognition will be very useful. However, like for other citizens, Russian high-tech is not often praised in world arenas. But first things first.

From the very beginning of clinical trials of the Sputnik V vaccine, there was a lack of clear information about the effectiveness of the drug. I had to take the word of the specialists of the lead developer of the vaccine of the FSBI “National Research Center for Epidemiology and Microbiology named after V.I. Honorary Academician N.F. Gamalei ", as well as the President of Russia, who announced" Sputnik V "the world's first drug of this kind.

In a number of countries, these statements caused at least irony. But on February 2, the British medical scientific publication The Lancet, one of the oldest and most authoritative in the world (founded in 1826), published an 11-page article on the effectiveness of the vaccine.

The lead author of the article entitled "Safety and efficacy of the heterologous primary vaccine COVID-19 based on the vectors rAd26 and rAd5: an interim analysis of a phase 3 randomized controlled trial in Russia" is Denis Logunov, Doctor of Biological Sciences, Deputy Director for Research at the Gamaleya Center.

It should be noted that it is not so easy to publish an article in The Lancet - it requires a special review by leading scientists in the field of research and a carefully calibrated experiment. Judging by the fact that the work of Logunov and several other co-authors was accepted for publication in The Lancet, the design of a study on the effectiveness of the Gam-COVID-Vac vaccine (or "Sputnik V" in Russian) is all right.

Subtleties of the method

The most important thing that can be learned from Denis Logunov's complex multi-page report is that the vaccine has been proven to be highly effective. On average, 91,6% of those vaccinated developed the required dose of antibodies to coronavirus infection in the body.

On the one hand, almost every tenth person vaccinated will be unprotected. On the other hand, Sputnik V is more effective than foreign vaccines from AstraZeneca and Johnson & Johnson.

This conclusion was voiced by MD, director of the Center for Vaccines and Immunotherapy of the Wistar Institute Hildegund Ertl. With regard to severe forms of COVID-19, which can lead to death, the Gamalea Center vaccine generally demonstrates 100% effectiveness. That is, after the vaccine, a person may get sick with coronavirus, but he will not die. 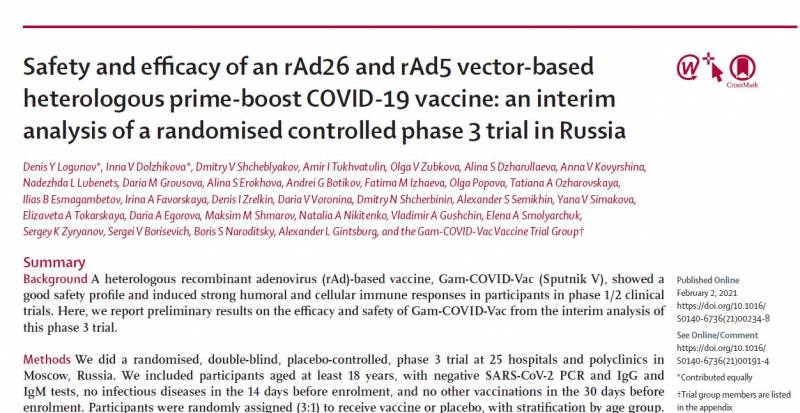 On February 2, a long-awaited article was published in the authoritative international publication The Lancet, which summarizes the results of the third phase of trials of the Russian vaccine. Source: thelancet.com
A little about the details of the international report of the vaccine development group.

The article provides data that make it possible to recommend Sputnik V to people over 60 years old - the effectiveness of vaccination for this age does not practically change.

In addition, the vaccine is very well tolerated by humans - in the course of the study, only 45 vaccinated out of 16 427 indicated side effects that, as it turned out, were not associated with Sputnik V. During the trials, four deaths were recorded - three in the vaccinated group and one in the placebo group.

A small digression regarding the use of placebo in similar studies.

In order for serious scientists to believe in the effectiveness of a drug or vaccine, doctors have to inject a dummy or placebo under the guise of a real vaccine. When evaluating the effectiveness of the vaccine, all comparisons are made with the group that received the "blank" injection.

This is the only way to achieve reliability and exclusion of random factors. It is important, however, that the injecting nurses themselves do not know who is receiving the real vaccine and who is receiving the placebo. In order to exclude, so to speak, information leakage. Often, doctors who distribute vaccines to medical facilities do not even know about this. 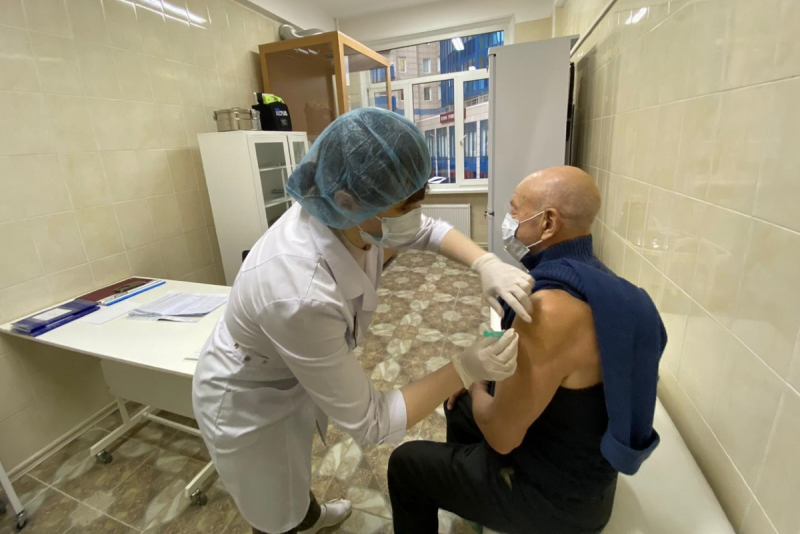 At the moment, about 2 million Russians have been vaccinated. To achieve population immunity, it is required to develop immunity in 60–70% of the population. Photo: vk.com/komzdravspb
Now let's deal with the fatalities after the Sputnik V vaccine.

As it turned out, two subjects died due to cardiovascular and endocrinological diseases, aggravated by the course of COVID-19, or simply from the coronavirus.

That is, the vaccinated died from COVID-19? The epic failure of Sputnik V? This news would be worthy of the hottest news agency headlines, but Denis Logunov explains everything simply in the article.

Most likely, the two unfortunates contracted the SARS-CoV-2 virus a few days before vaccination or even on the day of vaccination. But the latent course of the disease did not allow an unambiguous test for covid.

At the first sign of infection, two people began to take, as the article says, non-steroidal anti-inflammatory drugs without the knowledge of doctors. And this seriously complicated the further diagnosis of COVID-19. Well, concomitant chronic diseases have contributed.

It is not clear only how the doctors examined the volunteers, that they could not determine dangerous chronic diseases in two people.

As a result, two people died from the coronavirus after being vaccinated with Sputnik V. Two more died from causes unrelated to the vaccine and coronavirus.

In total, from September 7 to November 24, 2020, 21 adults took part in the trials, of whom 977 people received the real vaccine, and 16 people received placebo. As the authors note, the vast majority of the volunteers were white, and there were no pregnant women among them. women and children under 501.

This means that new trials await the domestic vaccine in the future.

The West is no longer funny

Compared to its competitors, Sputnik V looks very decent. And this is perhaps the main reason for national pride.

For example, the highly publicized British-Swedish vaccine from AstraZeneca and the University of Oxford collectively yields only 70,4% effectiveness.

Given the cost of developing a vaccine, such a result can hardly be called a success. However, it is now the world's most purchased anti-clot vaccine - contracts for 3,29 billion doses were confirmed at the end of January.

The demand for any more or less effective remedy for COVID-19 is so high that everything is swept off the shelves.

At the same time, the authors of the vaccination from Oxford can guarantee the effectiveness only in seven out of ten people - with Sputnik V, we recall, the effect will be in nine out of ten. But the "Oxford vaccine" or, as scientists call it, ChAdOx1 nCoV-19 (AZD1222) has one indisputable plus - the price.

The Russian Sputnik V will cost $ 10 for a two-component dose, and the British-Swedish counterpart, also consisting of two injections, only $ 4. 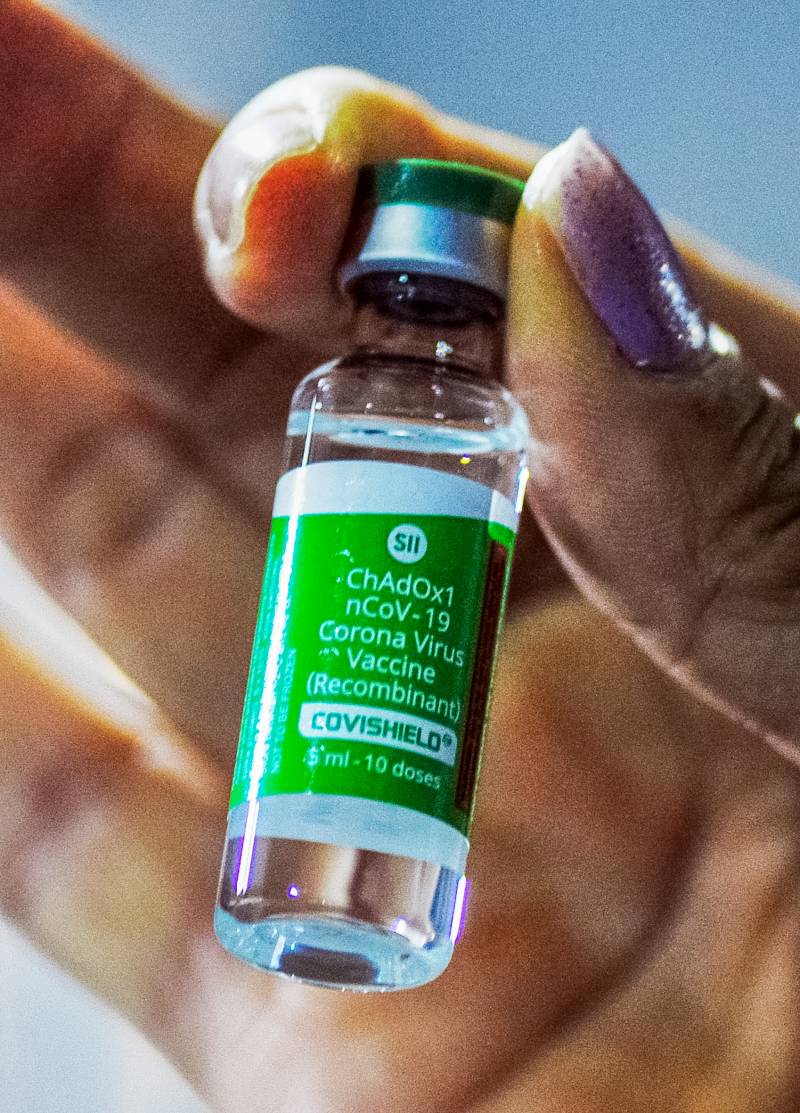 "Oxford vaccine" is noticeably inferior in efficiency to the Russian one from the Gamaleya Center. Source: ru.wikipedia.org
The world has now formed a "golden three" of vaccines, with a proven efficacy of more than 90%.

First of all, this is the BNT162b2 vaccine, developed by Pfizer / BioNTech, which guarantees the formation of immunity in 95%. This development, unique in many respects, requires more careful consideration in a separate article. With such a high efficiency, the Pfizer vaccine is very expensive - it is expected that it will cost four to five times more than the Russian one.

American mRNA-1273 from Moderna, with a proven efficacy of 94,5%, was the second anti-graft in the Golden Three. It is similar in cost to the Pfizer vaccine.

And, finally, the third in the list is the domestic "Sputnik V", which, by the way, is also the most budgetary.

The breakdown by markets is roughly the following - the USA and Canada are served mainly by Moderna, and the European Union - by Pfizer.

Russia, with Gam-Covid-Vak, also actively entered foreign markets, which, of course, are not so solvent, but very capacious - the countries of Asia, Africa and Latin America.

In the very near future, several dozen countries will approve the use of the Russian vaccine. This means that the new Russian export "oil" will be called "Sputnik V".

Historywhen "backward" Russia unexpectedly entered the world's top-ranked COVID-19 vaccine developers, seriously shocked the West. From rhetoric of condemnation and even outright ridicule abroad, they moved to admiration. And even at the level of national leaders. French President Emmanuel Macron has been very positive about the publication in The Lancet. And he did not even rule out the use of "Sputnik V" in the European Union. Incidentally, a very realistic scenario - in the event of a shortage of native Western vaccines, the Europeans will have to consider alternative options.

The foreign press also praised the results of the Russian vaccination tests.

Die Welt almost apologized for the previous criticism. And she noted the justification of such an early registration of the vaccine.

Bloomberg has named the Sputnik V development the largest scientific breakthrough in Russia since the Soviet Union and dubbed the development Moscow's new “soft power” on the international stage.

But the most flattering review of the vaccine came from Russia all the same - the deputy director for scientific work of the Central Research Institute of Epidemiology of Rospotrebnadzor, Corresponding Member of the Russian Academy of Sciences Alexander Gorelov suggested nominating the developers of "Sputnik V" for the Nobel Prize.

And these, perhaps, will be the most worthy candidates in recent decades.

Ctrl Enter
Noticed oshЫbku Highlight text and press. Ctrl + Enter
We are
The case of doctors. US Imposes Sanctions Against Sputnik V Vaccine DevelopersStrangulation: the context, conduct and consequences of the American naval blockade of China
Military Reviewin Yandex News
Military Reviewin Google News
246 comments
Information
Dear reader, to leave comments on the publication, you must sign in.