"To fight skillfully and in a guards way": The key to the city of Vienna is in Ryazan 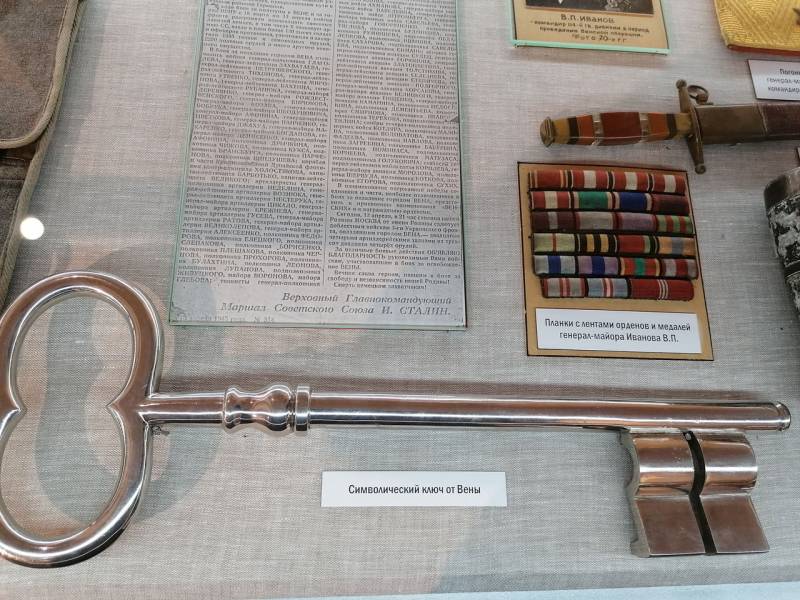 Voennoye Obozreniye continues its series of publications under the heading Museum Exhibit. These are small stories that are dedicated to arms, military equipment, communications equipment, equipment, dual-use structures, which can be found among various exhibitions or in private collections.


In today's story, we will talk about a special exhibit that does not belong either to weapons or to any military equipment. However, this exhibit is very special. This is the key to the Austrian capital - the key to the city of Vienna, which is kept on the territory of the Russian Federation, namely, in the glorious Russian city of Ryazan.

Finding the symbolic key to Vienna in Russia is not easy historical given, it is also a reminder of the results of the Great Patriotic War to all those who are trying to rewrite its history or engage in another kind of defamation of the Victory of the Soviet people over Nazism.

76 years ago, in February 1945, the development of the Vienna offensive began. The Stavka set the date for the start of the offensive on March 15, 1945. The operation was to begin on Hungarian territory, where the forces of two Guards armies (the 4th Guards - at the time of the start of the operation under the command of General Nikanor Zakhvataev - and the 9th Guards General Vasily Glagolev) would deliver a devastating blow with access to positions that would form "Boiler" for the 6th German tank army (SS army).

The final assault on the Austrian capital was extremely difficult due to the fact that the Nazis turned Vienna into a real impregnable fortress - with a huge number of anti-tank ditches, anti-personnel barriers, echeloned defense, mined bridges. Almost any brick building, as noted by the participants in the storming of Vienna, was turned by the German fascist forces into a place for conducting long, protracted, exhausting battles. Literally every basement, every attic was mined, and the small detachments of the Nazis who were there fought with incredible ferocity.

The Soviet airborne groups that were storming the city were faced with the need to overcome the lined barrage lines, often under enemy crossfire.

As a result, on April 13, 1945, the Austrian capital, which was called the "second Berlin" due to the fierce resistance of the Nazis, was completely cleared of Nazi armed formations.

The Soviet command received a symbolic key to the city - the city, which, by the way, eventually remained, so to speak, in the Western sphere of influence. The Soviet Union liberated Austria from Nazism, for which the ordinary Austrians were immensely grateful to the Soviet soldiers. This is to the question that some pseudo-historians today are actively trying to designate the liberation mission of Soviet troops in Europe as "conquest", "enslavement". But the facts speak for themselves, and such facts clearly hurt the camarilla that tries to throw mud at the Soviet feat. 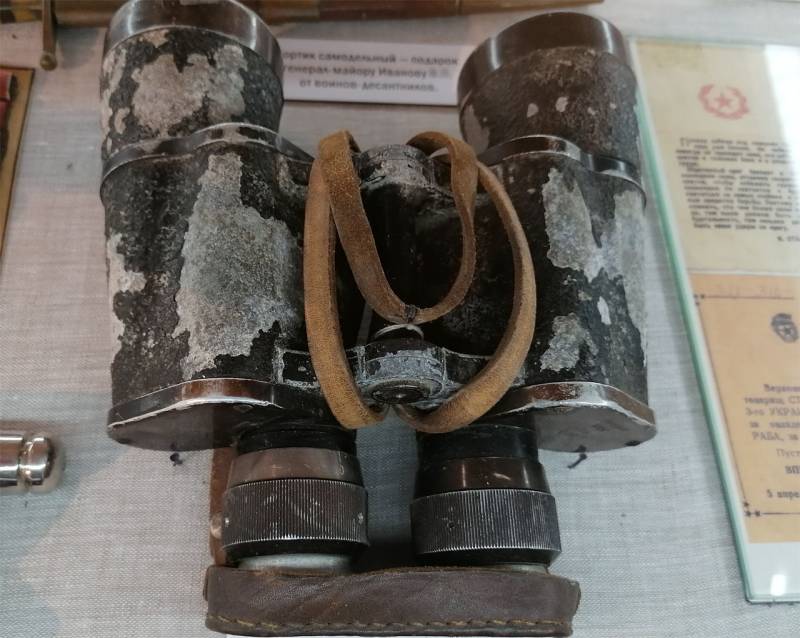 Among the exhibits are the binoculars of General Ivanov, with whom he took part in the Vienna offensive.

From the congratulations of the soldiers of the 3rd Ukrainian Front from the command on the example of the guard corporal N.P. Gargal:

Dear comrade of the Guard, corporal Gargal N.P.! By order of the Supreme Commander-in-Chief Marshal of the Soviet Union, Comrade Stalin, dated April 13, 1945, number 334, gratitude was announced to the troops of the 3rd Ukrainian Front, including you, as a participant in the battles for the capture of the capital of Austria - Vienna. During the battles for Vienna, our troops defeated eleven German tank divisions, captured more than 130 thousand enemy soldiers and officers, destroyed and captured a lot of enemy equipment and military property. The command congratulates you, a participant in these glorious battles, with a high award - the gratitude of Comrade Stalin and expresses confidence that in new battles you will fight just as skillfully and courageously - in the guards style!
Today it should be noted that Austria remains one of the few European countries where the memory of the Soviet soldiers-liberators is carefully preserved. Military graves are under constant supervision, including by representatives of military history clubs and volunteer organizations. And for this I want to say thank you! Especially against the background of the attitude towards the memorials of Soviet soldiers in some other European countries, trying to forget about their own history.