The coup everyone knew about 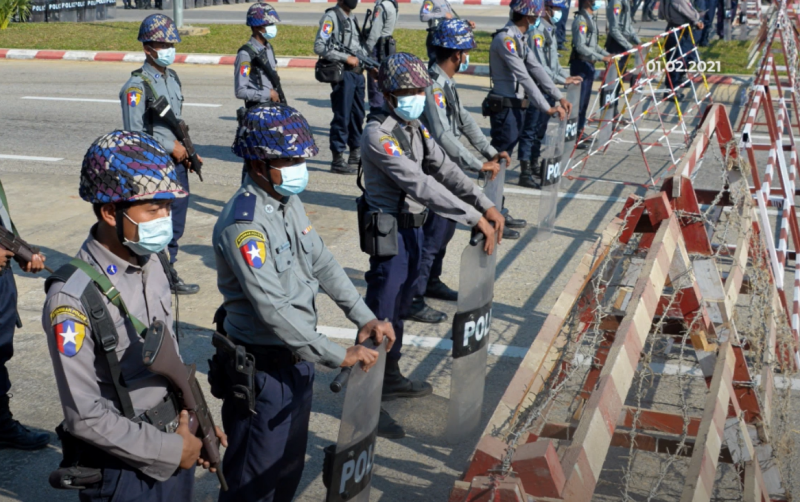 The beginning of February 2021 for the citizens of the Republic of the Union of Myanmar was marked by another change of government in the country. Around the morning of February 1, the military arrested President Vin Myin, State Councilor Aung San Suu Kyi and other leaders of the ruling National League for Democracy Party.


The reason for the arrest, judging by the statement of the military, was interference in the political situation - falsification of the voter lists during the parliamentary elections held in the country last November. The election commission, according to the military, was unable to resolve the controversial issues, unrest began in the country, so they decided to take power into their own hands.

Vice-President Myint Shwe became the acting president of the country. In fact, the country was led by the commander-in-chief of the armed forces of the Republic of Myanmar, Min Aung Hline. The nearly 60 million-strong country entered the state of emergency calmly, without any serious public protests.

"Rake", on which many have already stepped

Did you notice the oddity in indicating the population of the country? "Almost 60 million country"? In some sources you can read about the 53 million country. Simply put, no one knows the exact number of the population. The census was carried out quite a long time ago, and population growth is calculated by approximate figures.

Why it happens? It is worth remembering about stories and geography. The old name of the country is Burma. Myanmar's neighbors are China, India, Bangladesh, Laos, Thailand. All countries are multinational, with many religions and lifestyles. Naturally, Myanmar has not escaped exactly the same problems. Remember the last news from this country. They were somehow connected with religious or ethnic contradictions.

For example, the commander-in-chief of the armed forces of the Republic of Myanmar, Min Aung Hlain, who actually became the head of state, is better known not as an outstanding military leader, but as the organizer of the massacre of Rohingya Muslims in Rakhine state. It was this massacre that caused Muslims to flee to Thailand in 2012-2013.

Any coup must have a reason. It can be invented, it can be real, but it is impossible to carry out a coup without reason and without motivation of the performers. The coup in Myanmar is no exception.

The reason for the coup was the falsification of the voting results in the parliamentary elections in November 2020. Immediately after the resounding victory of the National League for Democracy (NLD) party, led by Aung San Suu Kyi, the military announced the planting of 8,6 million ballots! It was this circumstance that led to the fact that the NLD took 396 out of 476 seats in parliament. The military received only 30 seats.

Doesn't this technology remind you of what happened recently in the elections in another overseas country? The elections have passed and the government-controlled election commission recognizes them. Violations are considered insignificant.

It is impossible to speak unequivocally about the rigging that took place in November. Ultimately, this is the business of the Burmese themselves. However, it is not worth rejecting the arguments of the military immediately. This "rake" has worked in more than one country in the world.

A neat and predictable coup

Quite often I hear the opinion that the military carried out a coup in Myanmar suddenly, and therefore the government could not do anything to protect the legitimate leaders of the country. An interesting opinion, especially considering that the military did not hide the fact that there would be a coup. Even the number to which he was appointed was known from publications in the press.

And it is also worth remembering the recent relationship between the leadership of the Russian Armed Forces and Myanmar. The military was very interested in our weapons and really wanted to buy it. And in the Western media there have already been a lot of critical materials on the relationship between the military and the civilian government of Myanmar. And the reaction of Western governments to the coup was instantaneous.

So why February 1st? The answer is simple. It was on this date that the first meeting of the new parliament was scheduled. And that would mean the emergence of a new legal government. The new parliament at its first session approves the composition of the government! If this does not happen, the government is not considered legal. That's all the arithmetic.

Why it was not possible to interfere with the military is also understandable. Vladimir Lenin wrote excellently about what needs to be done and in what sequence when seizing power. Burmese are good students. The same telephone, telegraph, train stations and so on. In most of the country, the Internet, telephone communications and TV channels were turned off. Only the military-owned Myawaddy television network operated without interruption.

Banks were blocked in the same way. It is clear that in the event of an emergency, the population will begin to feverishly withdraw money from accounts, which will cause chaos in the financial markets. Therefore, the military immediately banned any financial transactions and turned off the ATMs.

At the same time, the owners of shops, cafes and other enterprises that ensure the normal life of the people are obliged to work as usual. As a result of these actions, life in the country practically did not change. The coup turned out to be soft, in the style of South Americans of the late 20th century.

How state leaders reacted to the coup

It is clear that we are primarily interested in Russia's reaction to the coup. The reaction of our Foreign Ministry was quick enough. In the evening of February 1, the official position was voiced by the representative of the Ministry of Foreign Affairs Maria Zakharova:

We hope for a peaceful settlement of the situation in accordance with the current legislation through the resumption of political dialogue and the maintenance of sustainable socio-economic development of the country. In this regard, we drew attention to the statement of the military authorities about their intention to hold new parliamentary elections in a year.
There are about 70 Russians in the country today. All of them are warned about safety measures in case of emergency. They are under constant control of the embassy.

The reaction of Myanmar's neighbors is interesting. Complete calmness and no serious statements condemning or approving the actions of the military. Economic and other ties remain. In short, nothing has changed for the relationship between these countries and Myanmar.

The UN Secretary General on duty condemned the coup and

called on the military leadership to respect the will of the people of Myanmar and adhere to democratic norms, as well as resolve any differences through peaceful dialogue.

The United States took the most active position in condemning the coup. Jennifer Psaki has already noted the next

The US is alarmed by reports that the Burmese military has taken steps to undermine the country's transition to democracy.

By the way, the United States continues to use the old name of the country in its documents - Burma (Myanmar abandoned this name in 1989). It is clear that traditional “terrible punishments” in the form of sanctions have also been voiced.

We are used to the fact that coups are always evil. Perhaps this is our inner confidence in the fairness of the people's choice. However, in the case of Myanmar, I have no such confidence. On the one hand, a crime. On the other hand, this crime was caused by another crime. It is easy to judge from the outside.

I do not think that today Russia should take any drastic steps in relation to Myanmar. A change of power has taken place. But life goes on. The people accepted the new government. Therefore, we just need to carefully understand the situation and only then decide.

Ctrl Enter
Noticed oshЫbku Highlight text and press. Ctrl + Enter
We are
Between the USA and China: Why has Myanmar become a field of competition for the powers?Situational analysis of the death of the MH17 flight (Malaysian Boeing 777), made on the basis of engineering analysis from 15.08.2014
Military Reviewin Yandex News
Military Reviewin Google News
71 comment
Information
Dear reader, to leave comments on the publication, you must sign in.