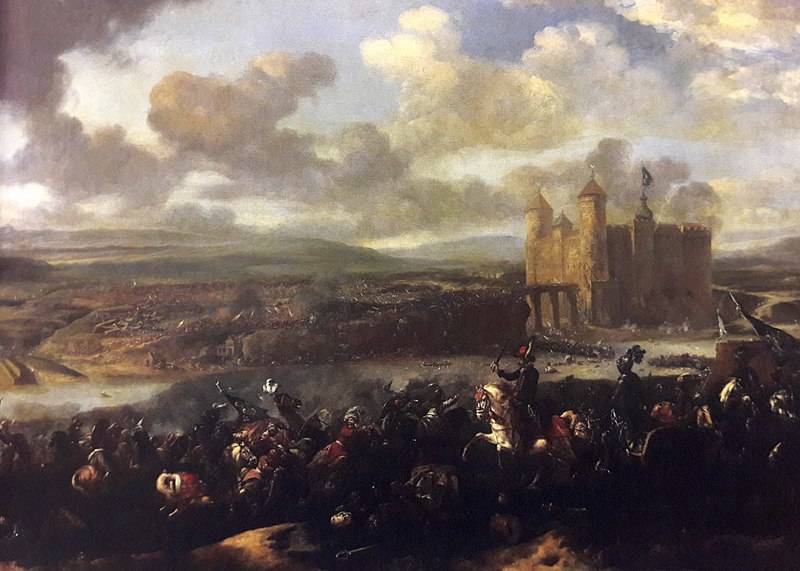 Under the rule of the Ottomans, Ukraine turned into a “wild field”. Podolia was directly incorporated into the Turkish Empire. The West Russian population of the region fell into real slavery. The hetman's rate, Chigirin, became a large slave market at this time. Slave traders from all over the region came here - the Tatars, who felt themselves to be complete masters on the Right Bank, and drove and drove a string of prisoners.

At the beginning of the 1673 campaign, the Russian command expected the Turkish army to march on the Dnieper. However, the Turks did not go after the Russians this year.

The infamous Buchach peace with Turkey caused violent indignation in the Commonwealth. The Diet did not recognize the peace agreement.

The opposition to King Mikhail Vishnevetsky was led by the great crown hetman Jan Sobieski. He was a well-known adventurer who had time to travel around Europe to his heart's content, to serve various monarchs and in various armies.

His wife, the Frenchwoman Maria Casimira de Lagrange d'Arquien (better known as Marysenka), became no less famous. Her father, a French captain, made his way to the favorites of the Polish queen Maria Louise of Neverskaya, added a daughter to her retinue. She became the wife of the magnate Zamoyski, after his death she inherited his enormous wealth. Sobieski became her next official gentleman (in addition to the mass of favorites and lovers). She began to skillfully and energetically promote her husband, using her connections and a lot of money, feminine charm.

Sobieski led the pro-French party in the Polish-Lithuanian Commonwealth. Marysenka went to France to the court of King Louis XIV. And in exchange for help (including the financial one necessary to bribe the electors), she guaranteed the conclusion of a Franco-Polish-Swedish alliance, which was directed against the sworn enemies of the French crown - the Habsburgs.

The national insult stirred the gentry. Warriors flocked to Sobesky. During the campaign of 1673, Poland was able to deploy a 30 strong army.

In early November, the Polish army reached the Khotyn fortress. On November 11, Polish-Lithuanian troops attacked the Turkish camp and fortress in the morning in a blizzard. They were able to break through the enemy defenses in the field camp with a surprise attack and created passages for the cavalry. The hussars went for a breakthrough. The Turks withdrew with a mounted counterattack, but were unable to stop the rush of the heavily armed Polish cavalry.

Panic began in the Turkish camp. Hussein Pasha tried to withdraw his troops to the other bank of the Dniester. However, the only bridge in Khotin was damaged by artillery fire and collapsed under masses of fugitives. Only a few thousand Turks were able to break into Kamenets. The rest of the Turkish army was beaten, destroyed or captured (up to 20 thousand people). The Turks lost an artillery park - 120 guns.

The Poles lost about 2 thousand people. On November 13, the Khotyn castle surrendered with large supplies of provisions, weapons and ammunition. Poland was jubilant, although it was still far from victory. Sobieski's prestige skyrocketed. He was nicknamed "Khotinskiy lion".

Meanwhile, on the way to Khotin, the unpopular king Mikhail Vishnevetsky died. New royal elections were outlined. The gentry rushed home, the army collapsed. Like, the enemies were defeated.

Sobieski refused to go to the Danube principalities, he was the first contender for the throne. Therefore, Poland could not take advantage of its victory, even Kamenets was not recaptured. Polish troops occupied some of the fortresses in Moldavia. The forward detachment occupied Iasi, but soon retreated when the Tatar cavalry appeared.

In the spring of 1674, Jan III Sobieski was elected king. And the Turks launched a new offensive. The crumbling crown army retreated. The Ottomans and Tatars followed, burning and ravaging cities and towns. 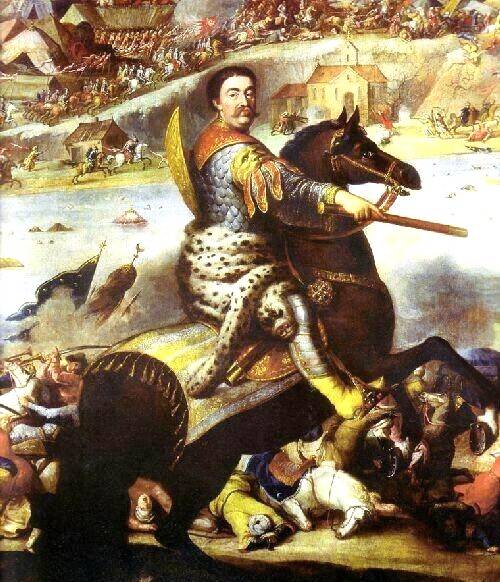 In connection with the defeat of Poland in 1672 and the news of the conclusion of the Buchach peace, the tsarist government took extraordinary measures to defend the Left-Bank Ukraine.

The hetman of the Left-Bank Ukraine Samoilovich asked Tsar Alexei Mikhailovich for early assistance. At the end of 1672, strong reinforcements were sent to Ukraine (primarily to Kiev).

In January - February 1673, the troops of the governor Yuri Trubetskoy (about 5 thousand) approached Kiev. Other garrisons also strengthened: Prince Khovansky went to Chernigov, Prince Zvenigorodsky - to Nizhyn, Prince Volkonsky - to Pereyaslav. Troops were also sent to the Don.

The Zemsky Sobor approved extraordinary fees for waging war. The preparation of the main forces of Russia for the campaign began. Heavy artillery was delivered to Kaluga in the spring of 1673. Three directions of hostilities were outlined: Ukraine, Belgorod zasechnaya line (defense from the Crimeans) and the lower reaches of the Don (new attack of Azov and Perekop). Also, the Cossacks had to attack the enemy in the lower reaches of the Dnieper and in the Crimea.

In April 1673, the commander of the Russian regiments, Prince Grigory Romodanovsky, informed the tsar that an unusually strong flood impedes the movement of troops.

Meanwhile, Moscow learned that the Warsaw Sejm had rejected the terms of peace with Turkey and the Polish-Lithuanian Commonwealth is preparing to renew the war. In this situation, the need to immediately send the main forces of the tsarist army to Ukraine disappeared.

The government limited itself to sending regiments of the Belgorod category. On the other hand, only the Cossack regiments of Doroshenko stood on the Right Bank (they guarded the crossings on the Dnieper, in Chigirin and Kanev), and small Tatar forces in order to support the right bank hetman and the raid on the left bank of the Dnieper. The Turks were stationed only in the Transnistrian cities with the main forces in Khotin.

Therefore, after the resumption of the Polish-Turkish war, the campaign took on an indecisive character. Romodanovsky and Samoilovich in late April - early May made a short raid on the right bank of the Dnieper. They offered Doroshenko and Colonel Lizogub (Kanev) to take the oath to the tsar, but they refused.

Romodanovsky, under the pretext of defending the Belgorod line from the Tatars, returned to the left bank. The troops were withdrawn to Pereyaslav, then briefly to the Belgorod category. Samoilovich's Cossacks are basically dispersed to their homes.

In May, the Crimean horde of Selim-Girey tried to break through "beyond the Line", where weakly defended townships were located, founded after the construction of a fortified line and inhabited mainly by Cherkassians (Cossacks, South Russian population).

First, the Crimeans ravaged many villages that had been founded "beyond the Devil" in the previous relatively peaceful years. Then they were able to overcome the rampart at the Verkhoosenskoye and Novooskolskoye sections. And the horde poured into these districts, and also approached Userd.

But the steppe dwellers did not manage to penetrate far into the territory of the Belgorod category. In the summer, attacks continued, new villages were devastated. It is worth noting that not only servicemen and Cherkassians, but also the Cossacks of Ataman Serko, took part in the fight against the Crimean predators. And Romodanovsky's army sent part of the forces to defend the rampart.

The Russian command tried to distract the enemy with active actions in the Black Sea region. For this in the winter of 1672-1673. built ships of the river-sea class for actions on the Don, Dnieper and on the Black Sea coast. To strengthen the Don near Lebedyan, military men of the Belgorod category (more than 1 thousand people) were assembled under the command of the voivode Poluektov (he had already noted the construction of the ship "Eagle"). They built flotilla from hundreds of small ships, dozens of plows were intended for the sea. By the spring of 1673, they were delivered to Voronezh. Ships were also built in Sich.

In the spring of 1673, the riflemen of the governor Khitrovo (up to 8 thousand soldiers) lowered them down the Don to Cherkassk, built a Ratny town. In August, they, together with the donors of Ataman Yakovlev (up to 5 thousand people), again laid siege to the towers near Azov. A fortification was also laid at the mouth of the Mius. Azov, as well as towers, were not taken. In the spring and summer, Turkish galleys brought in significant reinforcements.

Meanwhile, Serko's Cossacks took Islam-Kermen on the Dnieper in June, and in August they ruined Ochakov and Tyagin. As a result, the Zaporozhye Cossacks made a big noise in the enemy's rear, defeated several important Turkish fortresses on the Dnieper and Dniester. This distracted part of the Turkish-Tatar forces from the Polish front, which helped the Poles.

Meanwhile, under the rule of the Ottomans, Ukraine was turning into a "wild field". Podolia was directly incorporated into the Turkish Empire. Hetman Doroshenko received only Mogilev-Podolsk in the patrimony for his services to the Sultan. All the fortresses of the Podolsk province, except for those where the Ottoman garrisons stood, were destroyed. The hetman was offered to destroy all the fortifications of the Right Bank, except for Chigirin.

The West Russian population of Podillya fell into real slavery. The Turks immediately began to establish their order in the occupied lands. So, most of the churches of the captured Kamenets were turned into mosques, young nuns were raped and sold into slavery, the youth began to be taken into the Sultan's army.

Doroshenko himself had to ask for letters of protection for the churches of his domain. The people were imposed with heavy taxes, and for non-payment they were sold into slavery. The Turks also treated the Cossack allies with contempt, calling them "unfaithful pigs." There were plans to deport the Russians from Podolia with the aim of their early Islamization and assimilation, and their replacement by Muslims.

Doroshenko, under the cover of the Sultan's scimitars, at first felt good. All attempts by the tsarist governors to establish contact with him failed.

The "Turkish hetman" had appropriate assistants. The closest was Ivan Mazepa, who became famous later. More precisely, Jan, a former small Polish gentry. He had an excellent Jesuit education and complete lack of principles, which allowed Mazepa to advance under the hetman and become a general clerk.

The hetman's rate, Chigirin, became a large slave market at this time. Slave traders from all over the region, Ottomans, Armenians and Jews came here. And the Tatars, who felt themselves to be complete masters on the Right Bank, drove and drove the rows of prisoners. The Cossack foreman also did not offend himself and actively participated in this shameful trade. Why be ashamed if wealth itself flows into your hands?

On the other hand, throughout Ukraine, the name of Doroshenko and his henchmen, who brought the "bastard" to the country, caused general curses. The population of the Right Bank was partly captured and sold into slavery by the Turks and Tatars, partly fled to the Left Bank under the protection of the tsarist regiments.

Discontent was ripening among the rank-and-file Cossacks.

They did not want to fight for the "Turkish hetman". 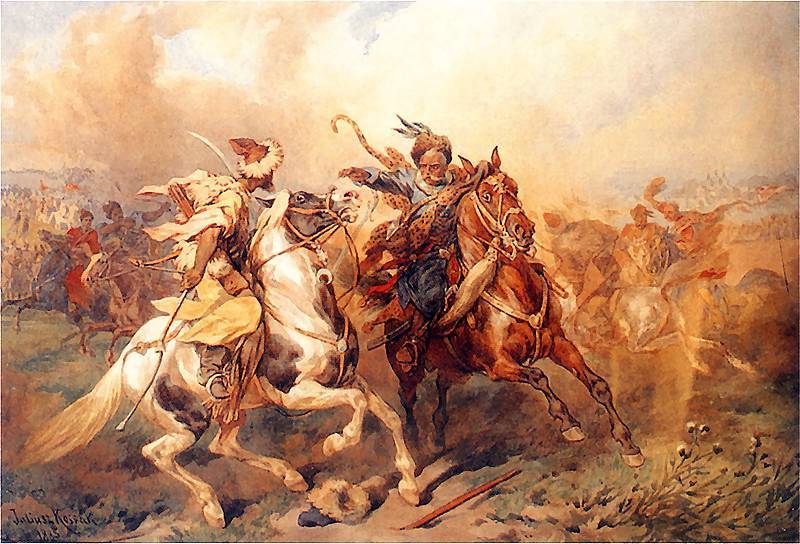