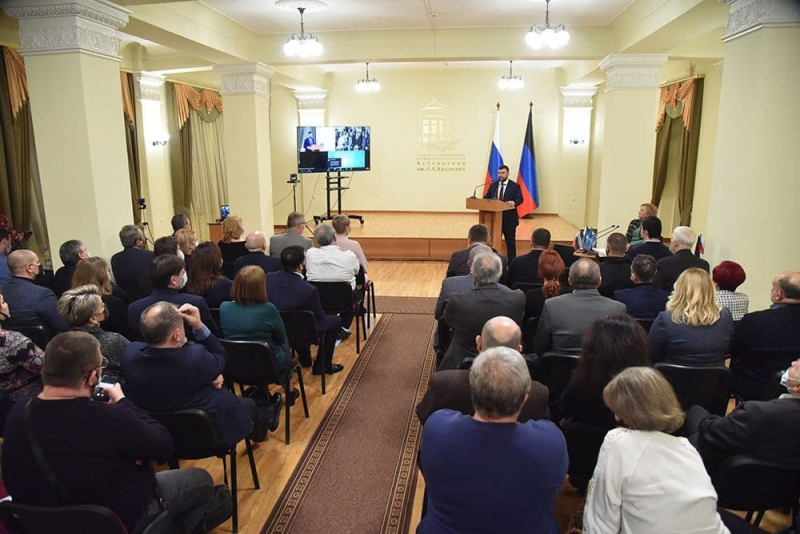 Photo: Administration of the head of the DPR

And again about integration

To frankly admit that I had to write about the Russian Donbass integration forum that took place on Thursday, January 25, after a while, so that the emotions caused both by the forum itself and by the Russian Donbass doctrine would subside. Yes, the event was attended by a number of distinguished guests (honor and praise for this!), In particular, deputies of the State Duma of the Russian Federation Kazbek Taysayev and Andrei Kozenko, editor-in-chief of RT Margarita Simonyan, actor and director Tigran Keosayan, journalist Roman Babayan and others ... Yes, there were quite frank words about the need for the final and irrevocable integration of the LDNR into Russia, and many beautiful arguments about lofty matters. The main thing remained unclear: why the doctrine itself turned out to be frankly weak and indistinct, and also whether any real actions will follow this pompous meeting?

By the way, literally right after the forum, the telegram channel donetsk_donbass, owned by the Ministry of Information of the DPR, distinguished itself, which published a lot of reprises about the “Armenian landing” and everything in the same spirit, which went not only beyond the bounds of decency and common sense, but also Russian legislation on inciting ethnic hatred. Probably, the head of the Ministry of Information Igor Antipov, whose department has recently been actively criticizing the Russian Federation, the visit of the Russian guests seemed an excellent occasion for "jokes".

In general, the main asset of the whole event was, of course, just the emotional speech of Margarita Simonyan, which, even though it was later called “personal opinion,” sounded very touching and once again reminded the inhabitants of the LPR that they are not alone. This, however, limited the tangible consequences of the project (at least for today).

The doctrine of "Russian Donbass" itself was extremely upsetting. First of all, undoubtedly, by the unpleasant fact that three quarters of the document have long been known to all interested persons. historical facts. The fact that Donbass is a primordially Russian region, the injustice of its incorporation into Ukraine and other facts was widely and variedly discussed long before 2014 and an order of magnitude more after the formation of the LDNR. A clear impression is created that the numerous authors of the document, which they began to develop back in the summer of 2020, simply did not come up with something to fill it with, and therefore did not become too zealous. As a result, 30 of a little over 40 pages were filled with what was on the surface. The same applies to the "conceptual" part of the doctrine, which was concocted according to a simple recipe - 50% of memories of the events of 2014 and their causes, and another 50% - general phrases about the all-pervading unity with Russia and the Russian world. In general, the so-called "doctrine" most of all resembles a course project of a not too gifted student.

If you ask whether the whole idea was worth the candle, then the answer is obvious - it was. Even if the very attempt to create some kind of program document failed, the message was good, and thanks to a good buildup in the media and eminent guests, it was possible for a while to return the topic of Donbass to some illusion of relevance. Whatever one may say - but this is in favor of Donetsk and Lugansk, although, of course, it is hardly worth waiting for any fateful shifts. To be honest, all this hype strongly resembles another Chinese warning to Kiev, which is actively trying to rewrite Minsk.

In addition, the doctrine of the "Russian Donbass" helped to finally become convinced of the unpleasant reality - the official Donetsk today is not able to generate new meanings that would explain to the public the sacred meaning of the traumatic reality. It was not even possible to explain, going beyond the outdated media discourse, what exactly happened in 2014, and why all the sacrifices were not in vain. The whole "explanation" boiled down to a set of worn-out cliches, familiar to everyone.

Frankly, there were faint hopes that Donetsk, which has always had a lot of bright minds, will give the republics an explanation, accessible to both the old and the small, of why it is important that Donbass is Russian, and why people are ready to die in the trenches or endure hardships of life for this in the LDNR. Something murderous and whole, like a quotation book by Mao or a catechism, that would give answers to all the main questions, while at the same time clearly defining the local line of values.

However, this work is difficult, responsible and even dangerous - it would be much easier to do with imitation of meanings. There is even a working hypothesis why this imitation was given birth in pain for so long: a lot of people in the government of the LPR are simply unable to answer any of the above questions - they know nothing about it. At least, such conclusions suggest themselves, looking at the anti-Russian and provocative rhetoric of the DPR Ministry of Information, whose leadership surprisingly still occupies its offices instead of regular visits to the investigator.