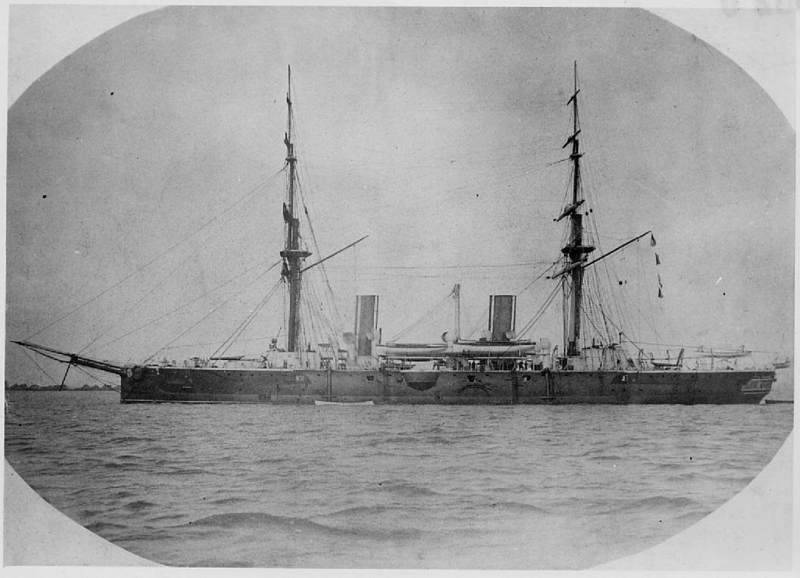 In the photo the prototype is Imperieuse.

According to English sources:

In total, two ships were built: "Imperial" and "Worspite".

The project was considered unsuccessful and did not receive any further development.

The Imperieuse-class armored cruisers were built as defenders of trade and to serve in outlying British naval stations, just like their predecessors.

In addition to the steam engine, the cruisers carried sailing equipment.

Reservations and artillery did not allow performing tasks on a par with battleships, speed and seaworthiness were cruising.

Decommissioned already 20 years after completion of construction. "
There is a book by Arbuzov Armored cruiser "Admiral Nakhimov" about stories life of our clone of the English "Empire", where it is documented how it was designed and built:

“From the report of the Shipbuilding Department of the Marine Technical Committee for 1882.

On the basis of the order of the Manager of the Naval Ministry, drawings (with detailed calculations) and a specification for the ocean battleship were drawn up in the Shipbuilding Department of the Committee on the model of "Imperieuse", but with some deviations from the drawing of the named English ship for the following reasons:

a) As directed by the Artillery Squad - the diameter of the towers for accommodating 9-inch long-range guns was increased by 5 feet against the "Imperieuse" towers, which caused an increase in the weight of the towers themselves by 105 tons.

b) Since the mechanism for "Imperieuse", which has several locomotive-type boilers among its steam boilers, has not yet been arranged and it is not known what the results will be on the test, and meanwhile it is clear from English magazines that the locomotive boilers were on the battleship "Polyphemus" unsatisfactory, the Chief Mechanical Engineer of the Fleet preferred to assign to the battleship the vehicles already tested on the Peter the Great ship, the Elder and Co. systems, with cylindrical steam boilers, which on trial in England and Kronstadt turned out to be quite satisfactory.

It took 8 feet of space along the length of the ship to accommodate these boilers and machines. more than for the "Imperieuse" mechanism.

c) Due to the increase in the length of the engine and boiler rooms, changes in the system of the machine itself, lengthening of the belt along the cargo waterline, changes in the main dimensions of the vessel in order to increase the displacement, the weight of the cargo and the hull increased by 285 tons, and in total, including the increase in the weight of the towers, by 390 tons ".
But there is no answer to the main question - why?

In the sense of why Russia, which does not have overseas colonies, a defender of trade and, calling things by their proper names, a colonial battleship? 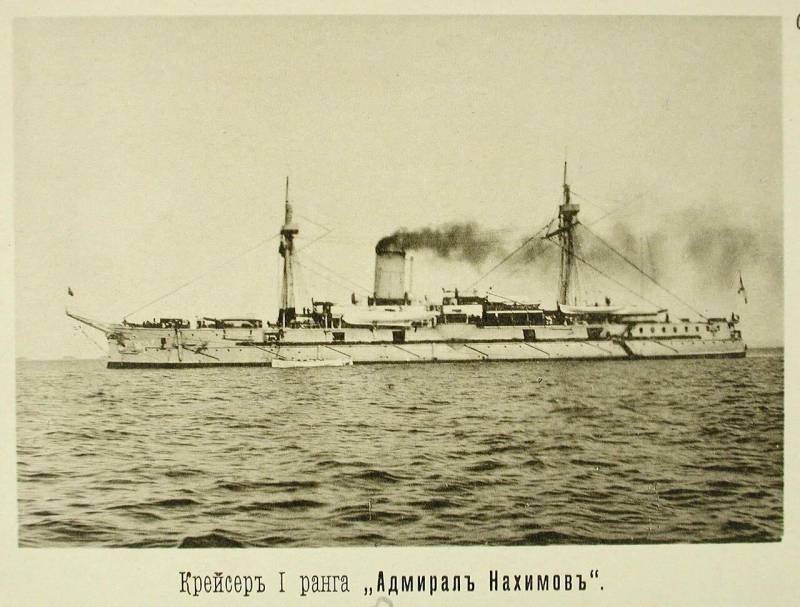 But, again - narrowly on the dog, wide on the cat.

Main battery guns, never turret (as some write), but barbet guns, could work 6 on board, which is not enough in a battle against the EBR. And to get away (from the same EDR "Trafalgar") could not work at similar speeds. Against cruisers, there was not enough speed, against trade - autonomy, the sail of the brig turned out to be an extra load for the bulk of 8 tons of displacement.

As a result, the ship was sent to the Far East to scare the "macaques", at that time still Chinese. The entire service of the ship is endless voyages out of sight: America, France, twice the Far East, where the cruiser took part in suppressing the Boxer Uprising. As a result, by 1902 the picture was sad:

From the telegram of Adjutant General Alekseev Port Arthur on January 9, 1902.

On December 23, during a steam distribution on the cruiser Nakhimov, at a steam pressure of 10 pounds, the main steam pipe ruptured, creating a crack 16 inches long and three-quarters wide.

No one from the team was injured during the pipe rupture.

The technician's commission found the ruptured metal corrosiveness, which reduced the pipe wall thickness by one-sixteenth of an inch, due to sixteen years of pipe service and the lack of a blow-off valve to release water.
Although she did not shine before the previous repair in 1899:

"Nakhimov" cannot be done on the water, because in view of the old age of the hull, I will not dare to do this work afloat, and due to the shaking from the riveting, the waterproofness of the outer skin can be disturbed, and especially after weakening during the absence of the second bottom belts.
The cruiser, which was 12 years old by that time, rusted through. 58 sheathing sheets had to be replaced. The artillery, which at first was thought to be replaced by 4-203 / 45 and 10-120 / 45, also became obsolete. But then they decided philosophically - there was no point in rearming an unsuccessful and extremely worn-out ship.

Easier to build a new one.

As a result, in 1903 the cruiser arrived in the Baltic.

Officially for renovation. In fact, no one really started this very repair until the Russo-Japanese War broke out.

And on the basis of Skrydlov's note, the "formidable" ship was included in the Second Pacific Squadron for fear of the enemy.

The repair took three months. The artillery was not replaced.

And on a campaign, the end of the second armored detachment. That is, as a battleship. The "battleship" by that time could fire a maximum of 42 cables and would accelerate to a maximum of 13 knots.

The Nakhimov survived the daytime battle normally, according to the report of its commander:

From the moment the fire was opened until its termination, the cruiser was showered with shells.

The mass of shells when undershot exploded in the water, and their fragments showered the upper deck, falling into the latter through the gun ports.

Some shells exploded on impact on armor without causing significant damage.

Many shells hit the cruiser at a high angle of incidence and, breaking through the bridges and the upper wooden deck, produced local small fires.

Two of them, of large caliber, piercing the decks, exploded in the battery, one above the 10th 6-inch gun, the other above the galley, injuring people nearby.
Which, however, did not stop in the morning to rescue the team on boats ...

The first fight is such a thing. Kostenko counted 300 hits in Oryol. And then, when the Japanese data appeared, it became somehow uncomfortable. Because a hundred is a shameless overstatement.

In any case, the old cruiser kept going. Shoot. And even slammed a shell into Iwate at 16:20 pm. There were no other eight-inch machines in the squadron.

Distinguished "Nakhimov" and at night. True, only in the officers' reports, according to which they sunk three Japanese destroyers. The Japanese do not confirm this. But I would not even accuse the cruiser crew of lying. You never know what may seem in the heat of the night battle ...

Anyway, the cruiser was torpedoed. And in the morning he sank three miles from Tsushima Island. He fulfilled his role - he diverted some of the enemy's shells to himself.

And for more - another ship was needed.

But the opinion of the "experts" is striking:

"Admiral Nakhimov", even twenty years later, by the beginning of the Russo-Japanese War, had significant reserves for technical modernization and, subject to the replacement of outdated main caliber gun mounts, it was fully consistent with the newest armored cruisers.

He, in fact, became the prototype of the multi-turret cruisers that appeared almost a third of a century later.
Regarding either an unsuccessful cruiser, or a budget colonial battleship - the same British kept their prototypes in Asia. Away from sin. And then they quietly copied.

And our hero appeared in the Baltic only for repairs. And the rest of the time I spent in distant lands. Where the war did not shine.

The only combat operation in the history of the cruiser is Tsushima. But he got there, only because it was pointless to send 2 TOE out of 5 ships of the line. And someone decided to replace quality with quantity.

The rest is derivatives. The crew showed themselves worthy, the place for the old man was determined correctly. (Well, where was he to put it? So at least part of the fire was distracted by himself).

And that the result is such - so there is nothing to copy other people's mistakes.

And the Imperials were mistakes.

Yes, and specific - English. In the sense of a country preoccupied with protecting colonies from enemy cruisers. 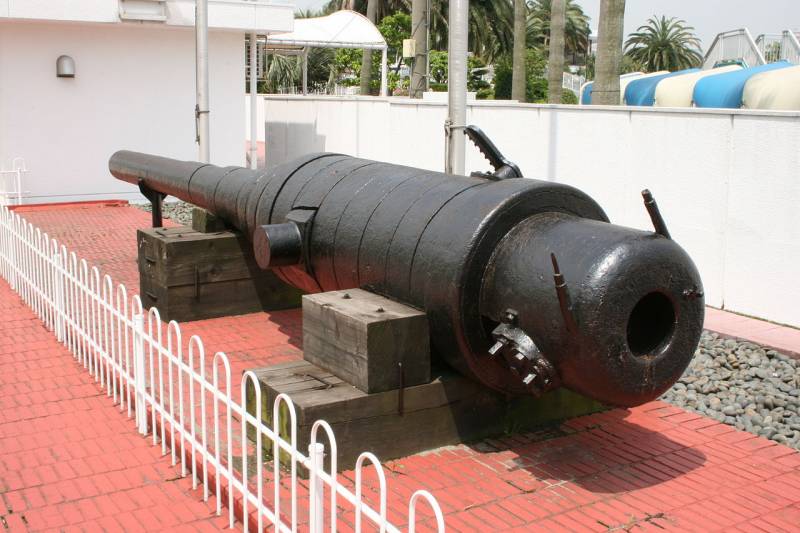 This weapon of Nakhimov is in the museum of the city of Tokyo. And it appeared there thanks to treasure hunting.

"In 1933, the American Harry Riesberg, in his book" 600 billion under water, "said that on board four Russian ships from the 2nd Pacific Squadron, sunk at Tsushima, there were treasures totaling $ 5 million."
Two of them are on the Nakhimov. In 1980, the Japanese examined the ship and found ingots. True, lead. The only money with the ship did not sink:

“I add to this that from the cruiser entrusted to me, at my order, government money was saved in the amount of 1 pounds sterling in English coins, which were distributed for saving and delivery to Russia.

They were created because I did not risk having them in someone's hands for fear that they would be confiscated by the Japanese as prize money. "
And there were far from millions.

In any case, unlike the newest Borodino residents, the handsome Peresvetov and other ships of that era, a particle of the most unsuccessful armored cruiser in Russia can now be examined and even touched.

The only pity is that not in our museums.

We have only Aurora.

Ctrl Enter
Noticed oshЫbku Highlight text and press. Ctrl + Enter
We are
About Stalin and KhrushchevList of destroyed the largest and most high-tech enterprises
Military Reviewin Yandex News
Military Reviewin Google News
49 comments
Information
Dear reader, to leave comments on the publication, you must sign in.