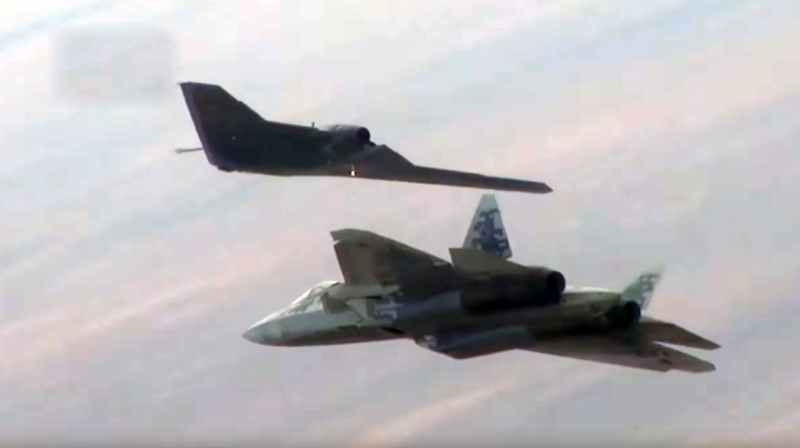 The events of armed conflicts in recent decades have given rise to the idea that UAVs are capable of independently achieving a decisive defeat of enemy troops.

Since the Vietnam War, where UAVs were first used, the scale of their use continued to grow.

If during the first applications of the UAV, only a few units were used, and later - dozens of devices, then already during Operation Desert Storm, the coalition forces made 522 UAV sorties, whose total combat flight time was 1 hours.

The recent armed conflict in Nagorno-Karabakh has become the nightingale of the use of UAVs. In fact, the massive use of shock UAVs became the main feature of this incident.

Based on this, the idea that drones are supposedly capable of independently solving the tasks of an armed conflict gained popularity among a number of specialists.

Beginning in 1921, the Italian military theorist Giulio Douet, in his book Air Supremacy, argued that aviation must play a leading role in the war. And that airstrikes on the state and economic centers of the enemy can lead to victory.

“Anyone who has to fight even the most modern weapons with the enemy dominating the air, he will fight like a savage against the European colonial troops, in the same conditions and with the same chances of victory ",
- confirms his idea Field Marshal Rommel.

Absolute air supremacy during the wars in Iraq, operations in Yugoslavia and other others allowed the US Armed Forces to fulfill their tasks in the shortest possible time, causing irreparable damage to the enemy on the ground.

However, when compared with a comparable manned fighter jet (which starts at $ 100 million) or an AH-64 Apache attack helicopter ($ 50 million or more), small UAVs start at $ 500 (homemade products used by ISIS fighters in Iraq and Syria) and vary up to $ 30 million (for example, for the MQ-9 Reaper).

The average price of a UAV designed according to "military requirements" is 10-20 thousand dollars.

That is, for the price of one manned aircraft, hundreds of combat drones can be purchased. And when you take into account the cost of pilot training, survivability, ground infrastructure and other things, the cost of manned aircraft is even higher.

In addition to the relatively low cost and low costs of their operation, UAVs have a number of other advantages, including the ability to perform maneuvers with overloads exceeding the physical capabilities of a person, and the efficiency of use.

For example, the war in Afghanistan exposed a number of problems with the use of "classic" tactics of air strikes with cruise missiles. It took too long from the moment the intelligence was received until the target was hit. The combat situation had time to change, and the goal was to leave the affected area. UAVs loitering in the combat area were able to transmit intelligence in real time and immediately attack with air-to-surface missiles. In other words, they turned out to be a more effective means of delivering pinpoint strikes.

It is important to note that modern shock reconnaissance drones are able not only to scan a particular territory, but also to highlight and identify all objects and living beings on it.

So on January 3, 2020, an Iranian military leader, commander of the Al-Quds special unit, Qasem Soleimani, was destroyed by an AGM-114 "Hellfire" missile strike. The blow was inflicted on two cars, one of which was Suleimani.

The growing efficiency of drones is evidenced by the fact that all recent local military conflicts do not go without the use of drones. It is already impossible not to reckon with this.

There is no ultimate weapon

However, along with the advantages of UAVs, there are a number of disadvantages that must be paid attention to in order to further develop this type of weapon.

The main disadvantage of the UAV is the vulnerability of remote control systems - any signals received and sent by the aircraft can be jammed, intercepted and replaced. To control the UAV, secure high-bandwidth communication channels are required, which are difficult to organize, especially for over-the-horizon communication.

During the war in Karabakh, the Armenian side temporarily managed to limit the activity of enemy drones in the sky.

According to ex-head of the General Staff of the Armenian Armed Forces Hakobyan,

"The deployment of Pole 21 electronic warfare equipment in Karabakh made it possible to restrict the flights of enemy drones for four days."
Another example of UAV dependence on communication channels is the use of UAVs during the US campaign in Afghanistan.

So, of the eight vehicles available (six MQ-1 Predators and two RQ-4 Global Hawk), no more than two vehicles could be in the air at the same time. And to save the bandwidth of the satellite communication channel, the pilots were forced to turn off some sensors and use a low quality video stream.

In addition, in 2012, scientists from the University of Texas at Austin proved the practical possibility of hacking and intercepting control of a UAV by means of the so-called "GPS spoofing".

At the end of 2008, a laptop with an intercepted video from an unmanned aircraft was seized from a captured guerrilla in Iraq. For video interception, the SkyGrabber program of a Russian company was used.

In addition, despite all the advantages of the UAV, the disadvantage is the low payload of the device with a rather high cost of delivery compared to ground artillery systems.

For example, one 120-mm mortar 2B11 is capable of at a distance of up to seven kilometers in one minute to unleash the same weight of explosive on the enemy as a Bayraktar-type strike UAV. At a cost of orders of magnitude cheaper. And as for the area of ​​destruction (or the possibility of hitting dispersed or concealed targets), the comparison with artillery systems will be completely lost by drones.

Artillery benefits significantly from the low cost of destroying targets. So in conditions of economic feasibility, cheaper types of weapons will always remain.

A good tool in the right hands can do a lot

So why are UAVs so actively used in conflicts in recent decades?

First of all, because of the novelty of the tactics of using this type of weapon.

"Generals are preparing for the last war."
Armenian troops were not ready for this new type of military action.

The neglect of camouflage means on the ground, the absence of serious engineering structures on the line of contact and the accumulation of forces allowed inflicting heavy losses on the Armenian side.

Secondly, this happened due to the lack of opposition to the attacked troops. As in Libya, and in Nagorno-Karabakh, UAVs were used against military equipment of past generations.

At the same time, a properly organized and layered air defense system is capable of neutralizing almost any swarm of enemy drones.

Historical An analogy is the high efficiency of the German Ju 87 Stuka dive bomber at the initial stages of the invasion and in the conditions of achieved air superiority. And also its low efficiency at the end of the war, when these aircraft began to suffer heavy losses due to the growing power of the British and Soviet air forces.

Thirdly, the low cost of using UAVs. The problem of fighting air defense against small UAVs is in the economic plane: how to destroy UAVs with anti-aircraft missiles with an acceptable ratio of "efficiency-cost".

UAVs, being a weapon of the poor, are capable of becoming a strategic tool for the weaker side of the conflict against a stronger adversary.

The future of drones

So what possible countermeasures will states' armed forces develop to counter the drone threat?

First. Development of complexes and programs for detecting, suppressing centers, as well as intercepting control of unmanned systems.

Second. Creation of effective mobile radar and electronic warfare stations for reliable detection of UAVs, as well as equipping units with them at the level of a company tactical group.

The third. Design of new and modernization of existing types of ammunition to destroy UAVs. At the tactical level, a brigade-battalion is used by "small missiles" against UAVs and long-range (about 40 km) missiles for short-range air defense systems.

At the tactical level, a company-platoon - equipping troops with weapons and ammunition for "short-range self-defense" (shells with remote detonation, large-caliber machine guns).

Development of fundamentally new types of weapons and ammunition - based on a pulsed flow of radio frequency electromagnetic radiation (sources of directed radiation, converters of an explosive into an electromagnetic pulse).

Accordingly, the development of UAVs for parrying these calls may go in the following directions:

1. Combining UAVs into complexes, where each device performs its role under general guidance.

3. Development of methods and algorithms of collective behavior (swarm tactics).

4. Creation of algorithms for independent behavior (artificial intelligence programs, where the system itself, after receiving a problem, autonomously chooses ways to solve it without external human control).

5. Protection of communication channels for control of unmanned systems (development of new methods of data transmission).

The era of highly mobile systems with artificial intelligence and included in a single network that can simultaneously control equipment and army units on the battlefield is coming.

And ignoring this fact can be costly in future conflicts.

Ctrl Enter
Noticed oshЫbku Highlight text and press. Ctrl + Enter
We are
Interview of V. Putin to Channel One and the Associated Press AgencyWhat you didn't want to know about England
Military Reviewin Yandex News
Military Reviewin Google News
38 comments
Information
Dear reader, to leave comments on the publication, you must sign in.