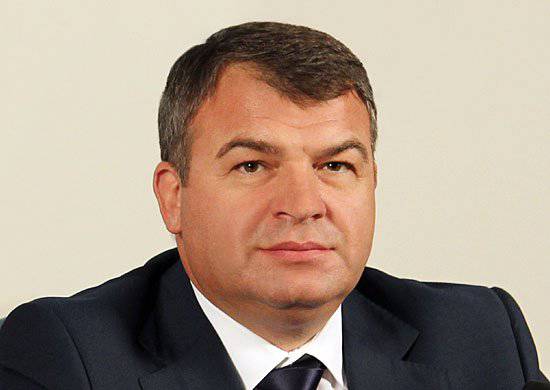 Subcommittee on Security Issues of the Russian-Ukrainian Interstate Commission.

During the joint work, the parties discussed a wide range of issues on cooperation in the military sphere.

According to Anatoly Serdyukov, the most "important activities are the improvement and expansion of forms of military and military-technical cooperation, joint operational and combat training."

So, it is planned that about 170 Russian and Ukrainian enterprises will participate in the implementation of the currently developed military-technical cooperation program, calculated until 2017. This program is designed to promote the development of mutually beneficial ties in the creation, modernization, repair and disposal of weapons and military equipment. It was noted that part of the technical issues related to the disposal of ammunition and military equipment of the Black Sea fleet already resolved.

Plans for the creation and production of the An-70 military transport aircraft, which is currently undergoing flight tests, are being successfully implemented.

The meeting participants also discussed the prospects for the use by the Russian side of the NITKA takeoff and landing systems training ground, designed to prepare the deck crew aviation. As a result of joint work on this issue, the heads of the military departments of the two countries signed an intergovernmental protocol providing for the resumption of negotiations on a long-term lease by the Russian Ministry of Defense of this training ground.

Cooperation in the training of officers for the Ukrainian Armed Forces is developing dynamically. Since September 1 in military schools of the Russian Ministry of Defense, 35 representatives of the Armed Forces of Ukraine will be trained free of charge and in the future it is envisaged the possibility of increasing the recruitment of Ukrainian citizens to Russian military colleges.

As examples of the productivity of work to improve operational and combat training of the troops, joint training and combat activities such as the World Fairway-2012 and Slavic Commonwealth-2012 exercises were noted. According to Anatoly Serdyukov, the Russian side is ready to receive Ukrainian observers at the exercises of the Western Military District.

The meeting also reaffirmed the readiness to cooperate in the fight against piracy. For this purpose, a corresponding draft of an interstate agreement is being prepared, regulating cooperation in this direction.

Anatoly Serdyukov, assessing the results of the meeting and the activities of the Subcommittee and its core subcommittees as a whole, noted that "at present it is a consistently functioning decision-making mechanism, as well as monitoring their timely implementation."

At the same time, he said, "the main thing is that there is a frank and constructive dialogue." “This, in turn, provides an opportunity not only to negotiate on various aspects of bilateral cooperation, but also to actively develop multilateral partnership,” said the head of the Russian military.

In turn, the Minister of Defense of Ukraine Dmitry Salamatin noted that "today's meeting has shown an example of a pragmatic approach to solving common problems, showed the confidential nature of relations between the defense departments of the two countries."