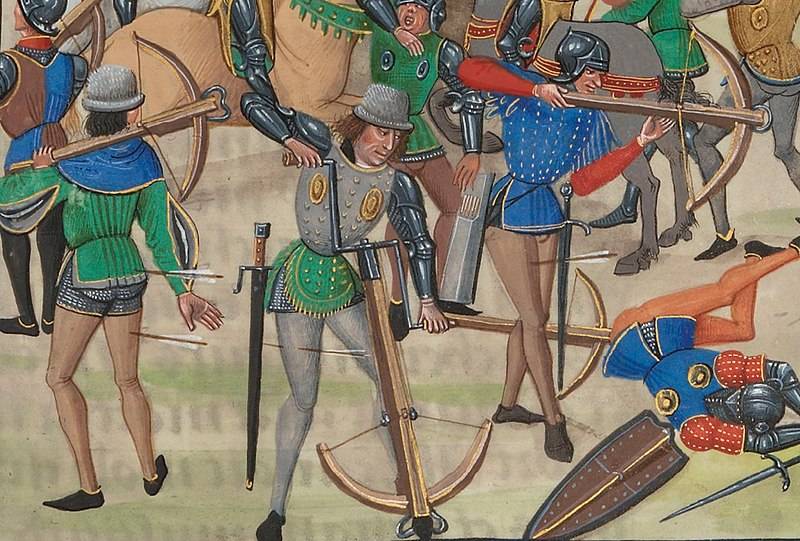 Jean Froissard (1337-1410). Crossbowmen at the Battle of Crecy. National Library of France

Bahram was skillful in all arts.
He galloped off with a quiver, a crossbow.
A rider rushed after another couple,
And in cross-fire - a simple pebble.
"Shah-name" Hakim Abulkasim Ferdowsi. Translated by S. I. Lipkin
History firearms weapons. We often think that the development of any phenomenon occurs sequentially. And the same was true of the history of firearms. That at first there was a bow, then it was replaced by a crossbow, then a firearm came to replace it. However, in this particular case it was not at all the case.

Both the crossbow and spark ignited firearms reached their perfection almost simultaneously. Another thing is that the development of the crossbow has slowed down for a number of reasons, but firearms have changed incrementally.

Nevertheless, in 1550, both crossbows and rider's wheel pistols were approximately equal in their perfection, difficulty and combat characteristics. And in the future, crossbows continued to be used for a long time on hunting. And today we will tell you about how this happened, as well as about the latest and most advanced crossbows that existed in parallel with the match and wheel systems of small arms. 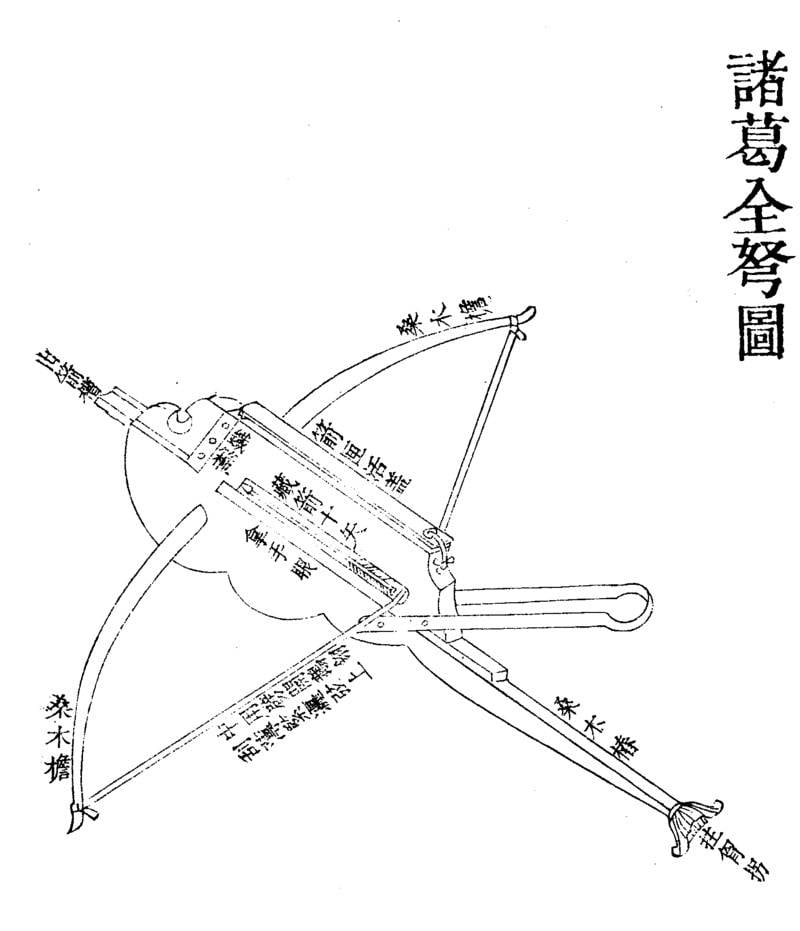 Chinese multiple-shot crossbow of the Ming dynasty. Illustration from the Chinese Encyclopedia, c. 1700-1725

In 500 BC. e. The Chinese Sun Tzu in his work "Art of War" mentions powerful crossbows, which are easel bows.

From 400 BC e. Greeks use a crossbow - gastraphet. 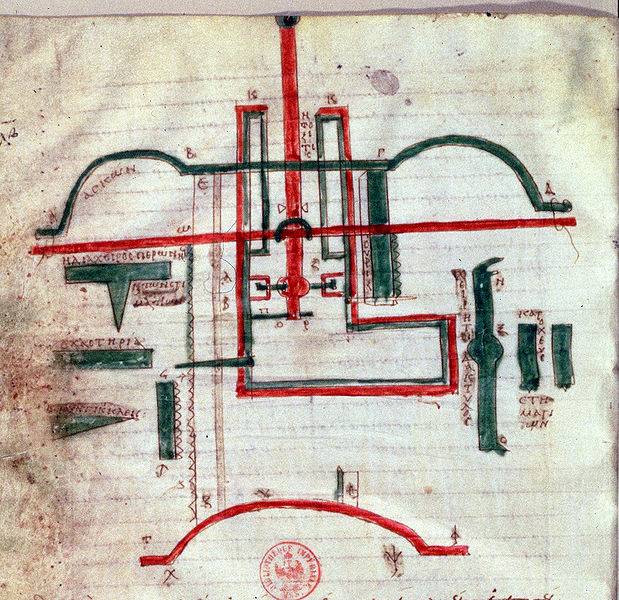 Gastraphet of Hero of Alexandria. Drawing from the codex manuscript "Farisin" with additions in Greek. National Library of France

In the period from 206 BC. e. to 220 A.D. e. The crossbow becomes the common weapon of the Han Dynasty warriors and hunters.

About 100 A.D. e. in China, multiple-shot crossbows are already in use. The Romans (in the era of the empire), and then the Byzantines, knew the crossbow under the name Solenarion, but it was not widely used by them. Even the Picts knew and applied it.

And in 1100 he was already widely known in Europe. In 1139, Pope Innocent II forbids the use of a crossbow against Christians. 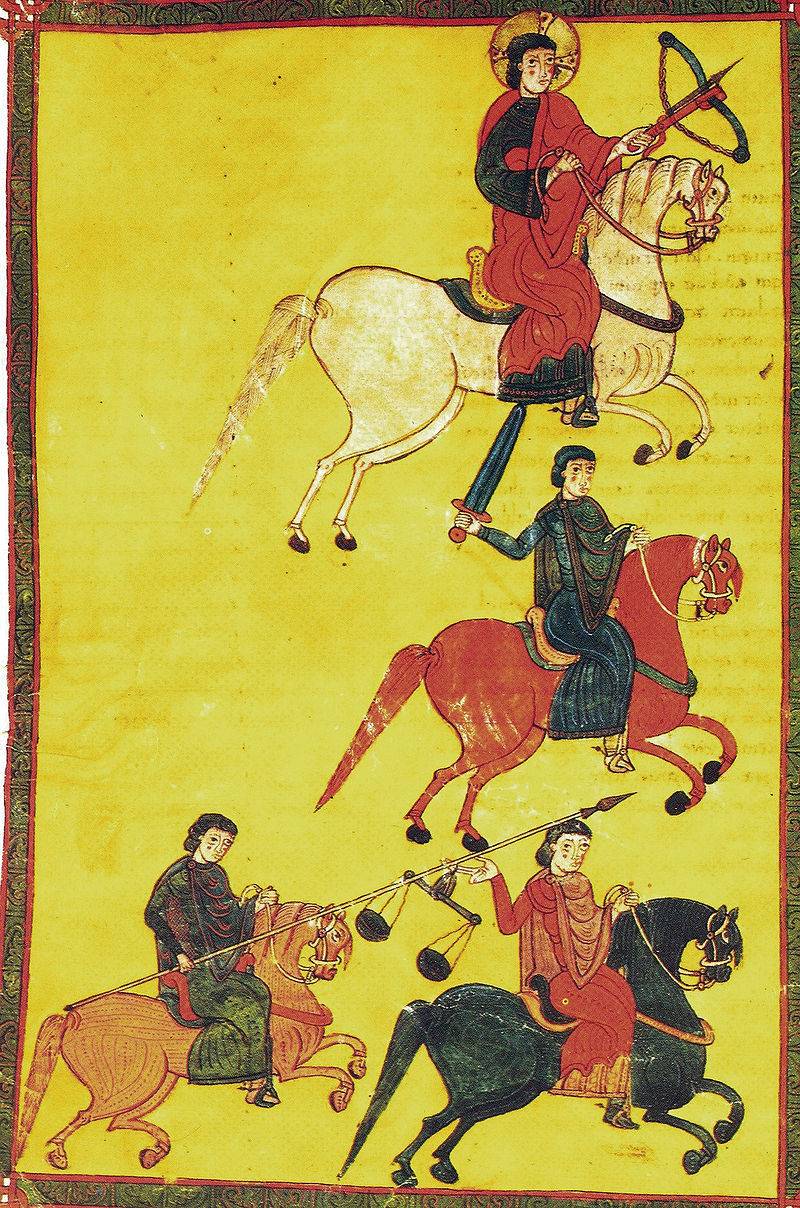 The earliest depiction of a rider with a crossbow is from a Catalan manuscript of 1086. The miniature shows the four horsemen of the Apocalypse. Archive of the cathedral in the city of Burgo de Osma Ciudad de Osma, Spain
In 1199, Richard the Lionheart, an ardent champion of crossbows, was mortally wounded from a crossbow during the siege of the castle of Shalyu in Aquitaine.

At the end of the XNUMXth century, the longbow supplants the crossbow in England, but in continental Europe the crossbow is still popular.

At the beginning of the XIV century, crossbows with bows of steel appeared. 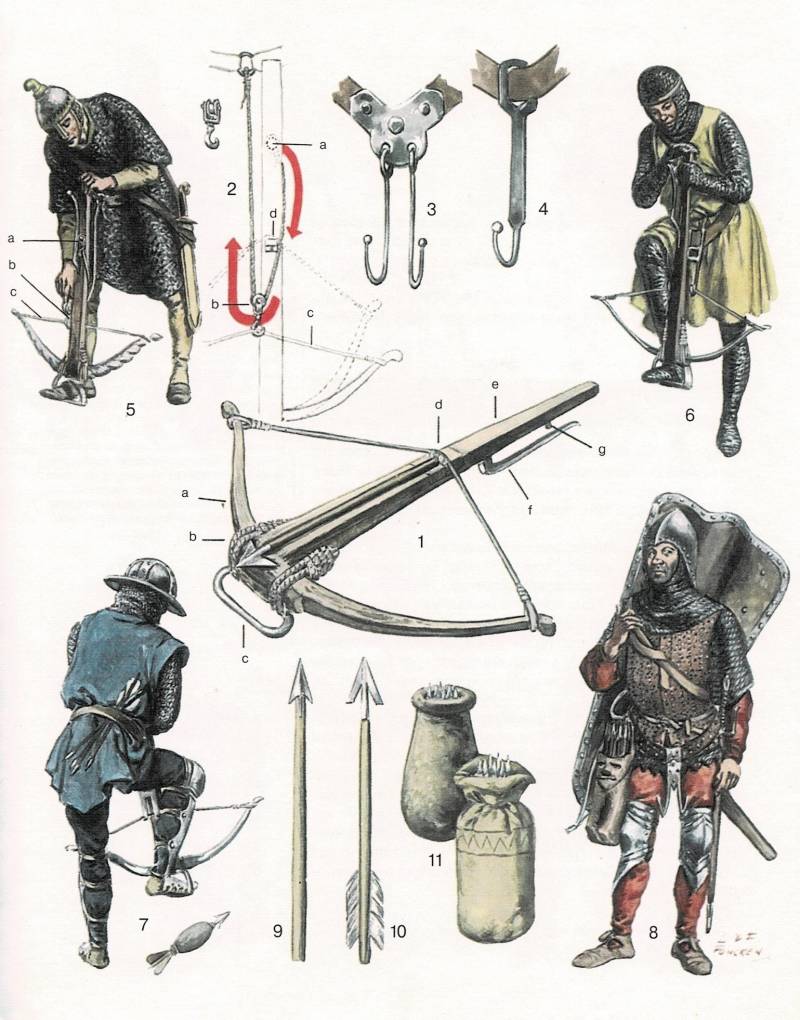 Crossbowmen XI-XIII centuries. In the very first European crossbows, the string was pulled by hand. But already the Anglo-Norman crossbowmen of the XII century used the simplest block for this (5). Belt hooks were also used for tensioning (3, 4). With their help, inserting his leg into the stirrup, the crossbowman pulled the bowstring with his foot (6, 7). The XIV century crossbowman's equipment (8) was rather cumbersome, since it necessarily included a pavese shield. Arrows were used both feathered (10) and unfeathered (9), and even incendiary (7). In general, the crossbow has long been a very simple device (1). Illustration from the book by Liliana and Fred Funkenov “Encyclopedia of weapons and military clothing. Middle Ages. VIII-XV centuries: Armor and weapons. Fortresses and siege machines. Knightly tournaments and emblems. M .: Astrel, 2002, p. 125 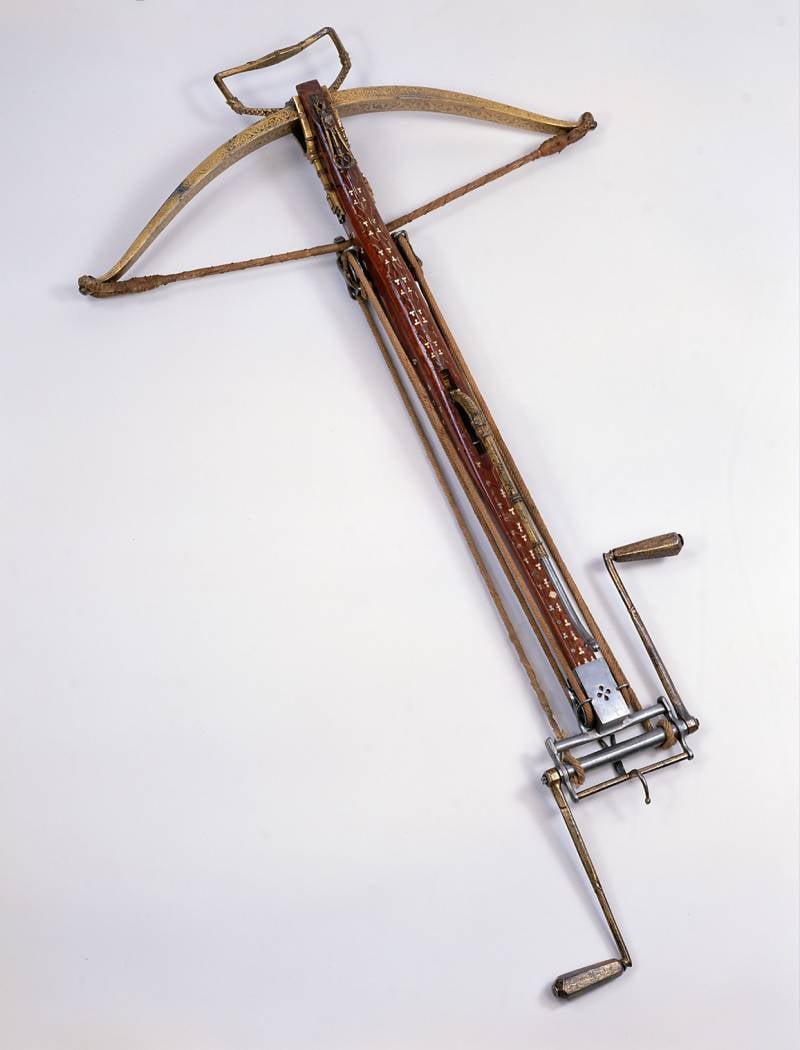 A hunting crossbow with a four-wheeled cable winch that allows very strong tension on the crossbow. Made between 1499 and 1514 Such crossbows became widespread during the Hundred Years War. Well, and later were used as a hunting weapon. Kunsthistorisches Museum Vienna, New Castle, Court Hunting and Armory

Surprisingly, such crossbows have been in use in England for a very long time. Here we have a crossbow with a winch from 1700-1799. Royal Arsenal, Leeds 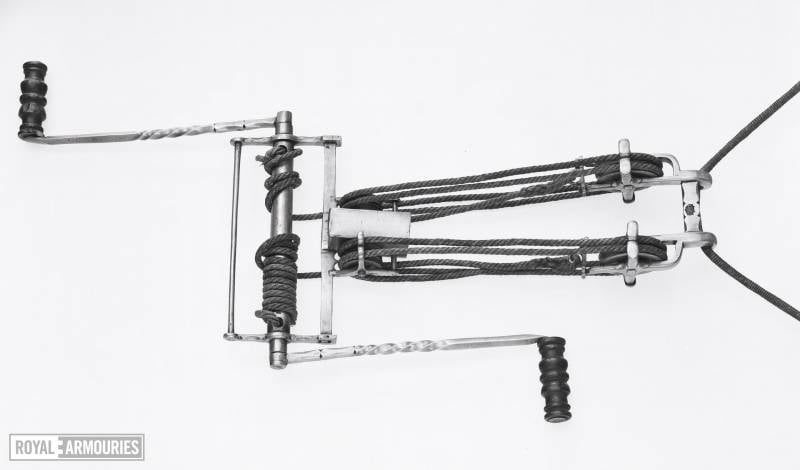 And this is how the winch itself is arranged. Made in 1631-1670. Royal Arsenal, Leeds
In the XIV-XV centuries. The crossbow becomes the standard weapon of choice for French and Flemish citizens defending their cities. In 1521-1524. crossbowmen actively participate in the campaigns of the conquistadors Cortez and Pizarro in the New World. 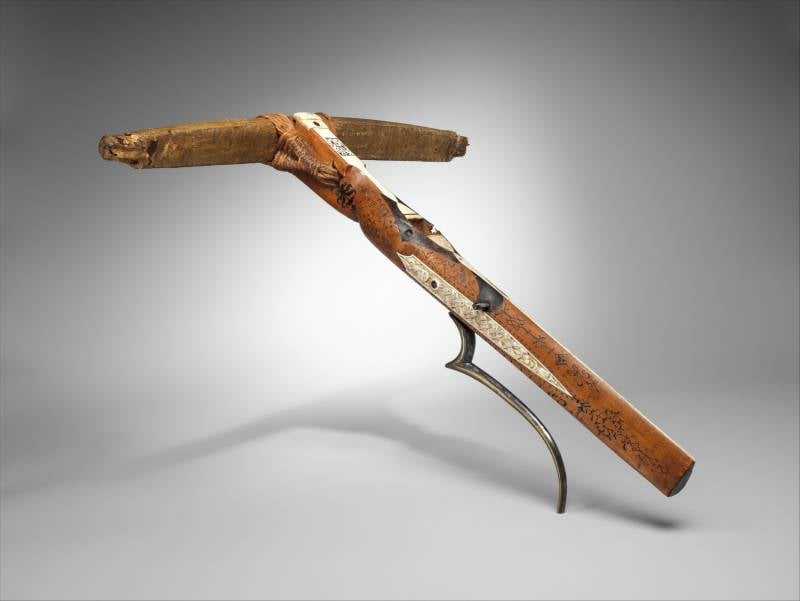 Crossbow of Count Ulrich V of Württemberg (1413-1480), dated 1460. Attributed to Heinrich Heid von Winterthur, probably a Swiss. This is the earliest known dated crossbow in existence. It depicts the coats of arms of Württemberg and Savoy, which belong to its owner, Count Ulrich V of Württemberg (1413-1480) and his third wife, Princess Margaret of Savoy (1420-1479). Above the trigger is a German blessing written in Hebrew letters. This is a rare and early example of Hebrew writing on a personal item intended for a Christian sovereign. It can be translated as "Take care of God and be generous!" or "My God, good!" Material: wood (European hornbeam), horn, animal sinew, antler, birch bark, iron alloy, copper alloy. Dimensions: length 71,2 cm). Weight 2 g, Metropolitan Museum of Art, New York 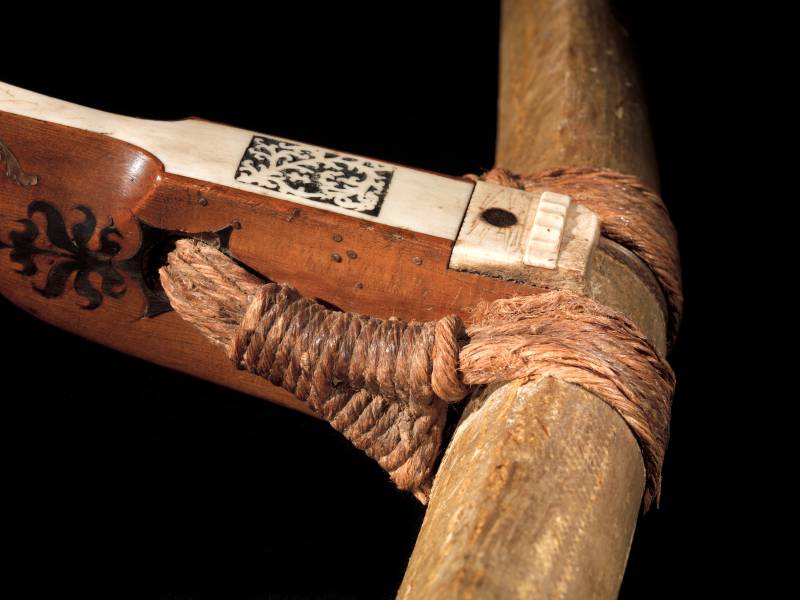 Attaching a bow to this crossbow. Metropolitan Museum of Art, New York 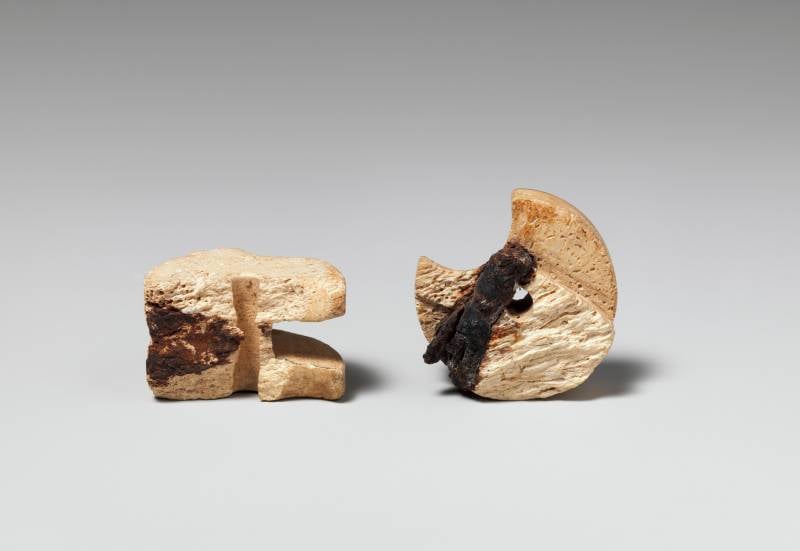 "Nut" - the main detail of the trigger mechanism of the crossbow, before 1272 Weight 8 g, Metropolitan Museum of Art, New York
Traditionally, the bow of the crossbow was made of wood. But bows from the horns of a mountain ram are known. And already in the XNUMXth century, crossbows with bows made of steel appeared, with increased power. 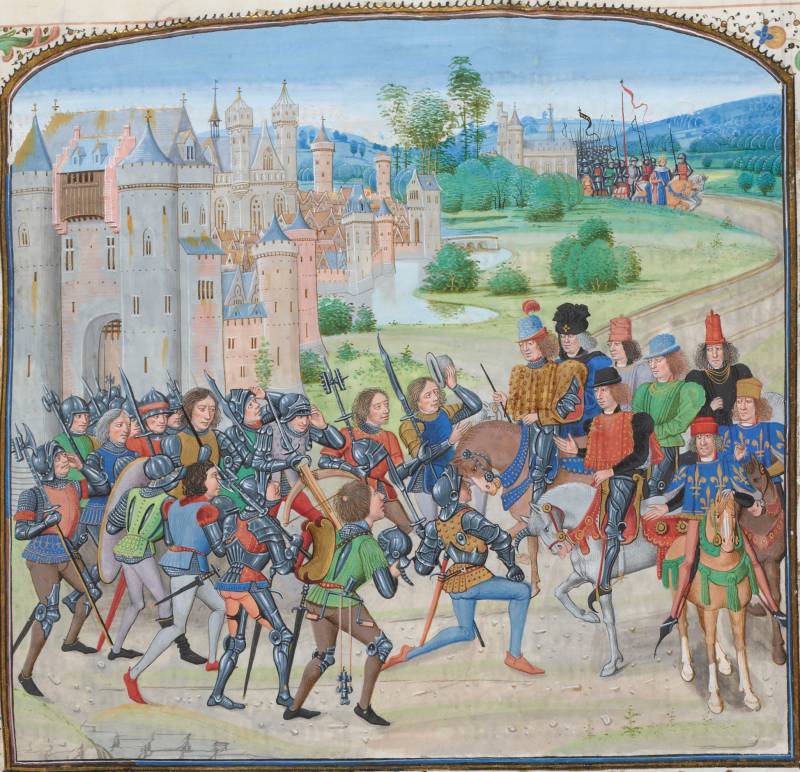 Return of Charles VI after the Battle of Roosenbeck (1382). Miniature from Froissard's Chronicles, XNUMXth century In the foreground is a crossbowman with an "English collar" on his belt. National Library of France
In the XNUMXth century, firearms began to gradually displace crossbows from military arsenals in Europe, where they are used mainly for hunting (mainly for birds) and for shooting at targets. 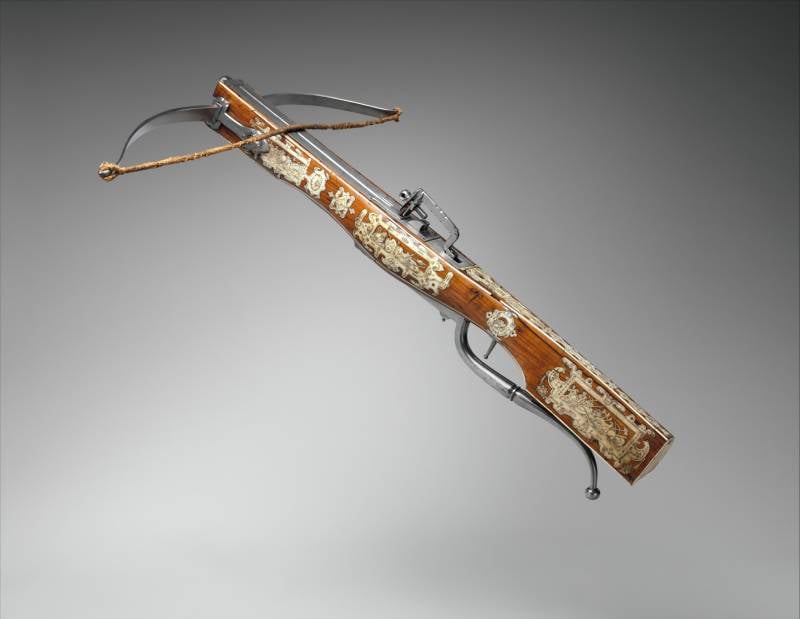 Universal crossbow-ballester for bullets and arrows in combination with a match gun. Manufactured approx. 1570-1600 The polished and engraved antler inlay depicting trophies of weapons is based on sketches by Jacob Floris (1524-1581) published in Antwerp in 1564. The bow was later replaced with a new one. Metropolitan Museum of Art, New York 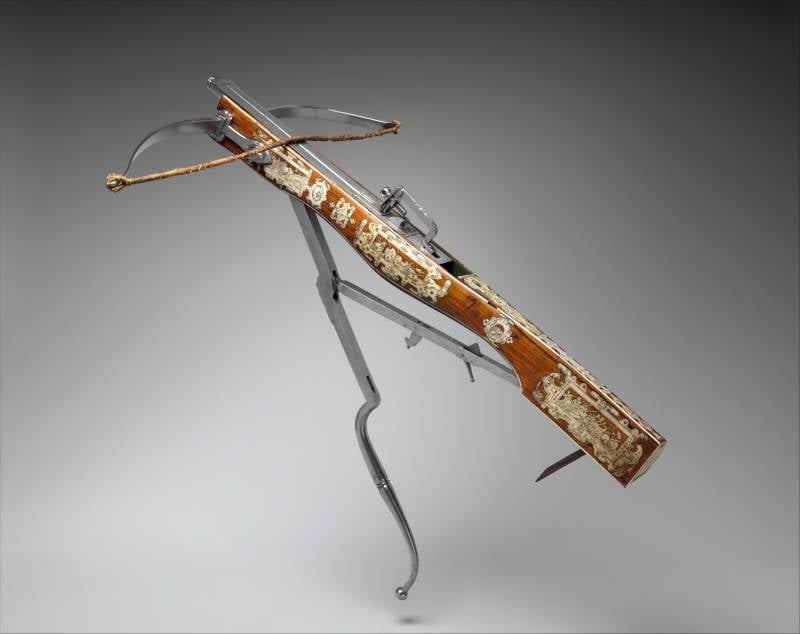 But in this way the bowstring was cocked on it. All later systems with a shutter control using a lever under the forend could well have been based on this particular design. Metropolitan Museum of Art, New York
At the same time, even hybrid types of weapons appeared, that is, a crossbow combined with a match or wheel musket. It is clear that such weapons were ordered by the craftsmen solely for the amusement of the nobility. And such systems did not have much significance. But they developed the craftsmanship of their manufacturers.

1894-1895 The Chinese use multiple-shot crossbows in the war with Japan.

1914-1918 Homemade crossbow grenade launchers are used in the trenches of the First World War.

Interestingly, the very principle of imposing the bow on the stock all this time remained practically unchanged, but the mechanism of the bowstring tension was subjected to changes, which was clearly associated with an increase in the power of the bow.

So, the same gastraphet of the ancient Greeks was cocked due to the fact that the shooter rested it on something hard and leaned on its support with his stomach (hence, by the way, its name).

The Romans also knew the crossbow, they called it the Solenarion. However, the bowstring was pulled in it by hand. Therefore, its power was low. And because it was used mainly for hunting. By the way, in Ferdowsi's poem "Shah-name", the crossbow is mentioned as a weapon specifically for hunting.

First, the crossbows were pulled with belt hooks, a winch with a chain hoist system. And in the XNUMXth century, the so-called "goat's leg" also appeared - a lever that was fixed on the stock of the crossbow and pulled the bowstring back. Crossbows of this system were faster than those that were pulled with a winch. But they were weaker. 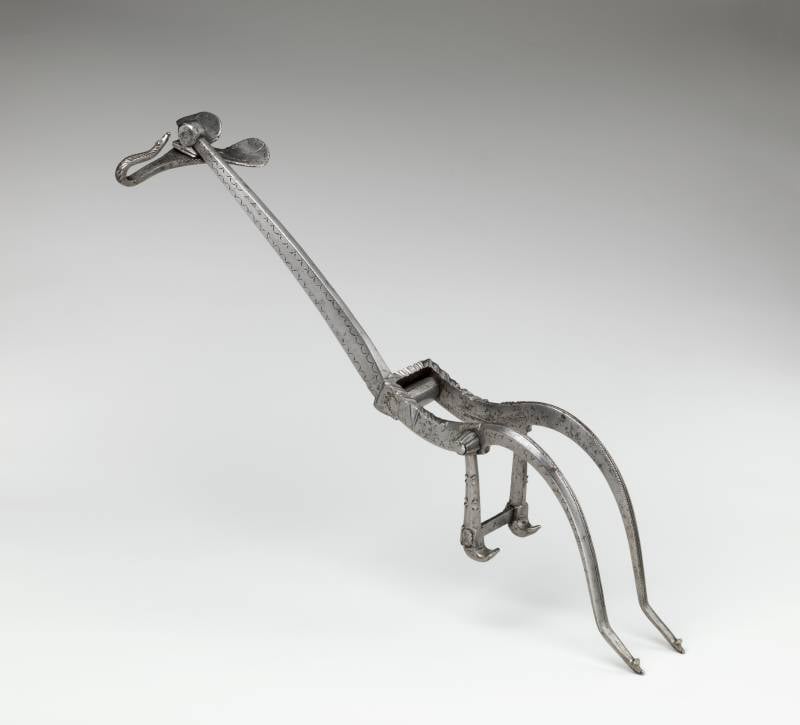 "Goat's Leg" of the late 49,8th - early 713th centuries. Length XNUMX cm.Weight XNUMX Metropolitan Museum of Art, New York
In the XNUMXth century, ballester crossbows spread, firing lead (as well as clay) ball bullets. A cup was fixed on the bowstring for such a bullet, and instead of a nut, their trigger was equipped with a vertical descending rod that entered into a loop on the cup. 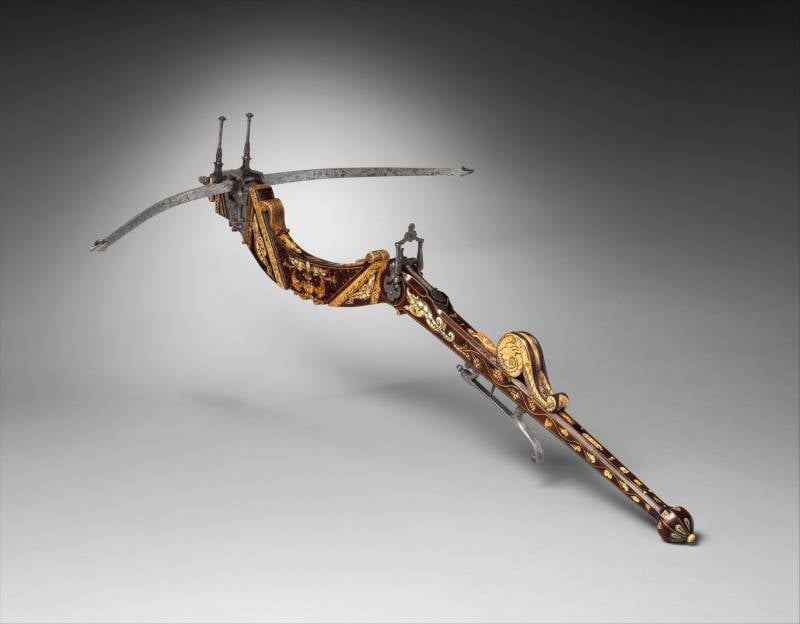 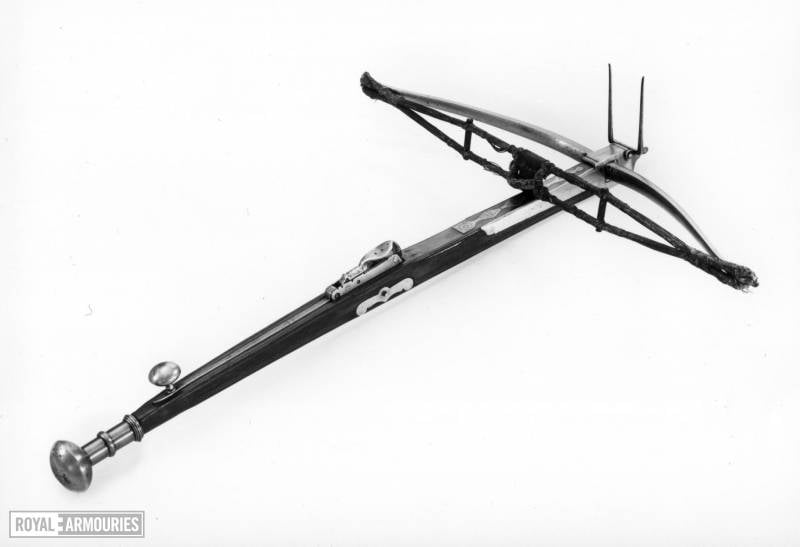 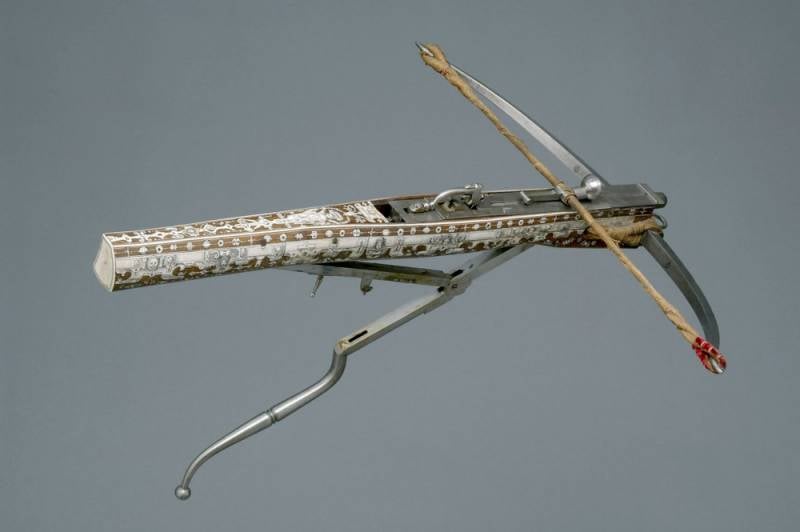 Hunting ballester 1580. Also with a lever mechanism under the stock. Such crossbows did not require a "goat's leg" or a winch. Metropolitan Museum of Art, New York
But around 1450, the so-called "Nuremberg gate", a kranekin or "spinner", appeared, representing a removable device for tensioning the bowstring of a bow of a crossbow of any strength. And this immediately pushed the creators of crossbows to develop not only large and powerful crossbows - powerful due to the size of the bow, but also small ones, but with a bow made of steel.

Very small crossbows appeared (they were called cranekin) especially for riders, which they could load without getting off the saddle. And immediately, detachments of mounted crossbowmen appeared on the battlefield, which had not been before, shooting at the enemy's horsemen and infantry from a distance. There was even a post of "great master of crossbowmen", the second most important in France after the great constable. 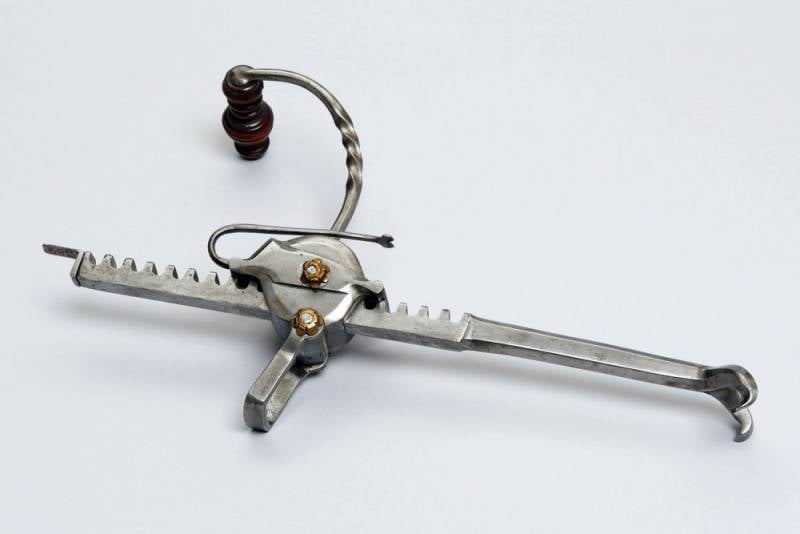 "Nuremberg Gate", made between 1508 and 1519. Belonged to Emperor Maximilian I. Kunsthistorisches Museum Vienna, New Castle, Court Hunting and Armory 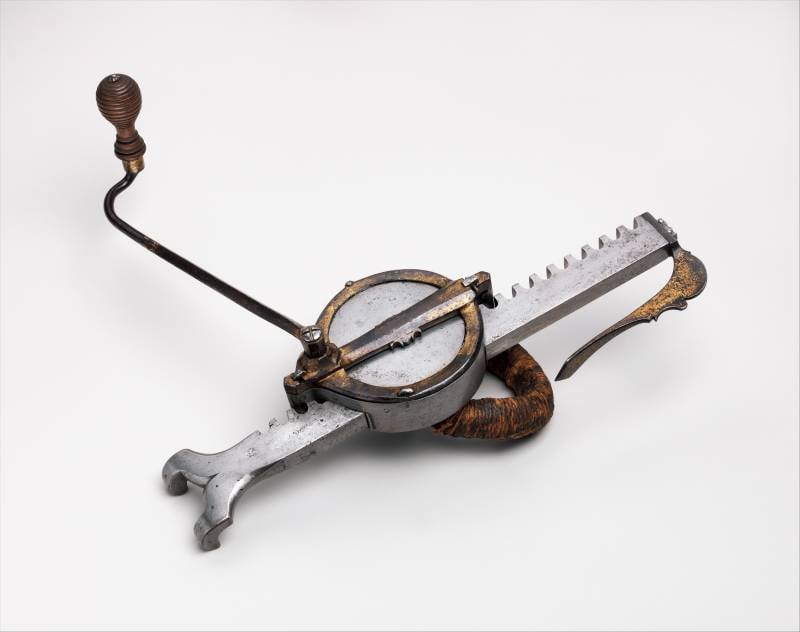 Big cranekin. OK. 1575-1650 Presumably Saxon. Material: steel, wood (probably plum), copper alloy, gold, hemp, textiles (probably flax). Length 47,1 cm. Weight 5,838 g. That is, this auxiliary mechanism weighed more than a modern rifle with cartridges. But in addition to kranekin, the crossbowman also needed the crossbow itself, and then a quiver with arrows. Metropolitan Museum of Art, New York
So in 1550, both the crossbow and the rider's wheeled pistols both in complexity and in their fighting qualities were about the same level.

And, nevertheless, the crossbows were supplanted by the firearms.

Charles IX, King of France 1560-1574 completely eliminated the crossbow from military equipment, declaring that it, as a weapon, had become useless. And he invited all archers and crossbowmen to arm themselves with arquebus.

The bow survived in the English army until 1595. And it was also canceled.

Well, the reason, I think, is clear. Caring for a crossbow was more difficult than caring for a pistol or musket. And arrows took up more space in equipment than gunpowder and bullets. It was more difficult to activate it, for this anyway, physical strength was required. Whereas the arquebus was enough just to raise, aim and pull the trigger. In addition, the same "Nuremberg gate" was a rather heavy and metal-intensive product.

And again, it was the crossbow that prompted the gunsmiths the idea of ​​a rifled weapon, because many crossbows even then fired arrows rotating in flight. And this rotation of them significantly increased the accuracy of hitting the target.

But hunting crossbows were produced and used for a very long time. And they became real works of weapons art. 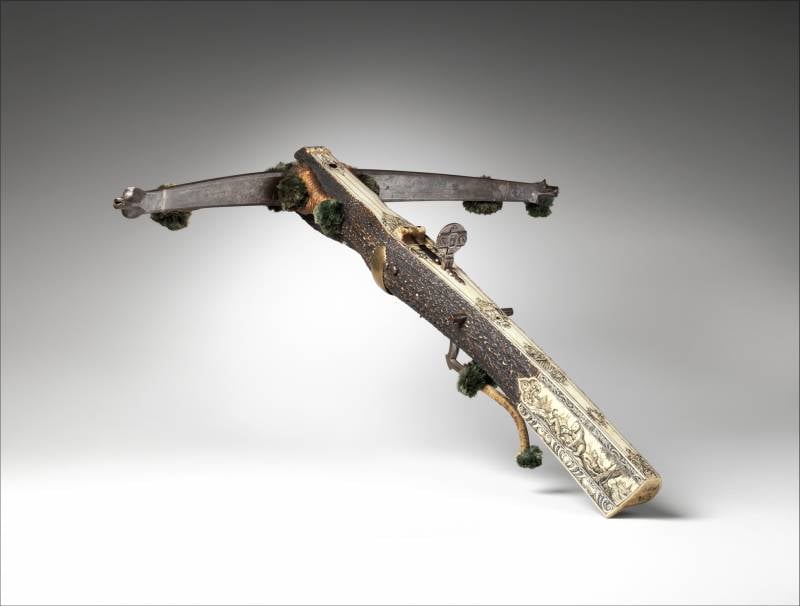 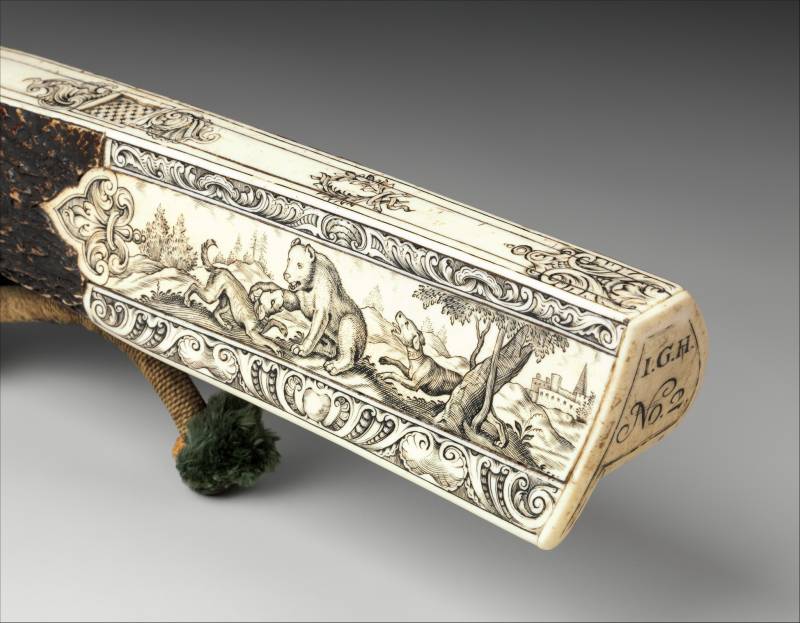 The buttstock of this crossbow has a hunting scene engraved on the bone. Metropolitan Museum of Art, New York
And, of course, as noted above, arrows were required for crossbows. And they were much more difficult to manufacture than simple lead bullets.

In addition to shafts of the same thickness and weight, it was required to forge steel points, "squares", as the arrows called them. Although the tips were very different in use, including in the shape of a reverse crescent. All this made the use of crossbows more expensive compared to firearms, without giving much benefit.

Both crossbows and muskets were fired in 1550 at about 1-2 rounds per minute. 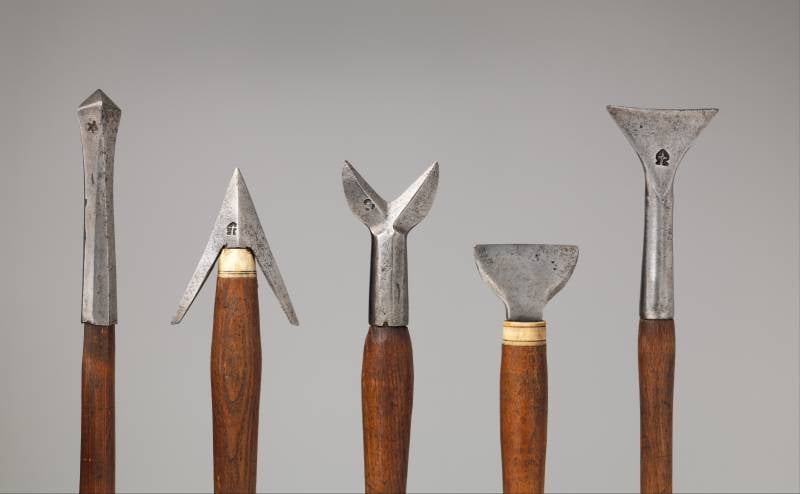 Arrowheads for a crossbow. Metropolitan Museum of Art, New York
To be continued ...