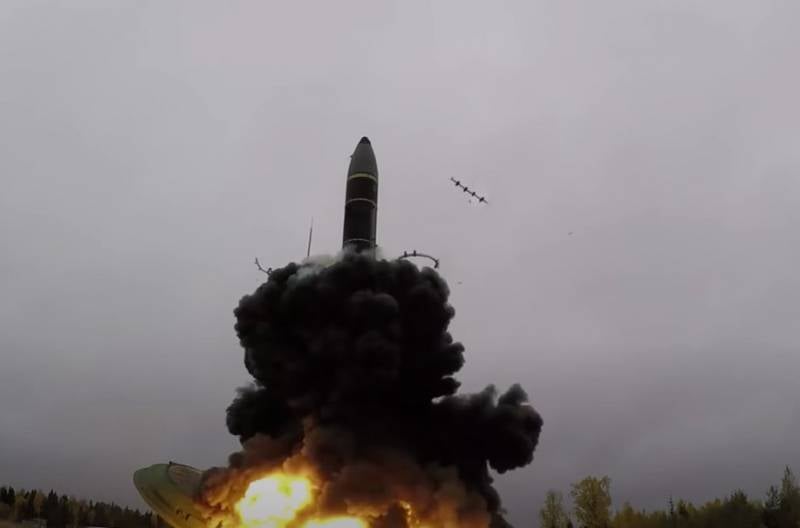 An article was published in the American media, which examines "the real prospect of a clash of nuclear powers." Bill Gertz of The Washington Times writes about this. Hertz's article is a response to the material of the American Admiral Charles Richards, published in the scientific journal of the US Navy Institute.


The American admiral writes that at the first stage after the end of the Cold War, it seemed that the very possibility of a nuclear collision was left behind. But as Richards adds, now that confidence has faded.

In the past, there is already the very hope that a nuclear conflict is improbable.
The American admiral notes that the situation is following a path in which a nuclear war with Russia or China becomes quite possible. Richards notes that if you do not take any measures, then it will come to the use of nuclear weapons. The admiral writes that this can happen if armed conflicts with the use of conventional weapons directly threaten the opponents of the United States (we are talking about China and Russia). At the same time, the admiral does not specify which conflicts he has in mind.

I propose to change the concept that the Pentagon is used today. Move from the thesis about the impossibility of nuclear war to the thesis that nuclear war has become a real prospect.
If the concept is reformatted in this way, then, as the American military expert writes, it "will help the Pentagon to better respond to possible challenges, including those that clearly threaten the very existence of the United States of America."

The Washington Times notes that 10-15 years ago, the very discussion of the issue of a probable nuclear war would have seemed like "conspiracy and a game of a sick imagination." But today this has become possible.
Ctrl Enter
Noticed oshЫbku Highlight text and press. Ctrl + Enter
We are
Reports from the militia of New Russia for 27-28 September 2014 of the yearDecember 2010 years. Russian March. Senseless and merciless? Notes not a Russian person
Military Reviewin Yandex News
Military Reviewin Google News
118 comments
Information
Dear reader, to leave comments on the publication, you must sign in.