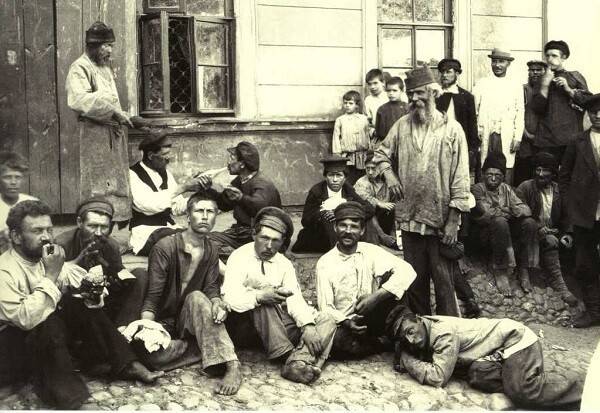 Beggar settlers. Very often in pre-revolutionary Russia settlers were begging. Newspapers wrote a lot about the hardships and hardships associated with resettlement, and many took advantage of it. “The horse has fallen, the cow has died, the wife and the children have died ... This is how it is in resettlement! Give it, for Christ's sake! "

"But to the poor you be lenient and do not delay in charity to him."
(Book of Sirach 29,11)
- Give, good man, in the name of Allah! -
the beggars were nasal, showing Hodja Nasreddin their deformities and ulcers.
He answered angrily:
- Get your hands off. I'm no richer than you and I'm looking for myself,
who would give me four hundred tangas.
Beggars, taking these words for mockery,
showered Hodja Nasreddin with abuse.
("The Tale of Khoja Nasreddin" L. Soloviev)
Charity in pre-revolutionary Russia. There was another very important component of charity in tsarist Russia - the fight against hunger. So, 1891 turned out to be a terrible crop failure for Russia. The Nizhny Novgorod, Simbirsk, Saratov, Ufa, Penza, Tula, Kazan, Orenburg, Tambov, Ryazan, Voronezh and Vyatka provinces have suffered greatly.

In view of this disaster, the government organized the supply of winter seeds to the needy population to ensure the future harvest. The Office of the Holy Synod and the Russian Red Cross Society have been actively involved in this. In many provinces affected by crop failure, including Penza, provincial committees were created to collect donations for the benefit of the population affected by crop failure.

"Vedomosti of the Penza Diocesan Committee" testifies that the sums in favor of the victims of the poor harvest were received in the period from September 16 to October 15, 1891. It is noteworthy that the funds came not only from Penza benefactors.

2. Collected during church services in plates and mugs at churches 234 rubles 61 kopecks;

3. Donations received from persons outside the Penza province: from the wife of Senator M.P. Shakhova 25 rubles, from A.N. Pleshcheev 499 rubles 37 kopecks;

4. Sums donated by His Grace, the Governor of Penza and individuals living in the city of Penza nobles, merchants, persons of other classes and various institutions are 2 rubles 039 kopecks.

And in total until October 15, 1891 donations were received in favor of the victims of the crop failure 12 rubles 549 kopecks.

Of these, it was spent:

1. Issued to the Penza City Mayor N.T. Evstifeev for the purchase of 1 poods of rye for distribution to the needy residents of the Penza province who suffered from a poor harvest 200 rubles;

Issued to the treasurer of the Penza House of Bishops, Hieromonk Nifont for payment to the office of the Syzran-Vyazemskaya railway, for 11 poods sent 20 pounds of rye rusks, 7 rubles 24 kopecks.

A total of 1.105 rubles and 24 kopecks were spent ”.
The total funds received by the Executive Food Committee in the period from July 21 to October 15, 1891 were 1 rubles. For the maintenance of the city public free canteen 168 rubles 448 kopecks. In addition to monetary donations, there were food donations, which from December 9 to 1, 15 amounted to: flour 1891 poods 831 pounds, peas 2 poods, from the merchant Krasilnikov 50 poods of flour.

We must not forget about such a purely military direction of pre-revolutionary charity as helping the wounded. The development of this direction was strongly influenced by the Russo-Turkish War, which began in 1877. Penza, for example, took 349 wounded to charity hospitals. Archival documents show that

“The patients were supplied with medicines from the pharmacy located at the zemstvo hospital, while food was received from the hospital kitchen ...

The Red Cross hospitals, both in the eyes of the whole society and, according to the opinions of those specially sent to examine them, stood in all respects above the military hospitals.

For example, at the request of Pavel Petrovich Arisov, a retired corporal of the 213rd Infantry Company, a peasant of the Penza province from the village of Koromal, he was assigned an allowance for the purchase of a cow, because

"…P. Arisov participated in the Russian-Turkish war and fell ill: a disease of the left hand, the lower jaw of the right side, ear aches on the right side and noise in the head, and also suffers from eyes, is not capable of physical labor, the family consists of their wife and three small children, is in extremely poor condition and cannot buy money for a cow by his labor. "
Now imagine what a cow is in the then peasantry? It was not for nothing that they called her “Mother Nurse”. And this peasant got it.

The attitude of the government to ... the intensive enrichment of the monasteries was very interesting, which even caused him displeasure! The government believed that in the presence of significant funds, the monasteries should donate a certain part of them to charity. Thus, it would be possible to reduce the costs of the state treasury. And to show that the monks are trying by all means to bring relief to the people. This is a very logical, and I would say, quite modern judgment, although it took place long before 1917.

Thus, the Penza monasteries, which were considered far from prosperous, in 1894 possessed land plots in the amount of 10 dessiatines, and the capital of many monasteries exceeded 000 rubles. In this regard, the spiritual department demanded that the monasteries urgently fulfill the following tasks in the field of social protection:

1. Provide shelter to all the disadvantaged.

3. To cede part of the premises for the elderly, often deprived of shelter and a piece of bread.

According to the definition of the Synod of August 21, 1891, the richer monasteries and churches must give cash benefits from their funds to the needy and not stop feeding the poor.

Also, the Bishop of Penza gave the following proposal for the consistory:

“In the name of Christ the Savior, who even miraculously nourished the hungry and commanded us to nourish the hungry, invite men and women to monasteries:

a) where feeding the strange and the poor would not stop and not reduce those, but, on the contrary, expand;

b) regardless of this, admit 5 boys to male monasteries, and 5 girls to female monasteries, in addition to the existing ones, mainly from orphans and children of the clergy.
This provision was binding. And it was sent to all the monasteries of the Penza province.

Fulfilling this provision, during the year the abbots of the monasteries sent reports to the consistory, according to which 28 boys, 77 girls and 11 homeless old women were accepted for maintenance. The total number of people living off the monasteries was 116. Children were taught the necessary knowledge. In addition, free canteens were opened in the monasteries, serving up to 500 people.

For example, in the monastery canteens of the Penza Trinity Convent, 20 people were fed. In the Paraskevo-Ascension nunnery - from 50 to 90. In the Mokshansk Kazan nunnery - everyone comes. In the Nizhny Lomovsky Assumption Convent - 10 people. In Kerensky Tikhvinsky - 90 people. There are 30 people in the Kovyliai Trinity Community. There are 50 people in the Chufarovsky Trinity Convent.

And now imagine how many needy people were fed in this way in monasteries all over Russia... And the numbers are not small.

So what? With the closure of monasteries and churches, did the Soviet state begin to feed all these people?

It was simply impossible to plug such a "hole" in the early years of Soviet power. Subsequently, all funds were spent on industrialization, collectivization, the army and navy. So our people had to simply forget about such feeding. They were not organized even during the famine of the early 30s.

In the cause of charity, the monasteries received some support from the Diocesan Committee. Such support went depending on the income of the monastery and on how many needy charitable institutions were opened in them.

Among the monasteries, only one Penza Transfiguration Monastery in the amount of 145 poods of flour received benefits. In the monastery, 30 people were constantly fed, and they received only 1,5 pounds (a little more than 600 grams) of flour per person and nothing more. That is, they fed them bread and stew, but that's all. And bread was not given in abundance. However, if a person did not have any food at all, then this was helpful to him.

The next activity of the monasteries was the creation of shelters, hospitals and almshouses.

So, there was a practice of living in monasteries of a small number of crippled, paralyzed and other "weak" people. They generally lived as novices, but did not obey. Also, monks and novices who, due to old age or illness, could not benefit the monastery, were freed from obedience and lived on the full support of the monastery.

So, in 1881 in the "Bulletin of the monastics of the Krasnoslobodsky Assumption Convent" it was reported:

“There were those dismissed from obedience because of old age and poor health: nuns - 5; cassock novices - 6; sloppy novices - 4; living on the test - 10 ".
In Krasnoslobodsky Trinity Convent, 8 people were freed from obedience (without explanation).

It should be noted that the monks with great zeal provided spiritual assistance (to pray, serve a panikhida, donate something from cult accessories), but when it came to financial assistance, various problems arose here.

By the way, in the same Penza State University today, such scholarships are also established, as well as rector's grants to students for particularly interesting research. And these are really interesting developments of students (was present at their consideration).

So you need to understand that the system of assistance to those in need in tsarist Russia differed from the Soviet one, first of all, in its social character.

In the USSR, all aid was state aid.

The public was left with the opportunity to show compassion, perhaps by giving some old woman 10 kopecks. There was no patronage, no sponsorship and private charity, no philanthropy - none of this happened. The state ruled everything.

And in some ways it was good, and in others it was bad. The system was inflexible.

But today we have all the same types of charitable assistance that were in tsarist Russia. Plus the state system of providing assistance to those in need.

Perhaps only now we have come to an optimal combination of both private and public.

Some may want to deepen their knowledge of this topic. So here is a list of references, including dissertation research:

However, this is not all.

And we will tell you about one interesting aspect of protecting the poor population of the Russian Empire.