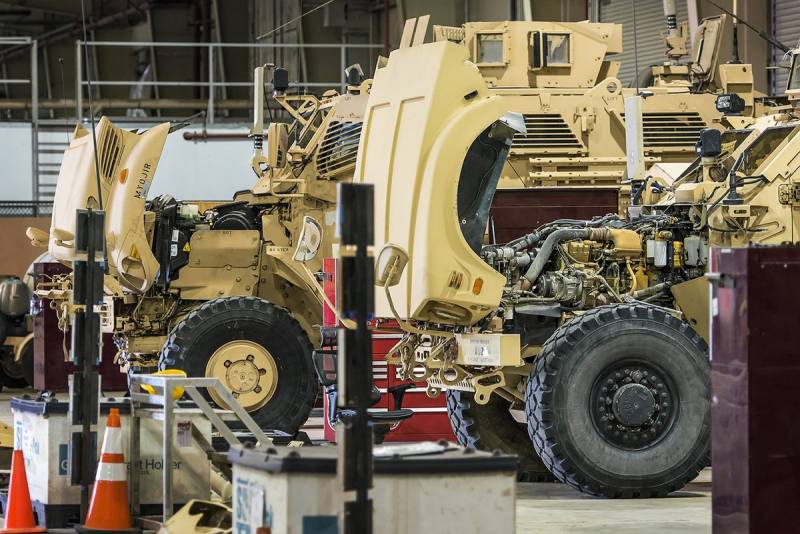 The Center for Strategic and International Studies (CSIS), based in Washington, has released a study on the capabilities of the US military-industrial complex and industrial mobilization in the event of a large-scale high-intensity military conflict. The research institute notes that interest in this problem is returning against the backdrop of a shift in the strategic focus of the United States on competition with the great powers.


The study shows that it will take many years even to replace the existing US military reserves while increasing the pace of military production and transferring the economy to a war footing. It is unlikely that it will be possible to solve the problem in the near future, since after the end of the Cold War, the industry underwent a serious restructuring, excess military capacities simply disappeared. According to the researchers, the US Navy will face the greatest difficulties in the event of a major war, since every ship lost during the conflict will become, in fact, irreplaceable.

Feature of the US military budget

"A gift for Russia and China",
directs large resources to the country's military-industrial complex.

In 2021, US military spending will be $ 740,5 billion. The allocation of funds is as follows: 635,5 billion for "basic needs", 69 billion for emergency operations abroad, and 26,6 billion for various national security programs.

A distinctive feature of the huge US military budget is its social component and infrastructure costs. Not all of the allocated funds go to the military-industrial complex. The country must always compete with Russia and China. The United States is hostage to its own strategy with the deployment of a huge number of military bases around the world. 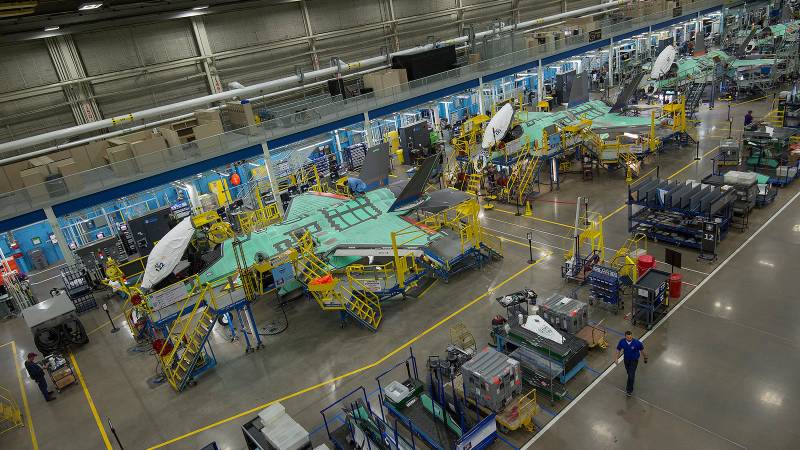 Assembly of fifth generation fighters F-35
According to Grigory Tishchenko, an expert on defense policy at the Russian Institute for Strategic Studies, up to 40 percent of America's entire military budget is spent on non-production expenditures - on wages for military personnel, pensions for veterans, maintenance of military hospitals and base infrastructure. He shared this observation with the Expert Online publication. The remaining 60 percent is used by the Pentagon for its intended purpose.

Russian experts traditionally consider US military spending to be overstated and inflated, and the growth rate of the country's military-industrial complex is inappropriate. In the US, hardly anyone will agree with them. So the Center for Strategic and International Studies in Washington notes that the capabilities of the American military-industrial complex to replace weapons and military equipment have significantly decreased since the end of the Cold War and continue to decline today. The industrial base is becoming more and more fragile, and the average time to replace existing stockpiles has grown from 6,6 years in 1999 to 8,4 years in 2020.

Years to replace the main weapons

In the CSIS study, experts assessed the capabilities of the US military-industrial complex, including through the mobilization of production capacities and the ability of the country's industrial complex to work in conditions of a prolonged conflict between major world powers.

Researchers have calculated how long it will take for the American military-industrial complex to replenish its current stocks of basic weapons and military equipment.

On average, the American economy will need 8,4 years to replace the main types of weapons. At the same time, the variability of the replacement time is very large. From 2,3 years for various mission support equipment, auxiliary equipment for logistic services, to more than 20 years for large ships. On the positive side, weapons with civilian counterparts can be replaced faster. For example, various wheeled vehicles can be upgraded at a rate of 3,3 years.

The above values ​​are typical for the maximum mobilization of the American military-industrial complex. When working according to the 1-8-5 scheme (1 shift, 8 hours a day, 5 days a week), the average replacement time for the main types of weapons and military equipment will grow to 13,8 years. But even with the transition of the economy to a military track with an increase in the number of shifts to two or three per day, it will not be possible to achieve a multiple increase in productivity. Here, the military-industrial complex is faced with a shortage of machine tools, equipment and trained specialists.

In addition, modern weapons are extremely complex and require the work of a huge number of contractors, which can also be scattered around the world. An analytical article by CSIS provides an example of a fifth-generation F-35 fighter-bomber, in the production of which approximately 300 unique parts are used. 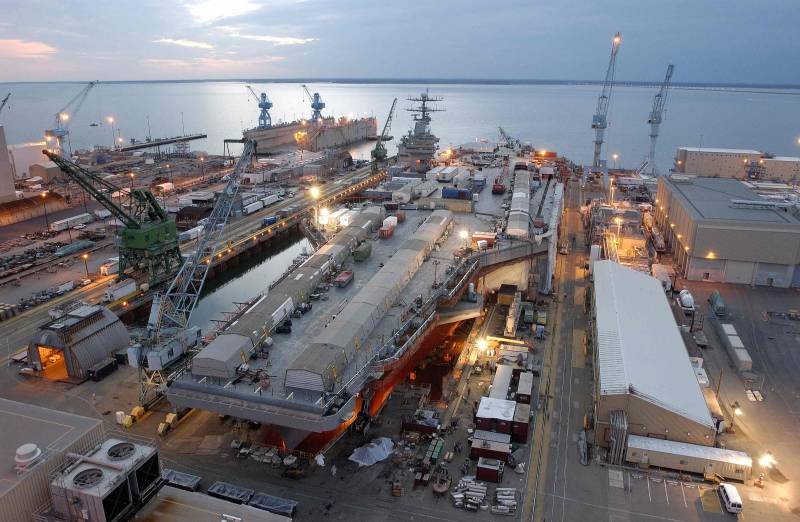 Construction of an aircraft carrier of the "Nimitz" type
When the United States ousted Turkey from the F-35 fighter program due to Ankara's purchase of Russian S-400 air defense systems, the Americans had to look for replacements for parts produced in Turkey. In total, about a thousand different components for the F-35 fighter-bomber were produced in Turkey. Washington spent several years on their complete replacement and search for alternative suppliers.

The most difficult situation is observed in the field of shipbuilding. The construction of warships is a very time-consuming process that requires colossal costs and efforts from industry, far exceeding the costs of producing other weapons systems and military equipment. The CSIS notes that the rotation times here vary significantly - from 11 years for replacing supply ships, to half a century when it comes to replacing all 11 aircraft carriers. For submarines, the replacement period is estimated at 20 years, for large surface warships - 40 years.

The replacement time for even one ship is so long (3–8 years) that, in fact, any US Navy ship that is lost during hostilities is unlikely to be replaced until the conflict is over. The longer the large-scale military confrontation of the major world powers continues, the smaller the fleet will be.

So in 2019, the United States had only one shipyard where nuclear aircraft carriers could be built and repaired. This is a shipyard in Newport, Virginia. There are three slipways here. Two slipways are usually occupied by aircraft carriers undergoing medium or major overhaul, and one is used to build new ships. In peacetime, this is not critical, but in a full-scale war it can become a big problem. Since the failure of any of the aircraft carriers or the shipyard itself will be a huge blow to the combat capabilities of the American fleet.

In real combat, the situation will get even worse

In a real war, the situation will deteriorate significantly. Since the main task during a war is not to maintain the existing level of weapons and military equipment, but to make up for combat losses. At the same time, non-combat losses are added to combat losses from direct contact with the enemy: due to accidents, breakdowns and complete wear and tear of equipment, as well as inevitable losses from friendly fire.

The Center for Strategic and International Studies in Washington notes that it is difficult to predict the combat losses of weapons in a conflict between states with comparable military resources. Fortunately, such conflicts are extremely rare. For this reason, estimates have to be based on historical analysis. 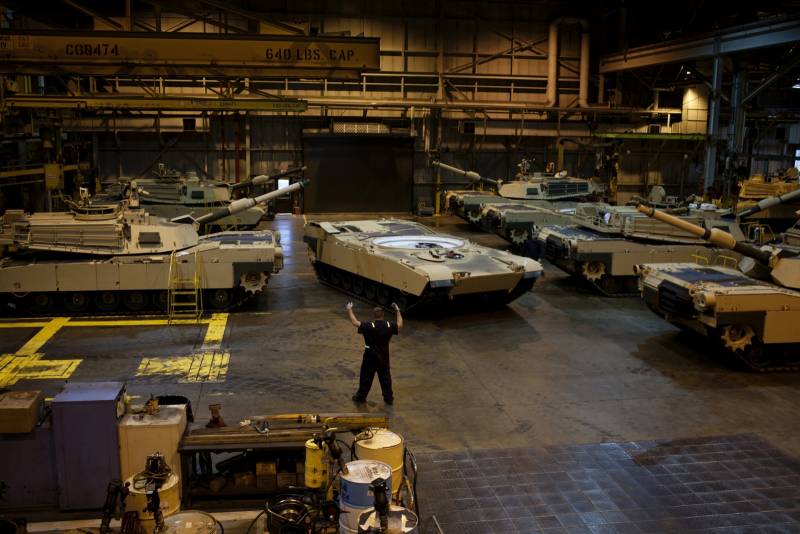 Assembling the main combat tanks M1 Abrams
As an example, CSIS looked at the loss of armored forces. For example, in the 1974 Yom Kippur War, the Israeli army irrevocably lost a total of about 400 tanks out of the 1 in stock. This accounted for approximately 700 percent of casualties per day for 1,1 days in a fading military conflict. The losses of the Arab armies were significantly higher.

Also, the CSIS article provides estimates of the losses of German troops during the Battle of Kursk. The material says that the Germans lost every day for various reasons up to 14 percent of all their tanks. The total losses of German tank forces in 14 days of battle are estimated in the article at 110 percent of the original strength. At the same time, it is especially noted that this was a time-limited battle of extraordinary intensity with the widespread use of armored forces.

Summarizing their own experience, the Americans note that the average infantry battalion of the US Army during the Second World War, being on the front line, lost 2,6 percent of its personnel per day, even without serious battles. Based on the foregoing, CSIS represents the loss of tanks in a conflict with opponents with comparable capabilities at about 1 percent per day. This includes casualties from all causes: combat casualties, abandoned during a retreat, lost in accidents or when transported to a theater of operations.

If the United States deployed all 15 of its armored brigades in the war, this would mean that the army would lose 13 tanks or 390 vehicles a month every day. At the same time, the production of tanks is estimated at only 29 vehicles per month.

Thus, after 10 months of high-intensity conflict with an equal enemy, the armored forces of the US Army could be reduced to 158 tanks, which roughly corresponds to two tank brigades.

Tank forces will remain at this level until new production facilities are deployed.

Ctrl Enter
Noticed oshЫbku Highlight text and press. Ctrl + Enter
We are
Situational analysis of the death of the MH17 flight (Malaysian Boeing 777), made on the basis of engineering analysis from 15.08.2014Strangulation: the context, conduct and consequences of the American naval blockade of China
Military Reviewin Yandex News
Military Reviewin Google News
95 comments
Information
Dear reader, to leave comments on the publication, you must sign in.